Over the last few weeks, we have had a few things to say about the underperformance year to date from stocks in the banking sector (read here and here).  On the desk on CNBC’s Fast Money we have been hotly debating the bullish thesis on the bank stocks, with specific focus on the results of the Federal Reserve’s annual stress tests on the banks that was released last night and giving guidance to each bank on how much capital they can return to shareholders in the form of buybacks and dividend to remain above the minimum capital requirements by the regulator. Here was our discussion from last night, I think I am pretty clear that despite the poor price action in the group, the known catalyst and the generally positive sentiment among the pundit class, that if these stocks can’t rally after the results, they are dead, watch here:

So here we are, the news is out and I think it is safe to say that today’s price action, with the XLF, the S&P Financial Sector Select etf up less than 1% is downright awful. For those looking out to Q2 earnings and expect the sentiment to continue, and for investors to continue to sell rallies, then I think it makes sense to target either Morgan Stanley (MS) or Goldman Sachs (GS) both of which did not come out of the stress tests unscathed, leading the Wall Street Journal to say: Bank Stress Tests Don’t Instill Confidence and Goldman Sachs, Morgan Stanley Dinged in Fed Stress Tests

Goldman Sachs and Morgan Stanley, which each fell below the minimum capital levels set by the Fed, were blocked from raising their total payouts but were cleared to distribute roughly what they had over the past year or so.

The problem for these two Wall Street giants wasn’t a hypothetical trading blowup or loan losses, the Fed said, but rather the effect of the 2017 tax overhaul, which created a one-time hit to their capital levels. In the long run, the tax cuts are a boon to big banks, generating billions of dollars in savings.

The Fed’s treatment of Goldman and Morgan Stanley—a compromise without the black eye of failure—was unprecedented and, to some bankers, a sign of an administration that is friendlier to Wall Street’s interest.

I suspect these stocks will continue to be weak into their Q2 results in mid July, and I want to focus on MS (down 9% on the year and nearly 20% from its 52-week high made in March) as I think it has a little catch up to do on the downside to its investment banking peer GS which is down 12.5% and nearly 20% from its March highs. To my eye I see little reason why an uninspiring Q2 report and Q3 guidance should not cause MS to retest its 52-week lows made in Sept near $44: 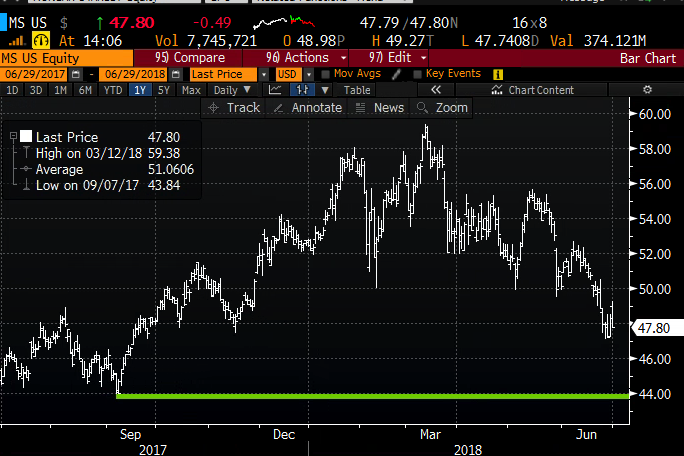 MS reports Q2 results on July 18th before the market open, the options market is implying about a $2.60 move in either direction between now and July expiration on the 20th, or about 5%, with the one-day post-earnings, implied movement at about 3%.

So what’s the trade? If you agree that MS will report meh earnings and guidance and the news from the Fed and the stock’s reaction is not likely to cause a mysterious reversal then pressing the short playing for matched 52-week lows, with defined risk makes sense.

Rationale: this trade idea is slightly in the money, offering a break-even down around 2% with a potential profit of nearly 3 to 1 if the stock is down 8% in the next three weeks.