Tomorow after the close, the Federal Reserve will announce the results of their annual stress tests, known as CCAR, that they conduct on all major banking institutions to gauge their resilience in the face of shocks and also give guidance on allowable levels of capital return to shareholders in the form of buybacks and dividends. Since the financial crisis, these results have served as trading catalysts, both up and down, as it gives a grade to a company’s health and investors like the predictability of capital return, something that was sorely lacking for years after the crisis.

What’s interesting about the trade set up this year is that despite a generally optimistic set up for bank stocks given the health of the U.S. economy, bank stocks have underperformed, with the XLF (the S&P FInancial Select etf) is down 3.5% on the year, and 12% from its post-financial crisis highs made in late January, vs the S&P 500 which is up 2% and the Nasdaq which is up 9%.

The ten largest components of the XLF make up about 50% of the etf’s weight and nine of the ten (excluding Berkshire Hathaway) will get a grade from the Fed tomorrow:

The options market is implying about a 2% move for those stocks on an individual basis between now and Friday’s close, which is fairly hefty for just two days. To put that two-day move in context, the implied movement in the XLF is 1.5% between now and Friday’s close, which makes sense because an etf like the XLF lacks the idiosyncratic risk of a single name.

Whether you think CCAR results will be a catalyst or not, investors clearly don’t want to be left flat-footed. The largest trade of the day in the XLF so far was an opening buy of 21,000 July 27 calls, paying 41 cents, breaking even at $27.41 to the upside. This seems like a fairly dollar cheap way to play for a bounce… especially when you consider that all nine of the top ten holdings (ex Berkshire) will all report Q2 earnings between now and July expiration. The options market is implying about a 3.5% move in the XLF in either direction between now and July expiration on the 20th, the third Friday of the month. The two-day move seems high, while the three-week move with both catalysts seems fair to cheap.

So we have positive sentiment, catalysts and a technical set up appears to be near crucial levels of support near-term and possibly breaking down longer term.

The one year chart below show this support at what could be viewed as a neckline of a head and shoulders top formation: 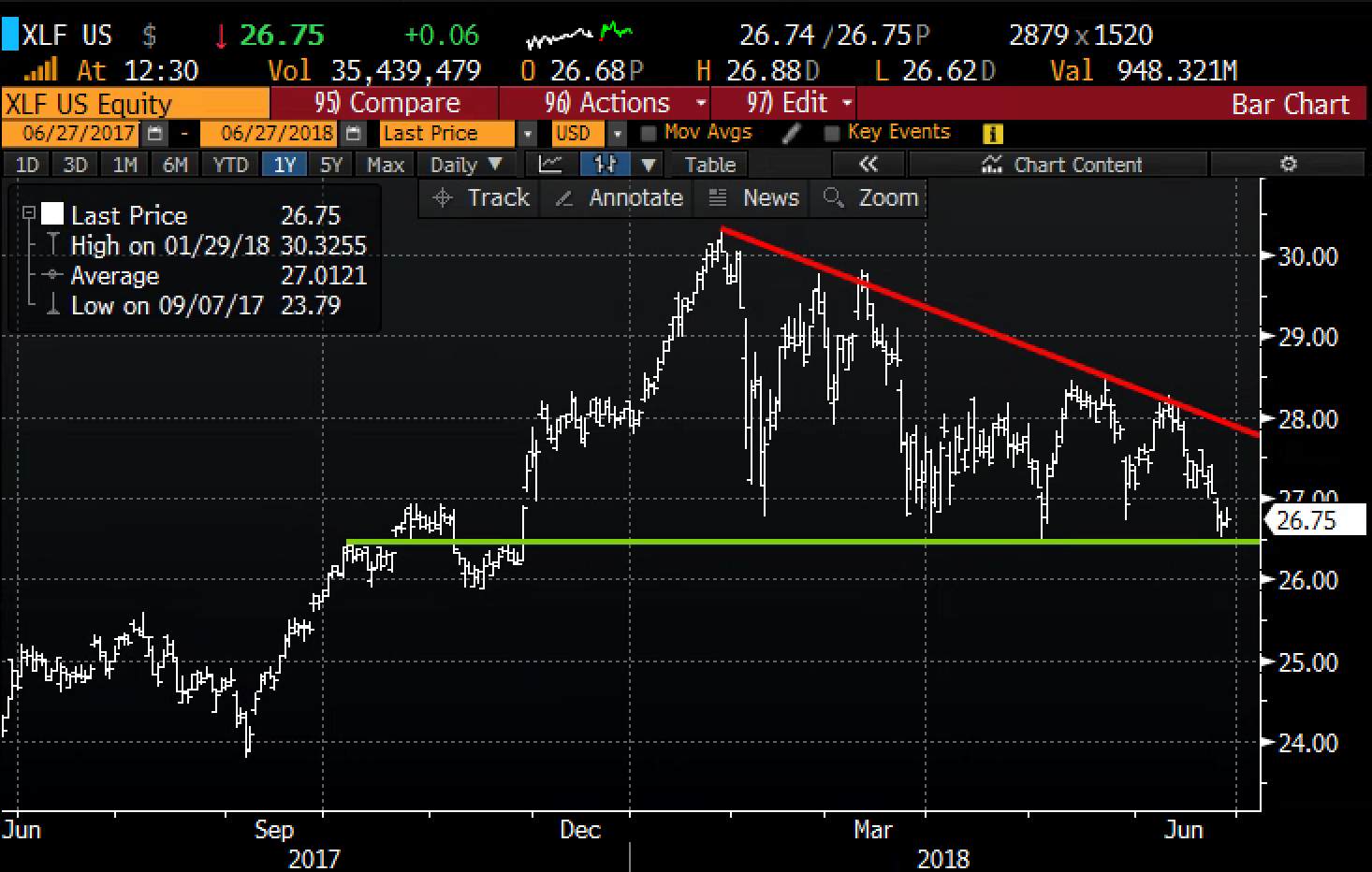 A bounce here and you likely have a ricochet back to the downtrend near $28, a breakdown and you are likely at $25.

The five-year chart shows the series of lower highs and lower lows and the etf’s break below the uptrend from the Q1 2016 lows, next major support is at 52-week low, $24: 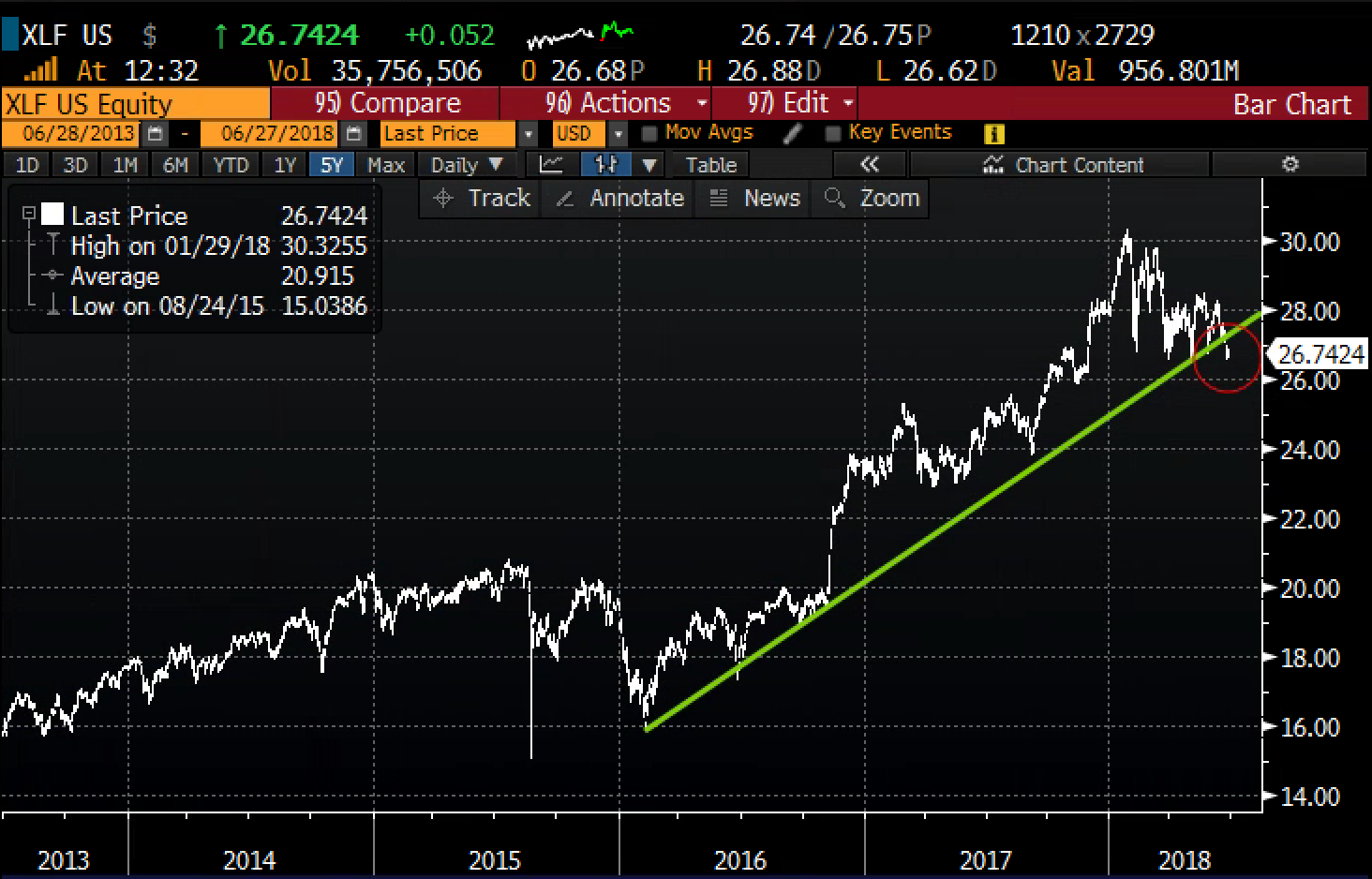 A few weeks ago when the XLF was just below $28 we laid out our bearish view (read here), and I detailed it on CNBC’s Options Action program:

Here was the trade idea from May 25th:

With the XLF at $26.55 as I write, this put spread is now worth $1.40, so a modest profit of 50 cents or ~50% of the initial premium at risk. I feel comfortable holding this, but given my thought about the at the money options in July that they are fair to possibly cheap it might make sense to roll this view down a bit and just risk the profit of the initial trade. For instance, you could sell the Sept 28/24 put spread at $1.40 and buy the July 26.50 puts for 40 cents, basically using your profit from the original trade, this time targeting the next catalyst after CCAR, which will be Q2 earnings. While this might be viewed as pressing a short after a 5% drop, it is actually managing risk. If for instance CCAR is a positive catalyst, and the sector bounces hard, you have reduced your risk to the profit in the trade.