Last Friday, my final post and thoughts for the week on RiskReversal was in hindsight a very ill-timed short biased defined risk trade idea in the XLF, the Financial Select etf (Bank Shot)

Now I don’t like to press lows, and that’s what some might feel it would be doing to take a near-term bearish view on banks, but I have had a long term bearish view on banks since the yield curve inverted last summer and I have not been in the camp that the economy was in as strong a shape as the stock market making new highs daily since late October till its recent highs in Feb might have suggested.

So if you agree with that and are looking for defined risk short exposure I think it makes sense to consider that most of the banks will be reporting Q1 earnings prior to April expiration, and I would expect their outlooks to be as clear as mud (despite posting decent Q1 results) and the stocks to make new lows in April…

Aside from being dead wrong on price in just four trading days, rereading the post, I can’t tell you that I disagree with a single word that I wrote in that post. But as they say in the trading business, Red is Rong.

The XLF as I write is $23.35 up 20%, in FOUR trading days and the April 19 – 17 put spread that I detailed last week that cost 50 cents is worth pennies, near worthless. The optimism in the stock market this week given the news on the coronavirus and the economic fallout seems simply disconnected from reality.

Last week I highlighted just how horrid the Euro Stoxx Bank Index has traded, frankly for a decade, 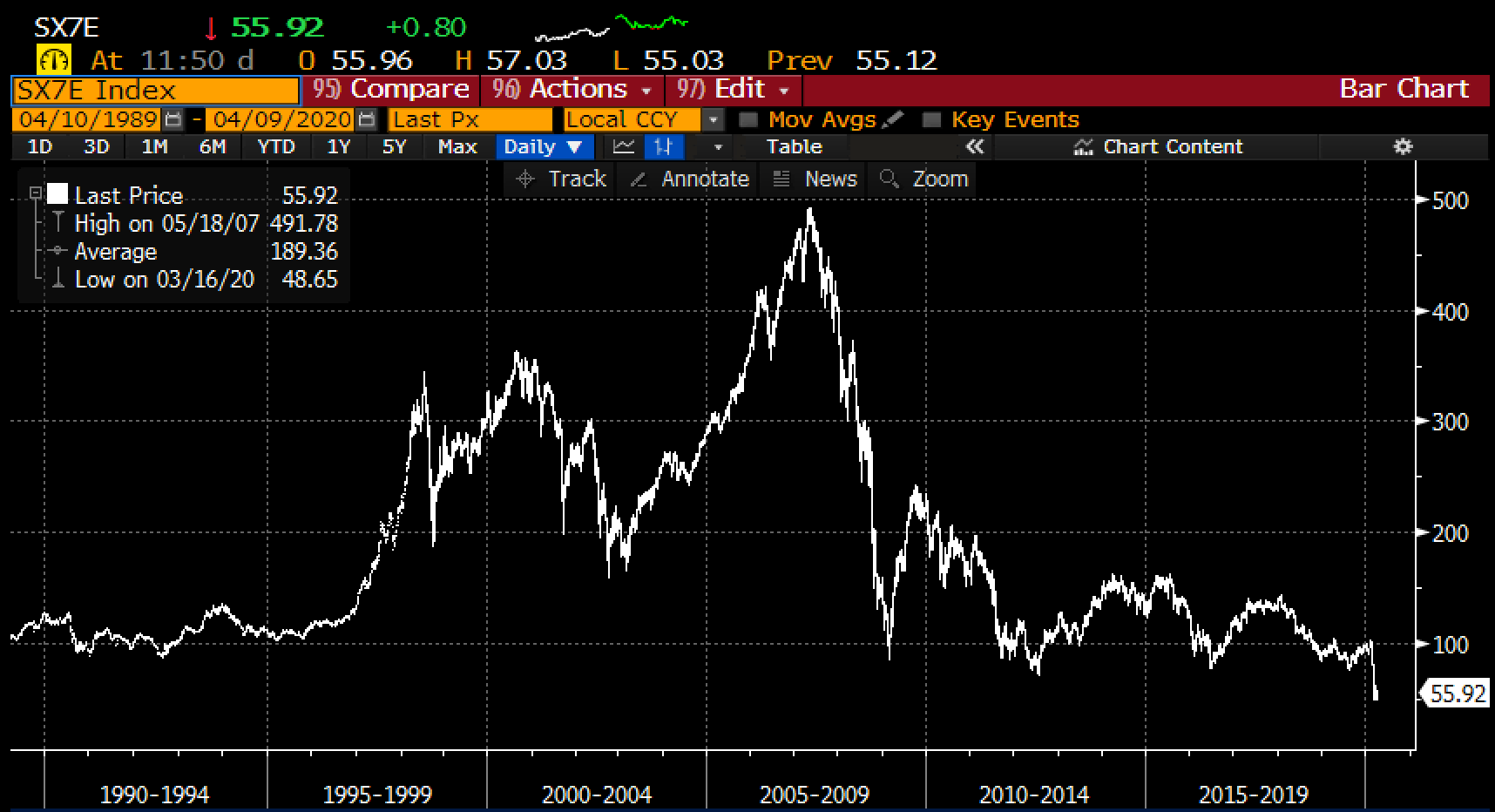 but I think it is also worth noting that the OG when it comes to bank stock horror show is of course Japan, whose Topix Bank Index has never recovered zero interest rates and eternal QE, and like the SX7E has lost more than 85% of its value since those monetary politics were put in place in the early 1990s: 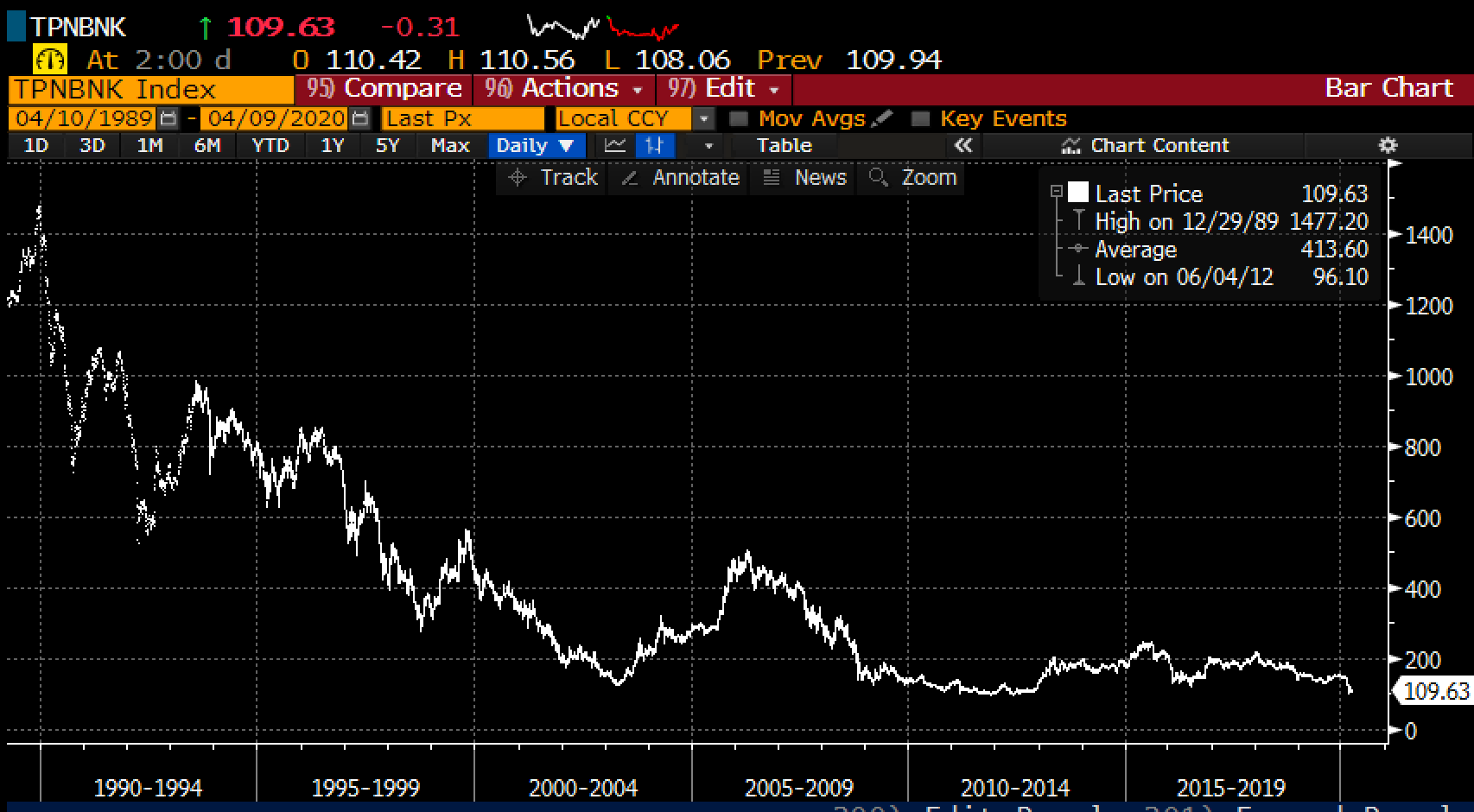 So I am really not sure what is ultimately going to be so different about our banks when you consider the near impossibility of our Fed ever raising rates again, as many think we are in a permanent MMT world (modern monetary theory), a world where we just continually print money to continue to devalue out debts. I have no idea how or when this ends, but it is not going to end well.

Back to the U.S. banks, its worth noting that every major U.S. bank CEO has done their part to tell a positive story about how they are working with the Fed to get money to small businesses and individuals as part of the relief bills passed last month, but noticeably absent has been JPM CEO Jamie Dimon who is recovering from an emergency hear condition. It’s a shame he has not been able to help set the narrative as he has earned the respect of his peers and policymakers in Washington as a guy who is willing to speak his mind and put his money where his mouth is.

Shares of JPM are massively outperforming the broad market and many peers today, up 8.5% as I write, but interestingly having hit technical resistance at the lows from last summer. While the stock is down 27% from its all-time highs made on Jan 3rd, it is worth noting that the stock did top out on the first trading day of the year, and that the move from its breakout at $120 to its highs at $140 was entirely the result of Fed adding serious liquidity by way of the three 25 basis point rates cuts starting in July and the start of “repo operations” in Sept which was essentially QE with the Fed buying $80 billion a month of fixed income assets. It will be interesting to see if JPM can try to get above near-term resistance and make a run at $120: 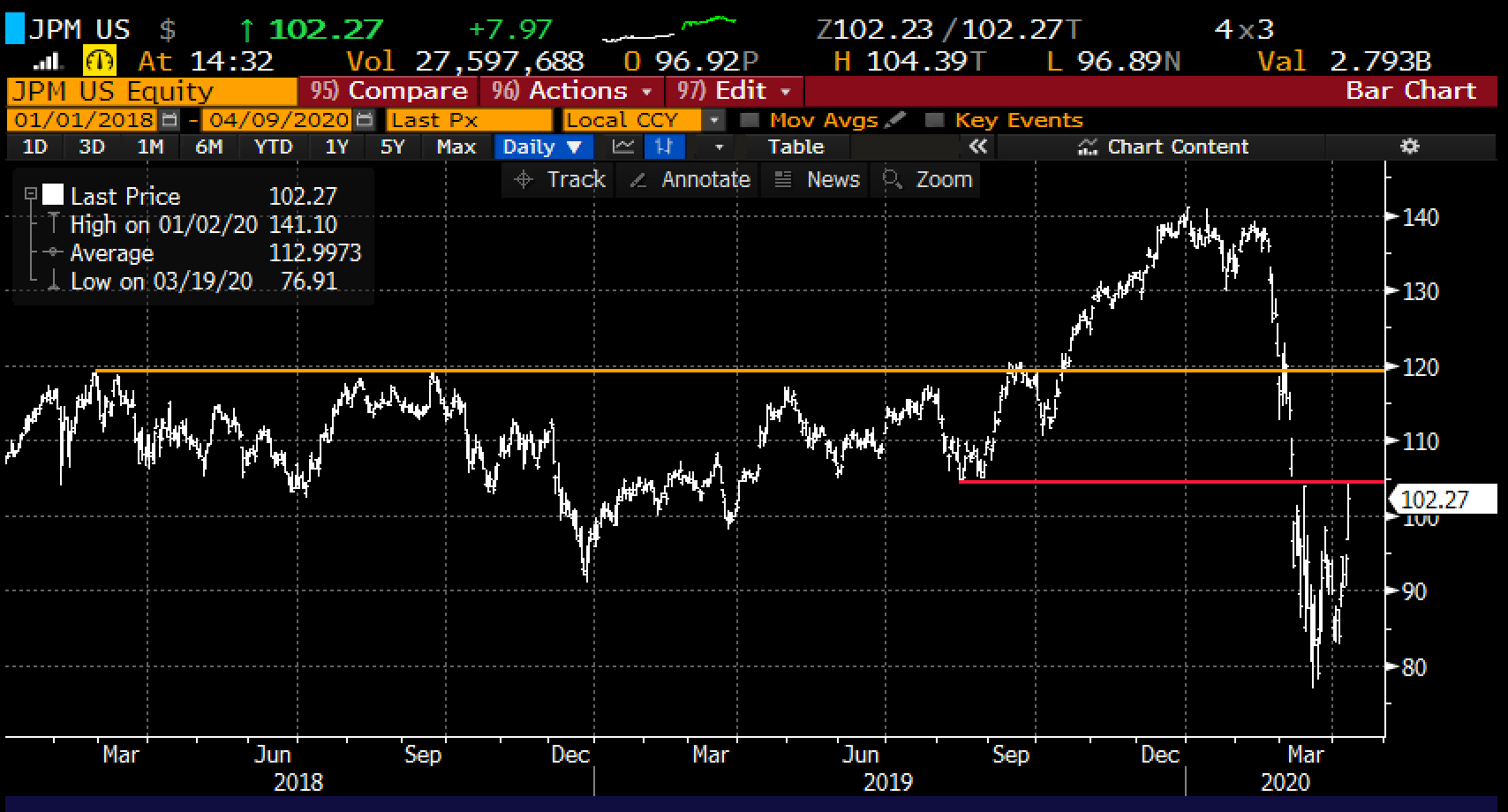 So what’s the trade? Well, I am nothing if not stubborn…

If I were looking to take one more crack at the XLF, I might consider moving the time horizon out to May, and obviously move the strikes up…