For most late February and early March, as the coronavirus was making its way around the world, most market participants and pundits were insisting that we do not have a financial crisis, but a health crisis, and to avoid the spread we will need to take some economic pain. That didn’t make much sense to me, as I wrote this morning (Approaching the Hard Deck), what’s different this time:

the economic effects will be at the very least be front-loaded as Jobless Claims hit 10 million in the last two weeks with the unemployment rate going from a 50 year low at 3.5% in February to 4.4% in March with many economists expecting to see 10% in the coming months, and depending on how long the lockdown lasts as high as 30%.  The financial assistance/stimulus thrown at the current crisis in just a matter of weeks already equals the totals of QE 1,2 & 3 combined, designed to combat the financial crisis in the U.S.

I can’t think of a single market strategist who was early to suggest no matter how well capitalized U.S. Banks are, they are VERY exposed to every sector and most geographies feeling the negative economic impact of the response to the coronavirus. Banks (not just Central Banks) are the lifeblood of our economy and the underperformance of the group (as measured by the Financial Select etf, the XLF) suggests from the recent highs, investors were willing to shoot first and ask questions later. The XLF took out three years of performance in one month, Selling off 45% peak to through vs the SPX down 35% from its Feb all0-time highs to last week’s lows: 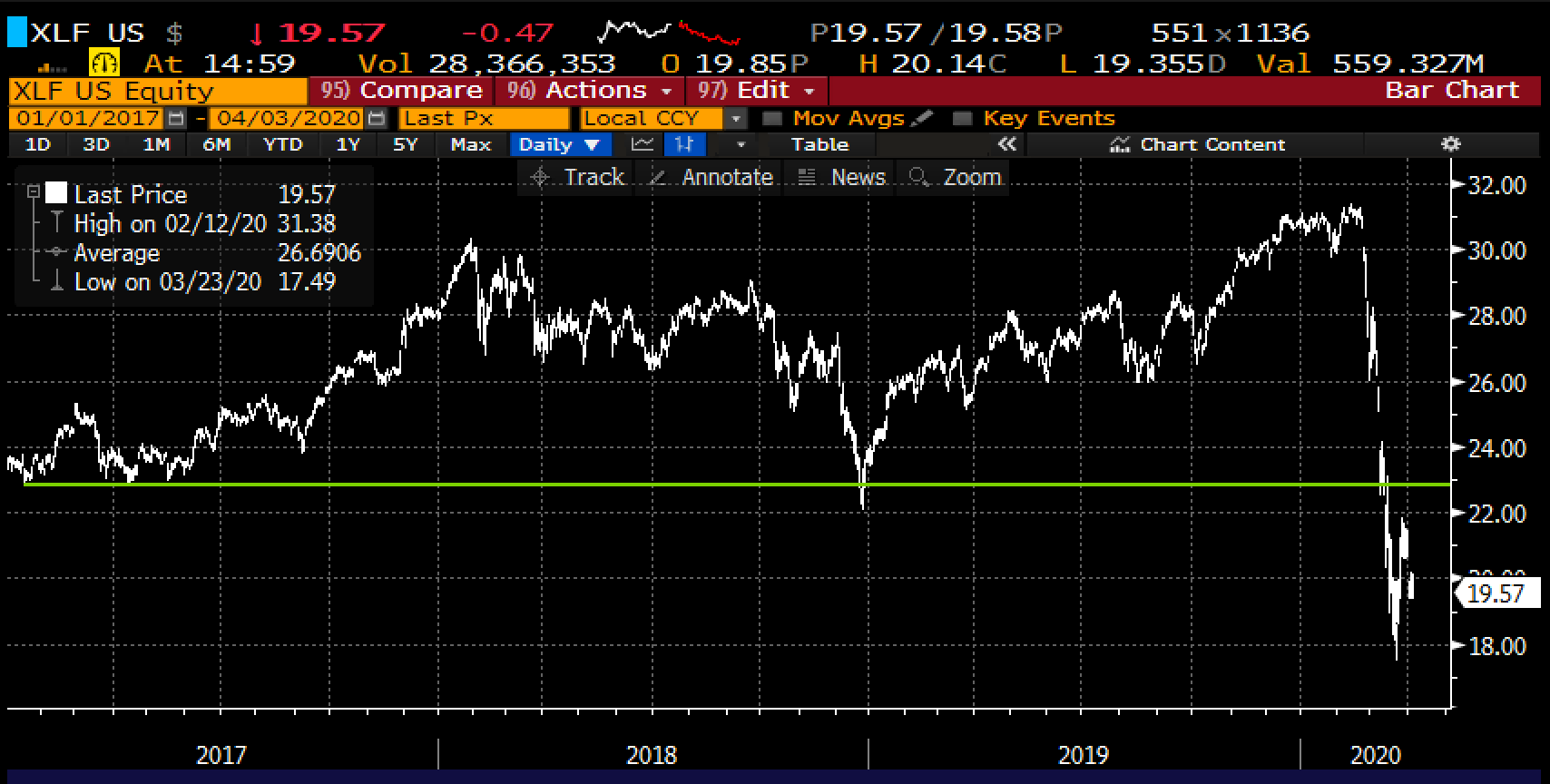 To get a better sense of the Feb highs you need to go back to the last financial/economic crisis, from the prior high in 2007 to the low in 2009: 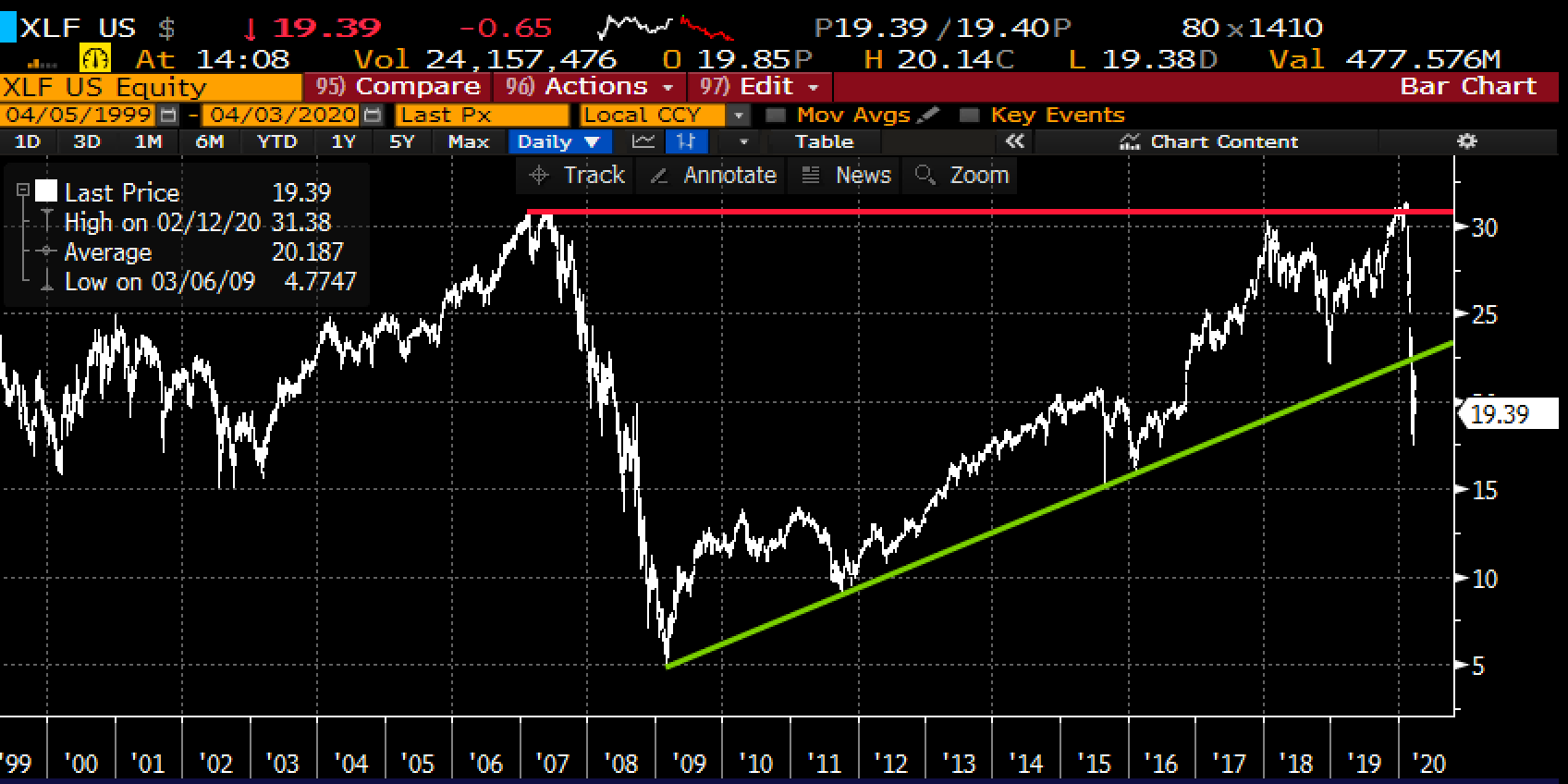 And whoa, if you look around the world, bank indices in Europe have been screaming in silence, well since the Euro Debt crisis that started in 2010, but was really just a rolling debt crisis from ours in the few years prior, then moved on to China in 2015/16: 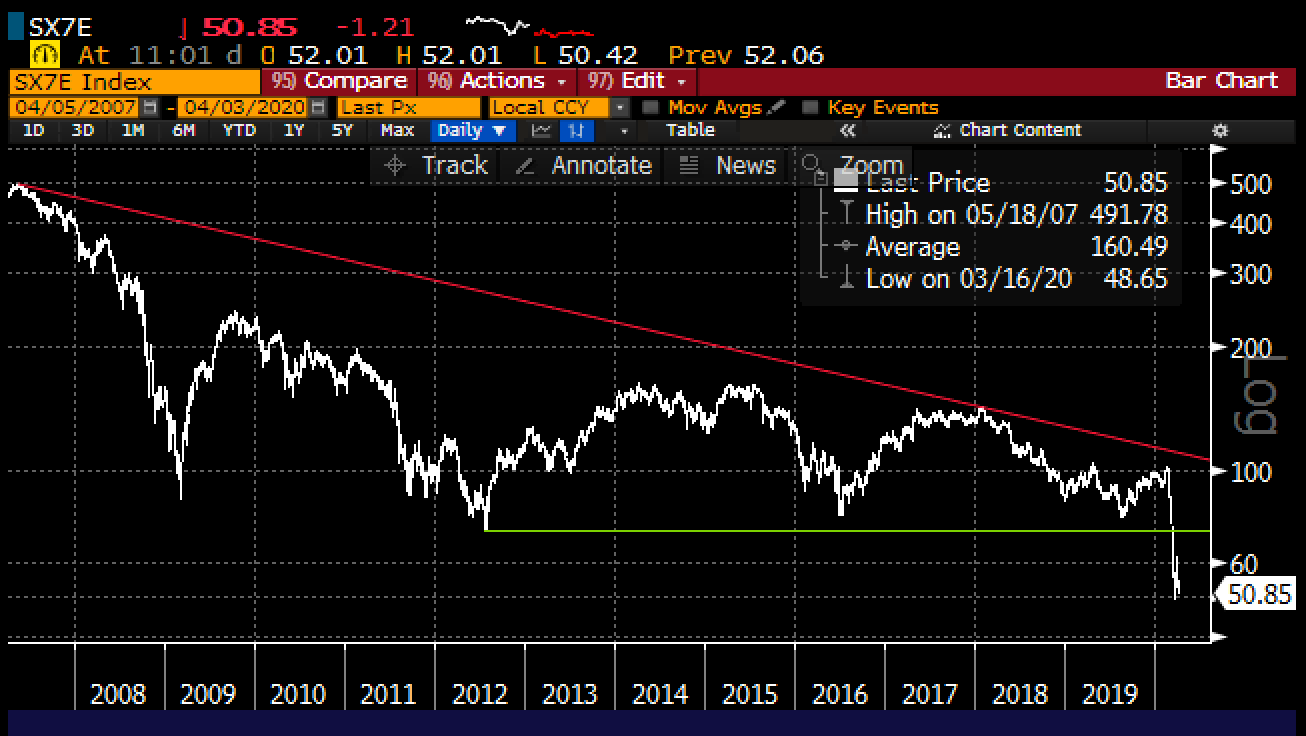 Now I don’t like to press lows, and that’s what some might feel it would be doing to take a near-term bearish view on banks, but I have had a long term bearish view on banks since the yield curve inverted last summer and I have not been in the camp that the economy was in as strong a shape as the stock market making new highs daily since late October till its recent highs in Feb might have suggested.

So if you agree with that and are looking for defined risk short exposure I think it makes sense to consider that most of the banks will be reporting Q1 earnings prior to April expiration, and I would expect their outlooks to be as clear as mud (despite posting decent Q1 results) and the stocks to make new lows in April…