Back in early March, I made a bearish case for oil, and related stocks (Oil Slick), expressing this view with a defined risk bet against the XLE, the S&P Energy Select etf that tracks large-cap U.S. energy stocks, suggesting:

if we don’t get a trade deal in the next month, then we are likely to see fairly weak Q1 earnings and guidance for Q2 and the balance of the year when earnings season gets underway in mid-April. With stocks having come so far so fast in 2019, we could very likely see a sell-off in stocks prior to earnings. XOM, CVX, COP & SLB will all report earnings in the second half of April. I suspect growing global growth fears coupled with no trade deal or a weak trade deal, and oil stocks should be one of the hardest and first hit groups.

I was a little early on that call as the commodity rallied 12% into its 2019 high at $66.60 in April, which was a little more than 50% from its December lows but it has since sold-off 20% on trade, supply and growth fears: 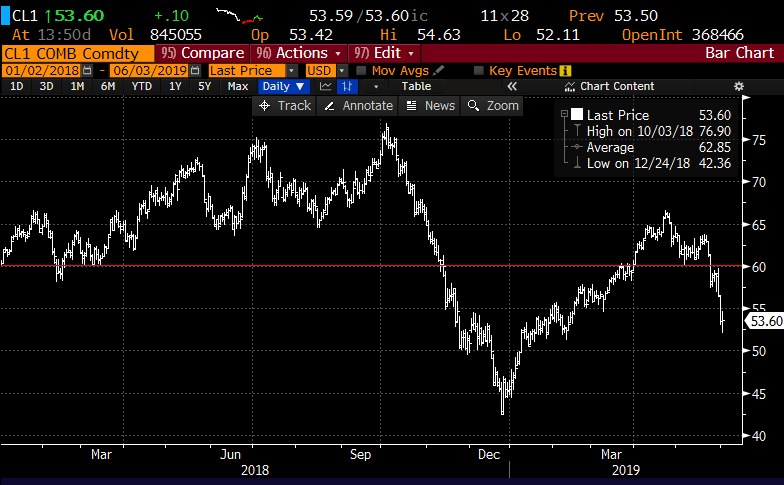 The XLE has shown some relative strength from the recent highs, only down about 13% vs Crude’s 20% decline. This makes sense as many of the stocks in the etf are very cheap stocks, with massive cash return plans and have been punished very harshly for years, dating back to their all-time highs back in 2015 before crude got cut in half in less than a year. It is also worth noting that two of the most stable dividend payers in the history of the U.S. stock market Exxon Mobil (XOM) and Chevron (CVX), who each have div yields of greater than 4%, make up 42.5% of the weight of the XLE:

Looking down the list of holdings is one name that I had routinely highlighted on CNBC’s Fast Money program in the lead up to its massive technical breakdown that SLB was an EPIC Head and Shoulders top, with a $60 neckline, which when it broke in 2018 subsequently nearly lost half its value: 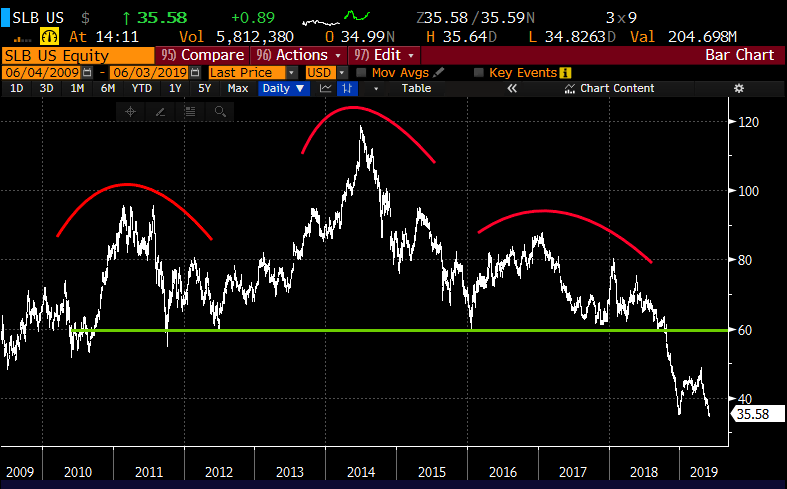 The late 2018/ first half of 2019 leg of the sell-off looks like a falling knife, but focusing in a little bit closer and you might be able to spy what could be the making of a near-term tradable double bottom, with a possible ricochet back towards $40 in the very near term, where it just broke down from: 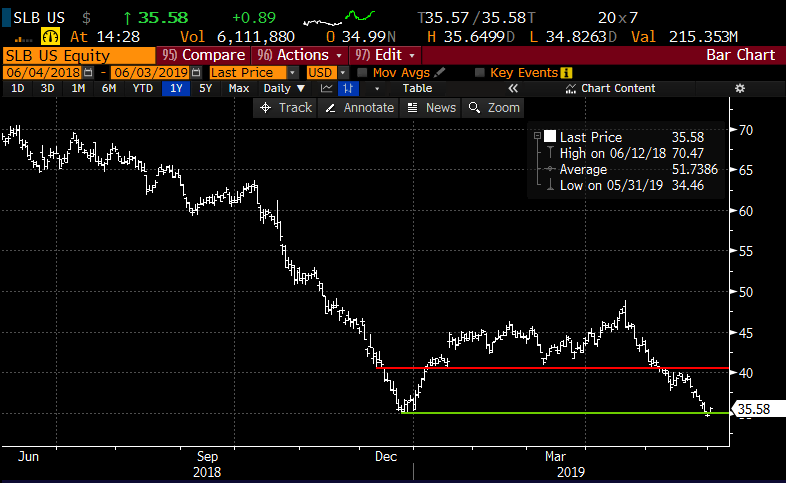 I remain fairly bearish on global growth, and the strength of the dollar, collapsing yields, the expanding trade war on multiple fronts and the recent spate of bad global PMIs and ISMs likely suggest lower lows in oil, but pressing a short in a beat up stock like SLB at technical support where sentiment is already so bearish seems counter-productive and could actually be a so bad it’s good scenario… with defined risk of course.

So what’s the trade?  Short-dated options prices have been rising steadily as the stock has sold off over the last couple months, with 30-day at the money implied volatility (blue line below, the price of options) up 40% from 25 to 35, while 30-day at the money realized volatility (how much the stock has been moving) has been declining, with the two trading at one their widest spreads in a while, making short-dated options prices look expensive:

If I were inclined to make a defined risk bullish bet I might target a catalyst like earnings which should fall on the morning of July expiration, July 19th. I might look out of the money targeting a move back to say $40

Rationale: this trade has a break-even that is 7% out of the money, but given the volatility in the stock, the poor sentiment and possible catalyst, the risk-reward of risk 1 to possibly make 4 on a 12.5% rally look attractive if one was bullish and looking to be a tad contrarian.

With the stock flirting with important support it makes sense to define risk because if it can hold here in the coming weeks it will most certainly be back near $40 on the slightest bit of good news, but that is a big if.