I asked Tim if his bullish stance was predicated on Crude Oil prices as it would seem to me with global growth concerns dominating polite financial market conversation that Crude would be a very likely casualty, oh and the chart is horrid, having just been rejected at its breakdown level near $58 from November, and today breaking below the uptrend that has been in place since late December: 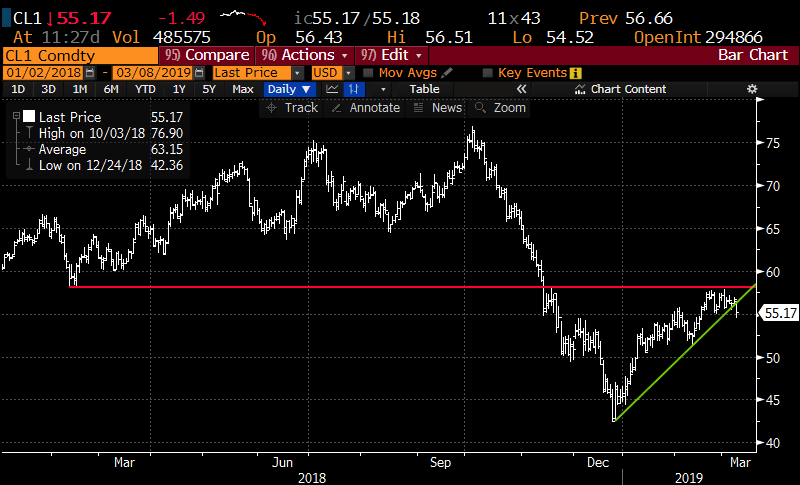 Today there are two stories weighing on energy stocks, first Crude’s 2.% decline related to global growth worries related to the timing of a trade deal with China, per WSJ:

BEIJING—The U.S. and China have yet to set a date for a summit to resolve their trade dispute, the U.S. ambassador to China said Friday, as neither side feels an agreement is imminent.

“A date hasn’t been finalized” for a meeting between President Trump and Chinese leader Xi Jinping, Terry Branstad, the U.S. envoy to Beijing, said in an interview with The Wall Street Journal.

“Both sides agree that there has to be significant progress, meaning a feeling that they’re very close before that happens,” Mr. Branstad said in his office at the U.S. embassy in Beijing. “We’re not there yet. But we’re closer than we’ve been for a very long time.”

The move, initiated by Norges Bank which manages the fund, is designed to make the Norwegian government’s wealth less exposed to a lasting drop in oil prices.

“The Government is proposing to exclude companies classified as exploration and production companies within the energy sector from the Government Pension Fund Global to reduce the aggregate oil price risk in the Norwegian economy,” the finance ministry said in a statement published on its website.

The exclusion will affect companies that explore and produce oil and will not impact integrated oil and gas companies such as BP and Shell. The Norwegian government also said that the companies to be excluded are those belonging to FTSE Russel’s Index sub sector called exploration and production. According to the government, the value of 134 stocks to be excluded from fund amounted to NOK 70 billion ($7.9 billion), Reuters reported.

Today’s gap lower in the XLE places it below a critical technical level at $65, a level it held last spring and served as a springboard to the highs $70s in the summer months and then only to break down below in early December: 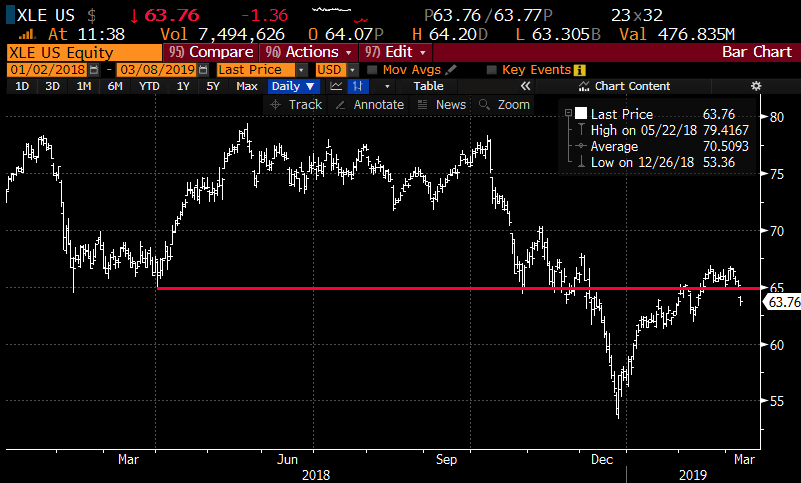 Short-dated options prices in the XLE are starting to pick-up, interestingly even before the etf had today’s sharp drop, with 30-day at the money implied volatility at 22%, implying daily movement of 2-3%:

So what’s the Trade? if we don’t get a trade deal in the next month, then we are likely to see fairly weak Q1 earnings and guidance for Q2 and the balance of the year when earnings season gets underway in mid-April. With stocks having come so far so fast in 2019, we could very likely see a sell-off in stocks prior to earnings. XOM, CVX, COP & SLB will all report earnings in the second half of April. I suspect growing global growth fears coupled with no trade deal or a weak trade deal, and oil stocks should be one of the hardest and first hit groups.

Rationale: this trade idea risks 3% of the stock price, offering a break-even down 4% with the profit potential of up to 2.5x the premium at risk for the next 4 months.

The risk to this trade is that there is trade deal with China that comes sooner than expected and is more comprehensive than many think, beyond just focusing on the trade deficit between the two nations. It is important not to underestimate China’s focus on stimulus measures, and how they can cause surges in global growth.