Last night Netflix (NFLX) reported Q1 results, despite a mild sales miss and a big eps miss (reported 55c vs 99c consensus), the company beat domestic subscriber adds (1.74 million reported vs 1.60 million consensus) and international subscriber adds (7.86 million reported vs consensus of 7.33 million)… the sub-beat though comes after the company lowered sub guidance on their Q4 call in mid-January, prior consensus was 2 million domestic and 6.7 million international, so they still came in below the prior forecast for domestic but above for intl). NFLX once again guided Q2 subs below consensus estimates (domestic Q2 subs adds of 300,000 vs consensus of 638,000 and down from 872,000 in the second quarter of 2018, and International subs adds to 4.70 million below consensus of 4.77 million but up from 4.58 million year over year,

It’s worth noting that a pillar of the bear case for the stock, the company’s spend on original content, last year at $12 billion in this year may be as high as $15 billion, which last year resulted in $3 billion of negative free cash flow, and this year the company guided that burn to be as high as $3.5 billion… I guess they are losing less per billion of spend, so that’s good right?? Last year in an article in the NYT, Ed Lee their media reporter broke down how the company is showing a profit but burning billions: 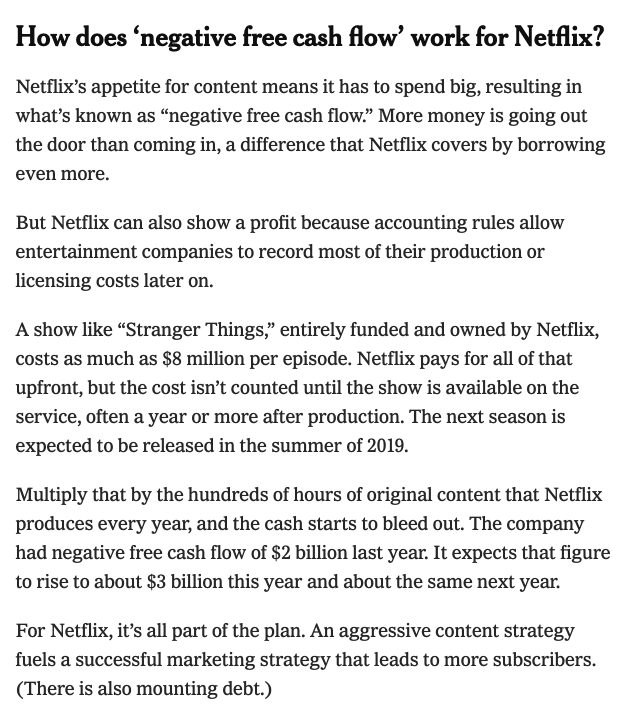 The stock was volatile since the print last night, trading down 9% before the conference call, going unchanged by the end of the call, up 3% this morning and flat as I write at 11:30am. Yesterday I previewed the earnings report here and offered a couple of ways to play into the print. But regular readers know we are not huge fans of taking long premium trades into events like earnings as options premiums can be very elevated like they were into NFLX’s earnings last night. The options market on last night’s close was implying a move today of $26, as I write the stock is down $1. If you bought the weekly at the money straddle (the call premium + the put premium) playing for at least a $26 move in either direction you are getting destroyed today. If you bought just the weekly at the money call or the at the money put playing for a move in one direction you needed at least a $13 move today or tomorrow to merely break-even, also getting destroyed. Which is why I generally like to wait and see what the news is.

In this case, I think there is a good chance that the news gets incrementally worse from here over the next few months on churn and competition and investors once again focus on that negative free cash flow. It is also interesting to note that the stock has been stuck in a range since their Q1 report in mid-Jan, and all of the stock’s 28% ytd gains coming in the first few weeks of the year. I am not sure what positive news is in the offing to break it out of this range, and I also think the likelihood of a breakout in the broad market is low and th next 10% move is to the downside. I would expect a stock like NFLX to materially outperform to the downside. NFLX has clear overhead resistance near the Oct high at $390 and decent support at its 200-day moving average at $338 where the stock has bounced a few times in the last three months: 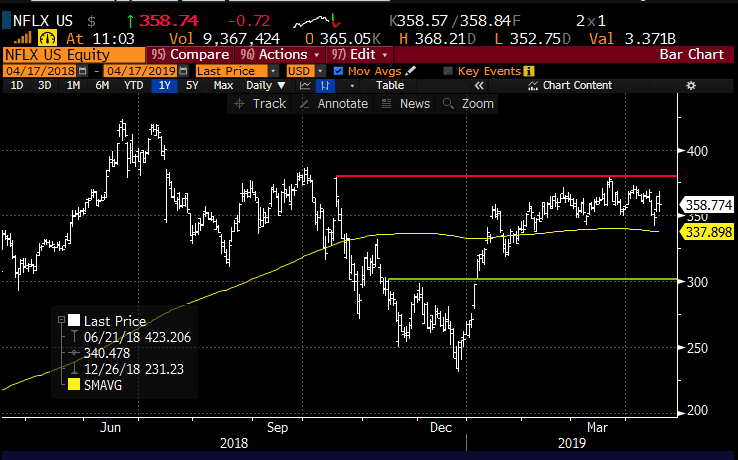 A failure here could put $300 in play in the coming months.

As I mentioned above, short-dated options prices have come in hard after the report and the lack if movement in the stock, with 30-day at the money implied volatility at 31% nearing 6-month lows:

So what’s the trade? I have a couple of ideas here for those who think Disney’s offering will weight on bullish sentiment for shares of NFLX, one near term, and one looking to leg into a trade into the second half of the year when Disney finally launches it’s Disney+.

If I were inclined to play for a move back towards $300 in the next two months I might consider the following put spread in June expiration:

Rationale: this trade idea risks 3.3% of the stock price with a break-even down 6% (which was below the implied earnings move) and offers a profit potential of 10.5% if the stock is down 16.5% in two months.

Second, intermediate-term bearish: If you thought the stock remains rangebound as it has been for 3 months, failing to break out above $the $370-380 range and failing to breakdown below the mid $330s then it makes sense to play for later catalysts, selling shorter-dated out of the money puts to help finance longer-dated ones. For instance…

The ideal scenario is that NFLX stock is near 325 on June expiration and the short 325 put expires worthless or can be covered for a small amount and you are left long Oct 325 put for $14 or about 4% of the current stock price.

The max risk of the trade is $14 on a sharp move higher than current levels or a sharp move below the 325 strike.