Netflix (NFLX) will report their Q1 results tonight after the close. The implied one day move is about $27, or about 7.5%. That can be determined by taking the at the money straddle in the weekly expiration (the call premium + the put premium) and dividing by the stock price. In this case, the April 18th (Thursday expiration put and call) with the stock near $355 are each offered at about $13.50 if you bought that, and thus the implied one day move then you would need a rally above $382 or a decline below $328 to make money by Thursday’s close.

Shares of NFLX are nearly at the exact same spot they were in on January 17th when they reported their Q4 results that initially sent the stock lower 4% the next day. To be fair, the stock was up sharply into the report, rising more than 40% in the three weeks prior and on the heels of their subscription price hike the prior week that Wall Street analysts and investors alike loved as the increase should drop straight to their bottom line. The stock’s decline was largely a result of a slight revenue miss in the quarter, but most importantly was their disappointing guidance for Q1, per Barron’s.com:

Netflix’s forecast for the current quarter of 56 cents per share in earnings on revenue of $4.49 billion. Wall Street has been expecting EPS of 84 cents and $4.60 billion.

That guidance was enough to weigh on shares even though Netflix announced the addition of 8.8 million subscribers worldwide, some 7.3 million from outside the U.S. In the same quarter a year ago, it reported a net gain of 6.6 million global subscribers.

RBC Capital’s top-ranked Internet analyst Mark Mahaney who rates shares of NFLX a Buy with a $480 twelve month price target thinks, based on his team’s survey work throughout the quarter think that:

Mark highlights the following key factors to look for in the quarter:

It is worth noting that NFLX ability to raise prices going forward may be very limited given the scope of Disney’s ambitions with their recently announced OTT offering, and their subsequent pulling of all Disney/Pixar/Marvel/Lucas content from NFLX and their pricing well below that of the large incumbent. We might have just witnessed NFLX’s last ever price increase.

My take into the print: The company’s Q1 guidance has obviously kept the stock rangebound since Jan 17th as investors digest the impact of oncoming competition and the potential for any churn following their price increase. Given the lowered expectations, on a beat and raise the stock is easily up inline with the implied move on its way in the coming days/weeks to $400, and possibly the prior highs. If Reed Hastings, who recently left Facebook’s board decides to flex his muscles in the face of all of the naysayers he could really do a number on the shorts with overly optimistic subscriber guidance with increased profitability.

On the flip side, if the company were to only meet the lowered guidance from January (or somehow miss) and guide down for Q2 then the stock will be down 10% before you can say Thanos Snap.

To my eye the stock has some near-term overhead resistance at the October high near $380, very near the implied earnings movement, while the 200-day moving average (yellow line) has been a level of support that the stock has bounced from on a few occasions over the last couple months: 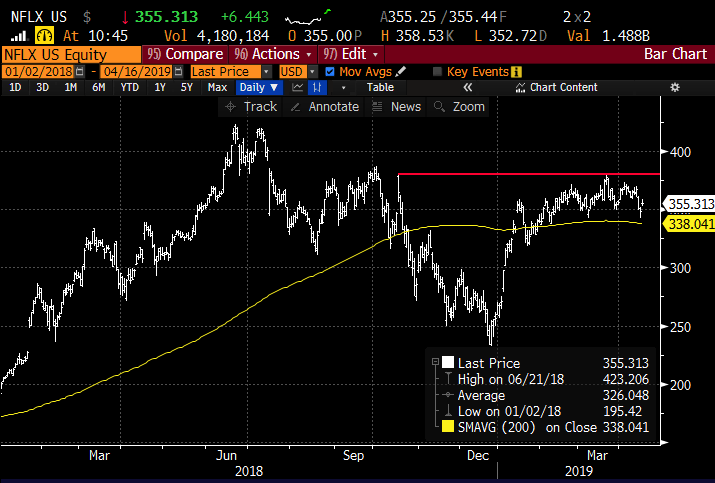 So what’s the trade? I really don’t have a strong feeling one way or the other but I’ll make two quick points. First, the fact that all of the stock’s year to date gains of 33% came prior to Q1 results tells you that investors are cautious. But a miss and guide lower and the stock gets pummeled. Second, because of what feels like the cautious sentiment of late, and unexpected beat and raise could cause a sharp short-squeeze as investors will once again be reminded of the secular growth trend in the space at a time where they will have to wait years to see Disney’s results.

I’ll offer a couple of ways to play with defined risk depending on one’s directional inclination:

Rationale: this trade idea allows one month after earnings for the bullish thesis to play out. It risks about 4% of the stock price, with a potential of 3 to 1 payout if the stock is back near its all-time high on May expiration.

Rationale: if this stock is going down after such a long consolidation I think it makes sense to leave room to the downside rather than sell a dollar cheap out of the money put to reduce the cost of the trade. This trade risks 4% of the stock price to make a defined risk bearish bet that also offers the optionality of selling a downside put to make a vertical spread in the event the stock does break lower.