On a couple of occasions in the last two years, I have laid out a bullish view on Electronic Arts (EA), both on its way up in November 2017 (It’s In the M&A Game?), suggesting:

Given EA’s heavier reliance on sports game franchises like Madden & Fifa (and recent esports announcements with the NFL and Fifa, here & here), their exceptional balance sheet and the stock’s relative underperformance in 2017, I want to take a look at this one for a potential takeout in 2018 from either an old or new media player.

and its way down in 2018 (Heartache to Heartache (EA) is a Battlefield), suggesting in August:

From where I sit, EA is fairly compelling for a few of reasons, the pre-announcement might have lowered expectations enough that when the company reports fiscal Q2 results on Oct 30th that they not only meet but are able to guide higher into holiday season coupled with Battlefield V launch on Nov 20th. Also, the stock screens as fairly cheap relative to expected FY2020 eps growth of 15%, trading 21x. Lastly, as media companies scramble to acquire content, I think there is a good chance that EA’s sports titles, Star Wars games and emerging presence in eSports could prove to be a valuable asset for the likes of Disney (DIS).

Well at its highs this year in July, which also marked the stock’s all-time highs just above $150 its was up over 40% on the year, but has since dropped nearly 45% placing the stock down 20% on the year, with the drop dispelling of the prior 18 month’s positive performance: 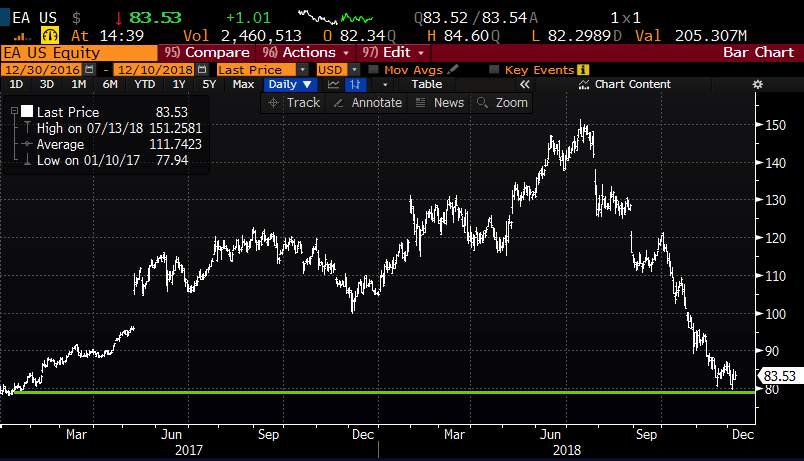 This morning gaming analyst Michael Olson from Piper Jaffray finally got around to cutting his price target from $148 to $105 suggesting (per Barron’sOnline):

Olson anticipates the company offering fiscal 2020 guidance that “will be conservative,” saying “we are adjusting our estimates now, in advance of that initial guidance.”

Concerns about near-term execution, including the delayed launch of a key holiday-season game, have dragged on EA’s stock. A second challenge has been worry that while the industry is healthy, leading companies’ share prices may have reflected too much optimism about their competitive positions as they ran up earlier this year.

Olson now says to look for EPS of $5 on revenue of $5.5 billion for the software maker. The forecast is below FactSet’s consensus estimates of $5.14 and $5.58 billion, respectively.

Management’s next scheduled earnings report is on Feb. 5. When the videogame maker reported its latest quarterly results in October, it told investors to expect revenue of $5.15 billion, and diluted EPS of $3.11 for fiscal 2019, which ends March 31. Both numbers are below FactSet’s consensus.

“We would not be surprised if [management’s] initial fiscal 2020 guidance is below our downwardly revised numbers,” he wrote, “as it’s likely EA will want to include a layer of conservatism to allow for upside as we progress through the year.”

EA might not only be take-over bait, but also activist bait with 18% of their $25 billion market cap in cash (14% net of their $990 million in debt), trading at just 16.4x next fiscal years expected double-digit eps growth. The stock’s decline of late kind of anticipates conservative Fiscal 2020 guidance in my opinion.

So what’s the trade? target fiscal Q3 earnings in early February as a potential positive catalyst, basically that guidance is not as bad as expected, but look to finance longer dated out of the money calls by selling shorter-dated ones of the same strike.

This trade performs best with a gradual move towards the 90 strike over the three weeks into Dec 28th weekly expiration. If the stock is below 90 on Dec 28th weekly expiration the short 90 call will expire worthless and the trade will be left naked long the Feb 90 call. If the stock is close to 90 then the Feb 90 call should have appreciated as it will have picked up deltas. At that point it might make sense to further reduce the premium at risk by selling a higher strike call in Feb turning the trade into a vertical call spread. The max risk f this trade is the $3 premium paid, and would be at risk with a large move below the current level, or well above the 90 strike.