Last week on August 22nd in the Options Action segment within CNBC’s Fast Money I took a quick look at some options activity in Electronic Arts (EA):

I highlighted the one year chart suggesting that the uptrend from the 52-week lows should serve as support:

Well, this week the stock broke below the uptrend on massive volume: 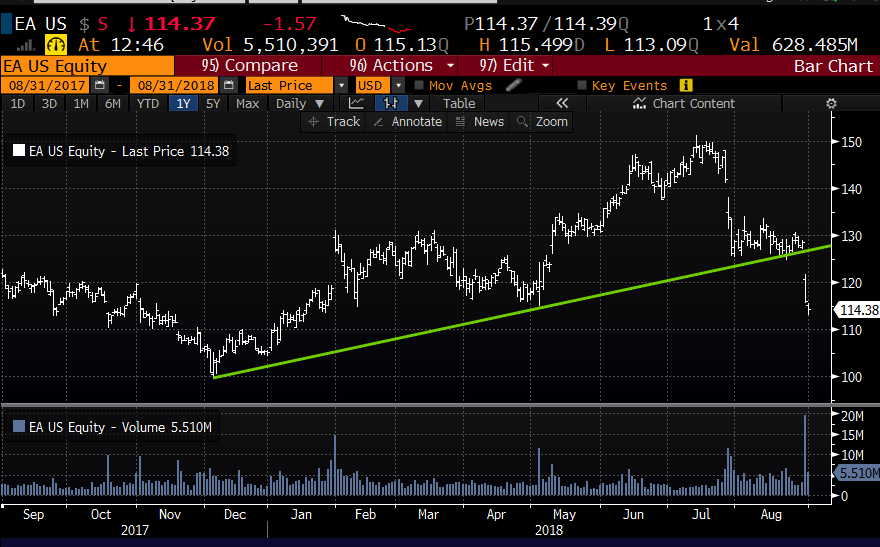 Why? for the second time in 5 weeks the company lowered guidance on a push out of their shooter game Battlefield V and headwinds from foreign exchange.

Today there was a massive roll in March options where a trader appears to be rolling down a long call position, selling to close 57,000 March 125 calls at $5.81 (or $33 million in premium) and Bought to open 49,000 March 115 calls for $10.44 (or $51 million in premium). This appears to be part of a larger position, where the trader owns a call spread (rolling today the long leg, against a short put position in the 100 strike in March where there is 77,000 open interest), per Bloomberg:

I think it is safe to say by the capital commitment for this call spread risk reversal that this investor is fairly well convicted on her view for two reasons, first she is rolling down long calls, locking in losses on the 125 strike, but also short a downside put which has been increasing in value as the stock has gone lower, further exacerbating the losses in the position.

From where I sit, EA is fairly compelling for a few of reasons, the pre-announcement might have lowered expectations enough that when the company reports fiscal Q2 results on Oct 30th that they not only meet but are able to guide higher into holiday season coupled with Battlefield V launch on Nov 20th. Also, the stock screens as fairly cheap relative to expected FY2020 eps growth of 15%, trading 21x. Lastly, as media companies scramble to acquire content, I think there is a good chance that EA’s sports titles, Star Wars games and emerging presence in eSports could prove to be a valuable asset for the likes of Disney (DIS).

So what’s the trade? The stock is still in a bit of a free-fall, down about 25% from its 52-week and all-time high made in late January, so it makes sense to structure trades that allow for room on a long entry… consider risk reversals, selling an out of the money put to help finance the purchase of an out of the money call…

Rationale: while this trade structure costs about 2% of the stock price, that is the max risk if the stock is between 100 and 120, with the worst case occurring if the stock is down 15% from current levels.