Square (SQ) will report their Q3 results tonight after the close. The options market is implying about an 8.5% move in either direction which is a little rich to the average 7.5% one-day post-earnings move over the last eleven quarters since going public in late 2015. With the stock near $82, the Nov 9th weekly 82 straddle (the call premium + the put premium) is offered at about $6.80, if you bought that, and thus the implied move you would need a rally above $88.80, or a decline below $75.20 by Friday’s close to make money.

Shares of SQ have been a tad volatile this year, despite being up 137% in 2018, the stock is down 20% from its all-time highs made in early October. Last month the stock appeared to find some technical support in the mid $60s, with resistance very likely to be at the prior all-time high near $100: 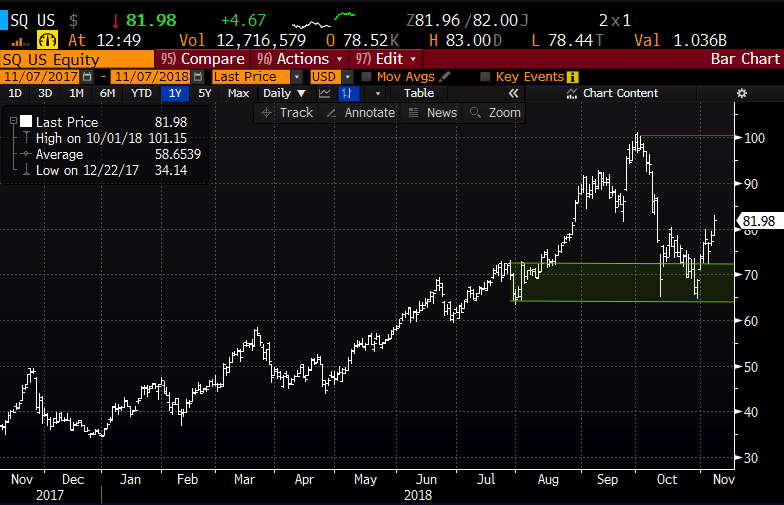 In late September when SQ was approaching $100 I detailed a collar strategy for long holders (Square (SQ) on a Tear) to protect gains.

On Oct 11th after the stock’s 30% decline I updated this view, rolling down hedges for longs (Square Stock Into A Round Hole).

With the stock near $82, up 27% in the last week, I suspect there is a good bit of news in the stock. If I thought no matter what the company reported that the stock would at the very least consolidate recent gains, at the very worst, miss and guide down, then I might consider put spreads, for instance…

But If I thought the company could put up a beat and raise and the stock would be on its way back to the prior highs near $100 I might consider the following trade idea: