On September 26th I took a look at the precipitous run-up in shares of Square (Square on a Tear) having just seen their CFO speak at a conference, and the stock quickly approaching the nice round number of $100, I remarked:

In the days following that post the stock did briefly top $100,.

I also suggested that there might be some management changes in the offing:

What’s fairly clear to me, after meeting Friar in late 2016, and seeing her at other conferences and on programs like Jim Cramer’s Mad Money (watch here and here) that Ms. Friar has to be on the short list for almost every Fortune 100 CEO job opening. Oh and if SQ CEO / Founder Jack Dorsey wants to keep her he will have to make her CEO, relinquishing the helm. And wouldn’t it be a great time to do this as SQ is about to kiss $100 a share, up from its November 2015 IPO price of $9 and refocus all of his attention back to Twitter??

Well, it wasn’t a fortune 100 CEO job that Friar took yesterday, it was of internet start-up called Nextdoor, a local social network that has raised nearly $300 million and is valued at over $1 billion.

Square briefly topped $100 shortly after I wrote that post, but has since got creamed, down 14% today alone on the Friar announcement, and down 30% from the prior highs. 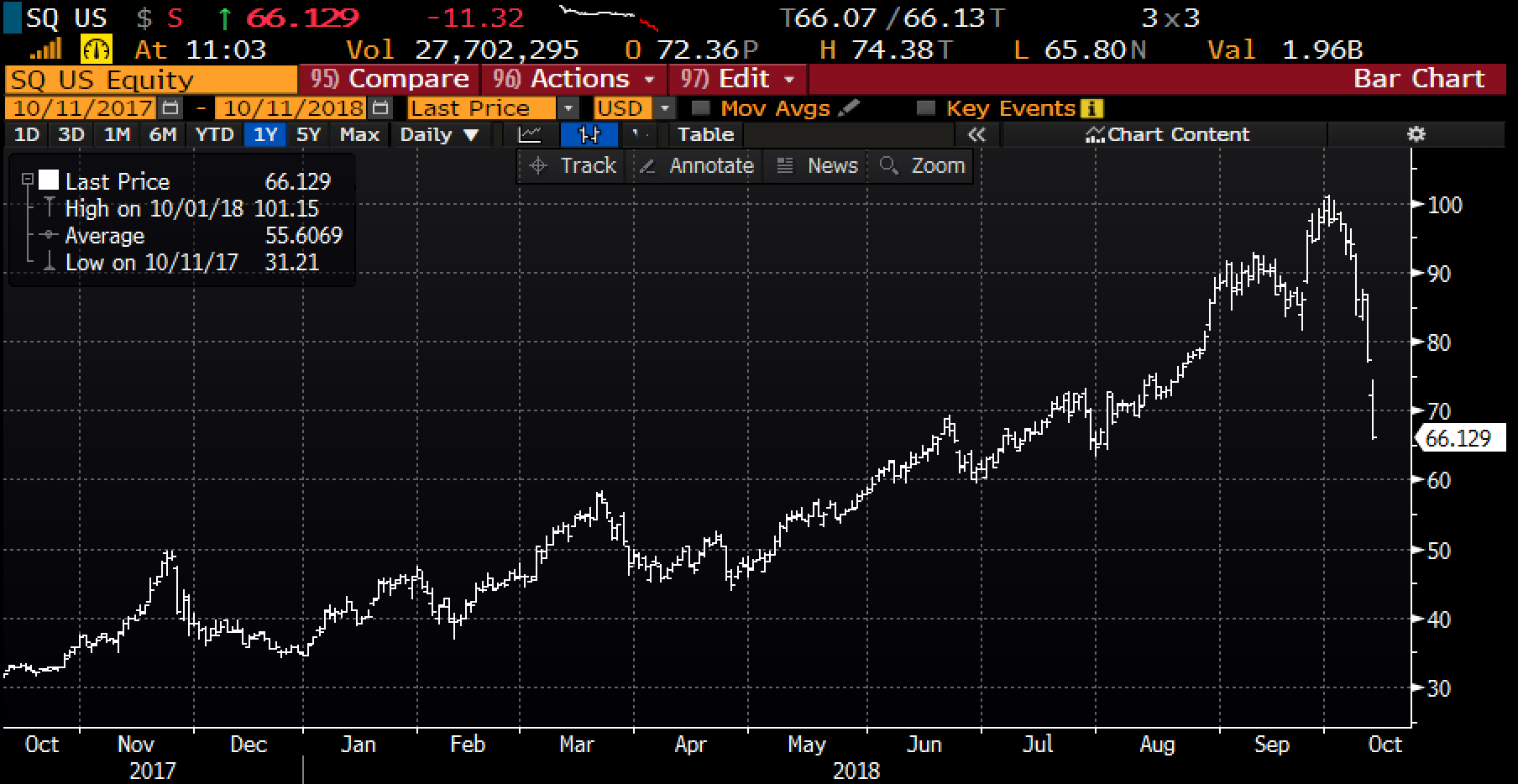 In the Sept 26th post I detailed a hedging strategy for long holders who were starting to get worried about the stock’s parabolic move but want to remain long, but better define their risk…

If I were long SQ stock, and have enjoyed much of the 2018 gains, and considering taking some profits, but looking to hold out to sell until 2019 to avoid a large tax liability this year I might consider a collar where I could participate on further upside, to a point, but also have defined risk to the downside, I might consdier collaring my stock. For instance…

Profits of the stock up to 30.50 between current levels and the short call strike of $125. Profits capped above $125.

With the stock in crash-mode at $66, well below the long put strike of the hedge, it makes sense to adjust….

At this point, I think it makes sense to close the original collar if you plan to stay long the stock, and look to spend some of the gains on the hedge to roll into a shorter dated put spread. Vs the stock at $66 it makes sense to consider the following hedge:

Rationale: this roll helps mitigate possibly 20% of potential losses down to $50 which would be a 50% retracement from the recent all-time highs.

Its important to remember that just as stocks can overshoot to the upside they can do so to the downside.