This morning Morgan Stanley’s auto analyst Adam Jonas upgraded shares of General Motors (GM) to a Buy rating with a $45 twelve month price target. Here were the highlights of the upgrade from Bloomberg:

as potential U.S. infrastructure spending may boost pickup truck demand, and autonomous vehicle
expectations have been reset to “rational levels”, analyst Adam Jonas writes in a note. Shares gain 2.3% in pre-market trading.
* Infrastructure spending typically has a ripple effect and coincides with increased pick-up sales to complete projects; plans to roll out revamped Sierra, Silverado models later this year positions GM well heading into 2019
** Sees every 10% move in North America pickup production adding as much as 14% to 2019 EPS and 12% to 2018 EPS
* Says GM has gotten “outsized credit” for its work in autonomous vehicles, especially compared to peers, and recent accident reports involving Uber and Tesla have helped reset market expectations

And here was Jonas on CNBC’s Halftime report (click below). Jonas was clear that his upgrade was about the potential for GM to improve on Auto 1.0 fundamentals, having little to do with their prospects in electric and autonomous vehicles: 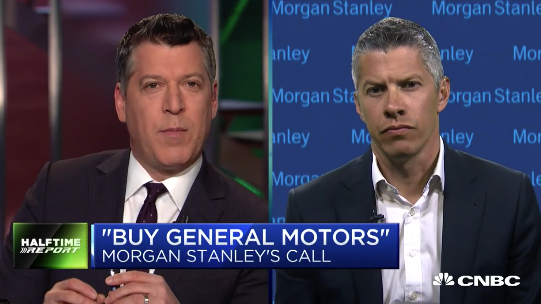 Back in October I took a look at the reasons for GM’s then 35% rally off of its 52-week lows and highlighted a couple of brokerage firm upgrades that were specifically focused on the things that Jonas is not (for the moment), EV and AV, from Oct 6th: 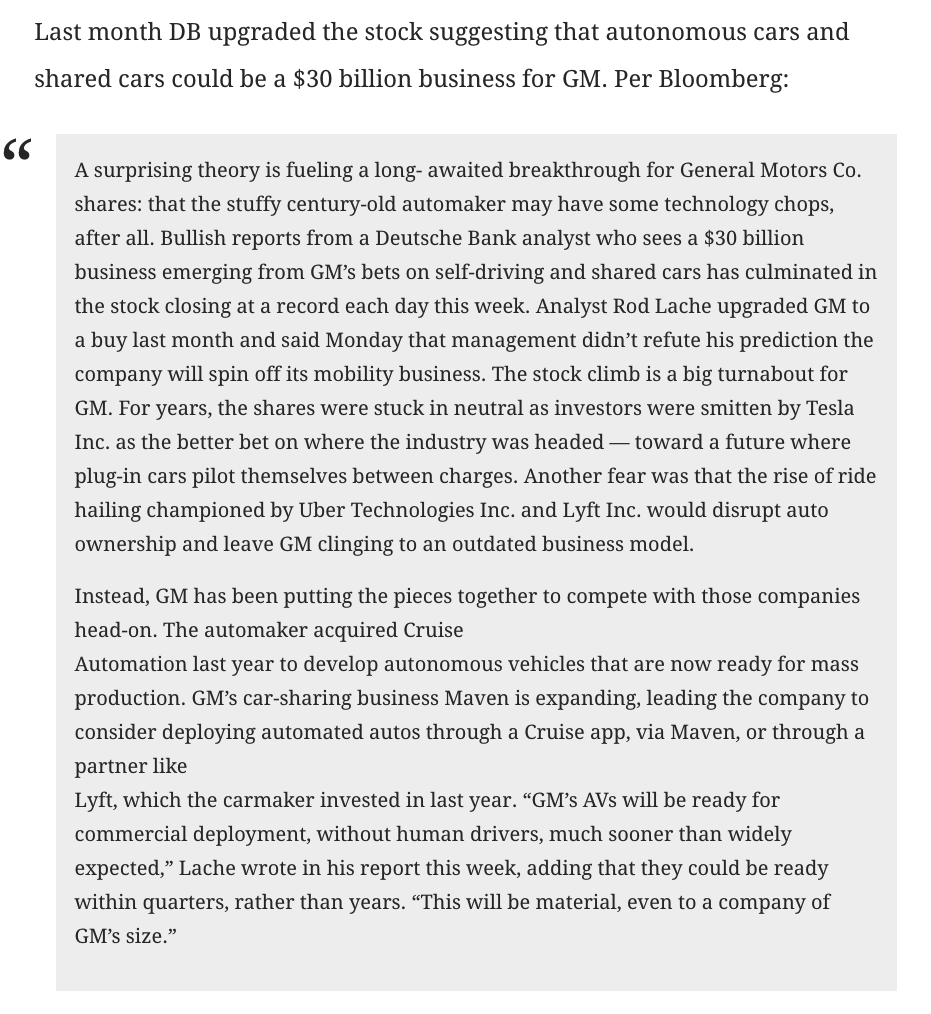 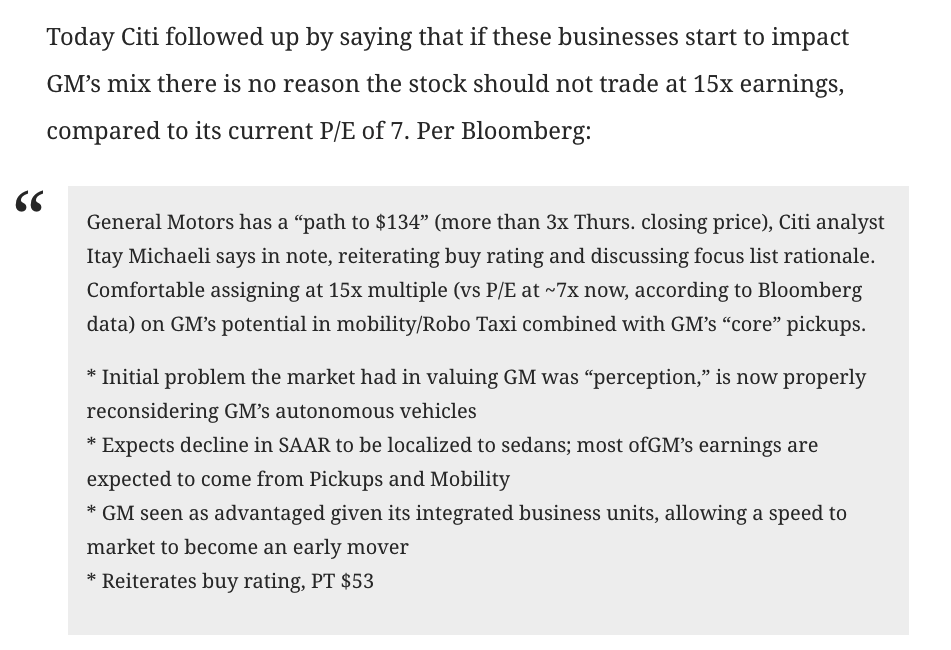 Shares of GM are having a fairly muted response to the upgrade, up only 1.4% as I write. GM shares are down  7% on the year, and down nearly 20% from its 52-week highs made in late October, following Jonas prior downgrade of the stock to a Hold, and around the time Goldman Sachs slapped a Sell rating and a 12-month price target of $32 on the stock, per CNBC:

“Looking ahead into 2018 and given the current valuation level, we see a downward inflection in GM earnings and consequently downgrade shares to sell,” wrote analyst David Tamberrino in a note Monday. “Our work on pickup trucks and crossovers suggest that GM likely experiences volume and mix headwinds that exacerbate the cyclical profit headwinds. Combined, we see this driving 2018E EBIT-adjusted down by 22% yoy and compressing overall corporate margins. We see 28% downside to our 12-month price target of $32.”

“As we continue to believe the North America auto cycle has peaked (17.5mn in 2016) and is set to normalize (to 15.0mn in 2020), we remain cautious on the sector and see mostly downside to shares in our OEM coverage (as more than 100% of profit and FCF is generated in North America),” wrote Tamberrino. “However, we see outsized downside to shares of GM as we expect a negative earnings inflection in 2018.”

Despite the positive news today, analysts remain very mixed on the stock with 13 buy ratings, 11 holds and 2 sells.

As far as today’s price action its important to note that the stock has risen about 10% from its intra-day low on March 28th, bouncing off of an important near-term support level. If it was not for that bounce the stock would have been headed right to Goldman’s $32 price target: 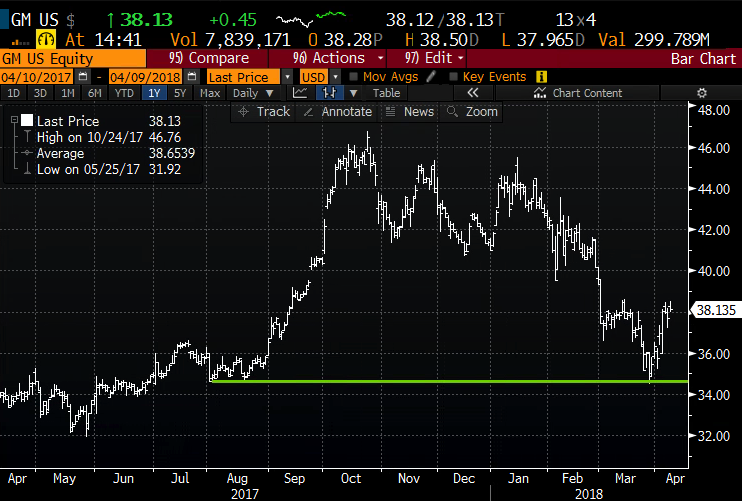 So what’s the trade if you agree with Jonas’s call? Given the stock’s recent bounce, its lack of reaction today, and short-dated options prices that are very elevated, 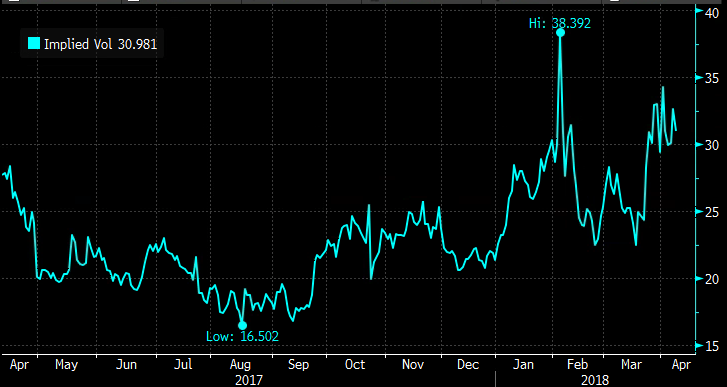 it might make sense to look to sell short-dated out of the money calls to finance longer-dated ones, buy a call calendar.

The next identifiable catalyst for the stock will be Q1 earnings on April 26th before the open, the options market is implying about a $2,30 move, or about 6% between now and then.

If the stock is 41 or lower the May 41 call will expire worthless, leaving you long the Sept call. The ideal scenario is the stock is higher so that the 41 calls in Sept gain value with deltas which will compensate for the time decay of those calls, while also being offset by the more rapid decay of the shorter-dated May calls that you are short.

The max risk is the $1 in premium on a move well below current levels or well above the 41 strike. If the stock were to be near $41 on May expiration you could sell a higher strike call in June or July making a diagonal calendar or sell a higher strike call in Sept and make a vertical call spread, both instances further reducing the premium at risk.