Shares of GM are up nearly 29% on the year, most gains coming since the start of September: 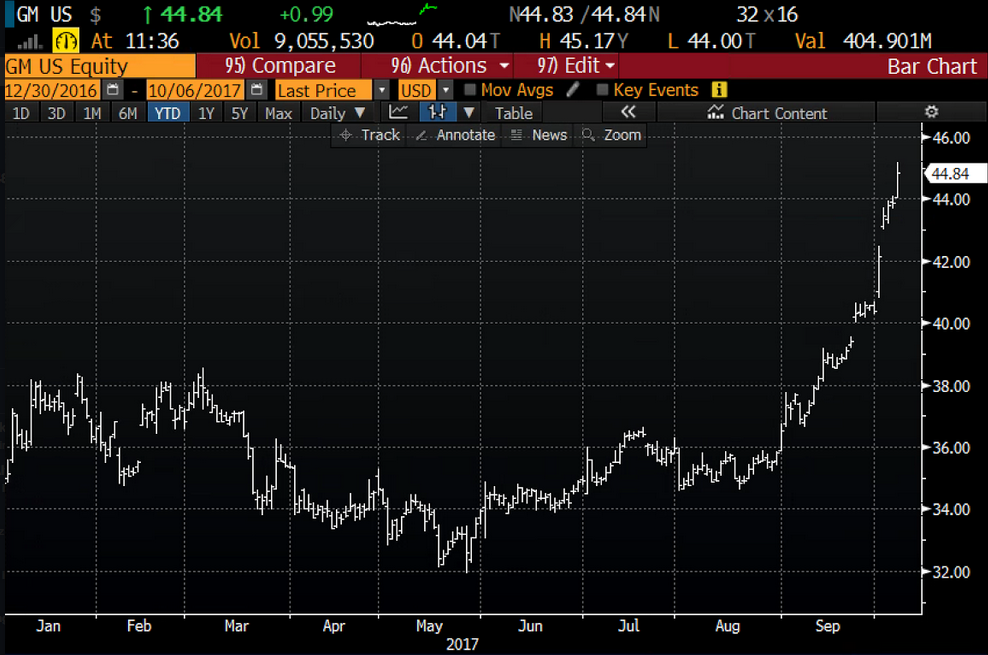 Last month DB upgraded the stock suggesting that autonomous cars and shared cars could be a $30 billion business for GM. Per Bloomberg:

A surprising theory is fueling a long- awaited breakthrough for General Motors Co. shares: that the stuffy century-old automaker may have some technology chops, after all. Bullish reports from a Deutsche Bank analyst who sees a $30 billion business emerging from GM’s bets on self-driving and shared cars has culminated in the stock closing at a record each day this week. Analyst Rod Lache upgraded GM to a buy last month and said Monday that management didn’t refute his prediction the company will spin off its mobility business. The stock climb is a big turnabout for GM. For years, the shares were stuck in neutral as investors were smitten by Tesla Inc. as the better bet on where the industry was headed — toward a future where plug-in cars pilot themselves between charges. Another fear was that the rise of ride hailing championed by Uber Technologies Inc. and Lyft Inc. would disrupt auto ownership and leave GM clinging to an outdated business model.

Instead, GM has been putting the pieces together to compete with those companies head-on. The automaker acquired Cruise
Automation last year to develop autonomous vehicles that are now ready for mass production. GM’s car-sharing business Maven is expanding, leading the company to consider deploying automated autos through a Cruise app, via Maven, or through a partner like
Lyft, which the carmaker invested in last year. “GM’s AVs will be ready for commercial deployment, without human drivers, much sooner than widely expected,” Lache wrote in his report this week, adding that they could be ready within quarters, rather than years. “This will be material, even to a company of GM’s size.”

Today Citi followed up by saying that if these businesses start to impact GM’s mix there is no reason the stock should not trade at 15x earnings, compared to its current P/E of 7. Per Bloomberg:

* Initial problem the market had in valuing GM was “perception,” is now properly reconsidering GM’s autonomous vehicles
* Expects decline in SAAR to be localized to sedans; most ofGM’s earnings are expected to come from Pickups and Mobility
* GM seen as advantaged given its integrated business units, allowing a speed to market to become an early mover
* Reiterates buy rating, PT $53

The only problem is that’s still a lot of ifs as investors pile into the name. In the meantime, analysts expect GM’s eps and sales to decline next year, with its eps decline the first in 4 years.

This transition to the car of the future will likely take considerable further investment and at the expense of existing market share and it could be years in the making.

Simply put, from a trading perspective, the stock has gone too far too fast.

The next identifiable catalyst for the stock will be Q3 earnings on Oct 24th. The analysts may be right that the future is bright, but GM still has a lot to deal with in the short term. And positioning for some of this parabolic move to be re-traced makes sense near term, targeting the recent breakout level near $40: 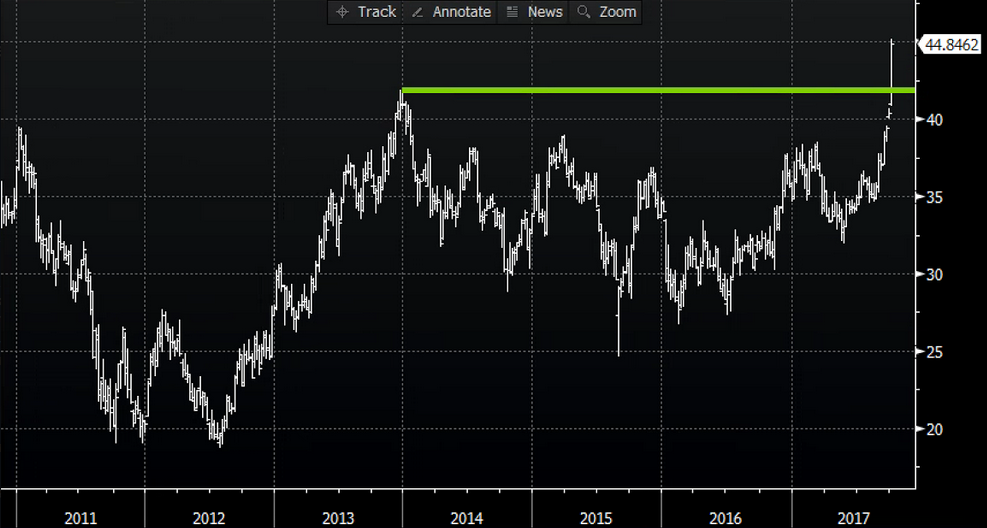 Break-even on Nov expiration:
Profits: up to 3.20 between 43.20 and 40, max gain below 40 (breakeven down 3.5%)
Losses: up to 80 cents or less than 2% between 43.20 and 44 with max loss of 80 cents above 44 (max gain down 10%)
Rationale – GM shares have ripped higher on a brighter future, but investors will likely have to wait some time. In the meantime, a defined risk bearish position into earnings makes sense to play for some re-tracement.
Share on Facebook Share
Share on TwitterTweet
Share on LinkedIn Share
Send email Mail
Print Print