Twitter reported earnings this morning. That was pretty early Pacific Time, and possibly a direct rebuke to “the company is a bunch of stoners” allegations from Paypal co-founder, Silicon Valley investor, and long lost third Duke Brother Peter Thiel.

It seems people are talking less and less about Twitter lately, even us. And that makes sense as it seems all anyone could talk about recently was the Snapchat (SNAP) and Facebook’s laser like focus on destroying Snapchat. It seems like there’s only room for one or two social media properties in our investment consciousness and it may prove to be true that’s the same for our own smartphones. Here’s a chart showing Instagram (FB) stories overtaking Snapchat: 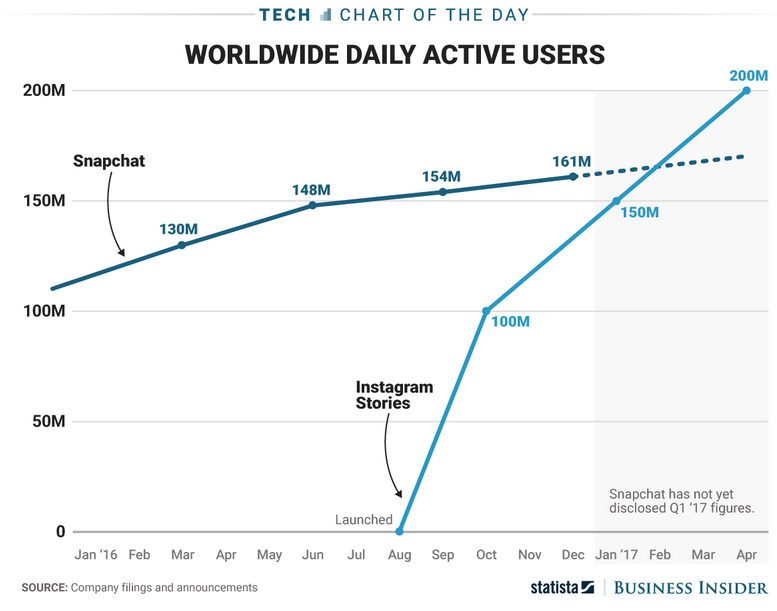 Here’s how the company did compared with what Wall Street was expecting, according to Thomson Reuters consensus estimates:

CEO Jack Dorsey attributed the accelerating user growth and engagement to a number of changes that have improved the user experience in the timeline and notifications to draw users back to the timeline. Dorsey pointed to the deployment of machine learning to show users tweets that are more relevant to them.

Twitter is not going anywhere, even if the stock looked like it was going to zero recently. Of course catching a falling knife in in a stock like this can seem unnecessary self flagellation. And that is true. Why own stock in Twitter when you can just own best of breed Facebook, who seems intent on destroying everyone else in social anyway. If Twitter improved their product in a meaningful way (and user growth issues have ALWAYS been a product issue) wouldn’t that just call attention to Facebook? Maybe. But at some point the enterprise value of a Twitter starts to stock out with the stock so low.

And luckily options allow for the ability to buy time without having to watch the day to day gyrations of the stock. The last we talked about Twitter as a trade was back in early February with the stock near 18. Here was the stock alternative at the time and some thoughts:

The stock was down sharply since early February and the stock went into earnings below the 15 strike. But mark to market this trade was down just a little more than a dollar. And the most likely scenario now with the stock near 16 is that it would expire worthless or be put the stock at 15 which is much better than the close to 18 dollars when we talked about the stock in early Feb.

I think the same philosophy is in order with the stock higher this morning. In a beaten up name like this, establish an extremely low level where you wouldn’t mind buying the stock by selling a put or a put spread (put spread helps with margin). Establish a breakout area above where you’d the bet could pay off in the form of a call or a call spread. Do it for close to even (or even a credit!) knowing that the most likely scenario is the stock finishes between the two strikes. The stock may continue lower and you may be wrong but buying stock as it falls forces you into all kinds of bad decisions where you’re buying high and selling low, and getting all turned around on pops like this morning. It’s hard.

We’ll see how this morning’s move shakes out and look to adjust the stock alternative view, possibly adjusting expectations and targeting 20 rather than a breakout above 20.