On Wednesday I highlighted the recent bounce in shares of Twitter (TWTR) and the technical set up (here): 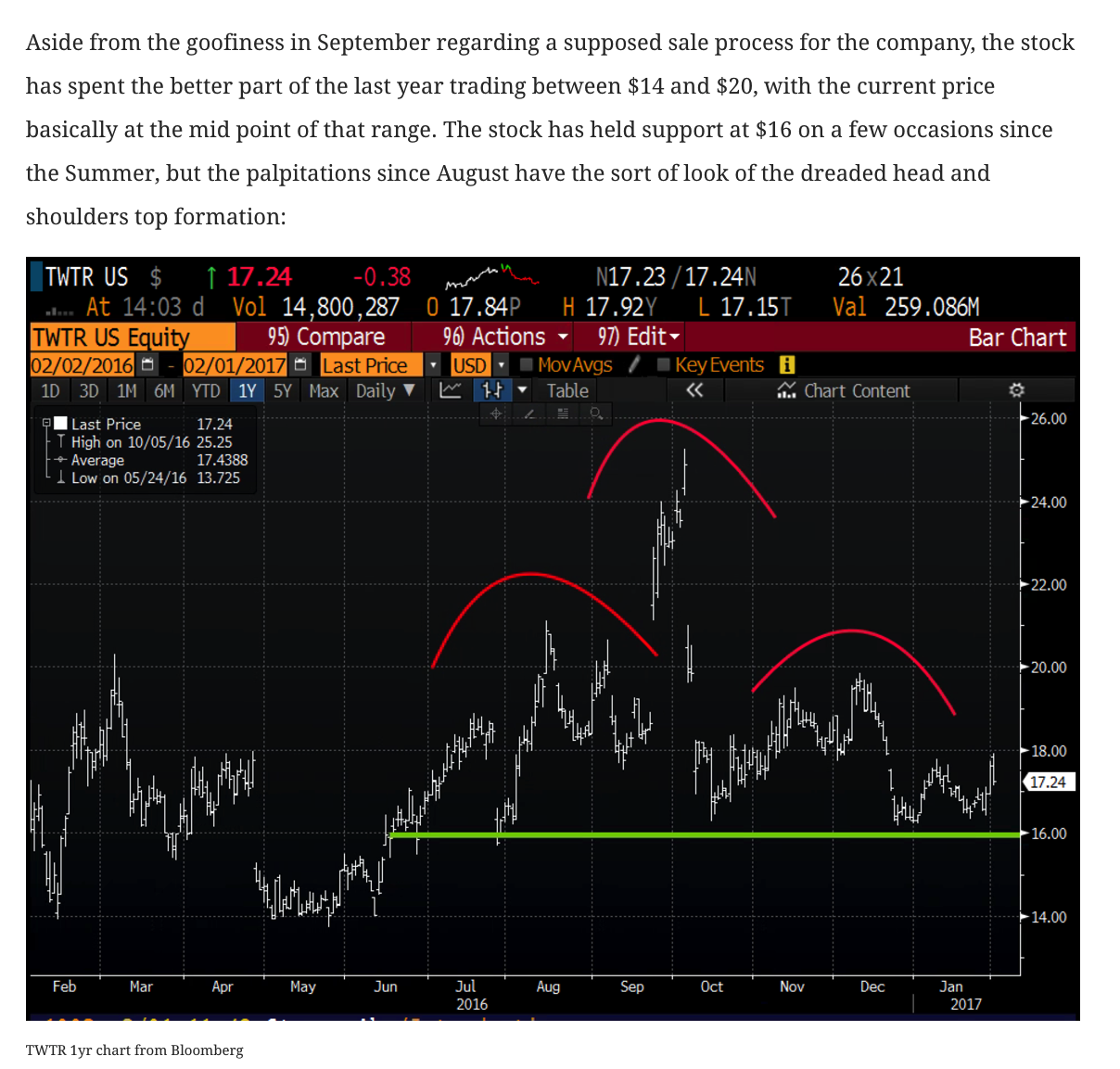 The stock is up a few percent since Wednesday, but the technical pattern seems fairly obvious.

The company is scheduled to report Q4 earnings Thursday Feb 9th prior to the market open. The options market is implying about a 10% move between now and next Friday’s close (most being priced for the earnings event itself), which is below the average one day post earnings move of about 12% over the 13 quarters the company has reported since IPO (the stock has risen only 3x following results).

As for the quarter, given the U.S. election, and Live events like Thursday Night Football, it should at the very least meet revenue and engagement estimates. Who knows on new users? Which leads to guidance, I have to think there will be a bit of a hangover after such a frenzied period of hyper engagement. I suspect guidance is below expectations.

Despite the stock’s recent bounce, sentiment could not be much worse. Wall Street analyst ratings are downright dreadful with only 5 Buys, 28 Holds and 8 Sells with an average 12 month price target of $16.50, below where the stock is trading, with short interest near 8% of the float.  For this quarter itself, expectations are not high. Even with that, weak guidance could still have the stock back towards $16, while very poor guidance could have the stock heading back to long term support near $14.

BUT… with Snapchat’s public filing of their IPO last night, and its impending roadshow prior to its offering that could come in early March, investors might awake to the fact that aside from Facebook, Instagram and Snapchat, their are few other mobile short messaging social platforms that exist at TWTR’s scale (315-ish million monthly active users).  While gaining new users has been a massive challenge for TWTR for more than a year, as revenue growth has stalled (expected 15% yoy in 2016 from 58% in 2015), the company has an enterprise value of $10.5 billion, and trades at 5x trailing 12 month sales of $2.5 billion (5x of SNAP’s last year). Investors might consider the scarcity value in both the public and private markets for such properties and come back to the stock in anticipation of a Google, Facebook or any number of other large platforms to reconsider a take-over. Sadly, while I think Jack Dorsey and CFO/COO Anthony Noto are the guys to run the company for now, I am not sure they are the guys who will fix the product and return the platform to a path of a billion users without the integration of a much larger platform.

If you agree with me that the stock is at risk of post earnings weakness, but the SNAP roadshow might have a halo effect on a company like TWTR at half the market cap, then it makes sense to play for a turnaround in the stock… but give yourself some leeway near term on a long entry in case of an earnings miss. I much prefer risk reversals to stock in a beaten up name like this, selling out of the money puts to buy out of the money calls. Keeping in mind near term technical support at $16, and long term technical support at $14, I like the idea of selling 15 strike puts and use the proceeds to help pay for out of the money calls. Us options peeps call this a risk reversal:

Rationale:  Just take a look at the chart since its 2013 IPO, while most of the price action above $30 was downright silliness, the stock could be getting near washed out enough to attract a buyer. If the stock were to decline close to the all time lows, that would place a value a market value on the shares of $10 billion with an enterprise value of only $8 billion. If SNAP gets its $25 billion and can go higher from there, TWTR won’t be a standalone for too long at only $10 billion.