With the new look for RiskReversal in 2017, we will also be tweaking some of our usual content to be a bit more focused on actionable ideas. This morning I thought it would make sense to introduce a new format for the MorningWord on Mondays, which will include a recap of Friday’s Options Action on CNBC, the implied movement in S&P 500 etf options, a look forward to some events on our radar for the upcoming week, and some reads I found interesting over the weekend. So let’s give it a whirl.

On Friday’s OA we opened the show with a short discussion of whether or not to stick with mega-cap tech stocks and I detailed (watch here) the trade idea discussed on the site on Friday afternoon to play for a breakout in Cisco Systems (Systems Go?). While I have no idea as to whether or not the stock will breakout on next week’s earnings announcement, I suspect there is a good chance the stock is above the prior high near $32 in the coming months, and the June call spread offers a favorable risk reward if you are positively disposed to the stock: 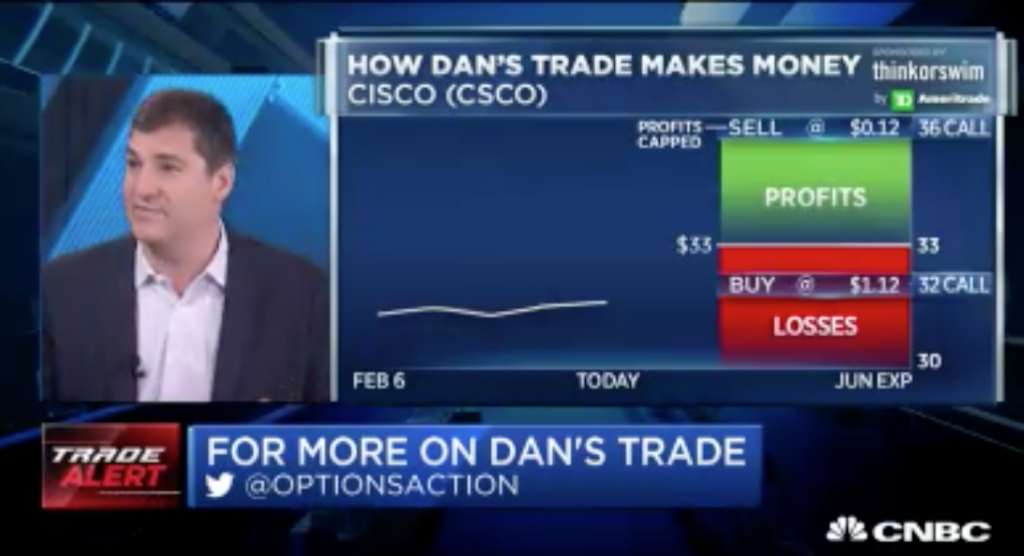 Carter Worth made a bullish technical case for a retest in Freeport-Mcmoran (FCX) of 2015 breakdown level of $20 (watch here). Here is the chart that he sees a head and shoulders bottom, just now breaking the neckline: 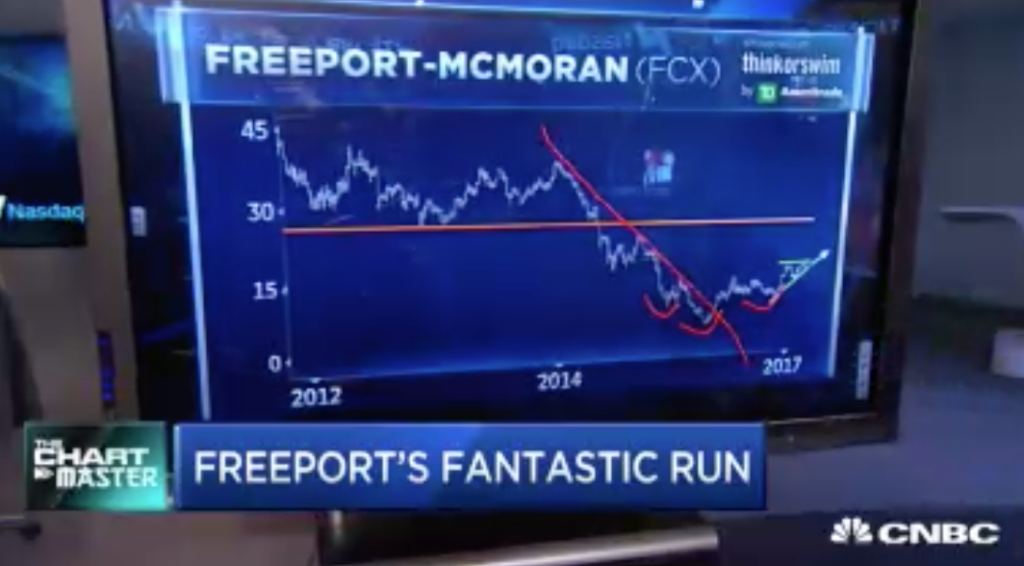 Mike Khouw detailed a bullish defined risk trade (vs $15.80 close), looking out to April expiration, buying the 16/19 call spread for about 85 cents, (buying 1 Apr 16 call for 1.20 and selling 1 Apr 19 call at 35 cents) offering max payout of up to $2.15 up to $19 on April expiration. That call spread is an ok risk reward, risk one maybe make a little more than two, Thinking about it another way, risking 5.3%, for a chance to make up to 13.5% of the stock price if the stock is 20% higher than current levels. I guess the only tweak I might add is that if you are that convicted of a sharp move higher back to technical resistance, you might consider widening the call spread to the April 16/20 for 95 cents, pay 10 cents more for increased potential profit of $1.

Implied Movement in the SPY, as of a $231.50 close, the SPY Feb 17th weekly straddle (call premium + put premium) went out offered at $1.81, if you bought that and the implied movement for the week you would need less than a 1% move in either direction to break-even, a rally above $233.31, or a decline below $229.69, umm seems kind of reasonable.

Earnings of Note: [Before Open = BO, After Close = AC]

Kate Kelly of the New York Times details what seems to be a real fact, that when it comes to the new President’s economic agenda, there is at least one grownup in the room: rump’s Economic Cabinet Is Mostly Bare. This Man Fills the Void – NYT

This chip maker is swimming against the tide, or at least the appearance that other tech companies feel compelled to project when it comes to new manufacturing initiatives: Plan for $10 Billion Chip Plant Shows China’s Growing Pull – NYT

Steve Sears, author of Barron’s Striking Price Column details an options trade strategy that could profit if shares of Twitter make new lows in the coming months or finally gets taken-out: A Speculative Trade on Twitter’s Rise or Fall. Steve also offered up two options books for those looking to learn more:Larry McMillan’s Options as a Strategic Investment and Sheldon Natenberg’s Options Volatility and Pricing. – Barron’s

Before we are too quick to turn back too many post financial crisis regulations, it might makes sense to take stock of how far we have come to defend against systemic risks in our financial system: Derivatives market is short of a $3.7tn lifeboat … Central clearing has not proved a magic solution for systemic risk- FT