Cisco (CSCO) will report their fiscal Q2 results Wednesday night after the close. The options market is implying about a $1.10 move in either direction between now and next Friday’s close, or about 3.2% in either direction. The stock has moved on average about 4.5% on the day following the last 4 quarters, while its 10 year average one day post earnings move is nearly 6%.

The low implied move is a function of the fairly complacent market we are in, with spot VIX near 10.50!

Yet I am looking at shares of wireless networking company Ubiquiti Networks (UBNT) trade down 15% today (which is up 10% from the morning lows) after making an all time high just yesterday on quarterly results that were not exactly up to snuff:

And shares of Activision Blizzard (ATVI) the video game maker are trade up 15% on better than expected results, making new all time highs:

The main takeaway, lets not be too complacent in front of events, even in a dull, slightly euphoric market. Despite low levels of implied volatility readings for the broad market and single stocks this earnings season, we have seen our share of single stock volatility post results, where investors are shooting first and asking questions later, or climbing over each other to buy stock on further confirmation of secular headwinds, or a pivot in a fundamental thesis.

Which brings me back to CSCO. If you were convicted that the stock was going to outperform the implied move to the upside Wednesday, then a short dated at the money call purchase would make a lot of sense, which would also make sense for existing longs looking to replace stock, or add leverage to their position. I would add that following the last two fQ2 reports in Feb 2016 & Feb 2015 CSCO rallied the next day 9.6% and 9.4% respectively. Now past performance in a specific quarter is by no means indicative of future results, but maybe there is something about how they have been guiding in fQ1. But the point is simple, if you thought the stock is inclined to move higher after results, and finally breakout above $32, which has served as technical resistance in the fall… 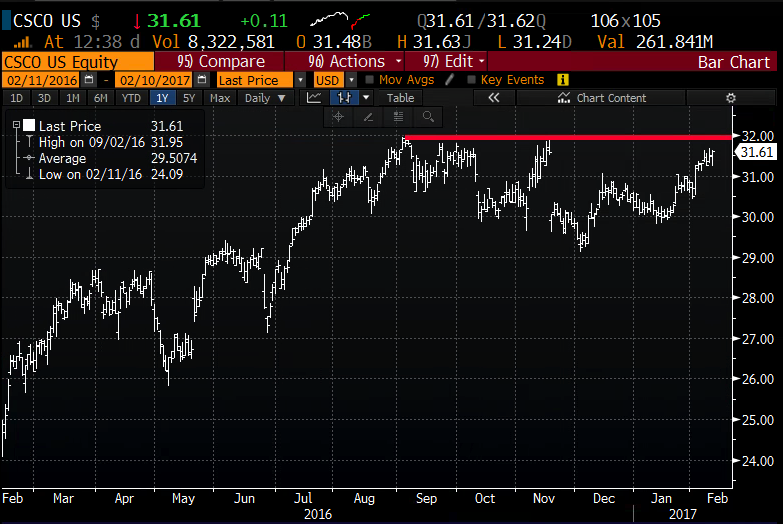 then buying the Feb 17th (next week) 31.50 strike call for 62 cents makes a lot of sense (vs stock at $31.60) for a trade. These calls break-even at $32.12, just above the technical resistance level identified above, and below the implied move in the options market.

The main word there is trade… so i’ll offer our usual disclaimer for long premium directional trades into events like earnings, you need to get a lot of things right to merely break-even, most importantly direction, but also timing and magnitude of the move.

BUT if you think that CSCO trading 13x expected 2017 eps, which buys back billions of its stocks annually, pays a dividend that yields 3.3%, has a CEO who literally has a seat at the table with the new President, should benefit by proposed tax reform & infrastructure spending and is keenly focused on diversifying away from legacy technologies then you might set your sights on a slightly longer time horizon to have a bullish thesis play-out. Looking at the chart dating back to 2000, there is barely any overhead resistance for as far as the eye can see:

Which brings me too the company’s body language. On Jan 25th I wrote (Cisco Kid You Not) about CSCO’s surprise purchase of AppDynamics for $3.7 billion on the eve of their hotly anticipated IPO that would value the company near $2 billion:

CSCO’s buy of the cloud based application performance management company seems to mesh with a handful of software acquisitions of the last few years on a strategic transition towards cloud-based software and services. CSCO CEO Chuck Robins explained the intent of the deal to CNBC this morning as an attempt to combine the (watch interview here):

Robbins highlighted the company’s rapid revenue growth, but failed to mention their mounting earnings losses on those sales, per Forbes:

AppDynamics — which faces competition from many places including New Relic — is growing fast and losing bundles of money. For the nine months ending September 2016, AppDynamics’s revenue grew 56% to $158 million and it lost a whopping $95 million according to its prospectus issued December 29.

But they face a massive revenue opportunity:

AppDynamics is going after a $12 billion market. The company believes that its “application intelligence software platform replaces legacy products across various well-established categories of IT spending.” Gartner, estimated that the IT operations market in 2016 would be $23 billion and the business intelligence and analytics market would reach $17.1 billion — resulting in a total addressable market (TAM) of $40.1 billion. AppDynamics targets a segment of that TAM — global companies with greater than $50 million in annual revenue in 2015 — totaling $12 billion, according to its prospectus.

While $3.7 billion is no small chunk of change, CSCO has $71 billion in cash on their balance sheet ($36 billion net of debt), and should be a massive beneficiary of proposed tax reform that will include cash repatriation.

I suspect this surprising move was done out of a position of strength, not by a company that is about to pooch the quarter and guidance.  The truth is though, I have no idea what they are going to print, which helps make the case to define ones risk into such an event, especially with options premiums as cheap as they are.

Oh and back on Nov 15th CSCO reported fiscal Q1 results and guidance that was met with investor disappointment. The stock declined 5% the next day with mixed results from key product segments. They blamed much of the weakness on the macro environment, per Barron’s Online:

Switching sales declined 7%, year over year, to $3.72 billion. Revenue from “Next-generation-networks” routing products was up 6%. The company’s “collaboration,” “data center,” “wireless,” and “service provider video” categories all declined, but security products revenue was up 11%.

Investors seem to like the AppDynamics purchase, with the stock up 3% since.

So what’s the trade?  If you are of the belief the company will not disappoint Wednesday night, then defining your risk over the next four months makes sense, targeting a near term breakout, with the stock establishing a new range above recent technical resistance… It probably makes sense to initiate a trade in front of an earnings event closer to the event, but I wanted to lay it out before a I do a bit more work on the story…

Rationale: While we generally don’t love owning out of the money premium in a low vol market, this call spread will catch two earnings events (fq3 should fall in May expiration), and we think it makes sense near term to target at least the 2007 high above $34 on a breakout: