Netflix (NFLX) will report its Q3 earnings after the close. The options market is implying about an 8.5% move in either direction or about $45. With the stock near $528 the Oct 23rd weekly 527.50 Straddle (the call premium + the put premium) is offered at $44, if you bought that and thus the implied weekly movement you would need a rally above $571.50 or a decline below $483.50 to make money by Friday’s close. NFLX has moved about 3.5% on average over the last four quarters.

Shares of NFLX are up 64% on the year, up  82% from its March lows, but interesting down at those levels the stock did not make a new 52-week low in March, and outperformed the market, down 25% from its February highs vs the S&P 500 (SPX) which was down 35% intraday on March 23rd.

Since making a new all-time high in early July the stock has been rangebound, finding technical support near the breakout level near $470 and technical resistance between $550 and $570: 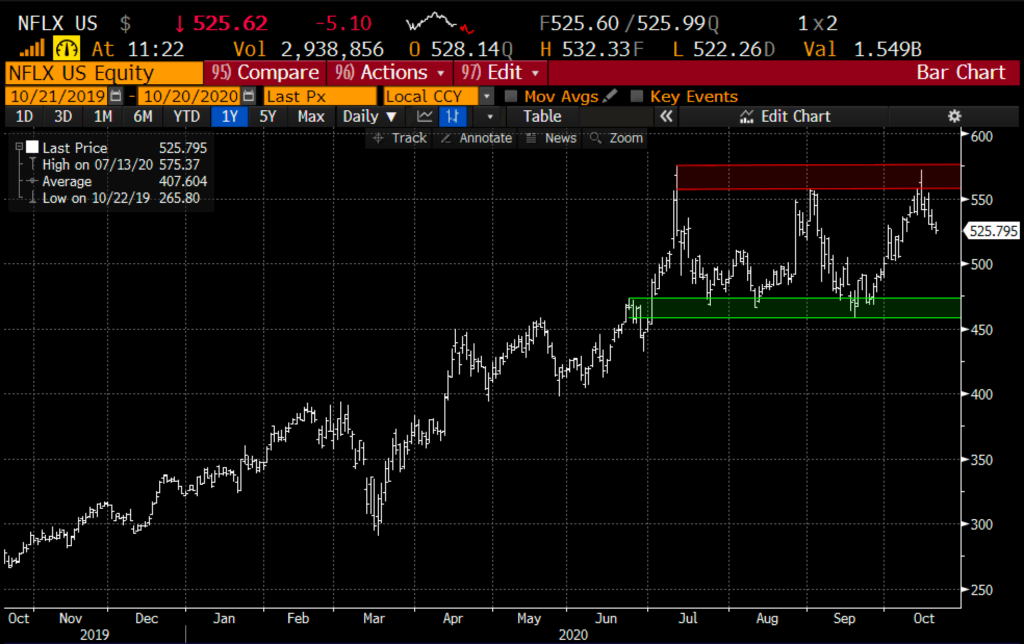 Expectations into the Qtr:

Jared Weisfeld Tech Specialist from Jeffries: expectations are ratcheting higher with shares +65% YTD and pegged on highs into the print. After a disappointing print last quarter and NFLX being used as a source of funds by many, the narrative has changed significantly with investors focused on 2021 price hikes, a 2H 2021 loaded slate, and potentially the easiest name to own from a regulatory standpoint in the context of a Blue Sweep. As a reminder, NFLX added a Q2-record 10.1m paid members vs. 2.7m in last year’s Q2 and in the first half of this year, NFLX added 26m paid memberships, nearly on par with the 28m they achieved in all of 2019. Investors have been paying attention to the slowing growth of paid subscribers and NFLX subsequently guided Q3 2020 to 2.5mm paid net adds. Buyside is looking for 4.5mm paid net adds in the September Quarter and 6mm into the December quarter (vs. the street at 5.3mm). Buyside wants 2H paid subscribers to come in around ~10mm across Q3/Q4. Expect any expectation related weakness to be bought given the 2021 setup as NFLX climbs the decel wall of worry. 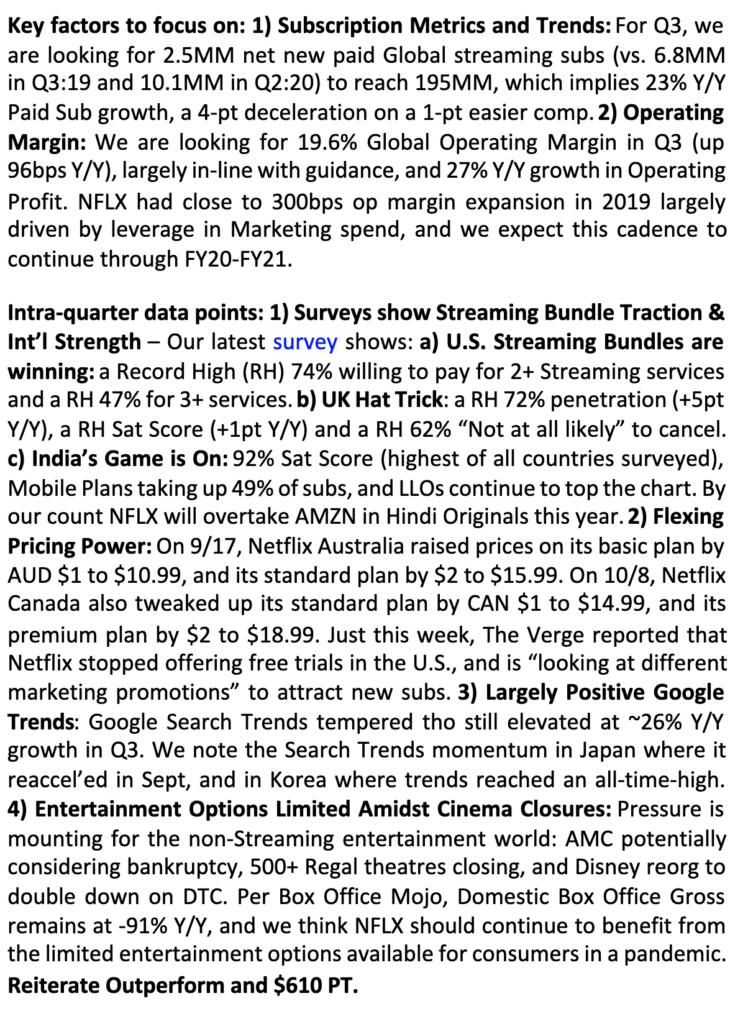 MY TAKE INTO THE PRINT: Mark highlights NFLX pricing power internationally and Jared highlights expectations for price hikes next year in the U.S. but also a substantial net add in paid subscribers in Q3. If the whisper number is already 2 million above the 2.5 million guidance I suspect this may be a high hurdle in a quarter where people finally got out of the homes as the weather got better in the summer. IMO it will take a substantial beat and raise to have this stock trading at new highs tomorrow.

If I were long the stock I might consider overwriting the stock, selling a weekly call near the implied move, which also happens to be technical resistance, for instance:

Profits of stock up to $570, if the stock is below 570 the call seller would receive the 7.75 in premium. If above the effective call-away level is 577.75. The long stockholder could always buy to cover the short call to keep the long stock position intact if above the short call strike price prior to expiration on Friday’s close.

For those with a directional inclination, the at the money call or put in the weeklies costs about $22, half the implied move, or about 4.1%, which is greater than the average move over the last four quarters.

You need to get a lot of things right to merely break-even on a long premium directional trade into an event like earnings where options premiums are severely elevated, first and foremost direction, then magnitude of the move and of course timing. this is a tough way to make consistent profits.