IBM has massively underperformed the broad market and many of its tech peers, down 5.5% on the year, and spending most of the last seven months in a range between $116 and $130: 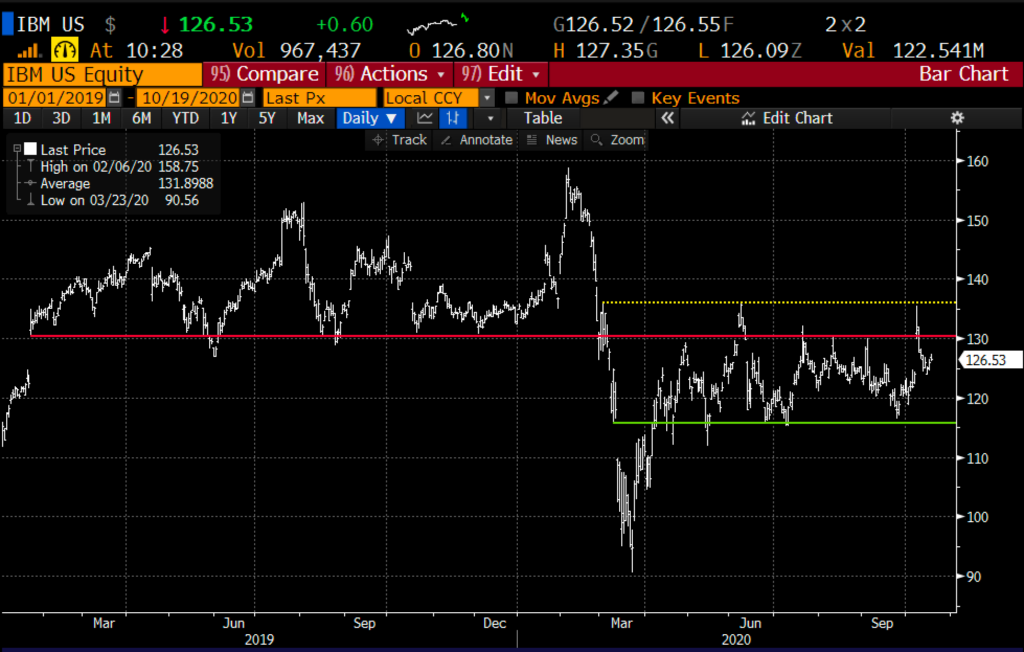 On Oct 8th the stock gapped up nearly 10% on news that the company would “spin-off its $19 billion managed-infrastructure services business while zeroing in the rest of the company on hybrid cloud software and services…” per Barron’s:

The tech giant said it expects to complete the transaction via a tax-free spinoff to shareholders by the end of 2021. IBM said the combined companies will pay dividends no less than its current rate. The business to be spun off—the new company will be named later—accounts for about a quarter of IBM’s total revenues. IBM did not name a leadership team or board members for the new company.

IBM said it plans to take a $2.3 billion charge this year to reflect “structural actions” to streamline its business. The company said it is “streamlining its geographic model and transforming its go-to-market structure to better engage with and support clients,” but did not detail any expectations for staff cuts or facilities closings.

CEO Arvind Krishna said in a statement that the company will now be “laser focused on the $1 trillion hybrid cloud opportunity,” referring to computing systems that combine “private clouds” operated by companies themselves and “public clouds” from tech firms like Amazon.com (AMZN), Alphabet (GOOGL), Microsoft (MSFT), Oracle (ORCL) and IBM itself.

In the trading days since IBM filled in most of that gap: 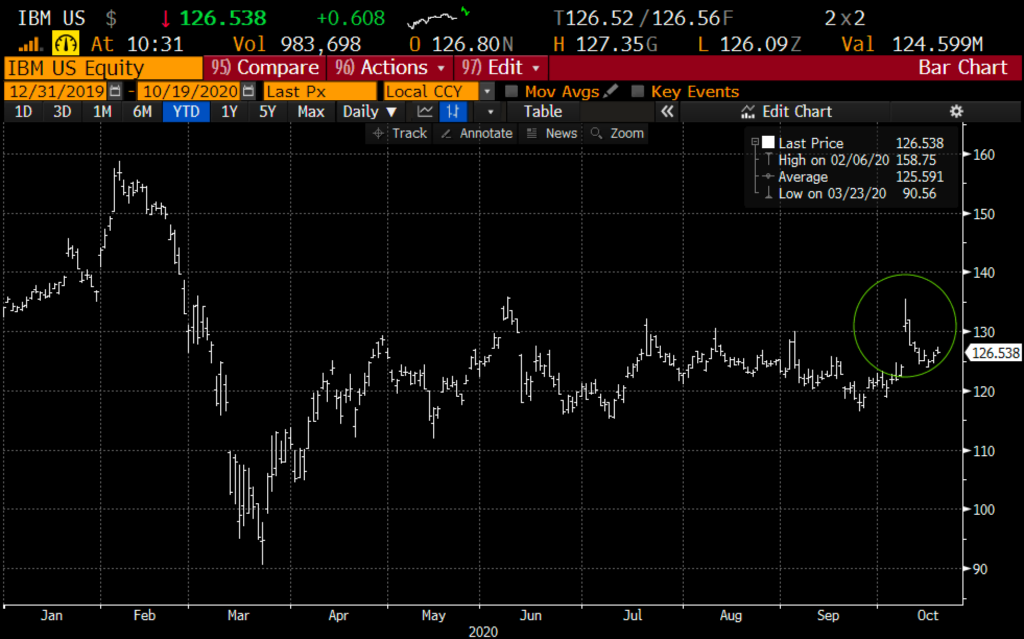 It is worth noting that if the move was an attempt to change the narrative a bit with investors and Wall Street analysts, it did not do much as the street is generally on the sidelines with the stock, with only 6 Buy ratings, 10 Holds, and 2 Sells. One of those Buy rated analysts, Matt Cabral from Credit Suisse suggested in a note to clients that the “Spin-off sharpens the focus and accelerates the hybrid cloud thesis” and he sees a sum of the parts of $171: 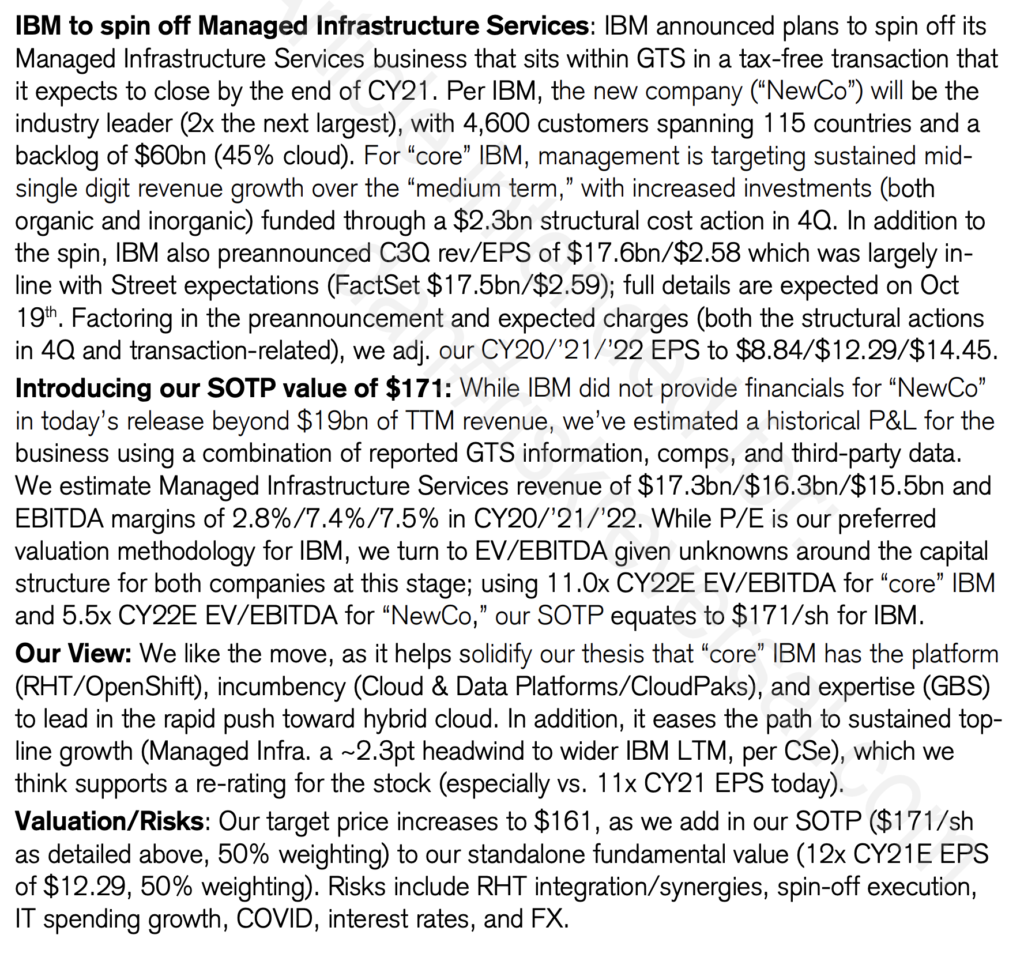 The stock’s initial gap and then crap suggests that investors and analysts are waiting for more detail on tonight’s earnings call.

The current consensus is calling for a 15% eps decline and a 4% sales decline in 2020, followed by 12% and 4% increase respectively in 2021. IBM trades at about 11.5x 2020, and 10.5x 2021 eps, but that is about to get as clear as mud with the process of the spin. IBM has been a perennial value trap for a reason and I suspect one part of this company will do well after the spin and even the other slower-growing part in the right market will also outperform expectations, once the kitchen sink is thrown.

Near-term investors might take a wait and see which could result in a re-test of the mid-teens on a worse than expected Q4 outlook.

If I were inclined to play for a that I might consider a short-dated put butterfly, for instance:

If you are inclined to play for a move back towards its Oct highs near $135 and a potential early 2021 breakout, consider call calendars, selling short-dated out of the money call premium, and using the proceeds to help finance the purchase of longer-dated calls of the same strike, for instance:

The idea situation is that the stock trends towards 135 between now and Nov expiration and the short Nov call expires worthless below 135 or is covered for a small amount prior to expiration, leaving long the Jan 135 call which has gained in value as the delta of the option has increased offsetting the decay over the next month. At which time, depending on where the stock is trading one could turn again into a call calendar, further reducing the premium at risk, or turn into a vertical spread by selling a higher strike call in Jan.