From July 1st to Sept 2nd the Nasdaq rose about 20%, leaving many investors/ traders/ pundits scratching their heads as to the reason for the daily new highs. 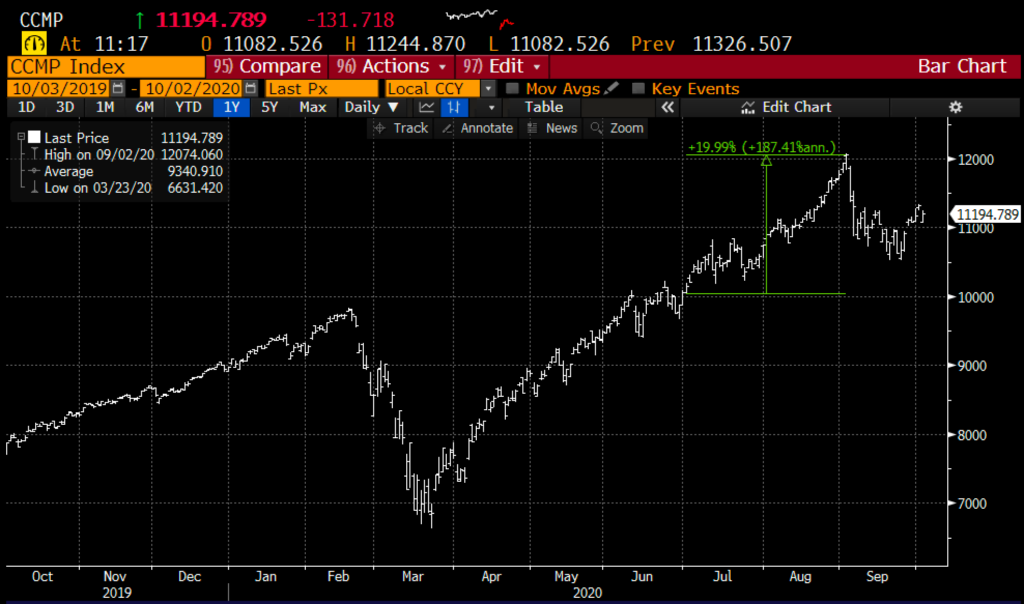 Sept had a different feel resulting in a 13% peak to trough decline. What was extraordinary about the August gains, in particular, was that the breadth was getting narrower and narrower, meaning the largest stocks, with extraordinary year to date gains seemed to be doing all of the heavy lifting.

In early September a picture started to emerge of a large buyer of upside calls in the largest Nasdaq stocks, piggybacking heavy retail flow in the same names, as the FT described it last month creating a unique market dynamic:

During the sell-off in September, it emerged that Softbank was in fact the large buyer of call options in many of the largest Nasdaq names, relentlessly buying upside calls, getting market makers short vol all over the street, and scurrying to hedge.

The WSJ reported on Sept 3rd, the day after the market topped out:

Before this week’s retreat, Apple Inc. had gained nearly $700 billion in market value since the end of July and Tesla Inc. shares more than doubled, making the electric car maker one of world’s 10 most valuable companies.

Regulatory filings show SoftBank bought nearly $4 billion of shares in tech giants such as Amazon.com Inc., Microsoft Corp. and Netflix Inc. this spring, plus a stake in Tesla. Not included in those disclosures is the massive options trade, which is built to pay off if the stock market rises to a certain level and then lock in gains, the people said.

SoftBank bought a roughly equal amount of call options tied to the underlying shares it bought, as well as on other names, according to people familiar with the matter. It also sold call options at far higher prices. This allows SoftBank to profit from a near-term run-up in stocks and then reap those profits by unloading its position to willing counterparties.

Earlier today on CNBC David Faber reported on some options action that looked very much like the buying we saw from Softbank over the summer:

What’s interesting about the timing of the buying this time around is that it comes after a mini-correction, not as the market was breaking out to new highs after roundtripping its entire move back to its prior highs made in February. There was still a lot of optimism about the pace of the economic recovery accelerating, of developments of therapies and vaccines for the coronavirus and of course additional stimulus.

Since then though, we have seen a deceleration in the pace of the recovery, pushouts of expectations for a vaccine, a massive delay in the continuation of expanded unemployment benefits with little visibility on additional fiscal stimulus, and now an election that seems to be more contentious by the day with no shortage of uncertain outcomes not priced into the stock market (imo).

Let’s look at the QQQ, the etf that tracks the Nasdaq 100, where F’ MAGA (Facebook, Microsoft, Apple, Google & Amazon) make up 45% of the weight of the index and equal more than $6.5 trillion in market capitalization.

The QQQ broke the uptrend from its March lows in early Sept and has yet to make a meaningful challenge to regain it, it has healthy near-term support near $260 with the next real support below that just above its 200-day moving average near its late June low: 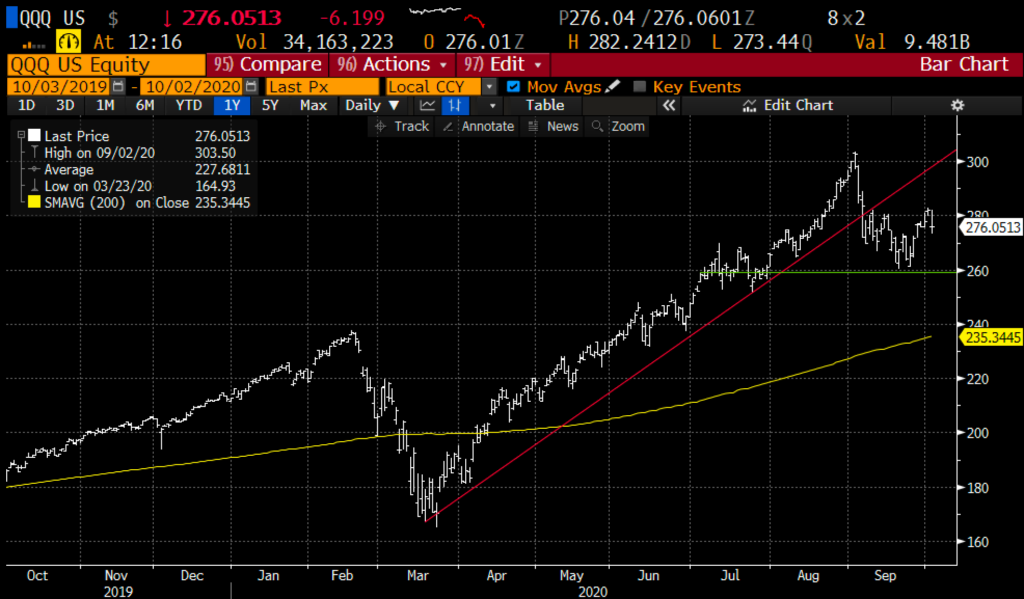 Short-dated options premiums in the QQQ have remained elevated this month with the downward volatility, but not much above where they were trading in July and August when the NDX was making daily new highs, there was tremendous demand for calls of the underlying stocks on the way up, and likely similar sort of demand for puts on the way down. I don’t see options prices coming in much over the next couple months, making premiums look fair to cheap for those looking to express directional views:

When I say cheap to fair I mean in vol terms but for those looking to hedge a portfolio of mega-cap tech stocks between now and Nov expiration with the QQQ at $276, the Nov 275 put would cost ~$14, or about 5% of the etf price with a break-even down at $261, just above technical support.