Tomorrow morning we get the last monthly non-farm payrolls number before the election, a day after today’s weekly jobless claims that came in at 837,000, a tad “better” than expectations, but as CNBC.com highlighted this am:

the overall trend remains stubbornly high, with the four-week moving average of first-time claims edging lower by just 11,750 to 867,250. Prior to the pandemic, weekly claims had been around 200,000.

The concern about tomorrow’s data is that we see a deceleration in the pace of returning people back to the workforce and the lag of expanded unemployment benefits could be the start of another dip in consumer spending as we head into the fourth quarter.

Economist David Rosenberg tweets in so many words… remember what we are celebrating today in the minor beat to weekly claims:

Initial jobless claims are still in the top 0.1% readings of all time, in the face of massive policy stimulus and five months of re-openings, and we have “pundits” celebrating the fact that they are at the lows since the COVID-19 outbreak. What passes for good news these days.

I think it is safe to say that most Americans are hoping for a recovery that re-employs many of the workers who have lost their jobs since the start of the pandemic when the unemployment rate was at more than a 50 year low, but headlines just this week suggest that despite some parts of the economy (in both industry and geography) have been rehiring, we are starting to see large rounds of layoffs in some industries that were doing their best to hold on to furloughed workers, per Bloomberg:

This comes as both the House and the White House appear to both want to introduce a new fiscal stimulus, they just can’t decide on who to help, how much to give, and for how long. The downward volatility in the S&P 500 (SPX) in Sept, at its worst a 10% peak to trough decline had somewhat to do with the wavering commitment to further fiscal stimulus despite the fact that Fed Chair Powell on more than one occasion in Sept suggested that his commitment to easy monetary policy and related stimulus would be vastly aided by more fiscal, it seems that there is not a great appetite for it in the Republican lead Senate, despite it likely being useful to the president’s election prospects and wanted by the Dem led House who passed a bill now be negotiated on weeks ago.

The SPY, the etf that tracks the SPX has been rejected the last two days at what is proving to be an important technical resistance level near its February high just below 3400 / $340, having just found support near $3200 / $320 last week. 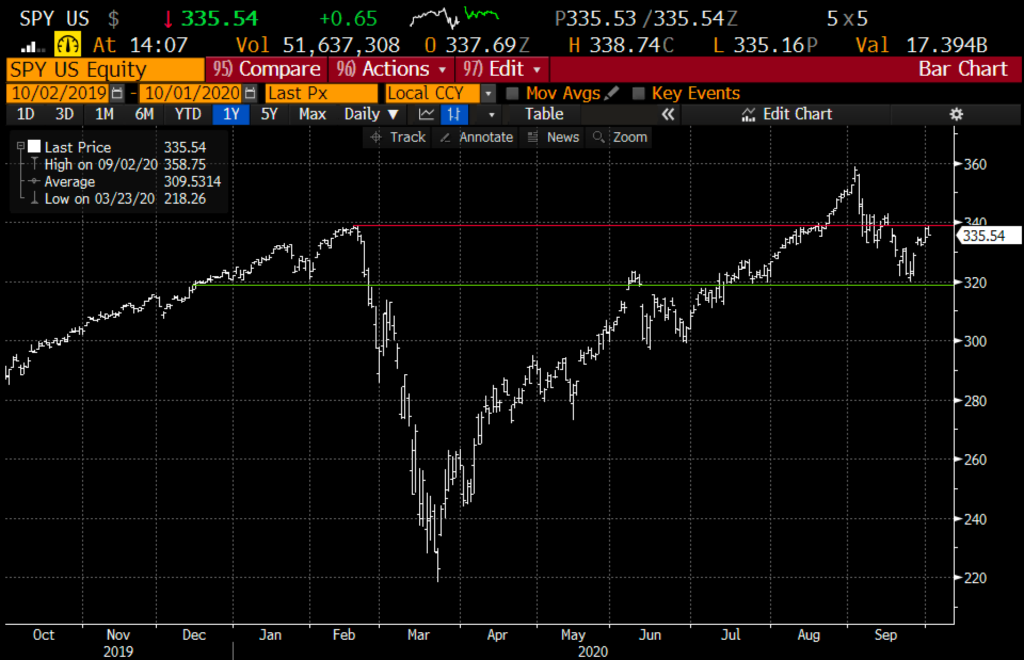 With the SPY just above $335, the Oct 2nd tomorrow expiration 335 straddle (the call premium + the put premium) is offered at about $4.90, or about 1.5% of the stock price. If you bought that because you felt like the SPY will move a lot tomorrow, but you are unsure of the direction you would need a rally above $339.50, or a decline below $330.10 by tomorrow’s close to make money. While that doesn’t seem like a lot, on a daily basis it is, and this trade has a high probability of losing al little and a low probability of making a lot. As we saying the biz, not a great risk-reward. But for those who have a strong conviction on direction, an at the money put or call would only be risking about 75 bps, or about $2.45, but again this is quite binary, get the direction wrong and the trade will be near worthless by lunchtime.

But If I were considering playing for a rejection at resistance and re-test of the 3200 / 320 level from last week I might consider the following put spread in next week’s Oct 9th expiration:

Rationale: this trade idea risks about 1% of the SPY for 6 trading days into a potentially volatile even tomorrow with a max potential payout of 3x the premium at risk with a break-even down only 1.25%. This is a good risk-reward for those looking to define their risk with a strong directional inclination.

Lastly, this jobs data tomorrow will have more than the usual significance if we consider the history of the polarization of economic date right before a presidential election.