ICYMI, the U.S. does not want our closest ally, the United Kingdom to use the Chinese telecom equipment behemoth, Huawei’s solutions to build out their 5G networks. I think there is little argument in the West that the Chinese have undue influence over their tech companies and the risks posed by building out our next-gen communication systems developed under the eye of the Chinese Communist Party is a risk to our, and our allies’ security. 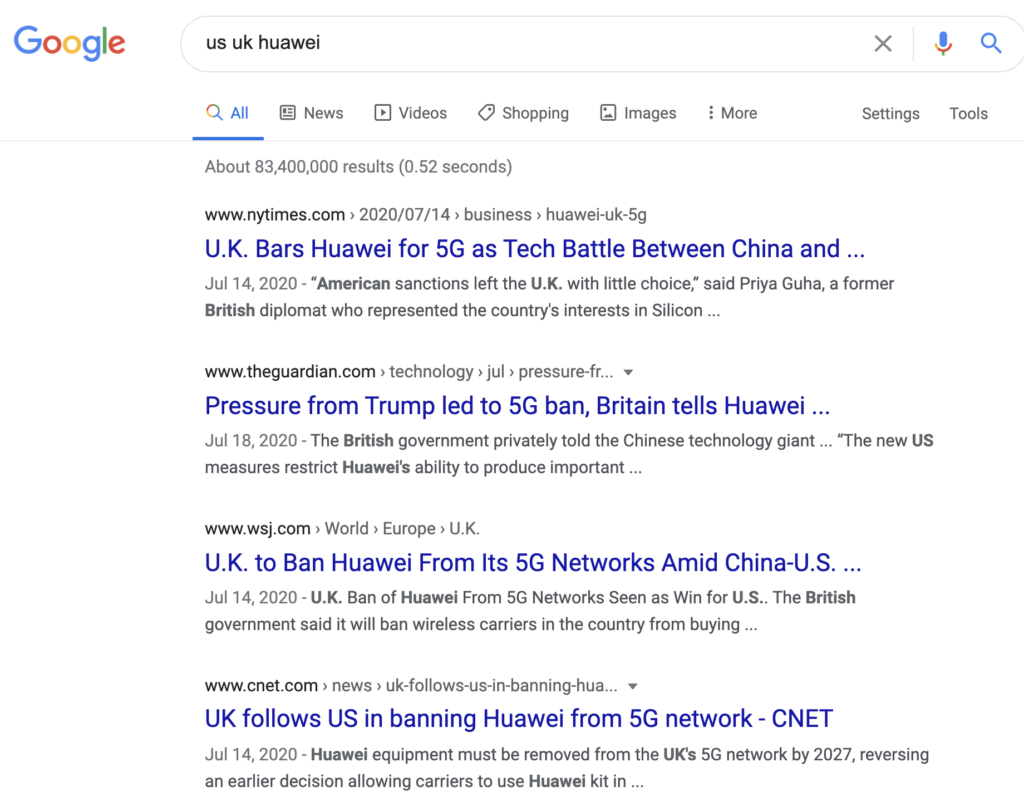 This article in Bloomberg caught my eye this morning, as there are few alternatives that large telecom providers can turn to in the absence of Huawei, Nokia (NOK), and Ericcson (ERIC) seem poised to fill the void. 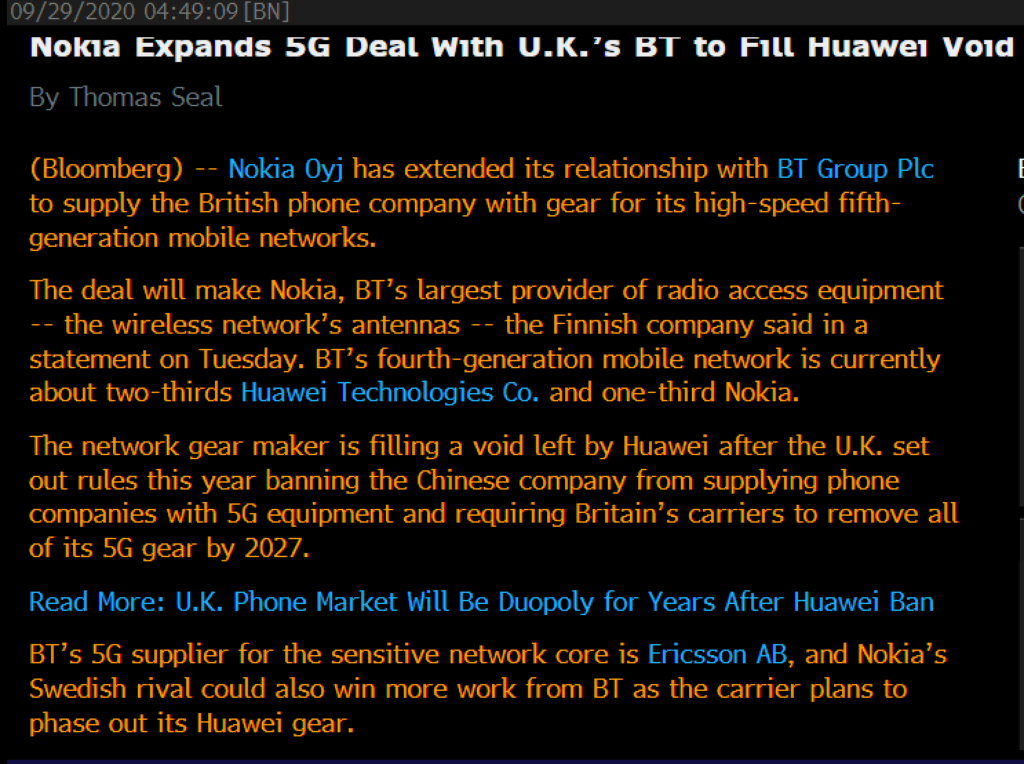 Back in late July shares of ERIC broke out to a multi-year high on better than expected results that were buoyed by 5G wins, per Barron’s:

the Stockholm-listed company further strengthened its position within 5G during the second quarter, saying it had won 99 5G commercial contracts, compared with rival Finland’s Nokia,which Ericsson said has 79. Ericsson increased its global forecast for 5G mobile subscriptions to 190 million by the end of this year.

In April, it won more than 11% of a $5.6 billion 5G tender announced by China Mobile,the country’s biggest operator, while in June, Telefónica Deutschlandchose Ericsson for its German core mobile network. More recently, it announced that Canada’s first 5G network, Rogers Communications,had chosen it as the sole supplier for its 5G radio access network and 5G core network.

Mellender expects U.S. 5G investments in North America, where it already has a significant market share, to pick up in the second half of the year now that the T-Mobile-Sprint merger has been completed and rivals, including AT&T and Verizon, continue to build out their 5G networks.

Ericsson is well positioned to benefit from the Trump’s administration’s efforts to block China’s Huawei Technologies from Western 5G networks, including in Europe and the U.K., which on Tuesday ordered all Huawei’s kit to be stripped out of the country’s 5G mobile network, in the wake of U.S. sanctions.

Around the same time shares of NOK popped on their outlook, per Barron’s:

The Finnish telecommunications maker said net profit for the quarter rose 21% to €311 million, despite sales falling 11% to €5.1 billion, as it made better-than-expected profitability improvements. The sales dip was driven by the impact of Covid-19 and the company’s decision to take a more “prudent approach” to deal-making in China.

It said the coronavirus pandemic had a €300 million negative impact on net sales in the quarter, but expected most of those sales to shift to future periods, rather than being lost.

Nokia has struggled to secure 5G contracts from Chinese telecom companies but it did strike a deal in June to deliver around 10% of China Unicom’s core network. The “high level of competitive intensity” and its prudent approach to grabbing market share led to sales in China falling 41%, it said in its second-quarter results. Nokia is one of three major providers of 5G networks, along with Huawei and Swedish company Ericsson. The Finnish company said it has now concluded 83 5G deals.

Credit Suisse’s Telco Research team was out with a note this morning, adjusting estimates for both ERIC & NOK this am, they prefer ERIC: 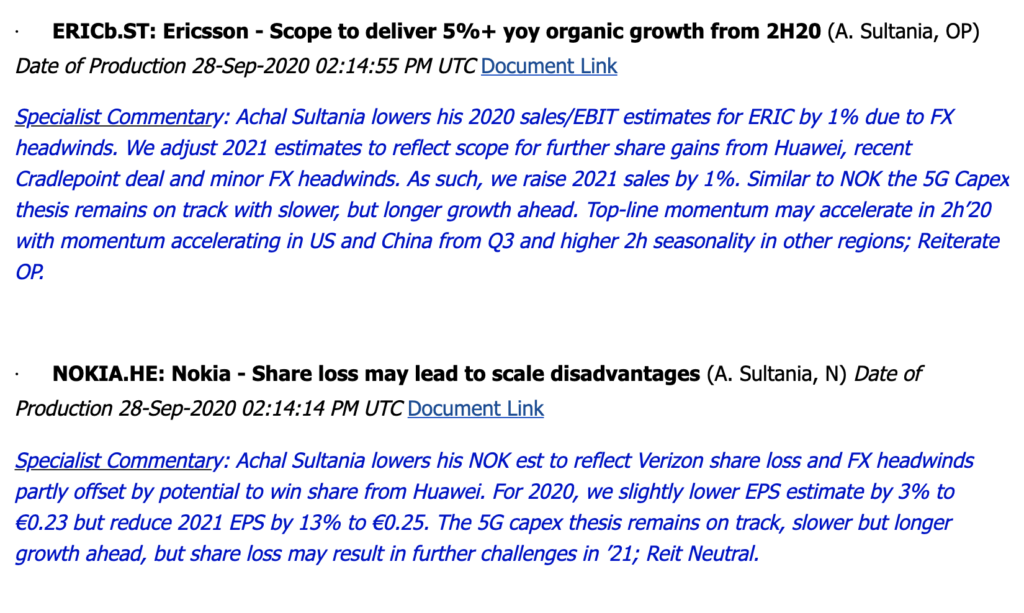 Despite today’s contract announcement, shares of NOK have given back most of its early gains, trading down 23% from its mid-summer highs: 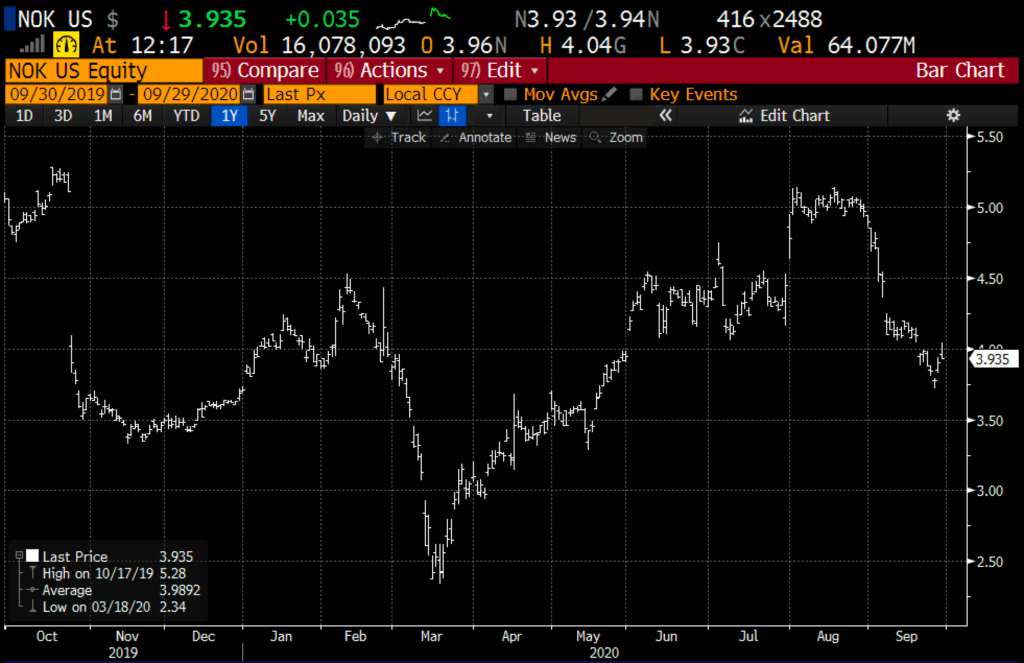 ERIC has faired a bit better than NOK of late, down about 10% from its late August, high, filling in most of its earnings gap and finding technical support where it should have, near its breakout level: 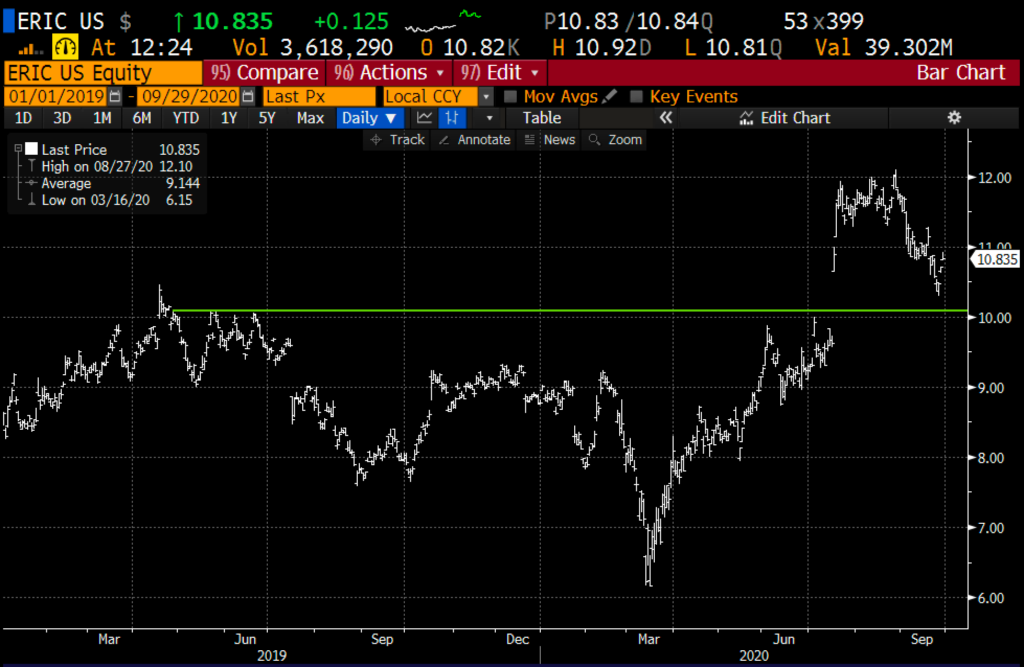 The next identifiable catalyst for both companies will be their Q3 earnings, for ERIC on Oct 21 and on ct 29 for NOK.

For those who want to play for a move back to the prior 52-week highs, in ERIC that was $12.10 on Aug 2020, and for NOK at $5.28 on Oct 2019, or possibly a breakout to new ones on better than expected results consider near the money calls or calls spreads in Nov expiration.

-The straight call risks 5.5% of the stock price, while the call spread risks 4.5% and has a max payout of 3x the premium at risk.