Trian Fund Management LP, a hedge fund known for pushing big companies to make operational and other changes, has launched an activist campaign against Comcast Corp. in a bet that the cable-TV and entertainment giant’s stock is undervalued.

Trian has accumulated about 20 million shares in Philadelphia-based Comcast, for a roughly $900 million stake or about 0.4% of the company, a person familiar with the matter said. Comcast’s market value is about $200 billion.

Trian is known for encouraging changes at companies it targets, such as a breakup or sale of underperforming divisions or moves to improve efficiency and better use capital. It often seeks board representation and tries to avoid public spats, unlike some of its more pugnacious rivals.

Yesterday on Comcast owned CNBC, analyst Craig Moffett weighed in on what Trian might be interested in pushing the company to do, which at the very least could be to “shed light on just how cheap the company is”:

Shares of CMCSA are up only 2.3% on the year, very near its prior high from February, that in March looked like an epic double top, but now once again approaching technical resistance in the $46 to $48 range: 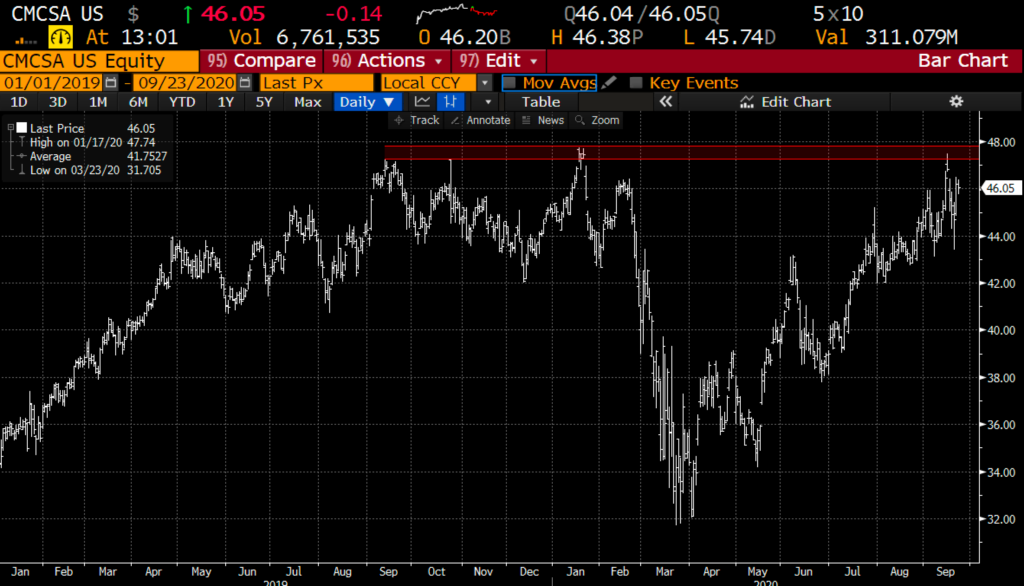 The next identifiable catalyst for CMCSA will be its Q3 results on Oct 29th. For those that think Trian will play nice, and CMCSA is willing to appease them to some degree to make everyone happy, then owning calls over the next couple of months could be a great way to define one’s risk while also playing for a breakout to new all-time highs.

Another way to express this view, playing for more of a consolidation in the near term would be with a call calendar selling a short-dated out of the money call near the $48 technical resistance level and using the proceeds to help finance the purchase of a longer-dated call of the same strike, for instance:

The ideal scenario is that the stock closes just below the 47.50 strike and the short call expires worthless of can be covered for pennies depending how close the stock is to the strike. If the stock has rallied the hope is that the long Nov 47.50 call will have gained value and the rise in delta will have offset the decline in theta (decay) and of course the trade will have lowered the cost of owning the Nov 47.50 call as the premium received for selling the Oct call reduced the cost of the trade signifiganty. On Oct expiration one could consider selling a higher strike call in Nov expiration creating a vertical call spread further reducing the premium at risk. The max risk of this trade idea is 95 cents or about 2% of the stock price.