There has been a lot of talk about in trader circles about just how parabolic the move higher in tech stocks was in August, the fact that the Nasdaq 100, measured by the etf QQQ made its first close last week below its 50-day moving average in 5 months highlights how long it has been since we have seen a proper correction: 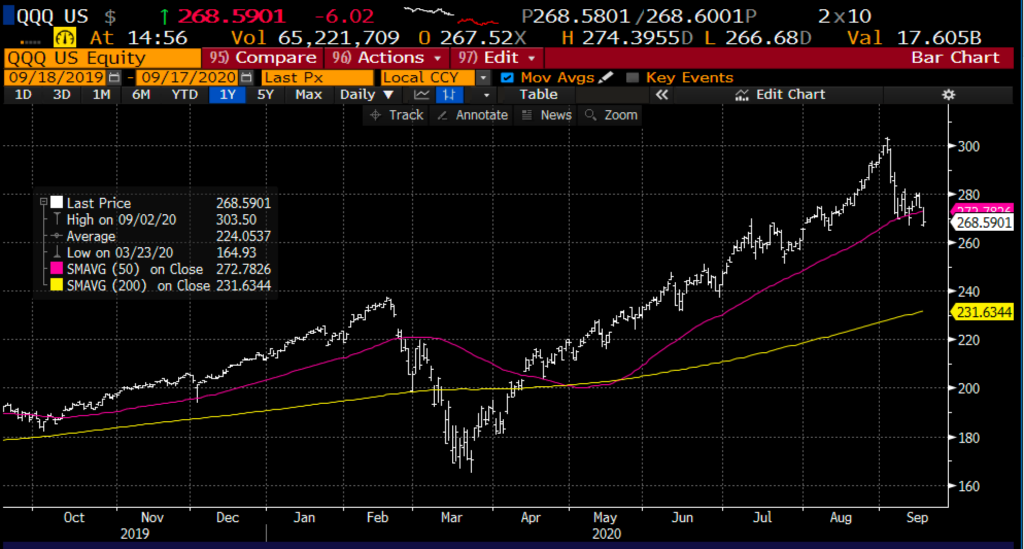 Yesterday in a post (Wake Me Up When September Ends – QQQ) I discussed some of this near-term over-exuberance and showcased some of the bad technical set-ups in the largest and best-performing stocks in the QQQ.

Which is why I think it is notable in a day like today, with the QQQ down more than 2%, down nearly 12% from its September 2nd low to find a tech stock that is actually rising above its 50-day moving average, as in the case with shares of LYFT today, which I would also add is picking its head up above the downtrend that has been in place since the day of its IPO pop in March of 2019: 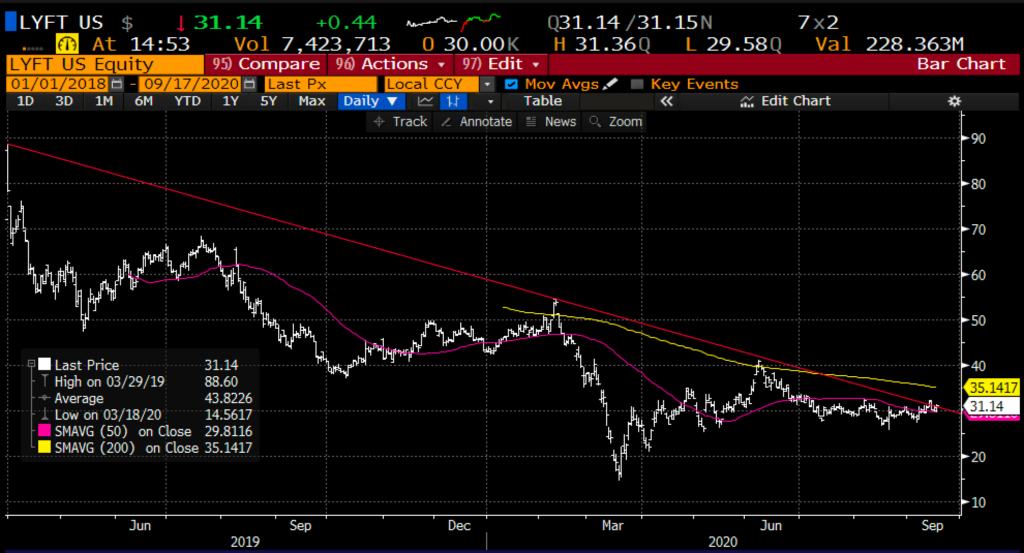 I don’t bring this up because I see an imminent trade in the stock, clearly if the virus were to mysteriously disappears and life was going to get back to normal rideshare would be a massive beneficiary, but it doesn’t change the fact the company will still be losing money on every ride they serve. LYFT is expected to have a 30% year over year revenue decline from $3.6 billion last year to $2.5 billion this year with their GAAP loss expected to drop from $2.6 billion to $1.6 billion. I guess that is the silver lining? The company is not expected to book a GAAP profit until 2025! All that said, the company has plenty of cash on their balance sheet ($2.77 billion, $1.77 net of debt) and with an enterprise value of just under $8 billion, this company IMO will make an interesting take-out target for a large tech platform company that’s business is collecting its user’s data.

So what’s the trade? Aside from playing for a short term breakout back to the mid to high $30s I don’t really see an emergency in this tape to get long anything especially a stock who is bleeding money and is one of the hardest-hit groups during the pandemic. But the whiff of a real widely available vaccine into year-end that could get things back to normal in mid-2021 and stocks like LYFT will take off. Call Calendars might make sense for those looking to put on some long (ish) exposure with defined risk and leg into a longer-dated call. The Jan 32.50 – 50 call spread (vs $31.20) is offered at $3.35, or about 10% of the stock price, but that is not that attractive with a break-even at $35.85, up 15% with a maximum potential gain of 45% if the stock is up 60% in 4 months. To get that sort of price action you would need a take out.

I highlight the name because of its price action in a nasty tech tape today and the interesting technical set-up. We will revisit when we can identify a fundamental catalyst.