My Friend Tom Lee, Founder and Head Strategist of FundStrat Global Advisors this morning in his client note continued to make the case about why the current rotation out of growth and into cyclical value (the hardest-hit groups) in the stock market is likely to continue as investors start to focus on where the bulk of a 2021 earnings per share increase will come from. 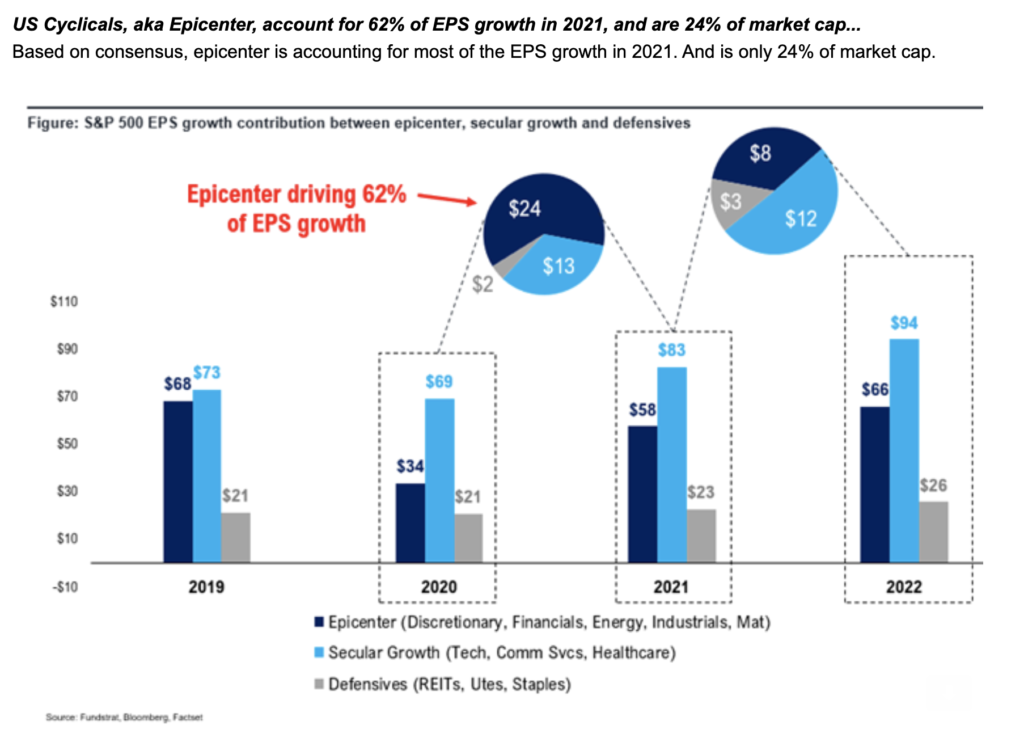 Tom’s call is not that the growth-trade, the so-called “winners” of the pandemic are about to crack, just that laggards like Financials, Energy, Hospitality/Travel & Industrials are about to go on a massive run. Tom highlights the weak U.S. dollar as aiding this trade, specifically in energy and materials, while the rise on interest rates could breathe new life into money-center bank stocks.

Bank stocks as measured by the XLF, the S&P Financials Select etf has made a series of higher lows from its March lows and is once again approaching key technical resistance between $26 & $27 and its declining 200-day moving average which was where it failed in early June, the last time investors were focused on this sort of rotation: 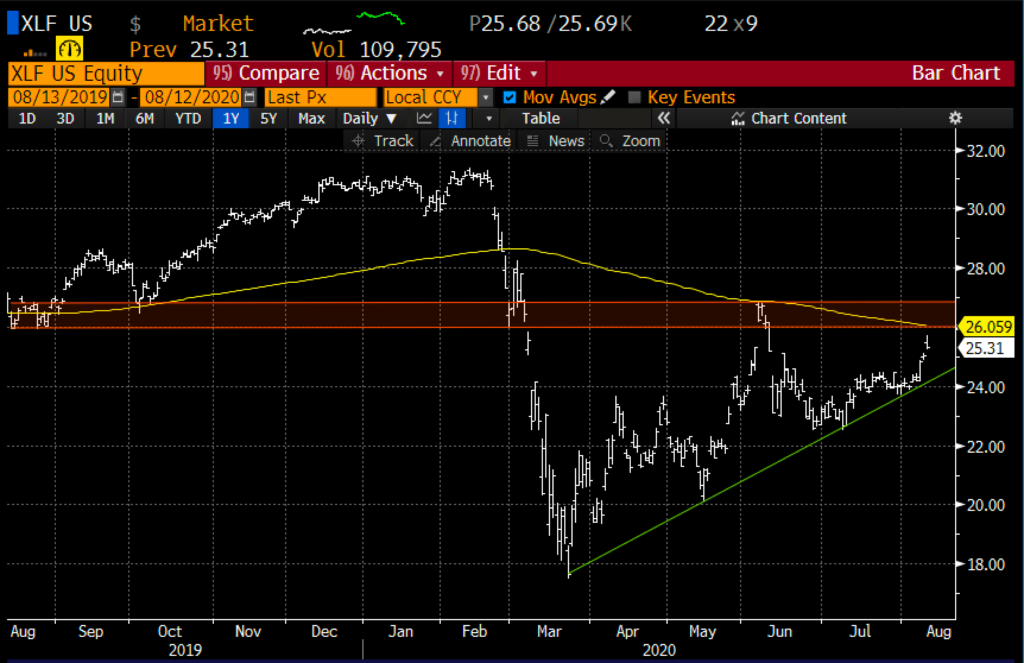 The XLE, the S&P Energy Select etf is also in a technical resistance holding pattern, and the next few days could determine which way it breaks. The assumption that the dollar will continue its sharp decline from its 2020 highs is not a given in my opinion, and any disruption to the re-opening trade and Oil is back below $40 and major integrated oil stocks again approaching multi-month lows after a daily anemic bounce from their March lows: 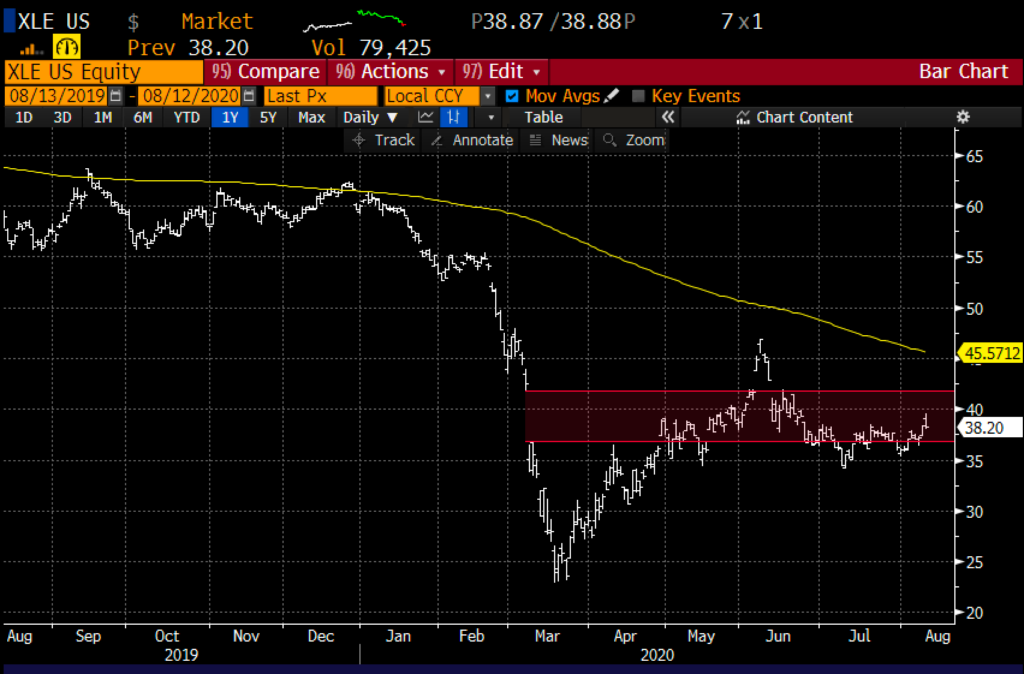 Industrial stocks measured by the XLI, the S&P Industrial Select etf have demonstrated the best relative strength to the broad market since the lows, despite being down 9% from its 2020 highs, it is up 61% from its March lows, besting the S&P 500’s return from its lows: 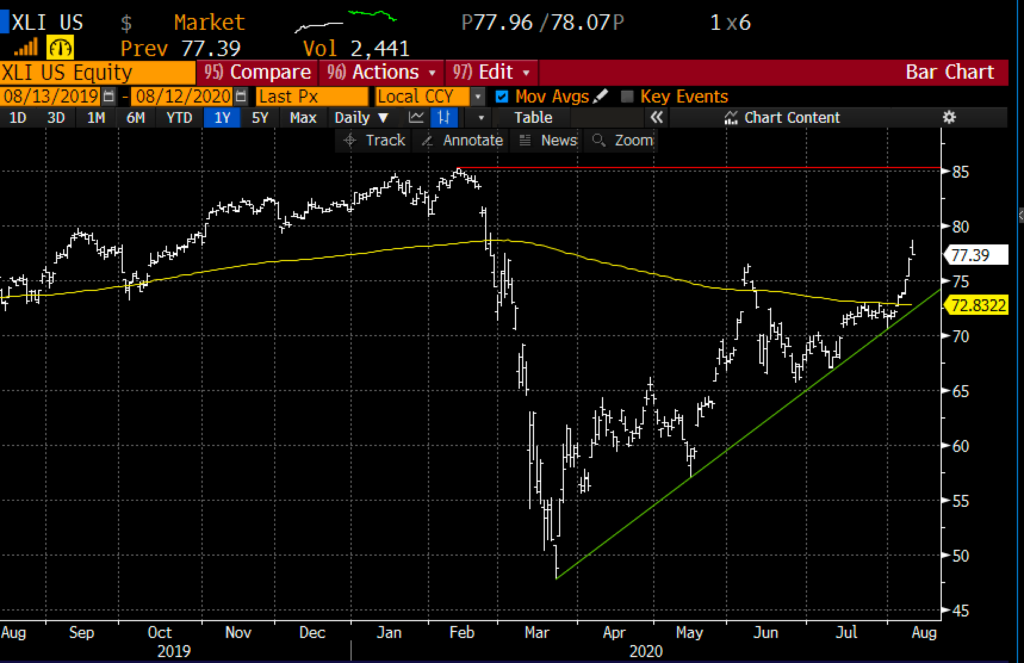 On the “pandemic winners” side, it is worth noting that there have been some bad technical breaks of uptrends in the last week with some important market leaders threatening as of yesterday’s close.

As of yesterday’s close Netflix (NFLX) was down nearly 19% from its blow-off top last month, Monday breaking decidedly below its uptrend but still 17% above its 200-day moving average: 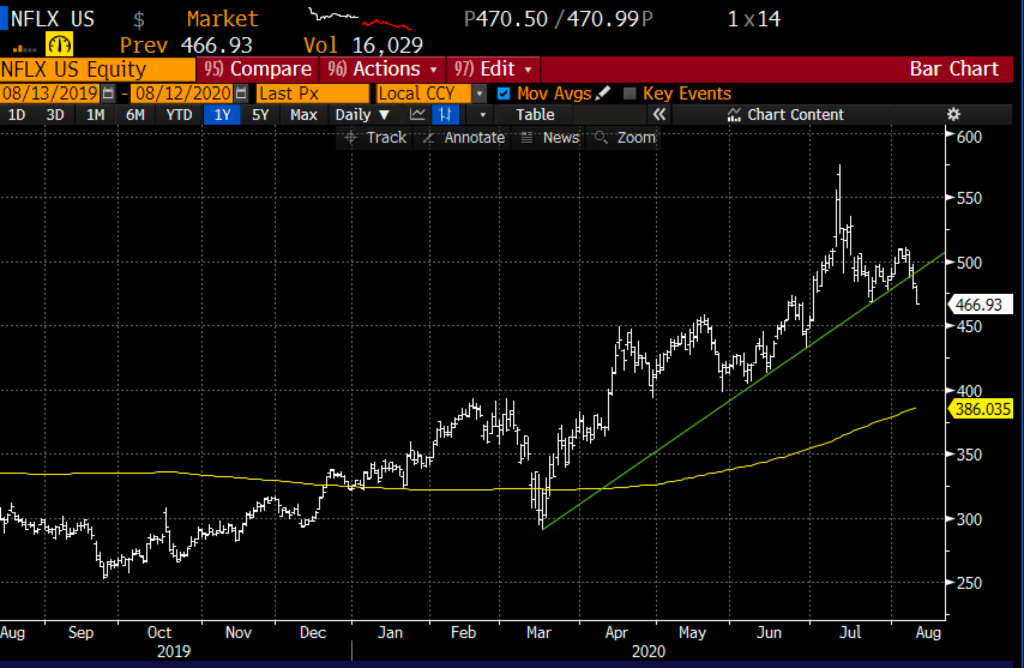 Microsoft made a brief new high last week but failed, making what appears to be a near-term double top, but also failing at the uptrend from its March lows that served as prior support but now technical resistance: 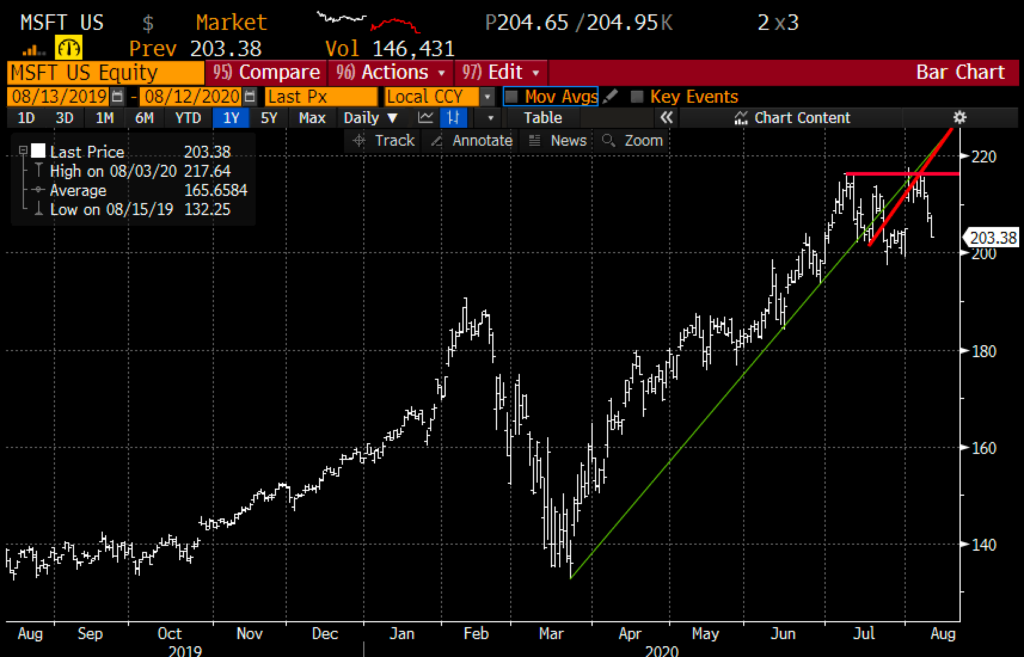 Amazon (AMZN) is the one to watch in my opinion, yesterday closing just above its steep uptrend from its March lows, down about 7% from its blow-off top last month and up nearly 70% on the year. AMZN is 40% above its 200-day moving average just to highlight just how Euphoric sentiment is in the stock: 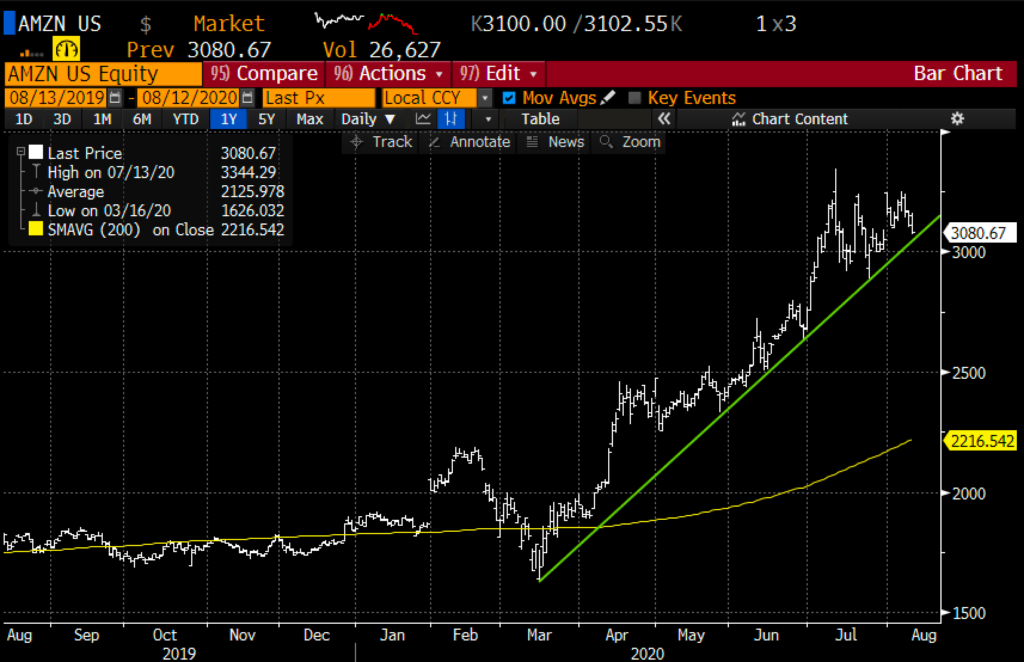 I was gonna add that Tesla (TSLA) is down about 22% from its blow-off top in July, and approaching near-term support with the next real support level own another 10% near its uptrend from its March lows, but the company this morning announced a 5 for1 stock split and the stock for some reason is trading up 6% on that one piece of news. 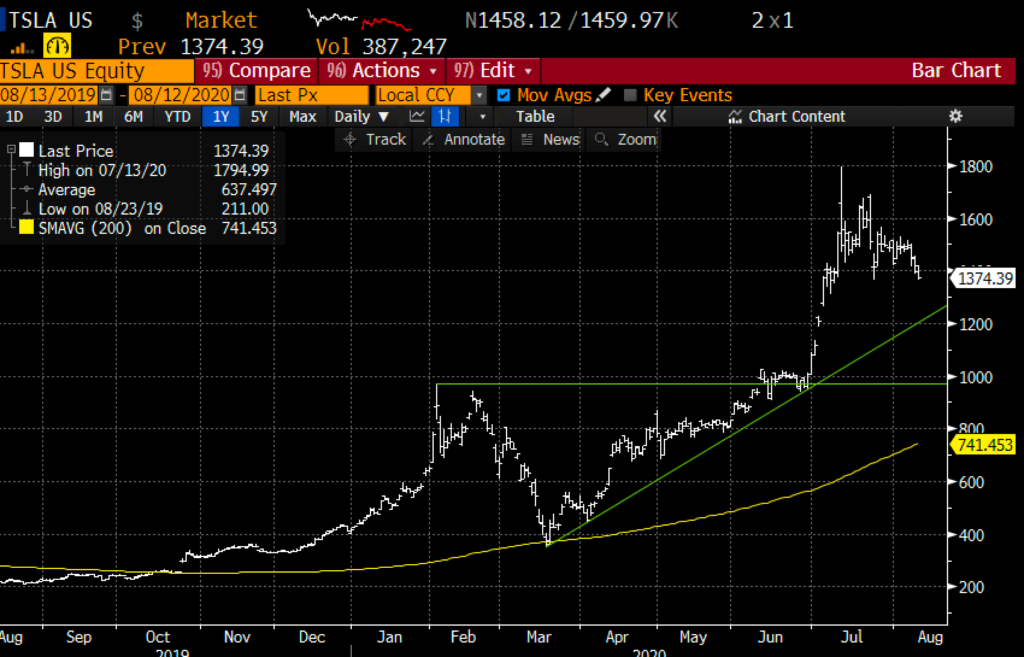 The last point I would make about this is that Tom’s epicenter stocks are cheap for a reason, investors fear a longer than expected economic recovery and would rather pay up for the growth companies that despite pulling forward demand will have established their dominance of what is certainly be a changed economy in a post-pandemic world. I can’t argue with the bits over atoms trade, but I also think that a correction in both price and time of some of these “winners’ is nothing short of healthy in the near-term as visibility on the health and economic crisis unfolds in the back half of this year.