Here are the implied one-day moves for each, first the atm straddle price, % move, and expected market cap move:

These four stocks make up 35% of the weight of the Nasdaq 100 (NDX). The QQQ, the etf that tracks the NDX is at a precarious technical spot, just below the uptrend from the March lows. 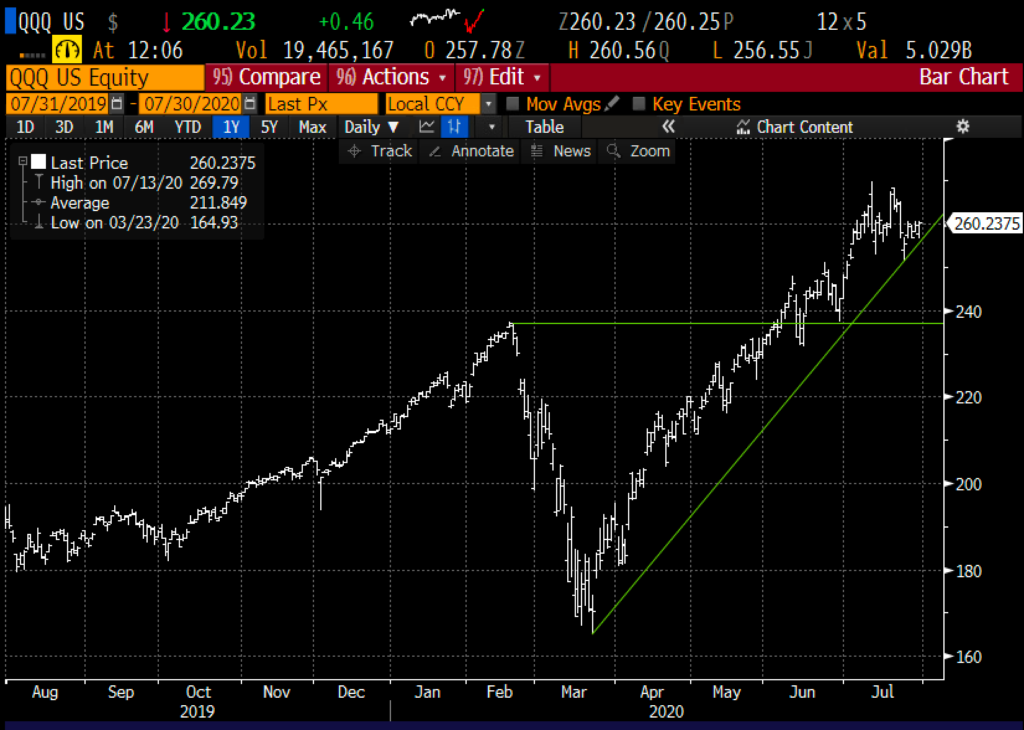 On a couple of occasions in the last couple of weeks, I have detailed bearish/hedging strategies using the QQQ, read here and here.

It is worth noting that the implied moves have come in nearly 1% point for each name. With the QQQ at $258, Aug 260 at the money put would cost about $8.25 or about 3% of the etf price which seems fairly reasonable if you are looking to protect a basked of these stocks that have performed very well ytd. Or you are looking to make an outright bearish bet that the lack of clarity on an extending coronavirus aid, political discord (trump calling to delay election today), slowing of economic recovery, and extended valuations in this very concentrated group of stocks could spark a correction in August. I would also add that Tim Cook, Sundar Pichai, Mark Zuckerberg and Jeff Bezos’s appearance yesterday in front of congress might give them all a little pause to offer to bullish of guidance for the current quarter and the rest of the year giving this notion that they are the perceived “winners of the pandemic”.

Here is my Quick Take on all four into the print.

Apple (AAPL), it is really about guidance as expectations still hold for a late Q3 or early Q4 launch of a 5G iPhone at a time where units have not grown for years and investors are hoping for an upgrade supercycle to justify the stock’s multiple (30x this year and 25x next), that is not solely predicated on better margin mix with services which only grew 17% yoy last quarter. Services growth is very tied to the growth of iPhone units and the trade up to 5G where users will be able to enjoy richer app experiences. I am not optimistic that we will see a meaningful 5G launch for AAPL in 2020. Expectations are for an 8% yoy eps decline and a 4% yoy sales decline in the current quarter (the one they will guide too) this could be high imo.

If the stock rallies it faces significant technical resistance at prior support (the uptrend from the March lows) which also corresponds with the recent all-time highs near $400. The stock has massive support at its June breakout near $330: 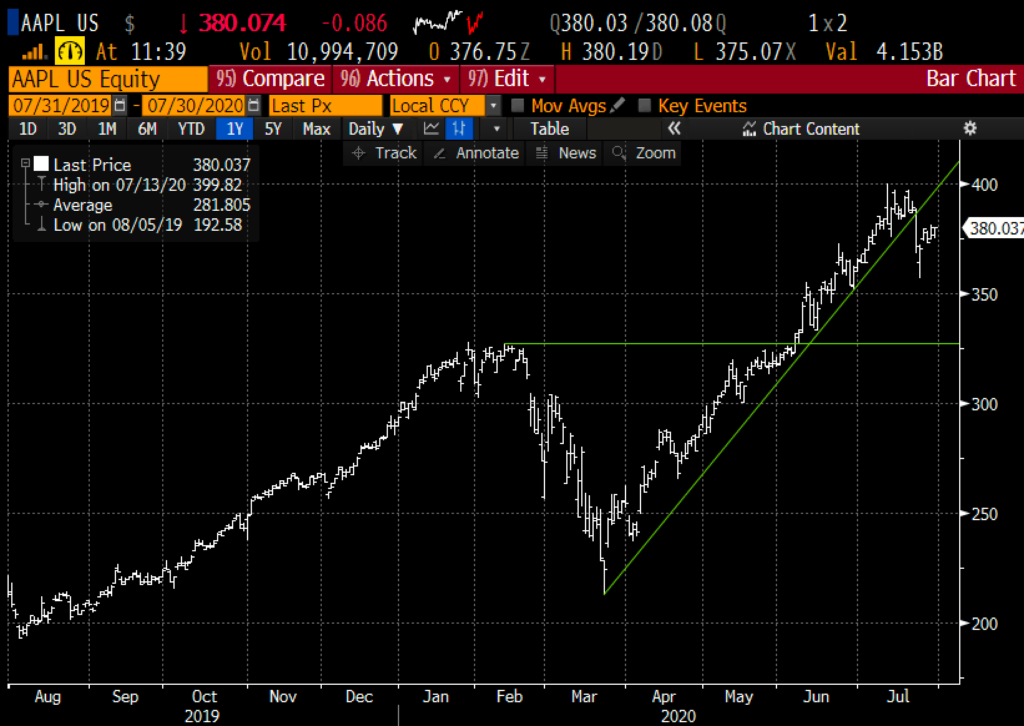 Amazon (AMZN) for you all that think I am just a hater on AMZN, I am not, I tweeted this when AMZN was near its lows in late March and at $2000 in early April: 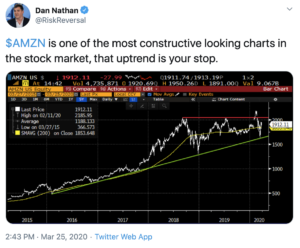 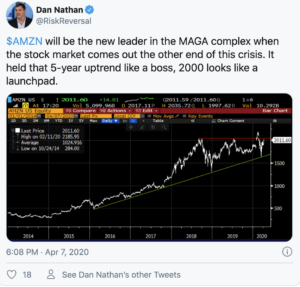 The stock’s relative strength was telling us a lot about the pandemic economy and the acceleration of trends that would come to be the dominant theme in the market since.

I think it is important though to go back and listen to what Bezos said about costs associated with “winning the pandemic”. On their last call they disappointing on operating income and guided for it to remain weak, the stock sold off 7% the next day but then was off to the races.

AMZN is off 10% from its blow-off top earlier in the month, but important holding that steep uptrend, if it can hold on good results then we see new highs soon enough, but a whisper of disappointment and this stock is on its way back to $2500: 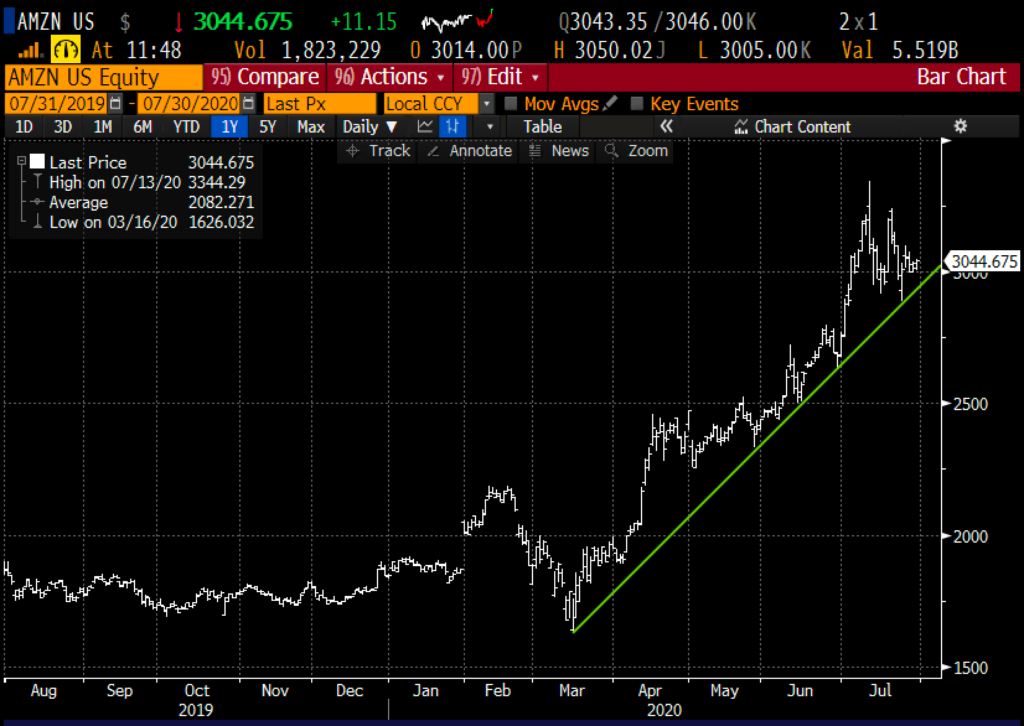 Alphabet (GOOGL) probably has the lowest expectations in this group of trillion market caps, but it might also be the most susceptible to a sharp revenue decline given its exposure to advertising budgets in the current weak economic environment. trading at 27x expected 2021 earings the valuation is next exactly cheap and given regulatory headwinds in Europe and next year in the U.S. investors might start to rerate this stock applying a slight discount as the distraction of regulation and the inability to do things deemed to be anti-competitive increase. The stock is the least extended of the group, and a beat and raise and it is easily up in line with the implied move making new highs: 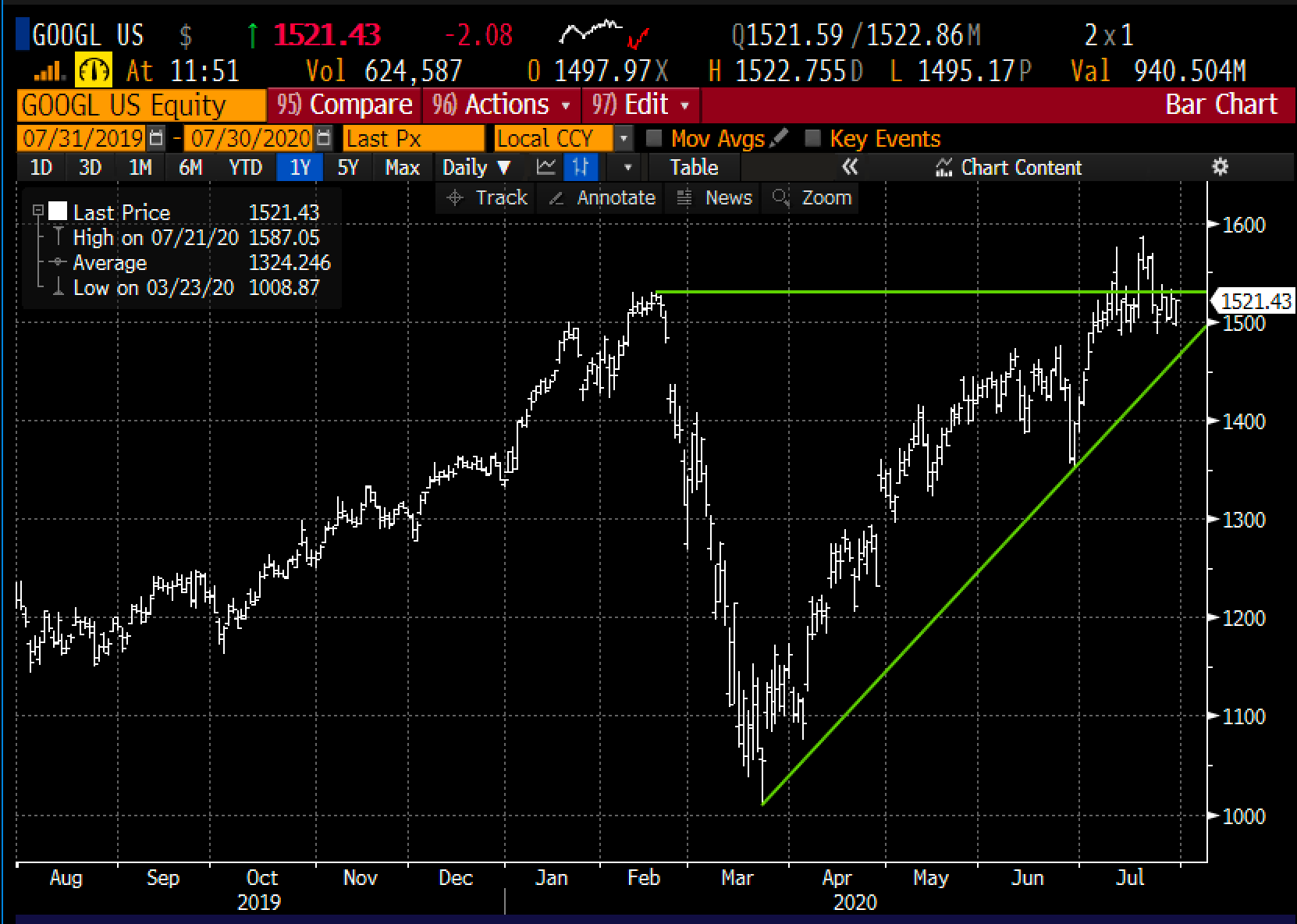 Facebook (FB) has the most risk to me in the coming months as we get closer to the election. The ad ban this past month from major brand advertisers will be the tip of the iceberg if they are complicit again in the hacking of our election. It is important to note that brands boycotted for social issues, and I think it is safe to say that interference in our democracy by foreign adversaries and FB’s inability to protect its users from misinformation will be the thing that would finally cause users to leave the platform. I am not a fan of this company, its products, its mission or its management’s handling of really anything in the last year. But until small businesses and users disengage the company is a money-printing machine. For the last two months, since the boycott became a thing the stock has consolidated above the prior highs with good support near $220, but like the others, the stock is holding on for dear life at its uptrend from the March lows. 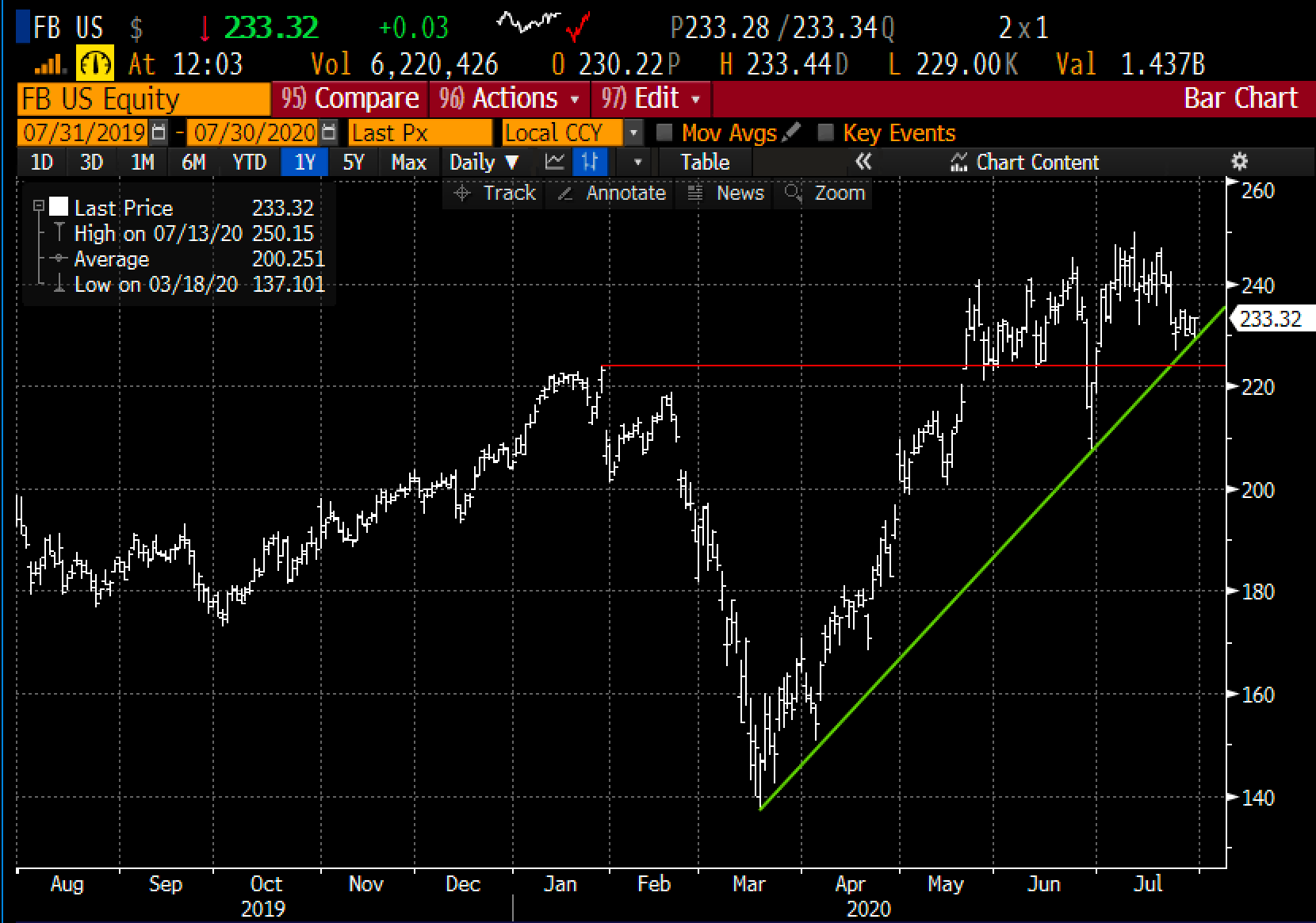 So in sum, investors don’t care about the regulatory threats, they feel ok with valuations being stretched and they think they will be the continued winners in a prolonged and post-pandemic economy. It is a winner’s take all world and these stocks (and MSFT) are the anointed ones. At some point, sentiment needs to reset. QQQ is the easiest way to hedge and to express a contrarian bearish view. Sell-offs will be bought at support as they will be perceived as one-off quarters in an economic environment that lacks visibility.