Today after the close INTC will report their Q2 results. The options market is implying about a 5.7% one day move tomorrow. With the stock around $61.50, the July 24th 61.50 straddle (the call premium + the put premium) is offered at $2.90 or 4.7% of the stock price. If you bought that, and thus the implied move for earnings, then you would need a rally above $64.40, or a decline below $58.60 to make money. The stock has moved above 4.4% on average over the last four quarters, but two of those moves were 8% rallies, so it has moved and it has not moved the day following earnings.

Year to date INTC has massively underperformed the SMH, the etf that tracks the group, of which INTC makes up ~9%, with the stock only up 2.5%vs the SMH’s nearly 16% gains, very near an all-time high, while INTC is still 10% below its 52-week highs made in February: 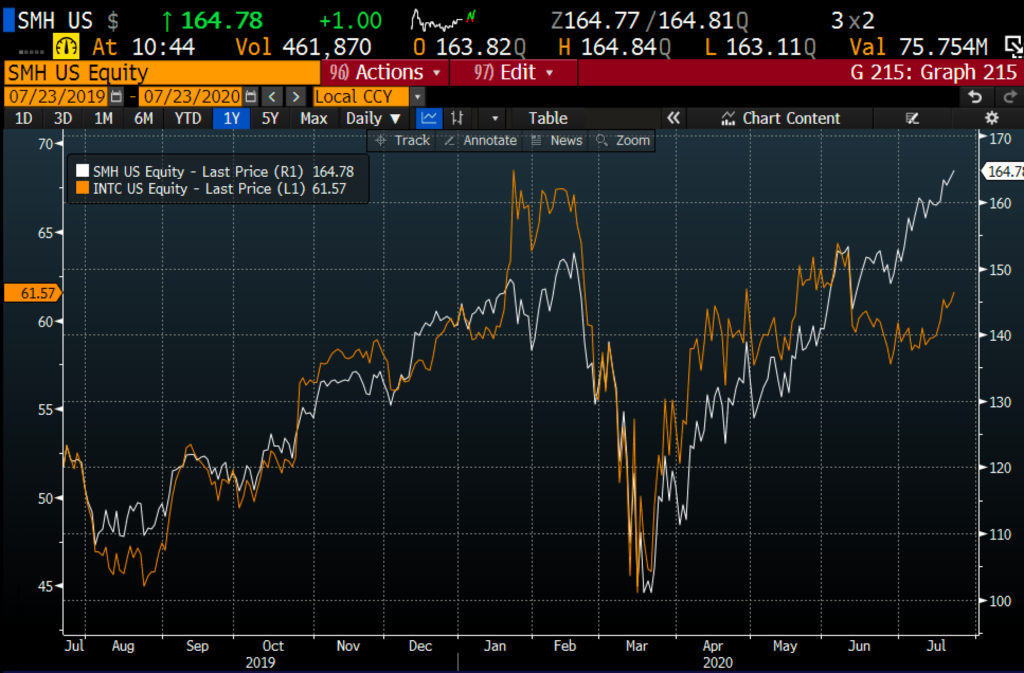 To my eye, INTC looks poised to move one way or the other in the coming days/weeks. A breakout above the downtrend and it is on its way back to the highs below $70. A breakdown below the uptrend from the down the March lows and the stock is back in the mid $50s: 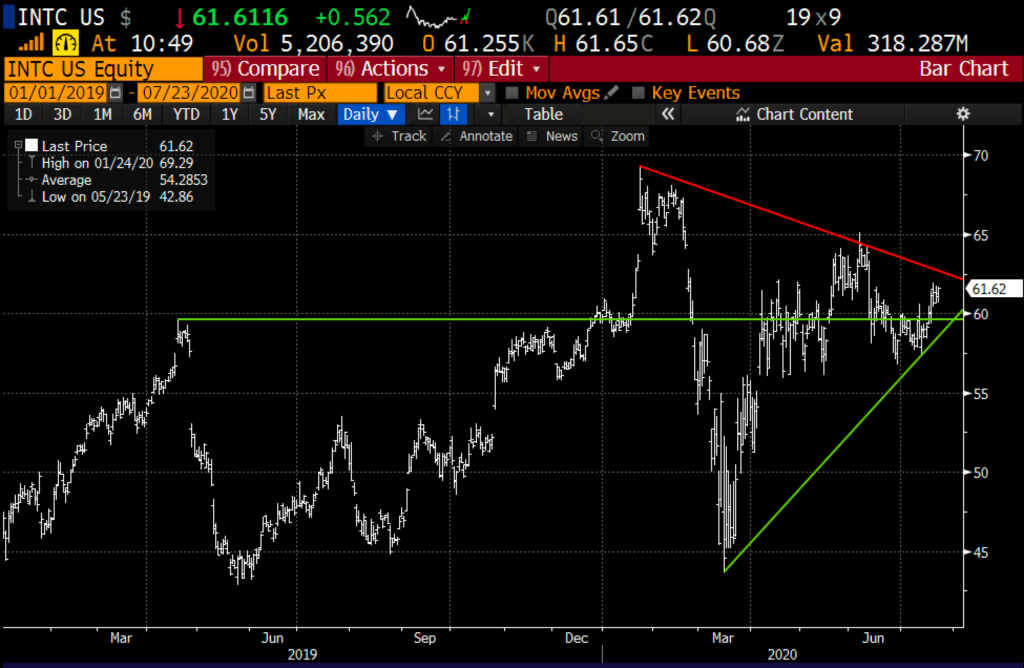 My friend Jared Weisfeld, Tech Specialist extraordinaire from Jeffries lays out the Set-Up into the print in a note this morning:

Semi reports have been positive and PC-data points continue to remain robust so INTC is a tricky one… while sentiment remains poor, expectations are fairly high into tonight. There are concerns on the sustainability of trends into the 2H but notebook ODMs had a robust June quarter with production up 71% sequentially (see below). While expectations are high, I continue to like the setup into INTC earnings, especially with the stock on 1 year lows vs. the SMH and the street modeling in a 6% sequential revenue decline into the June quarter. Cloud continues to remain robust as we climb the wall of worry with many supply chain players including Inventec and Wiwynn reporting robust results (although admittedly, MSFT commentary last night may change that narrative in the near-term).

So from a whisper/buyside perspective, investors want to see something closer to $19.5-$20BN for June quarter revenue vs. the street at $18.5BN (recall, INTC has been beating revenues by $1BN for the last few quarters.- see below) and investors would like to see something close to $18.5BN for the initial guide for the September quarter (vs. the street at $17.9BN). Even $18.5BN for September quarter revenues, which would be above the street, could be viewed conservatively as it would represent a 4% y/y revenue decline vs. June which will grow probably in the 20% range. It would also represent a sequential decline vs. 3-year seasonality of +12.5% (although recall, this year they won’t benefit as much seasonally from the iPhone launch as QCOM ramps their 5G solution).

What remains tricky is the post-print set-up and the #1 question I’ve been receiving is what can INTC say on the call tonight which would allow shares to sustain gains? The answer unfortunately is not much. There remain many concerns on share loss, competitiveness (or lack thereof) in parallel compute, process technology roadmap, architectural roadmap, and more. At a minimum, the Company needs to reiterate its 10nm timeline given mounting concerns as per SemiAccurate.

His take on what’s priced in is similar to mine, especially as expectations have grown in the last two weeks with the stock rallying 7% into the print. 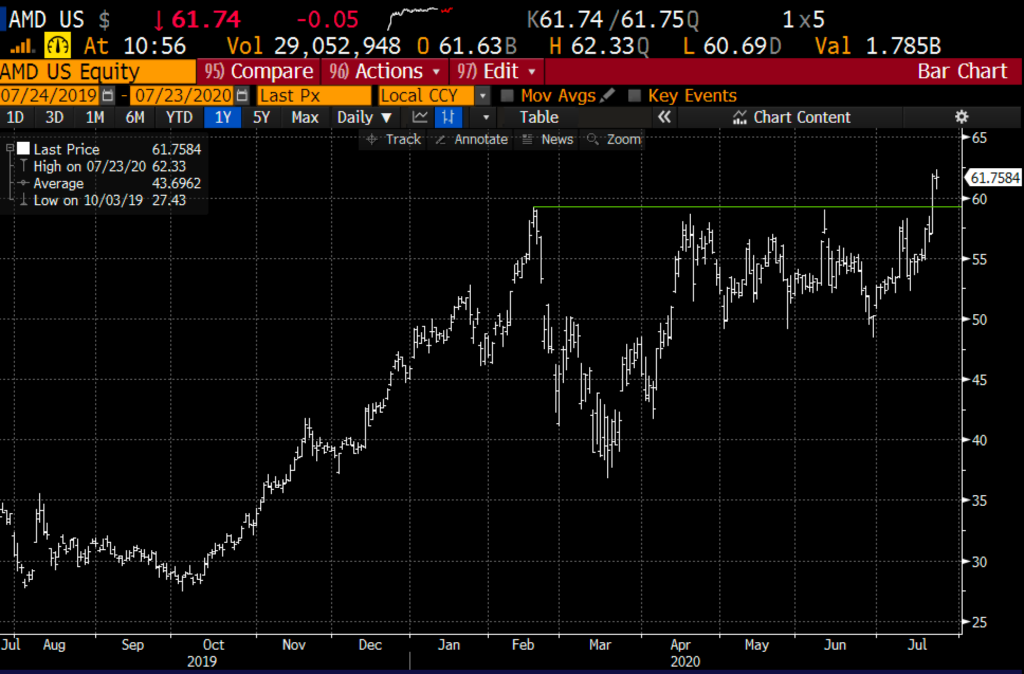 And Micron (MU) breaking out today above its downtrend from its February highs. 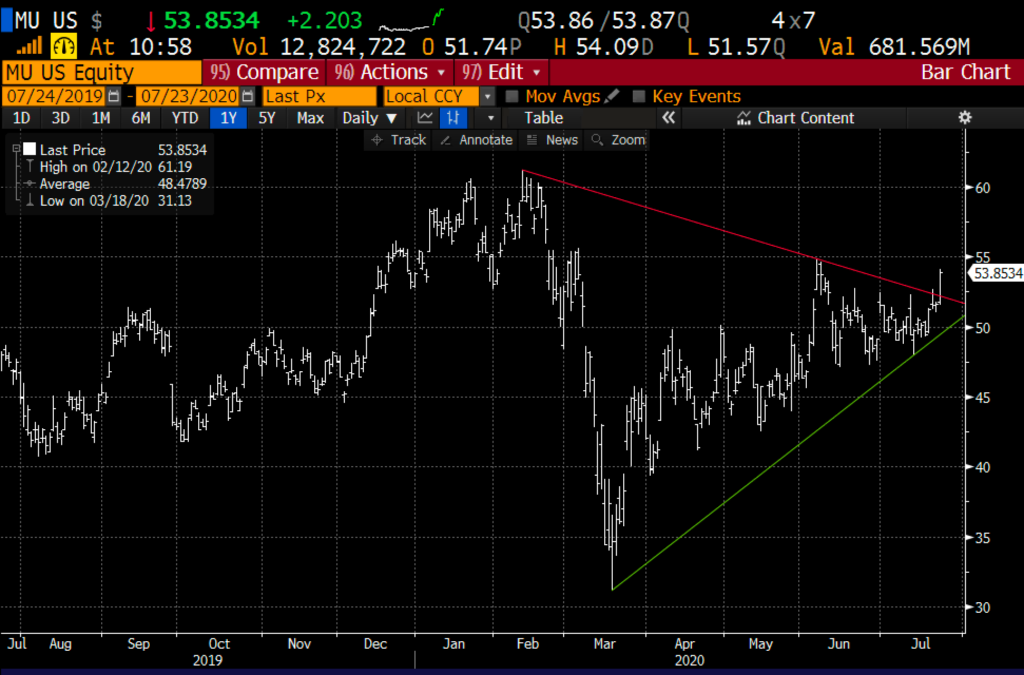 So what’s the trade?:

If I were inclined to play for a beat and raise and $70 I might consider the following call spread:

Rationale: this trade idea risks 2.5% of the stock price, breaks-even up 4% and offers a payout potential of 10% if the stock is up 14% in a month.

If I were inclined to play for a miss and guide lower I might consider the following put spread: