Snap Inc. (SNAP) will report its Q2 earnings tonight after the close. The options market is implying about a $3.50 move in either direction tomorrow, or about 14%, which is shy to the 19% average one-day post-earnings move over the last four quarters.

A quick reminder on how to figure weekly implied moves… With SNAP just below $25, take the July 24th weekly at the money straddle, in this case the 25 strike call offered at $1.65 and the 25 strike put offered at $1.85 and you add them together and divide by the strike price. So with the stock at $24.85, the July 24th 25 straddle is offered at $3.50, if you bought that (and thus the implied weekly movement) you would need a rally above $28.50 or a decline below $21.50 to make money by Friday’s close.

Shares of SNAP traded as low as $7.89 on March 18th in the throws of the coronavirus market crash, but have since risen more than 200%, placing the stock up 52% on the year, despite an expected adjusted net income loss of $263 million in 2020, greater than last year’s $225 million loss as sales are expected to increase 25% from last. In fact, Wall Street consensus is calling for GAAP net income losses until 2023: 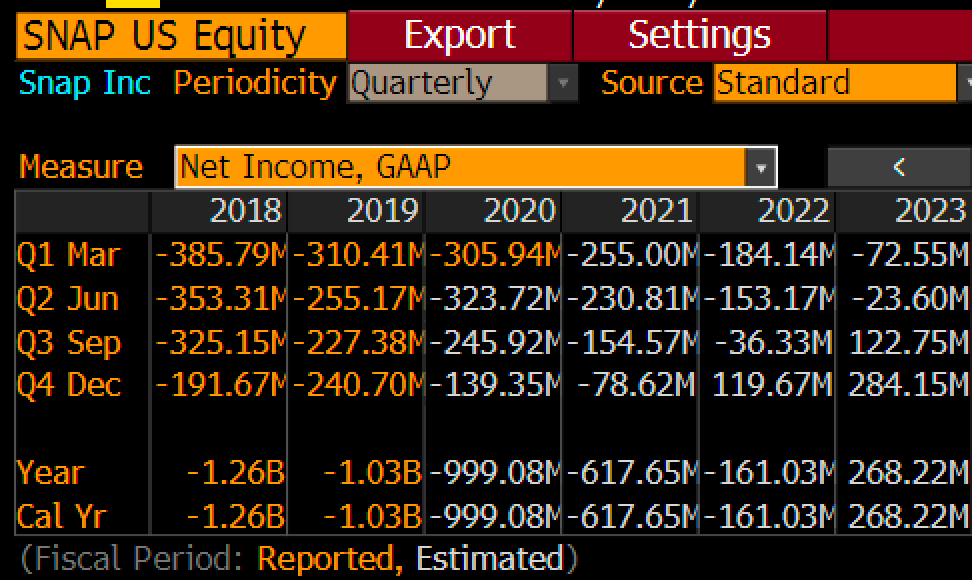 The 18-month chart below shows the steepness of the rally and support down near $21 which was the stock’s breakout to new 52-week highs in early June and also now its 200-day moving average: 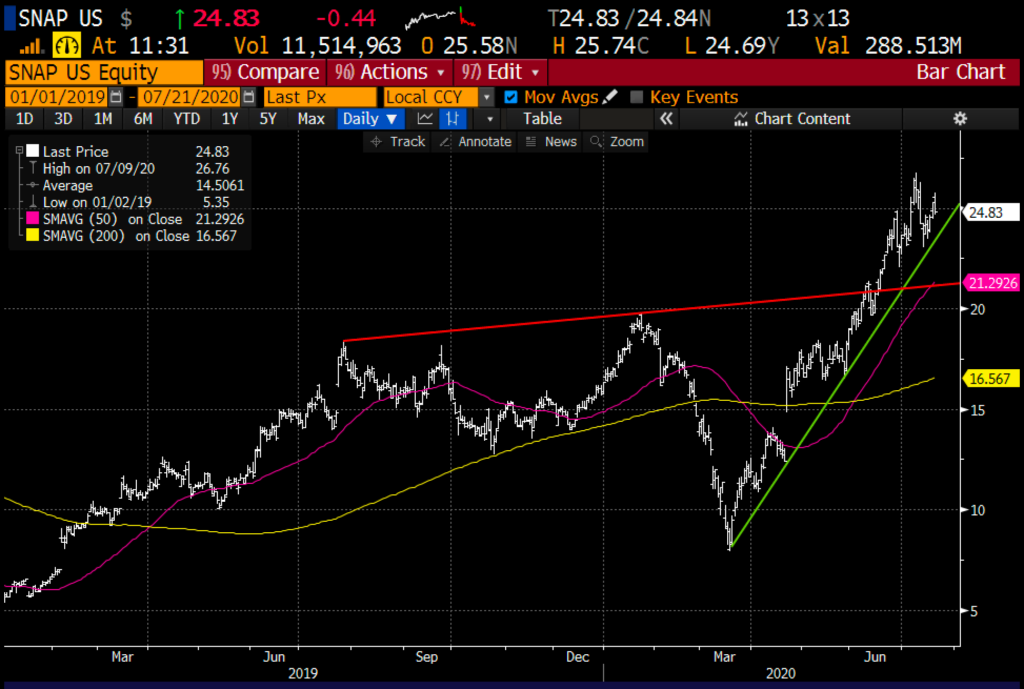 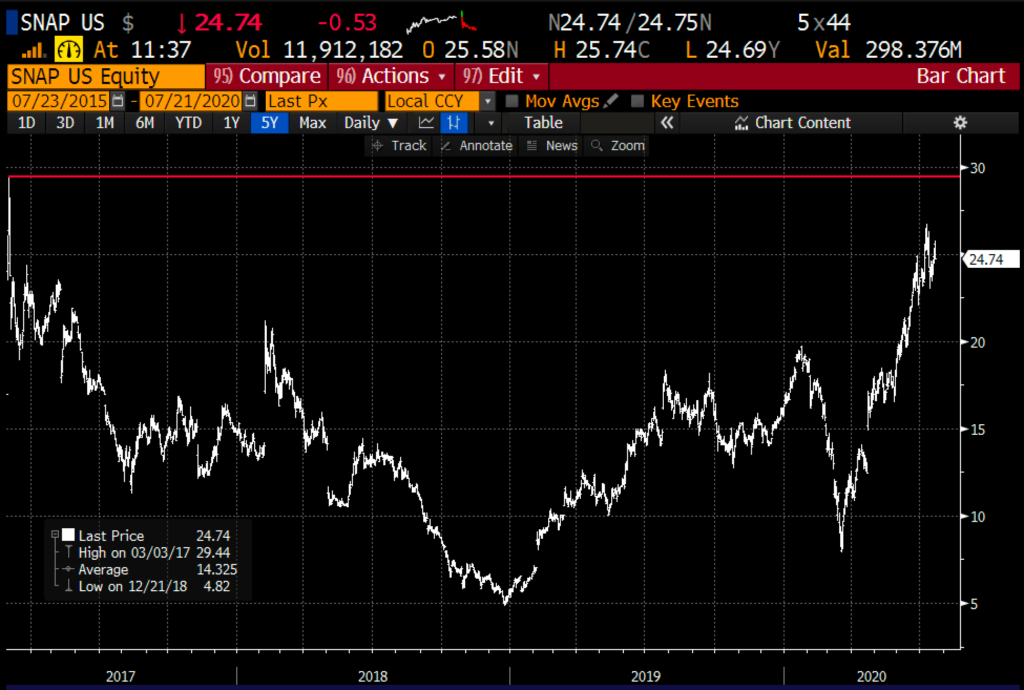 RBC Capital’s Internet analyst who rates SNAP a Buy with a 12-month $28 price target highlight the following to watch for in the quarter: 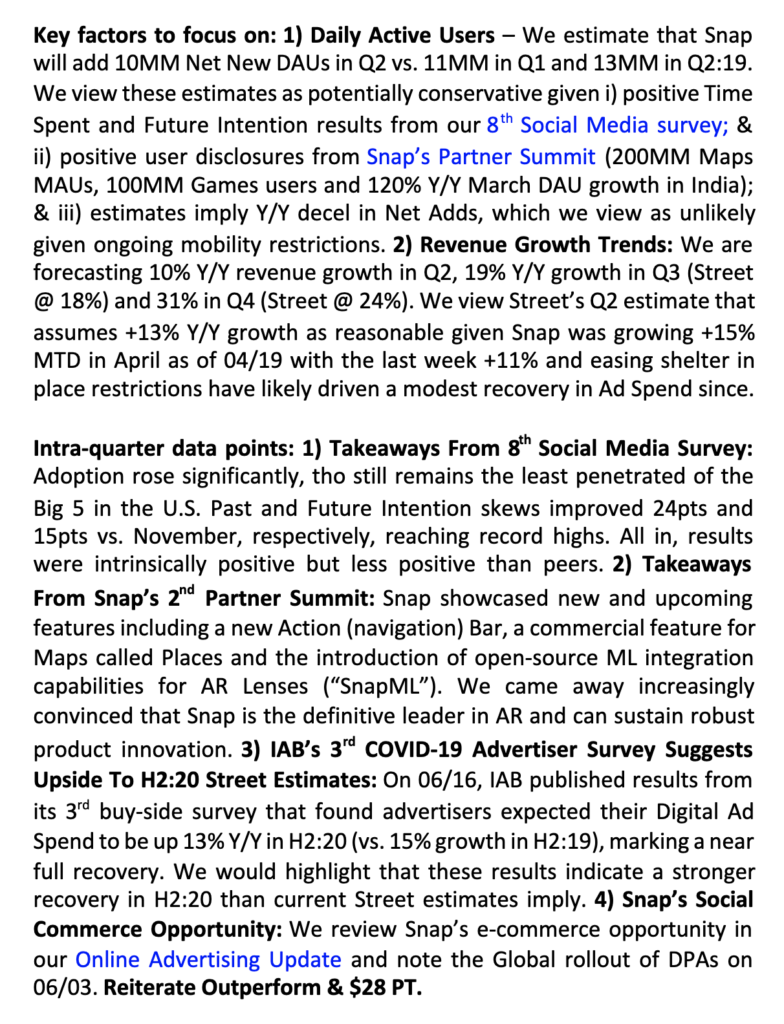 My Take into the print? expectations are clearly high as was the case in Netflix (NFLX) into its earnings last week. Investors at the moment don’t care about valuation, it’s merely a question of how much demand have they pulled forward (specifically in internet-based tech) and what sort of deceleration and ultimately churn will occur once we have a more normalized economy on the other side of the virus and stimulus.

Last quarter SNAP rallied 37% the day after earnings and has since rallied 100% on a quarter that was good, but I am not sure exceptional, that included no forward guidance, per Barron’s:

Snap posted revenue for the quarter of $462 million, up 44% from a year ago, well ahead of the Wall Street analyst consensus at $431.4 million, and right in the middle of the company’s guidance range of $450 million to $470 million. The company posted a loss for the quarter of 8 cents a share, not far off the Street consensus for a loss of 7 cents.

Snap said daily active users jumped 20%, or 39 million, to 229 million. That’s an acceleration from 17% growth in the fourth quarter.

I suppose better than expected DAU growth and lower than expected losses could easily cause the stock to make a move back toward’s its all-time highs below $30, but it would take a massive beat to get the stock to break out to new all-time highs. I could clearly see the stock consolidating some of its recent gains on a mild beat, but re-testing the breakout near $21 on a disappointment.

I AM HARD-PRESSED BASED ON WHAT I HAVE PERSONALLY OBSERVED BOTH IN MY HOUSEHOLD AND IN THE MEDIA THAT TIKTOK HAS NOT BITTEN INTO SNAP ENGAGEMENT. NOT to mention the social media ad ban by many large consumer companies.

If I were inclined to play for a re-test of prior highs I might consider a call spread in August expiration, for instance:

If I were inclined to play for a move back towards 20 on a breakdown below the steep uptrend and back towards its June breakout level I might consider the following put spread in August expiration:

Rationale: this trade idea risks 6% of the stock price, has a profit potential of up to nearly 14% if the stock is down 23% in a month.

If I were long the stock, don’t want to sell, considering a hedge, but don’t want to pay much for it, willing to give up some potential upside for defined risk to the downside then a collar would make sense, for instance:

Profits of the stock up to 30, called away above, but can always cover the short call to keep long intact prior to Aug expiration.

Losses down to 21 but protected below.