Divorced from the reality of the current economic and health situation in our country, this technical set-up and sentiment assume that there are few headwinds in the back half of this year. It is worth noting that on yesterday’s close, the S&P 500 (SPX) closed near flat on the year, a little less than 5% from its all-time highs. While the SPX has come a long way from the March lows, it has massively underperformed the Nasdaq Composite ytd, which until its reversal on Monday had been making new all-time highs what seems like on a daily basis for a month. To highlight the Nasdaq 100’s (NDX) outperformance, look at the spread between its 50-day and 200-day moving average, some 11% above the 200day, while the 200day is 20% below the current price: 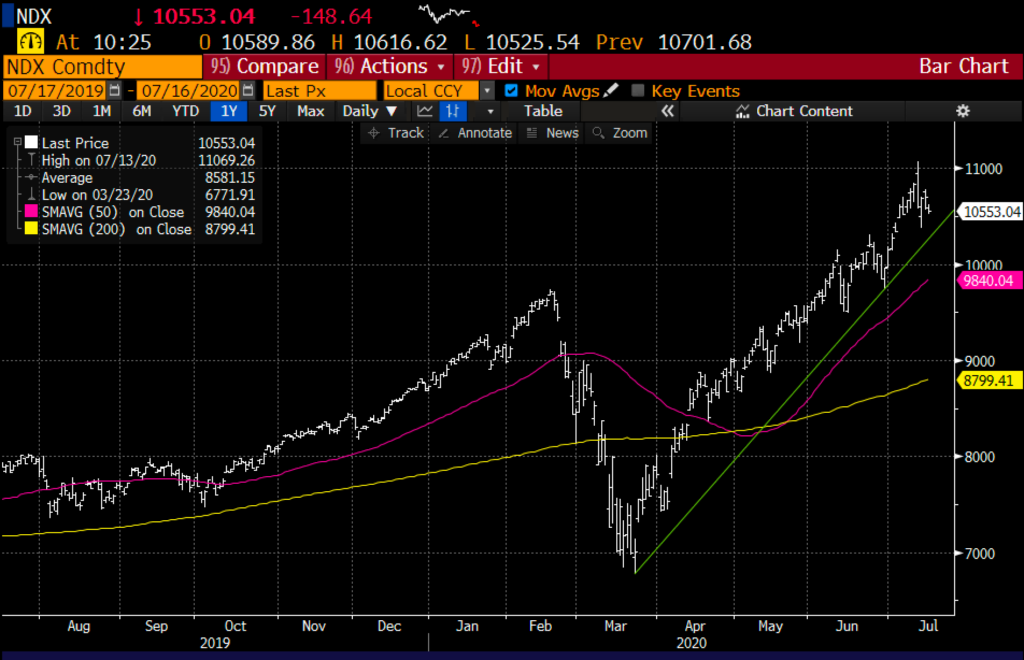 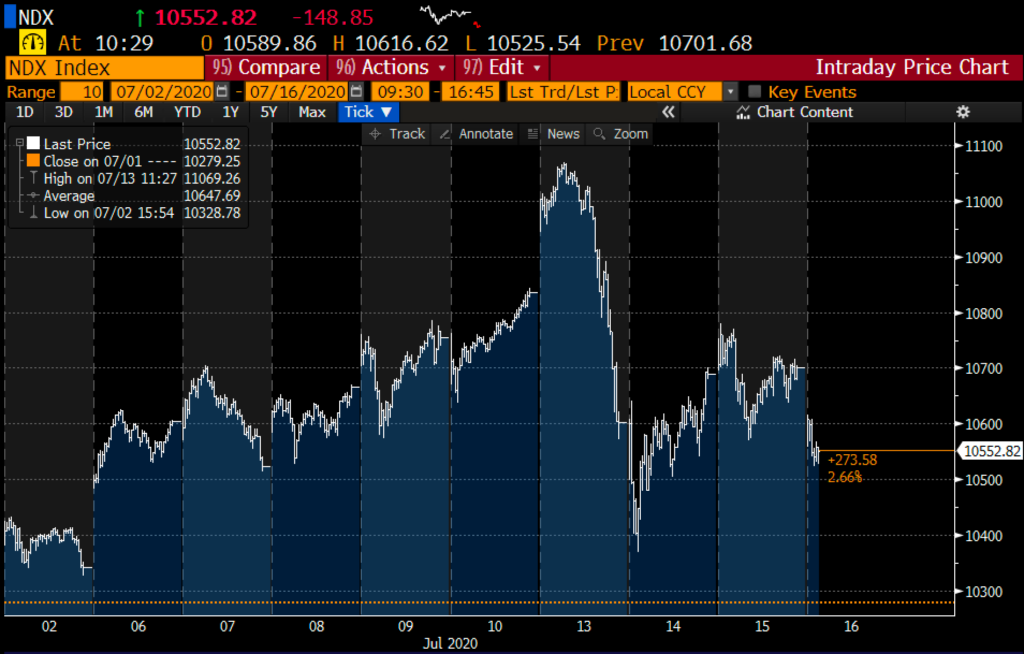 The frequency in which this has happened? the @sentimenttrader answered this question Monday on Twitter:

The Nasdaq 100 rallied more than 2% intraday to set an all-time high, then reversed to close down by more than 1%.

It’s done that twice. Today was one.

There are really only two stocks in the Nasdaq that really matter from where I sit, AMZN, and TSLA, both are very different but very similar in many ways. Without going into a full-on bull-bear debate on each and compatibly lets just say that they both exude irrational investor exuberance and have way overshot even the most staunch bulls near-term expectations.

AMZN is quickly approaching the uptrend from the March lows which represents key n-t technical support, below that you have the 2500 breakout level from early June: 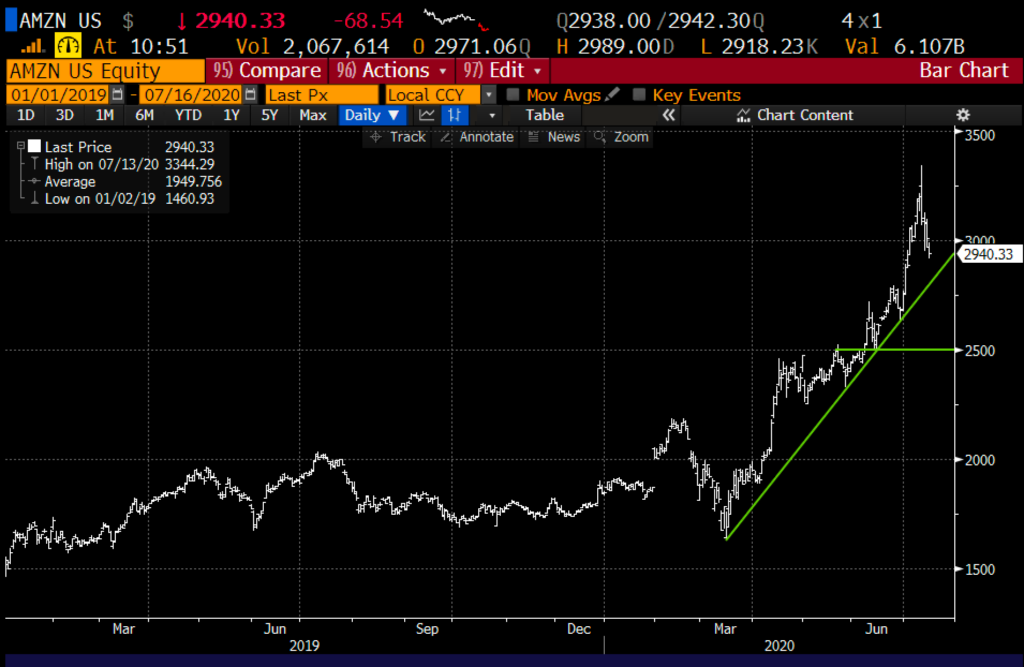 and TSLA which was up more than 70% this month alone is now consolidating after Monday’s sharp reversal with no real support until $1030: 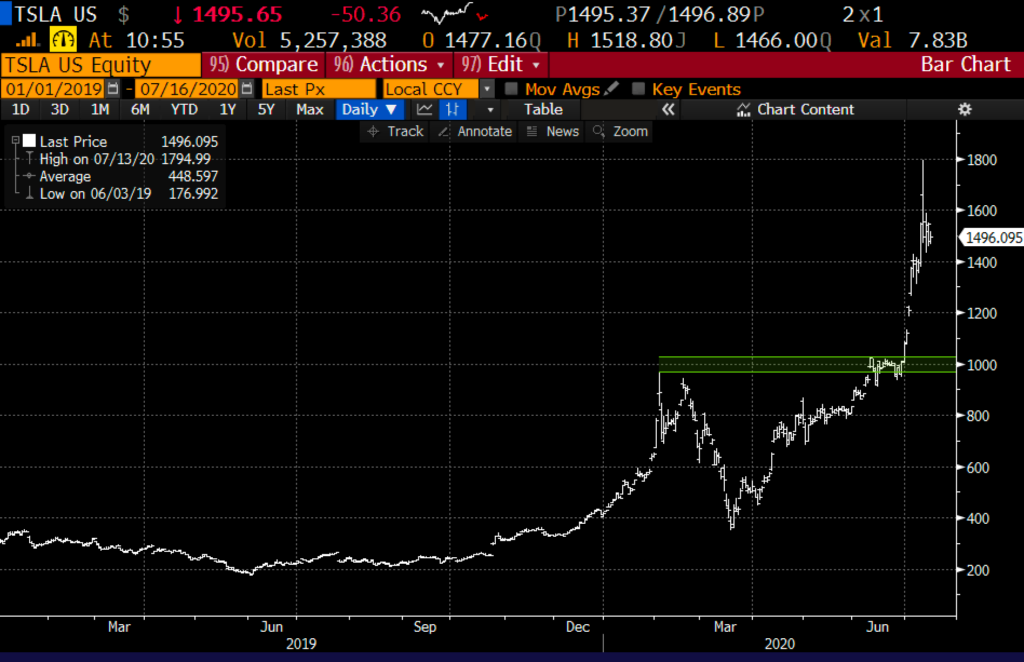 The fever has broken, and NFLX’s response to what are now high expectations to tonight’s earnings will be an important tell for the Nasdaq 100. My near-term downside target for the QQQ is the early June breakout level near $240 but if things were really to start to snowball the low end of the support range back to the Feb gap near $220 seems possible: 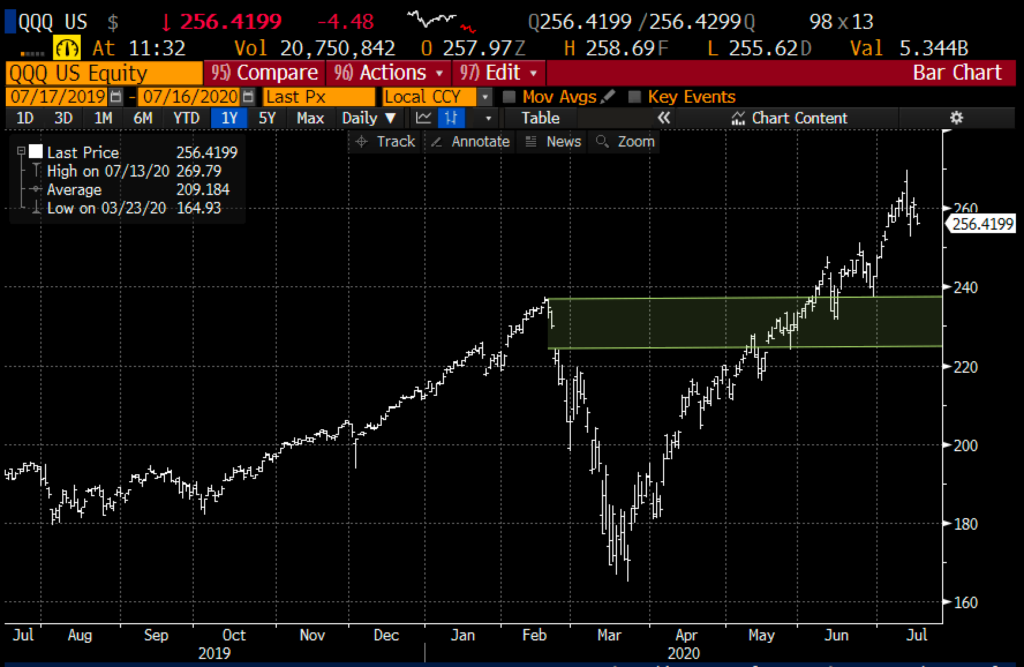 If I were inclined to play for a short term move back towards $240 as a directional trade idea I might consider the following put spread in Aug expiration:

OR for those looking for a hedge against stocks they own in the Nasdaq 100, specifically, the leadership, consider a wider put spread in September 30th quarterly expiration: