To state the obvious the pandemic has had a disproportionately negative effect on industries in the hospitality and travel industry. None harder hit than cruise lines, as they in some situations were the focal point of the coronavirus’s spread in February and March and evidence of just how quickly it can spread in confined areas. Cruise’s are not my bag, I will hopefully live a very long life and never travel on one. But more than half a million people globally sailed on more than 300 ships last year, so I am to assume that group was not traumatized like me as a kid watching the The Poseidon Adventure on HBO over and over again. Well, Cruises are not sailing and likely won’t until there is a vaccine for the virus. The stocks in this group are some of the hardest hit with Carnival (CCL) and Royal Caribbean (CCL) down 70% and 65% respectively on the year, despite their 90% and 150% gains respectively off of their recent lows made in March and April. Both companies are expecting 70% sales declines year over year and earnings have swung to massive losses, and both have been forced to improve their liquidity position as cash burn has become an existential threat for both as there is little to no visibility on when business will come back.

But like all things related to this virus and the stock market, certain outcomes might be binary, and the investors are likely to run ahead of actual news of the ships setting back out to see. The flip-side is that the companies continue to burn cash, continue to dilute existing shareholders by taking bailouts, and the equity of both could head much lower.

Looking at CCL it is clear that the stock has been volatile the last few months since the initial crash. The stock is now below the uptrend from the April lows, and down 40% from its early June highs: 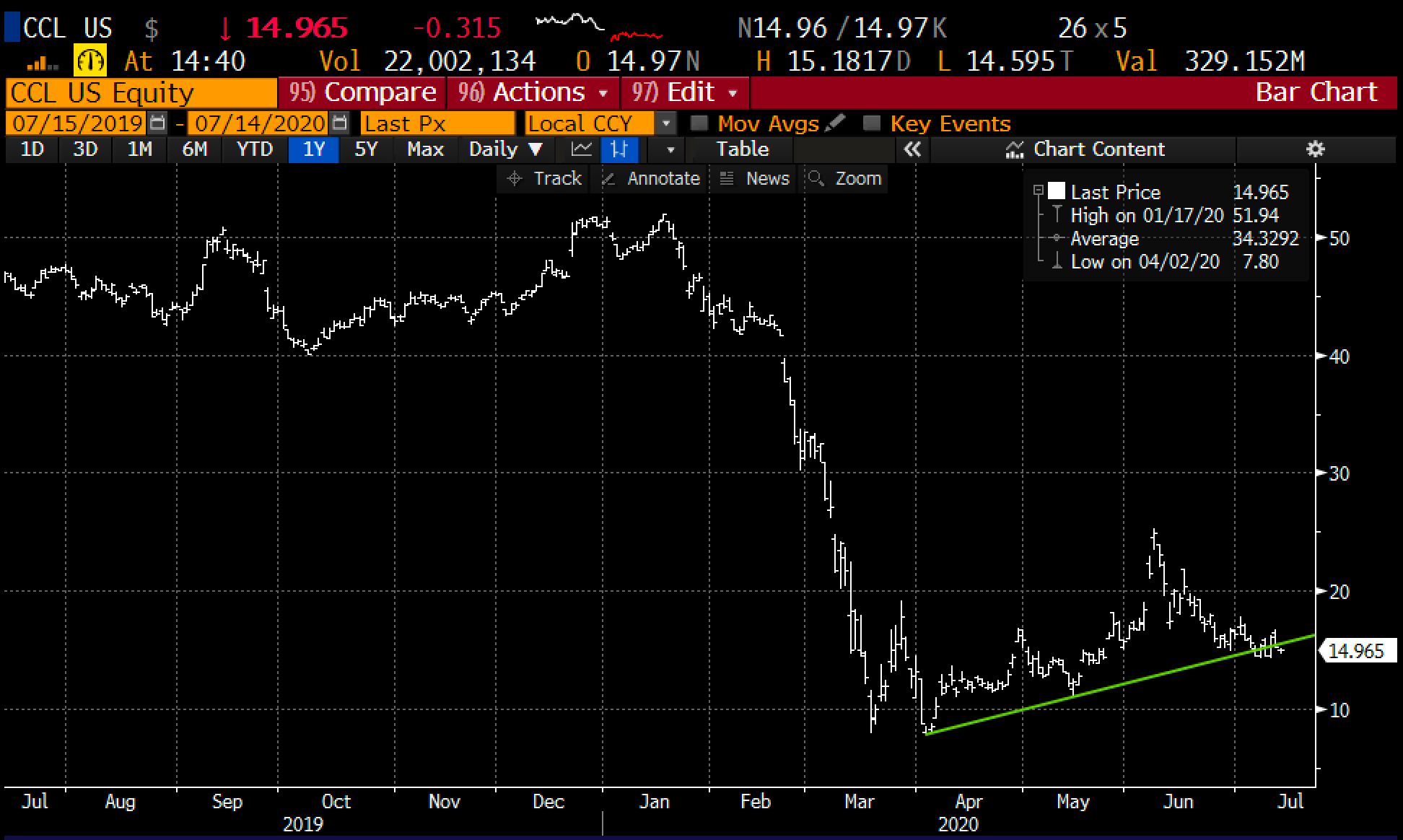 The stock has nearly 26% short interest and will be prone to bouts of squeezes as the news flow gets more positive regarding the virus but those rallies are likely to come when sentiment is downright horrible, which it doesn’t appear to be just yet,

Short-dated options prices reflect this uncertainty wth 30-day at the money implied volatility at 100%, with the $15 straddle in August (the call premium + the put premium) implying about a 25% move in either direction over the next month:

On Fast Money the other night I got a question from a viewer about his desire to own the group for the long-term as he feels confident eventually that they will be back. It is hard to disagree with that, it is just a matter of what these balance sheets look like when they do come back, CCL has a market cap of $10.9 billion, $6.8 billion in cash and $22.5 billion in debt. The issue is that they will need to raise more cash the longer they are burning it by either making dilutive equity sales or loading up with debt that will likely come with an equity kicker. I am not optimistic about this group in the near term, I am not of the belief that a fast-tracked vaccine pushed by the trump admin will be a medicine that Americans are willing to take just so they can go on cruise ships, among other things.

But if you thought that sentiment is too poor on the space and on the virus, then looking out to Sept and playing for a short squeeze could make sense… with the stock near $15 the Sept 15 – 25 call spread is offered at $2, it breaks-even at $17, up 13% and has gains of up to $8 with a max gain of $8 if the stock is above $25 on Sept expiration, or up 66% very near its June high.

But if I thought the price action and technical set-up is horrid and there will be NO good news this summer, I might merely pay $1 fo the Aug 12.50 put, risking 6.6% of the stock price with a break-even down 23% targeting a move back towards the April lows round 8. Not a great risk-reward, but the next move this stock makes could easily be 25% plus, it is a matter of conviction.