On March 24th, the leader of the DayTraders in 2020, Dave Portnoy, CEO founder of sports blog, Barstools Sports hosted Jim Cramer of CNBC’s Mad Money. Dave told Jim that without sports and thus sports gambling he is gonna start gambling on stocks. He funded his account with $3 million which was likely some of the spoils of the sale of his 36% stake for $163 million in cash and stock to Penn National Gaming (PENN) in January which valued the company at $450 million. It is fairly remarkable timing that this session occurred at the very lows of the stock market, and launched a movement!

But this post is not about Davy DayTrader, its about PENN, which was one of the hardest-hit stocks that I can find from its highs in February to its lows in March, suffering a 90% peak to trough decline in less than a month, or about $4.5 billion of its prior $5 billion market cap. In my 23 years of staring at Bloomberg screens, I have never seen anything like it in a mid-cap stock or higher without fraud. 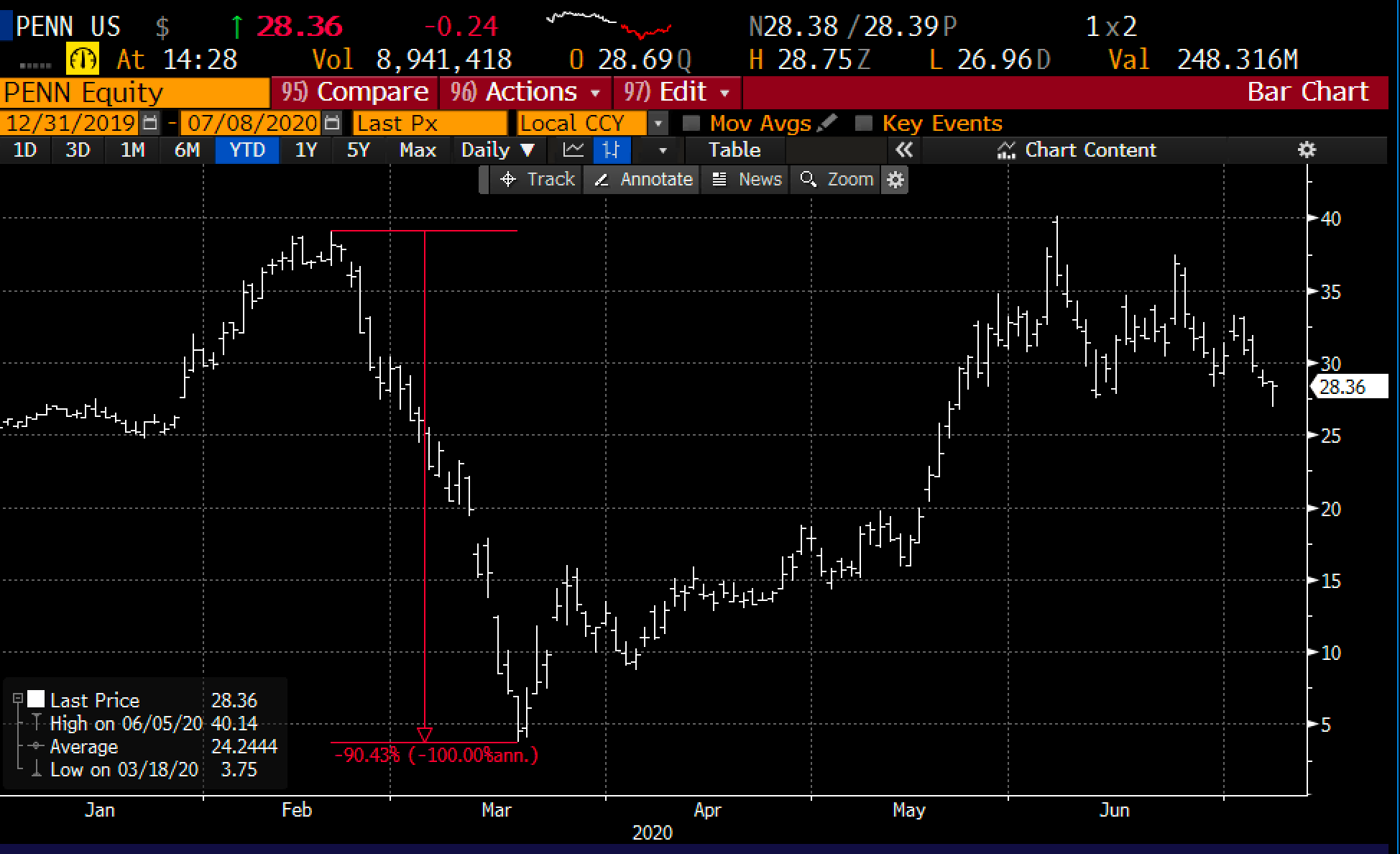 The stock rebounded nicely through April and May and the company raised $600 million, half in common stock at $18 and half through a convertible bond. With the stock now at $28, down from its intra-day, and new all-time high from early June at $40, the sale feels a tad premature. But, at its lows in March, sporting about a $500 million market cap, the company was being priced for bankruptcy vs its debt load of close to $12 billion as the company’s adjusted net income was expected to be a loss close to $1 billion in 2020 vs a $177 million gain in 2019 on a 42% expected yoy sales decline.

The rip in the stock following the capital raise from $20 to $40 came on the optimism that its 41 casino properties would all soon be reopening and that sports would be close to coming back online so the company could resume its sportsbook. With the NBA and MLB set to start at the end of the month, investors are keeping a close eye, not just for those levered to gambling, but how this might go for other businesses that rely on the sort of interpersonal engagement that sports does, and the prospect of activities needing to stop-down all-together if there is a covid breakout.

Just as it was the NBA’s suspension of their season on March 11 that made the likelihood of an economic lockdown real for most Americans, a failure to launch or shutdown some 5 months later might inflict the same damage on our collective psyches.

At the time of the company’s share sale the underwriters restricted insiders and board members from selling for 60 days (per Bloomberg), that restriction ends on July 11th, so next week it could be bombs away with the stock up 55% from the offering levels. This might provide Davy Day Trader an opportunity to raise more cash to stick back into his trains, plains, and autos trade.

If I were Davy Day Trader I might consider collaring a portion or all of my PENN stock, as he is likely to get more if PENN exercised their option to increase their stake in Barstool.

How might he do it? vs 100 shares long he would sell 1 out of the money call and use the proceeds to buy one out of the money put, locking in a potential profit range from current levels to the short call strike, but also allowing for losses down to the long put strike but offering protection below…for instance:

Profits of the stock up to $40

Losses of the stock down to $21, protected below

Rationale: one would place a hedge like this if they are more concerned with extreme downside between now and Jan expiration then they are extreme upside. But to be clear it is allowing for 40% upside between now and Jan expiration vs only 26% downside. Given the volatility we have seen int he stock ytd, the levered balance sheet, and the lack of visibility into their business, this sounds like it makes sense.

As for trades in PENN aside from a hedge, looking at the at the money straddle in August it is implying about a 30% move in either direction, which means that long premium trades in an attempt to express directional views are downright hard.