Shortly after the open today, I filmed my weekly In The Money segment with Fidelity Investments. Click below to watch: 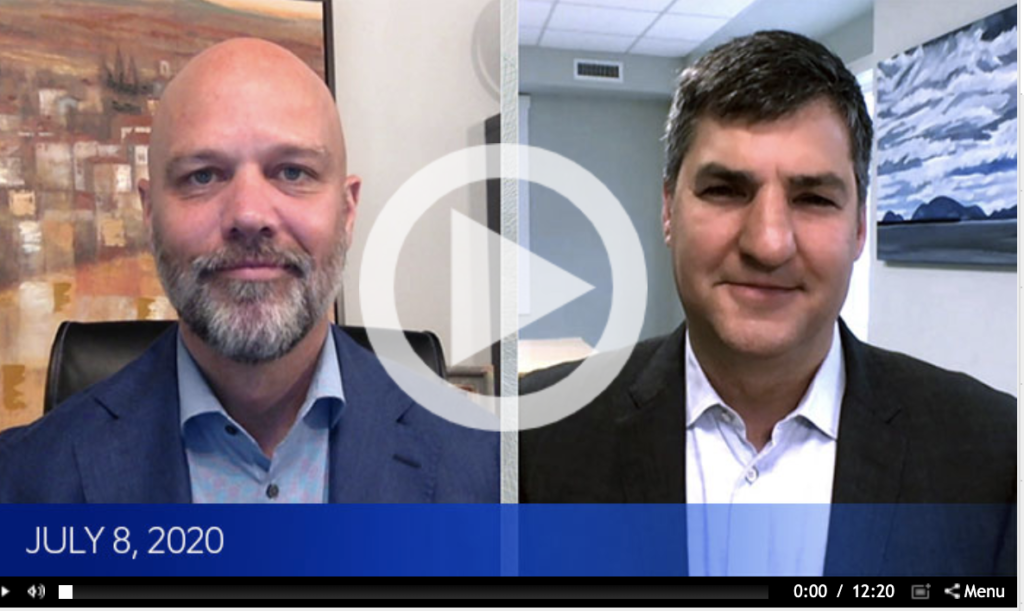 We first had a broad macro discussion about the spread of the virus, the pace of re-openings, expectations on therapies and vaccines, elevated unemployment and upcoming earnings. Here are my notes:

Macro: In the last two months we have seen the stock market rally after the May and June jobs reports that showed better than expected gains. But looking under the hood and keeping an eye on weekly jobless claims we see that workers who were previously furloughed from hard-hit groups like hospitality are coming back, but who knows for how long given the rocky economic reopening, and more than 30 million Americans are still on some form of unemployment assistance.

Next week Q2 earnings season gets kicked off with 3 banking giants reporting earnings on Tuesday before the open JPM, C & WFC, all implying at least 5% one-day post-earnings moves. To say these stocks trade horribly is an understatement down 34%, 37%, and 54% respectively. This group likely to give us the best sense of what bankruptcies and defaults look like in the back half of the year and investors will be keying on any commentary that hints to higher loan loss provisions in the months to come which could put pressure on dividend payouts. The chart below of the SPX vs JPM is just devastating. It has been my view for a couple of months that this divergence can not last, but I would place greater emphasis on how the bank stocks act vs how the liquidity-driven SPX is acting. 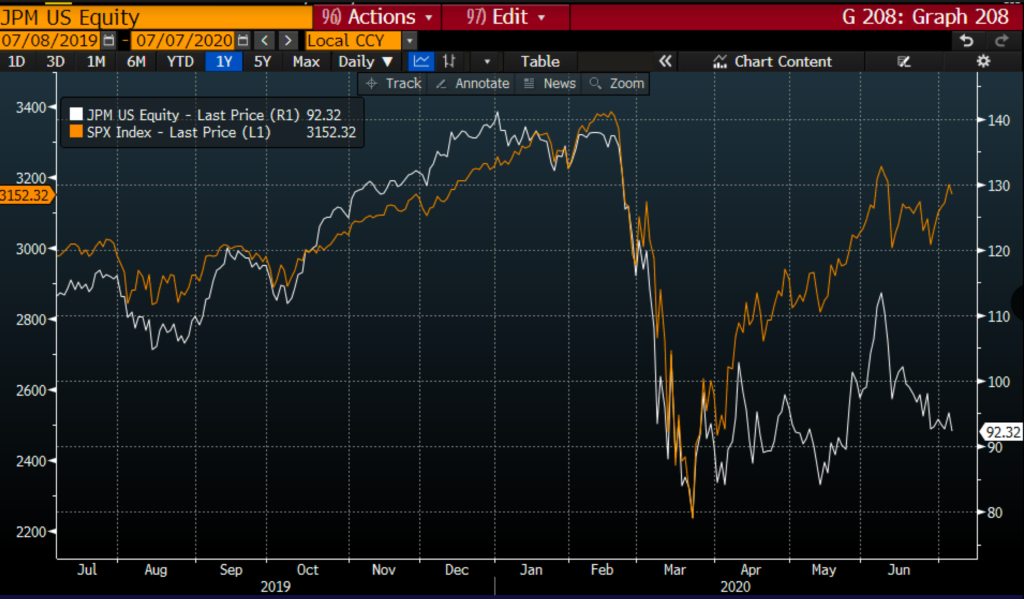 Trade Idea #1: Sell Consumer Discretionary Stocks into NO BACK SCHOOL, and back to work looking spotty at best. WIth expanded unemployment benefits running out soon, and the political rhetoric heating up into what is sure to be a nasty presidential election season, the further stimulus might be hard to come by putting pressure on consumer discretionary spending as we likely see unemployment settle in somewhere around 10% from the balance of the year.
Bearish Trade Idea: XLY ($131.50) Buy Aug 130 – 115 put spread for $3
-Buy to open 1 Aug 130 put for 4.10
-Sell to open 1 Aug 115 put at 1.10
Break-even on Aug expiration:
Profits of up to 12 between 127 and 115 with max gain of 12 below 115
Losses of up to 3 between 127 and 130 with max loss of 3 above 130
Rationale: This trade idea risks 2.3% of the stock price, has a break-even down about 3.5% with a max potential profit of 9% if the stock is down 12% on Aug expiration
The 1yr chart shows a triple top at the February and June highs, and support at the uptrend from the March lows:

Lookback: WMT Aug Call Spread.
On June 10th I detailed a bullish trade idea on WMT, playing for a re-test of the prior highs by Aug expiration:

I suspect it is not nearly as good as the headline reads and the unemployment rate will remain double digits for at least the second half of the year…
Retailers like WMT should continue to benefit, and consumer discretionary items like LULU who has seen its stock rip could consolidate some gains.
Trade Idea #1:
Bullish Trade Idea WMT ($121.50) Buy Aug 125 – 135 call spread for 2.50
-Buy to open 1 Aug 125 call for 3.40
-Sell to open 1 Aug 135 call at 90 cents