I have had a light week on Risk Reversal on this holiday-shortened week. I started Monday morning with The Set-Up with Guy Adami highlighting upcoming earnings from Micron (MU) and FedEx (FDX) which were both better than expected with slightly differing market reactions and of course this morning’s June Jobs data, which was also better than expected.

On Tuesday I tweeted the S&P 500 (SPX) chart which appeared to be at a near-term technical inflection point:

The Ol Jerry Maguire pattern for the SPX, Breakthrough?? or Breakdown?? pic.twitter.com/y00iSjFJON

Last night on CNBC’s Fast Money I explained why I thought the price action in the SPX relative to the new highs in the Nasdaq was less than encouraging:

might come as a surprise coming from me, but today was a terrible, horrible, no good very bad day for the S&P 500. Despite the Nasdaq all-time high (mania), banks & oil stocks trade as recession lasts longer than most think, Russell 2000 is a dog and transport’s reversal no bueno https://t.co/8aZtgHqOll

And waking up this morning to the S&P futures riping higher in front of this morning’s June Jobs data I posited:

On the heels of the better than expected June jobs report the S&P Futures are up 1.30%, just 50 bps higher than the pre-report levels, but clearly look like they want to re-test the high-end of the one-month range in the days to come. 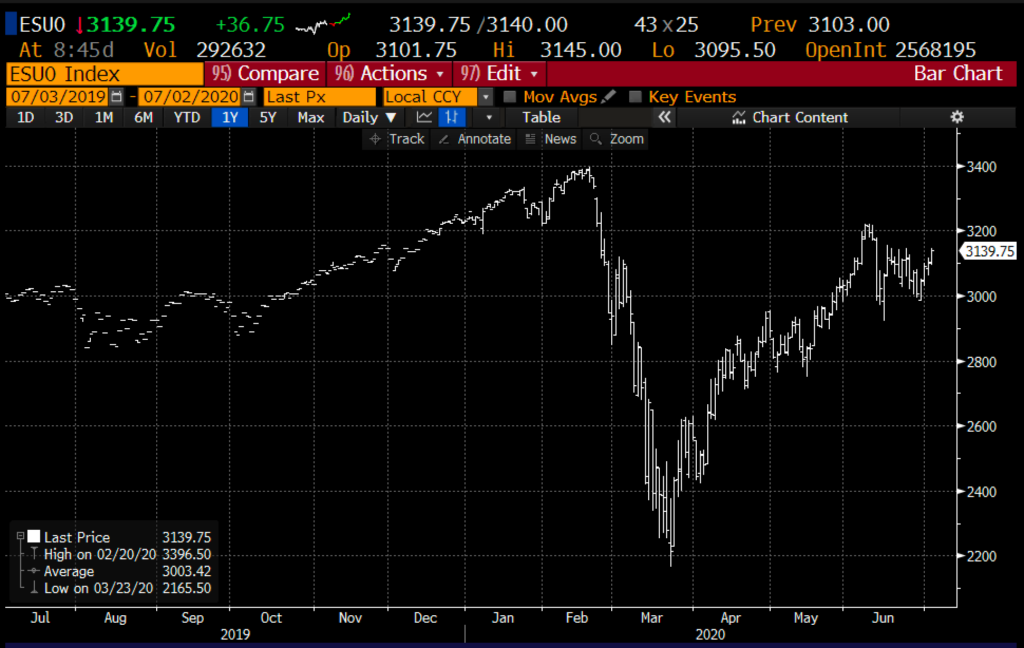 I don’t want to hate on the data, I would be very happy if fewer Americans are feeling the adverse effects of the pandemic induced recession. But what has happened in the last two months since the reopenings started with jobs being added back seems to be fairly transitory when you consider, when you really consider the lasting damage that the pandemic has done to our workforce and the likelihood the many businesses will be changed for good, needing far fewer employees to remain similar levels of pre-pandemic efficiencies, with many soon to see high-profit margins as a result, there will be no going back for many industries to the pre-pandemic ways. It is also worth noting that the data was collected for the June reports in the second week of the month of June, a whole heck of a lot has changed since then as many states are seeing dangerous spikes of cases, and despite far fewer death counts than we saw in March and April, they are turning back or pausing re-opening plans which suggest that until they are better therapies and more clarity on the timing of vaccines the recovery will go from a V likely to what will be the two-thirds of a W in the months to come. Just as the stock market sniffed out less-bad economic data and rallied ahead of it, it may do the same this summer if the recovery stalls. We will get more visibility (or less) depending on how much the corporate C-Suite are willing to tell us on their Q2 earnings calls that will start in mid-July, but with stocks where they are, with valuations where they are, they are clearly discounting current SPX consensus of $163 in eps for 2021, which would put the multiple at about 19x.

Might the SPX play a little catch up to the Nasdaq prior to earnings season, sure, but I remind what happened in early June when the index ripped after the May jobs report and then suffered a 6% one day decline on June 10th, as it became clear the virus would not just one day “disappear, like a miracle”. 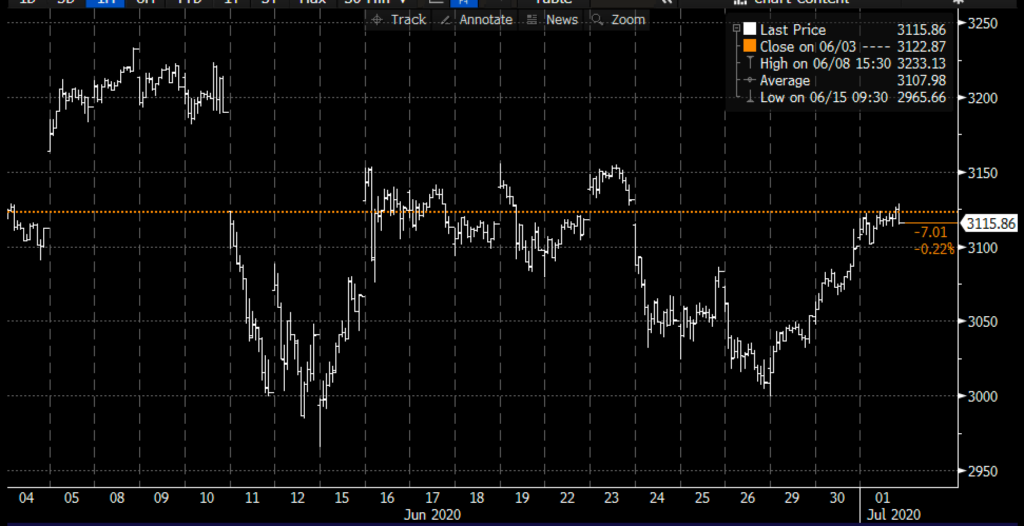 This summer we might flip the script a little from two steps forward and one step back to one step forward and two back as the investment community comes to grips that the Fed and Treasury’s bridge to a vaccine have limits, especially as it comes to markets, and that is something called gravity. Oh, by the way, enough with the Vaccine rallies… NO ONE Is going to take the first one, and it will take months and months to make tens if not hundreds of millions of doses and heck we have tens of millions of Americans who won’t wear a mask, who stand in solidarity with their dear leader in an effort to own the libs.

Have a great 4th of July Holiday, let’s remember its family and friends that matter most, I am going to ignore markets, economics, twitter, politics and focus on the things that make me happy and optimistic this long weekend!