Guy Adami and I are back for Week 2 of The Set-Up, thanks for all of the feedback we tried to tighten things up this week.

Here are our notes for the segment:

As for earnings there are not much expected this week, with just Nike (NKE) reporting their fiscal Q4 Thursday after the close. The options market is implying about a 6% move in either direction, which is rich to its ~4% average one day move following its last four quarters.

What’s interesting about the set-up in NKE into the print is that when the company last reported earnings on March 24th they were already talking about China reopening, a region where they have 7,000 stores, at the time 80% had reopened while online sales were doing quite well in areas hard hit like Wuhan and total sales in the region were only down 5%, a region they get about 15% of their sales from, but represents a massive growth opportunity. 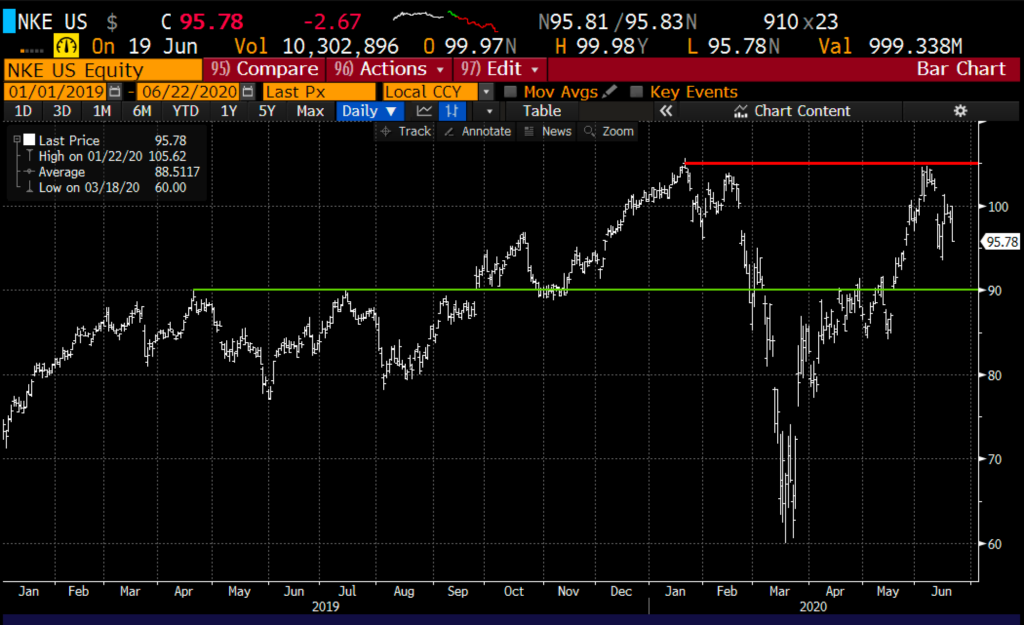 Apple’s (AAPL) Worldwide Developer’s Conference starts tomorrow with a Keynote from Tim Cook. I find these to be an absolute bore, and I don’t think Tim Cook and his cronies are very good at these sorts of things, they lack the star power that Steve Jobs had and they just look like posers trying to make evolutionary products sound like the next coolest thing.

The options market is implying about a $12, or about 3.4% move in either direction this week, which seems kind of fat, but the stock is up 19% on the year, 1% from its all-time high made on Friday, and up a whopping 65% from its March lows. As Guy has pointed out on our web discussions on numerous occasions, this stock is not without risks, even for the Own it, don’t Trade it crowd, with two peak to trough declines of about 37% in just the last two years. Clearly giving investors the opportunity to get in from time to time. Technical support is down near its breakout level around $325: 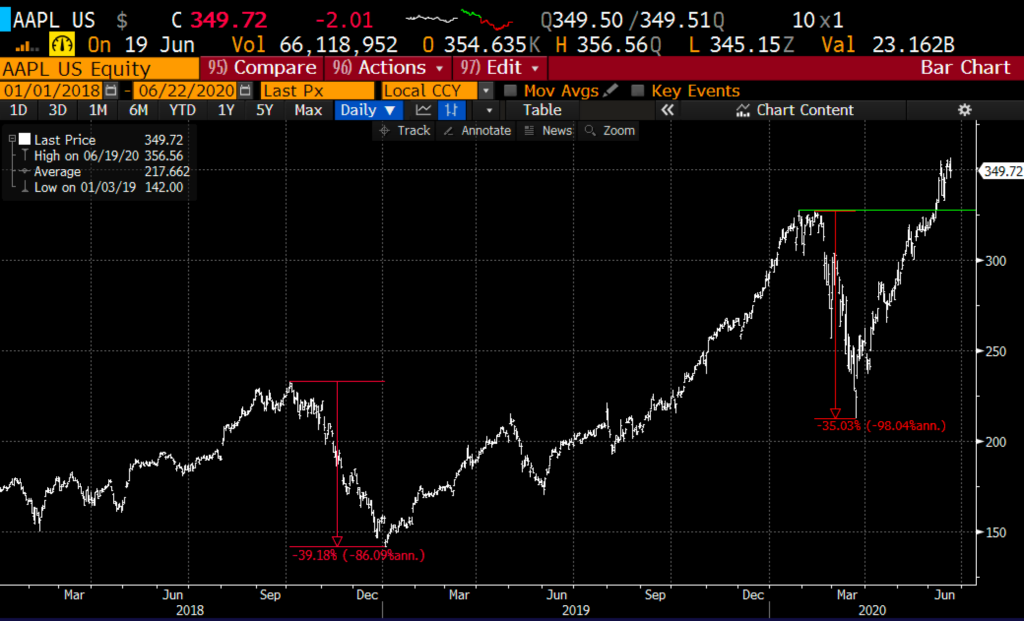 While expectations are not high on the product front, the stock’s performance suggests that investors are looking past calendar Q2 & Q3 covid induced pain and optimistic about a 5G upgrade cycle in calendar Q4. Good luck with that in the middle of a pandemic induced recession. I am not sure the upgrade super-cycle is gonna go the way most think…Samsung already flinching.

5G upgrade super-cycle coming to a pandemic recession-plagued nation near you in 2020.

Samsung is trying to jump-start sales of 5G handsets in the U.S., addressing the sticker shock that might have kept customers at bay https://t.co/mQf0LdkzTD

Despite being a software event, the company often talks about or introduces new hardware, extrapolating a bit the company has been rumored to announce their own chip to go into Mac’s, displacing Intel… here is what my friend and Fast Money guest Jared Weisfeld, Tech Specialist extraordinaire at Jeffries had to say on the topic in a note to clients this morning:

INTC Added to Favorite Names List. INTC has been a pretty big laggard with the stock making fresh 1 year lows vs. the SMH on Friday so perhaps WWDC marks the bottom when AAPL announces their internal chip solution for Mac? I would imagine this is a covering event for many. Over the weekend, I added INTC to my Favorite Names List given relative valuation and laggard status. The bear case is well known – everyone is concerned about sustainability of DCG trends and potential for PC weakness in the 2H as WFH benefits revert, but at just ~12x EPS and consensus estimates that have revenue growth decelerating by 3600bps (not a typo) between now and year-end, I think it’s a compelling set-up. 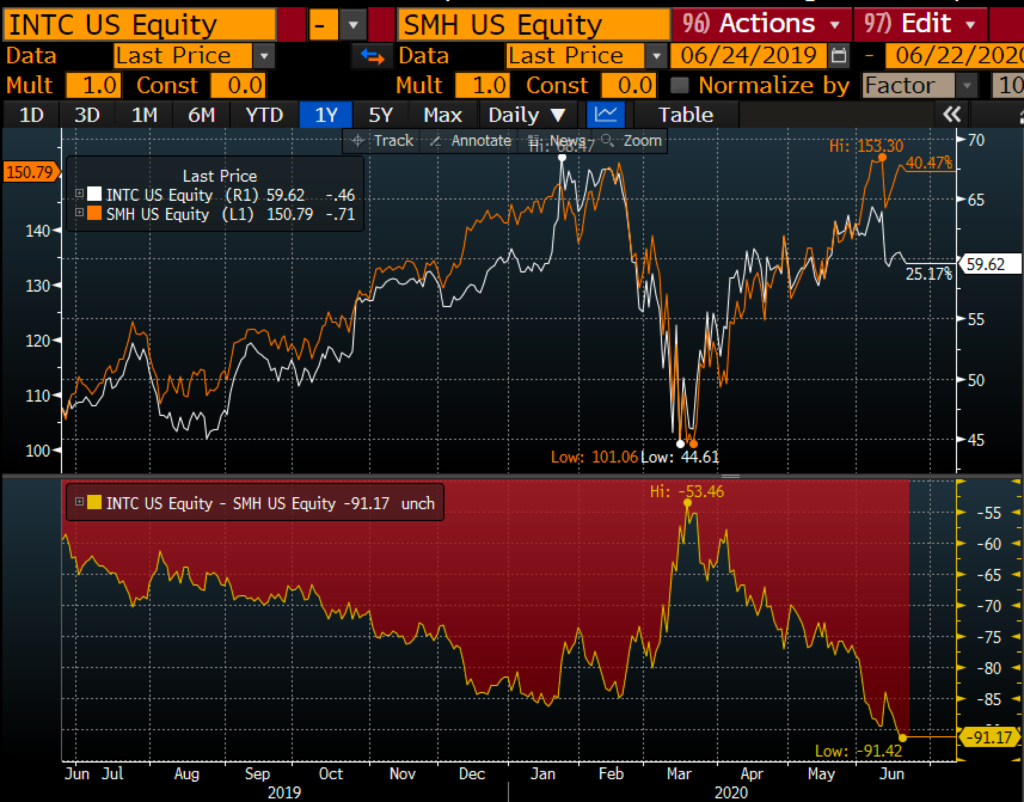 On an absolute basis, INTC is below the uptrend from the March lows… maybe we see a sell the rumor, buy the news in the stock? 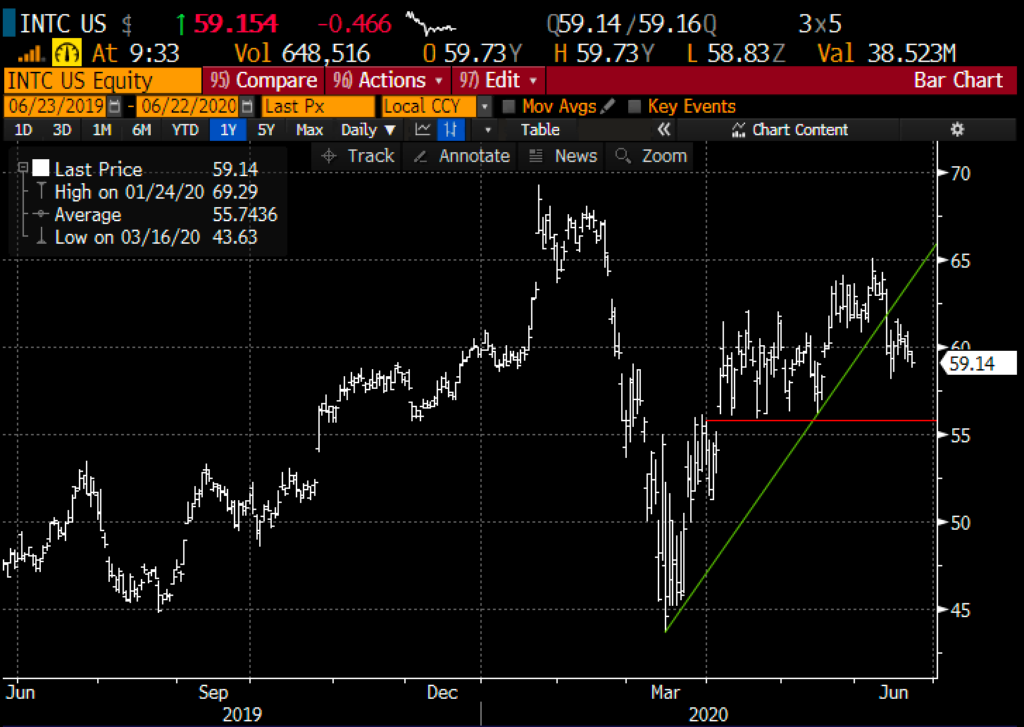 It looks to be a slow week when it comes to scheduled events, so we decided to talk about last week’s breakout to new all-time highs in the IBB, the etf that tracks the Biotech sector: 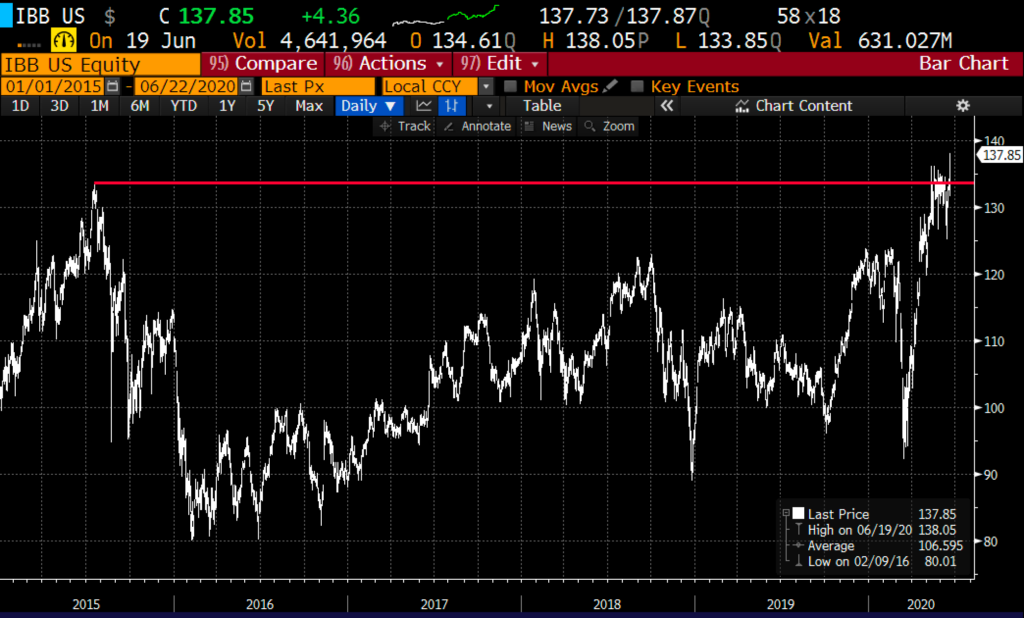 From its prior all-time highs in mid-2015 to its lows in mid-2016 the etf sold off 40% on fears that regulation on drug pricing and approval timing would weigh on the sector no matter who became president. It is fairly interesting with Joe Biden having a commanding lead in national polls, as the Democrat did in 2016, that investors are more hopeful about therapies and vaccines coming out of the group as opposed to being pessimistic that a Democratic administration, possibly with the House and the Senate could slap some serious regulations in 2021.

Tell me something I don’t know that’s gonna happen this week?

GOLD Breakout?? Guy says so, so I suspect it finally will. 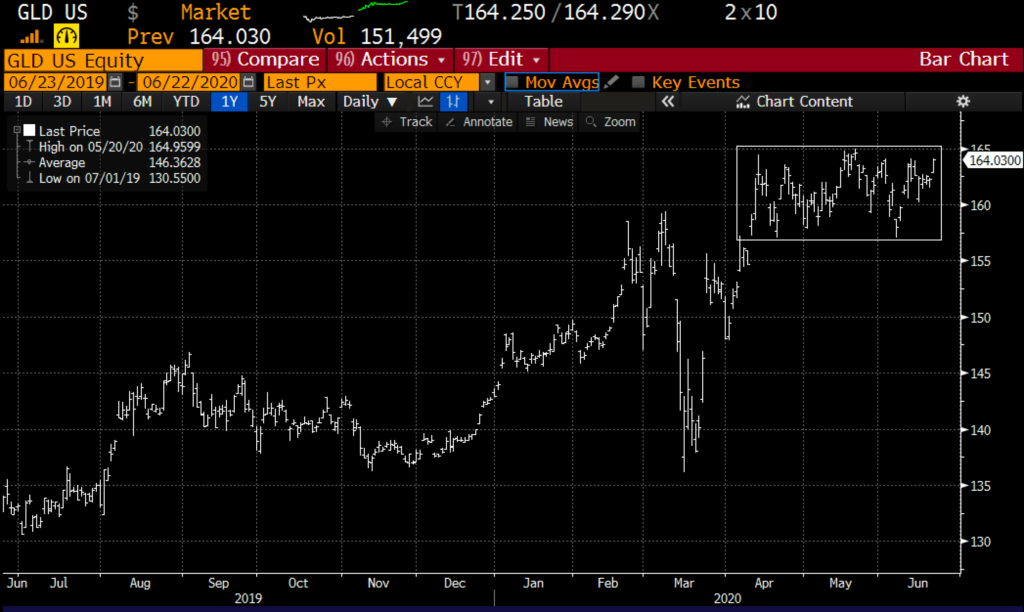