Back on March 30th, I made a bullish case for shares of SIRI (read here) when the stock was just under $5:

It is my view that SIRI (with Pandora) is a fairly unique media asset given its programming and the portability of its app product. I would also add that SIRI might be an important content delivery mechanism in the age of social distancing, especially when many of our favorite bands or talking heads have had to cancel live appearances for the foreseeable future.

What I find interesting about the streaming music space is that tech behemoths Apple (AAPL) and Amazon (AMZN) are sorely lagging behind upstart Spotify (SPOT) when you consider AAPL has an iOS installed base of 1.5 billion devices and AMZN’s 112 million Prime users in the U.S., per MusicAlly:

At the end of 2019, Spotify had 271 million monthly active users, including 124 million premium subscribers and 153 million ad-supported (i.e. free) listeners.

In June 2019, Apple announced that there were 60 million people paying for an Apple Music subscription. It hasn’t updated the figure publicly since then, although in the first half of 2019 it had added around two million net new subscribers a month – so may well have reached 70 million by or shortly after the end of that year.

In January 2020, Amazon announced that its music streaming service now “reached more than 55 million customers globally“, with its music boss adding in a Financial Times interview that “nearly all” of those people were paying for a subscription. This includes people using Amazon’s Prime Music tier, which is part of an Amazon Prime membership.

This one’s complicated. In February 2020, YouTube’s parent company Alphabet announced that there were more than 20 million subscribers to YouTube Music and YouTube Premium combined – the latter includes YouTube Music. As for non-paying users, in May 2018 YouTube revealed that “more than 1 billion music fans come to YouTube each month to be part of music culture and discover new music”. That figure hasn’t been updated recently though.

It is hard for me to imagine how Apple or Amazon Music would not want this scare media property, as an effort to cross-sell on their existing services while also adding a far deeper content stack.

At the time I detailed a defined risk way to play for a move back above $6 over the course of the summer:

Rationale: this is a low premium way to leg into some long exposure in a very unloved name, risking about 4% of the stock price. But this position also offers some optionality, with the potential to spread the Sept calls again by possibly turning into a vertical spread by selling a higher-strike call in Sept further reducing the premium at risk after May expiration.

Shares of SIRI closed below $6 on May expiration, and this trade idea did what it was supposed to do, leg into a longer-dated call. The stock is in a very well-defined uptrend, up nearly 50% from its March lows, and down about 10% from last week’s three-month highs. To my eye there appears to no real overhead resistance until the prior highs just below $7.50: 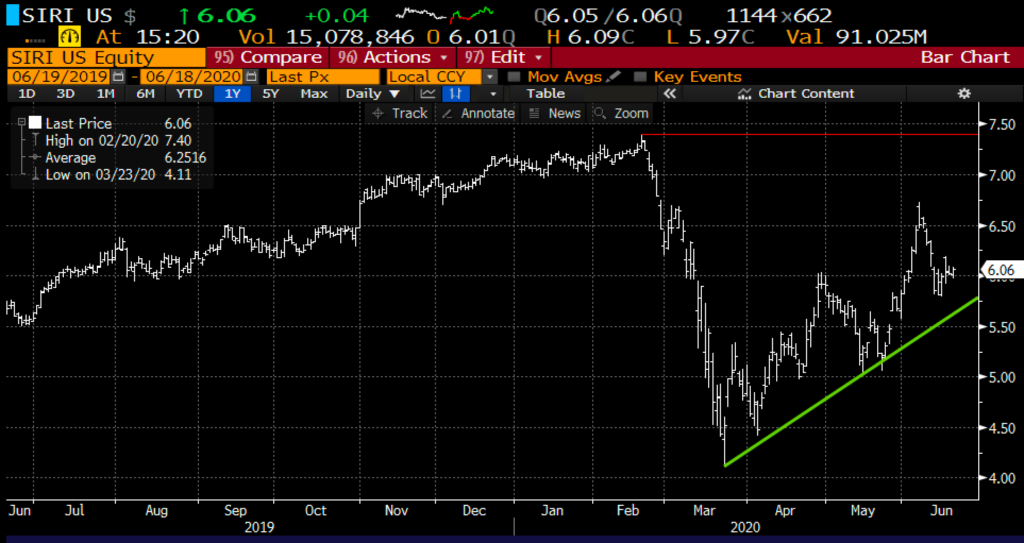 Shares of Spotify (SPOT) are surging today to a new all-time high on news that signed up Kim Kardashian to host a podcast on criminal reform and a deal with Warner to do podcasts on the DC comic universe. Are you kidding me, $4 billion in market cap for that??? 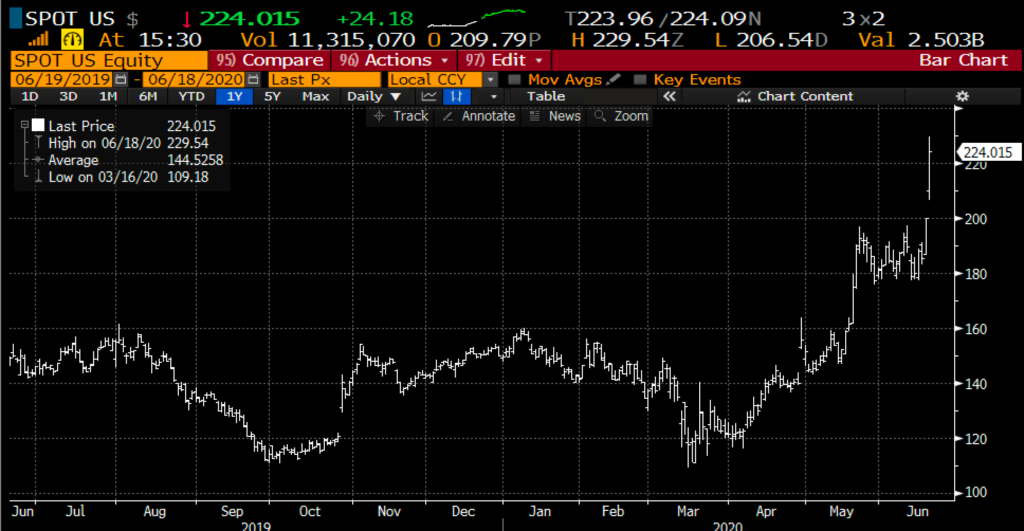 While SPOT’s move seems entirely irrational on this news, it brings me more confidence that SIRI’s assets and opportunities on the content front will soon attract similar attention.

At this point, the Sept 6 call that cost 20 cents as a result of the short May 6 call exporting worthless last month is now worth about 50 cents and it makes sense to now roll this view up and out a little bit.

Rationale: I am rolling the profit to now play for a new 52-week high, I still believe a large media or social property should own this asset.