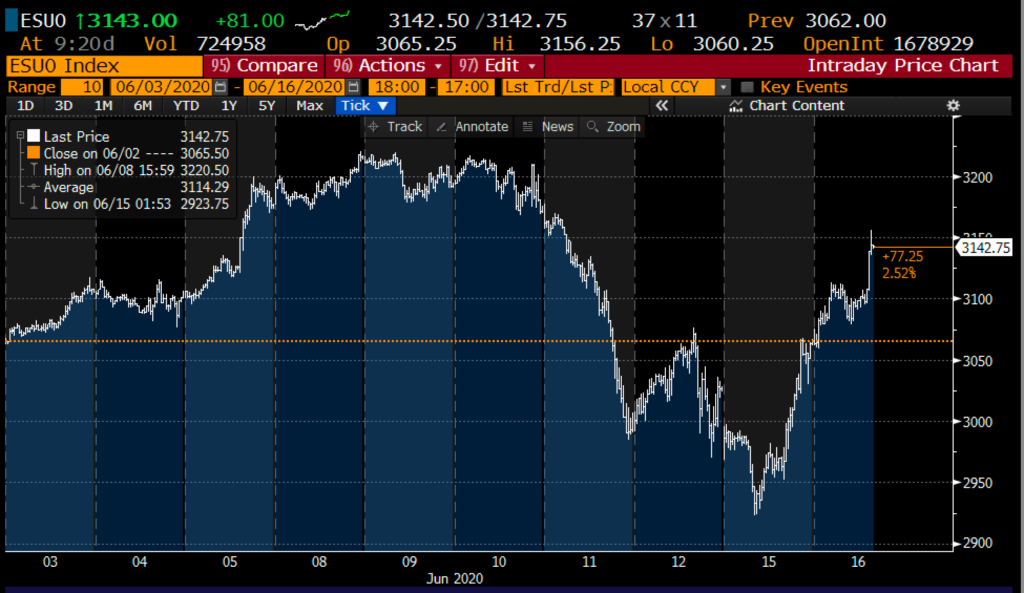 This morning better than expected May retail sales, coupled with the White House floating a $1 trillion infrastructure bill (that his party will never pass in 2020) on the heels of yesterday’s announcement by the Fed that they would buy individual corporate bonds (not just etfs as they have previously mentioned) has the S&P 500 (SPX) in spitting distance of last week’s 3-month highs.

Last Night on CNBC’s Fast Money I stated that after last week’s sell-off on Thursday, one of the worst percentages declines ever for the SPX, and the news on the corporate bond front that I am far less bearish on stocks than I was two weeks ago (click below to watch at 3:30 in), with one really important caveat, I remain very bearish on the outlook for the economy due to what I suspect will be a sustained unemployment rate of 10% for the balance of the year, possibly for the first half of 2021 with a consumer that has far less cash in their pockets once unemployment bonuses run out on July 31st.

Given the Fed’s intent to jawbone the stock market on the slightest bit of downward volatility and the unprecedented extent they are willing to go to buoy risk assets, I think it is fair to say that it would take a combination of a second coronavirus wave, failed trials for a vaccine and an unforeseen shock to the economy which would slow the pace of the economic recovery for investors to sell stocks indiscriminately again down to the March lows in 2020.

And David Rosenberg had it pegged last week, the Fed and the Treasury can merely steal from Peter to pay Paul in an effort to keep the money illusion intact for stock market investors. 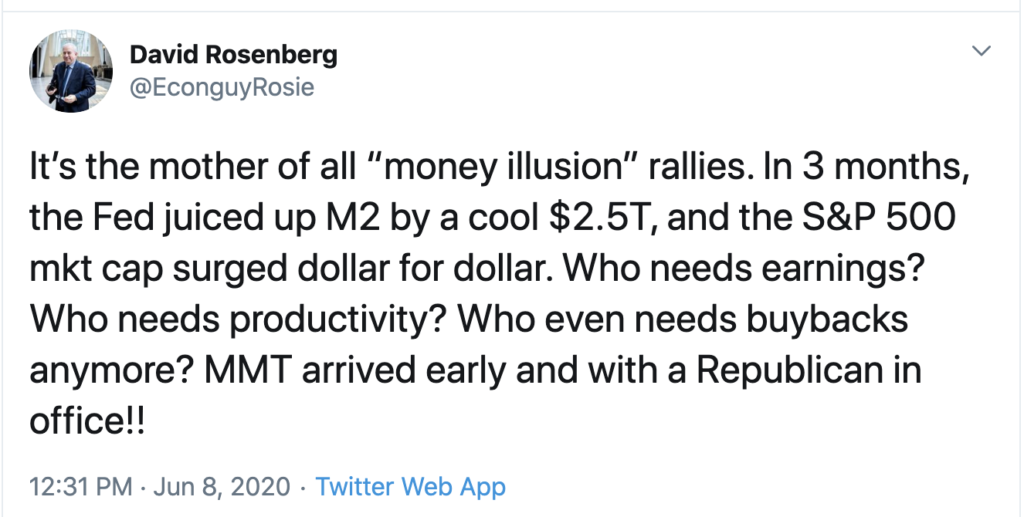 More than two months ago on April 3rd I detailed my technical view for the range in the SPX when the Index was 2530, We are now well above the high-end resistance level… 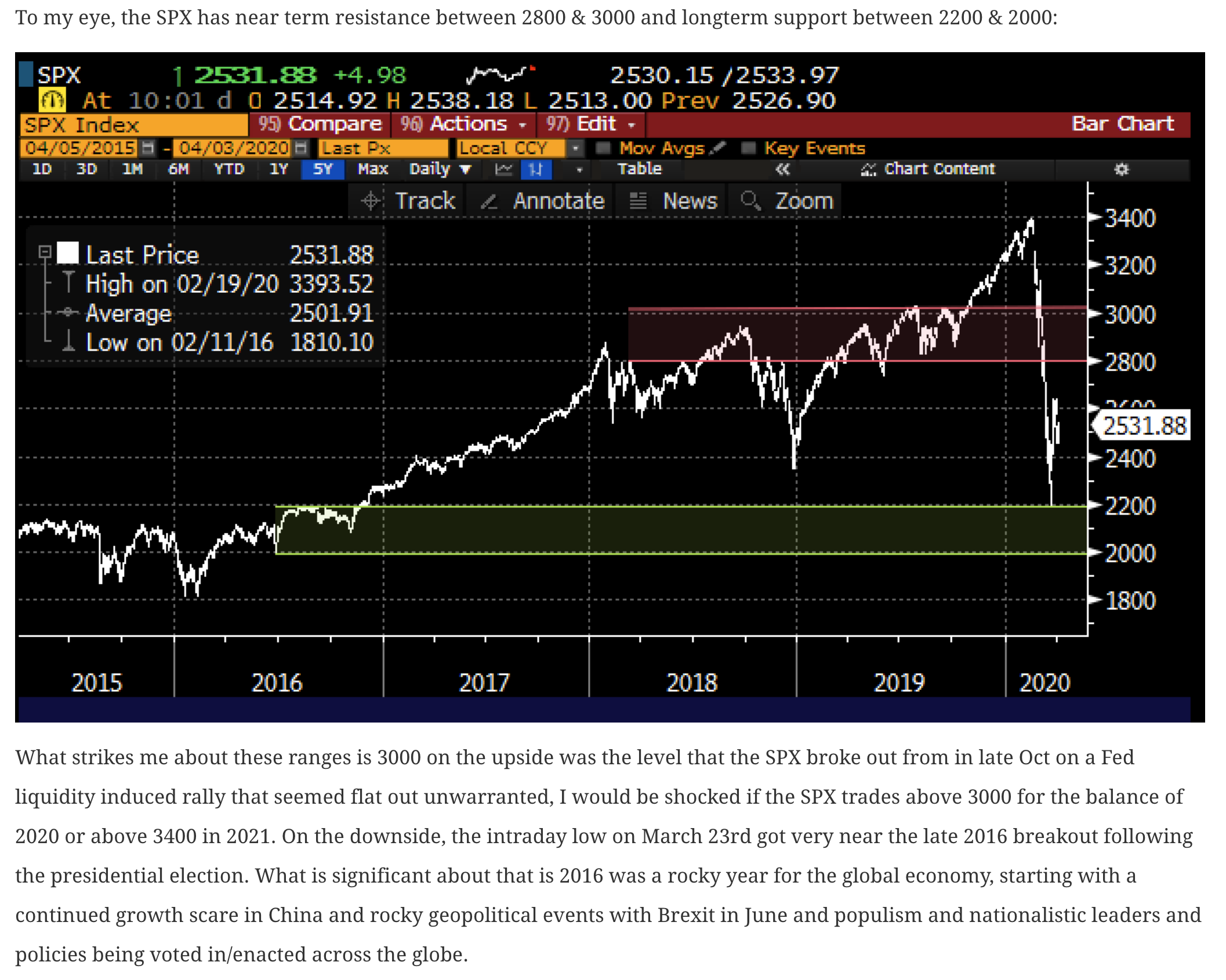 At this point, It seems very unlikely that a re-test of the March lows is still in the cards for 2020 (barring worst-case outcomes for the virus and treatment of it), with technical support now between 2700 and 2850 with technical resistance between last weeks highs near 3250 and the Feb highs just below 3400: 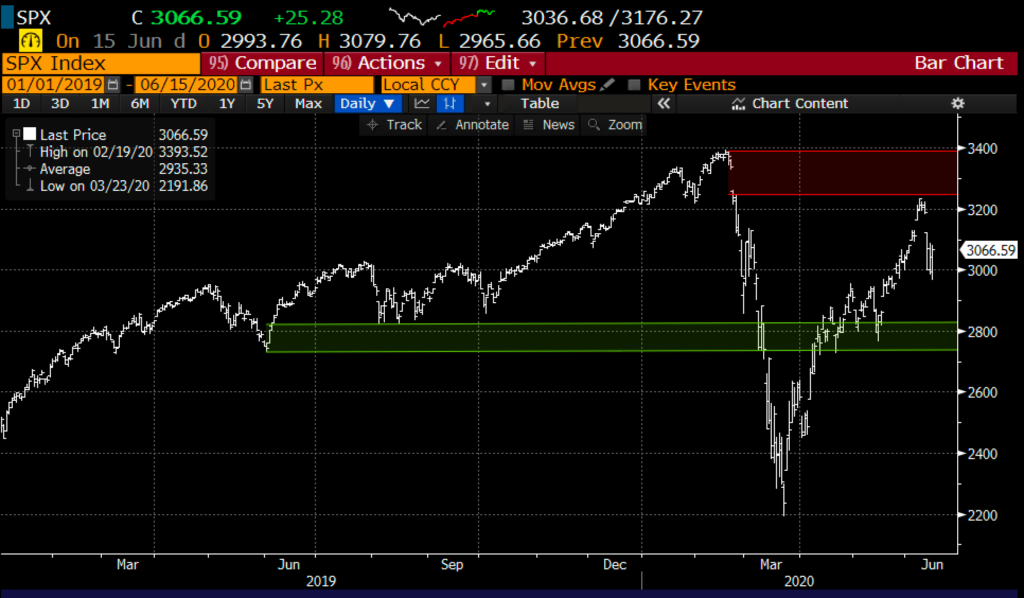 SO maybe this slight change in tune is not particularly helpful to some, at this point as I have said on many occasions of late, the stock market is a rigged game, at the very least there is massive asset shortage overcome by unprecedented monetary and fiscal stimulus.  I would also add for some of those readers/viewers who think I am a perma-bear, then you are not exactly paying attention, I have detailed just as many bullish trading opportunities in the last few months as I have bearish ones, but at this point, I am merely raising my bear case scenario for the broad market and still think that corrections are very possible giving usually positive sentiment and uncertainty with the election, China & North Korea, the next one likely to 2700 o 2800.

By the way, this was my take on March 24th at the lows, I still stick by the time thing, as I think the market will remain choppy until we have a vaccine and until we get a sense for just want sort of weight the exploding deficit will have on future growth: