My good friend Guy Adami and I are trying something new this week, something we are gonna call The Set-Up. If you guys like it we will do it again next week! The idea is to look at the upcoming week’s events and quickly give a preview on what we will be discussing on CNBC’s Fast Money as the events unfold. As usual, we don’t have crystal balls, we can’t tell you what’s going to happen, but being armed with the knowledge of the upcoming events, doing a little homework yourself, and reviewing your holdings/positions, you just might identify some trading opportunities that fit your worldview.

So here we go, enjoy:

Here are our notes:

As I write the S&P 500 Futures are down about 2%…. largely in response to the news over the weekend that Beijing Shuts Down Seafood Market After Dozens Test Positive for Coronavirus, per NYT:

Nearly all of the 53 people had worked or shopped at the market, which is said to supply 90 percent of the Chinese capital’s fruit and vegetables.

Nearly everyone who tested positive had worked or shopped at the Xinfadi market, a wholesale market on the city’s south side that sells seafood, fruit and vegetables, according to the Beijing health commission.

More than 10,000 people work at the market, which supplies 90 percent of Beijing’s fruits and vegetables, according to the state media. The virus was reportedly detected on cutting boards for imported salmon there.

What’s important about this is that it does not appear U.S. citizens will have much appetite for another forced lockdown, and our government is not a one-party authoritarian leadership, despite Trump wanting it to be. My take-away is easily the fear of production slowdowns for goods needed here in the U.S., weak demand for our agricultural and just a generally slower than expected global economic recovery.

Which brings me to the S&P 500 (SPX) which was rejected last week at its Feb 24th breakdown level, broke its uptrend from its March 23rd low, and now flirting with support at its 200-day moving average: 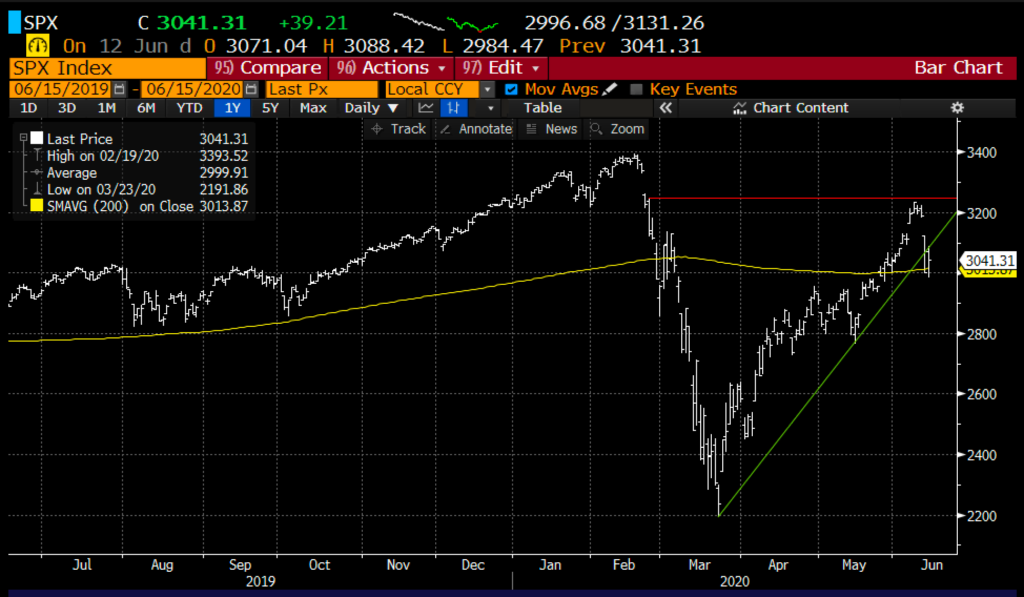 Monday: the CBOE Floor expected to open back up, three weeks after the NYSE went back… keep an eye on when they are back to normal or consider another shutdown if there was an outbreak.

Tuesday: Fed Chair Powell to testify in a semi-annual appearance before congress.

Oracle (ORCL): the implied move in the options market is about 6% which is shy of the 9% average one-day post-earnings move, but I would add that the stock rallied 20% on March 13th, the day after reporting fiscal Q3 results that were better than expected, IE not yet affected by the Pandemic and coming off of a 52-week low after the stock’s 29% decline in the prior two weeks.

The stock down only 2% on the year is stuck in the mud, struggling to overtake the downtrend from last summer’s all-time high, and its 200-day moving average: 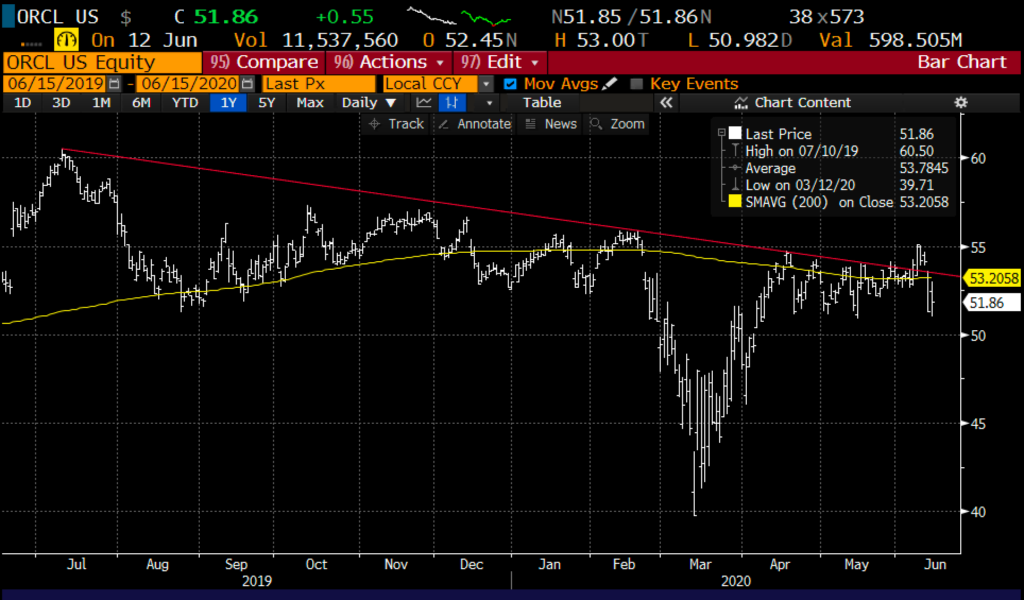 Lennar (LEN): reports its fiscal Q2 after the close. The options market is implying nearly a 10% one-day post-earnings move, which is rich to its 4.25% average over the last four quarters. The stock is up 6% on the year, and up 136% from its 52-week lows made in March. 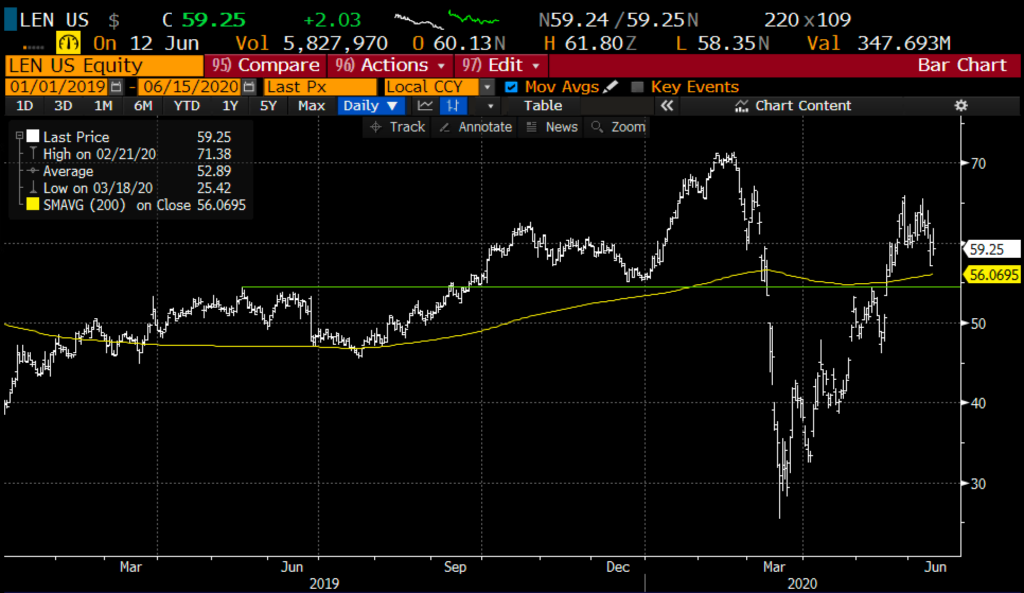 Kroger (KR): will report is FQ1 results, the options market is implying about a 7% one day move on Friday, which is rich to its 4.25% average over the last four quarters.

This chart is just downright weird, as the stock initially spiked to new 52-week highs in mid-march on the stay at home orders and retailers like grocery stores were perceived to be the clear beneficiary as they were deemed essential businesses. 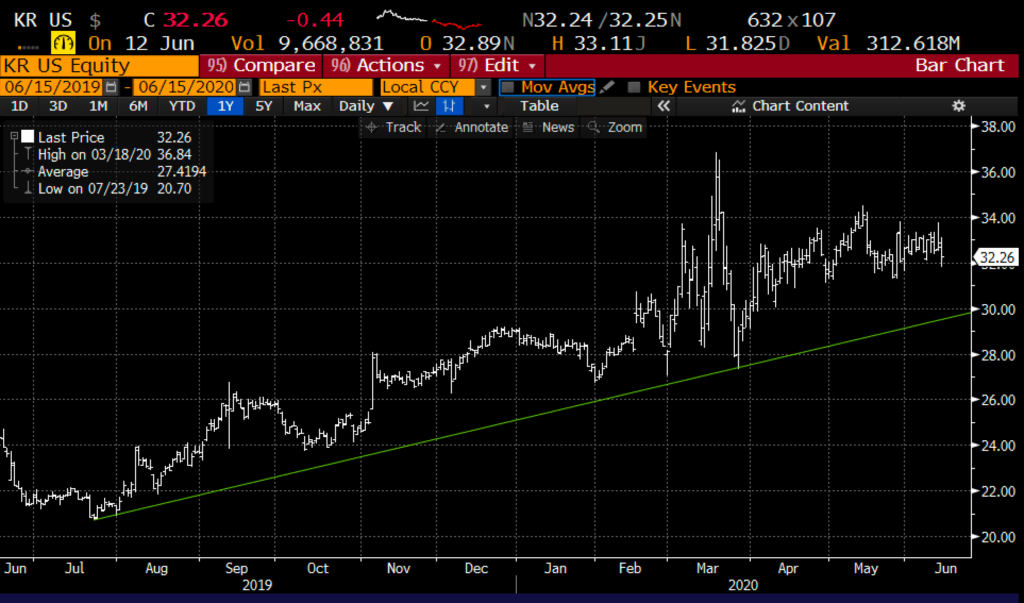 Carnival Cruise (CCL): will report its fiscal Q2 earnings after the close. The options market is implying about a 16% one day move on Friday, which is rich to its 11% average one-day post-earnings move over the last four quarters.

While the stock is up 150% from its March lows, it is still down 60% on the year, and down 73% from its all-time highs made in early 2018. With 24% of the shares outstanding sold short and Wall Street analysts clearly bearish on the name (only 4 Buy ratings, 13 Holds and 3 Sells), this stock is poised for squeezes on the slightest bit of good news on their path to reopening and their liquidity with a $14 billion market cap, $1.4 billion in cash and $14 billion in debt. Their revenue in Q1 was $4.8 billion, up 2% year over year, it is expected to $443 million in Q2, down 90% sequentially and year over year. 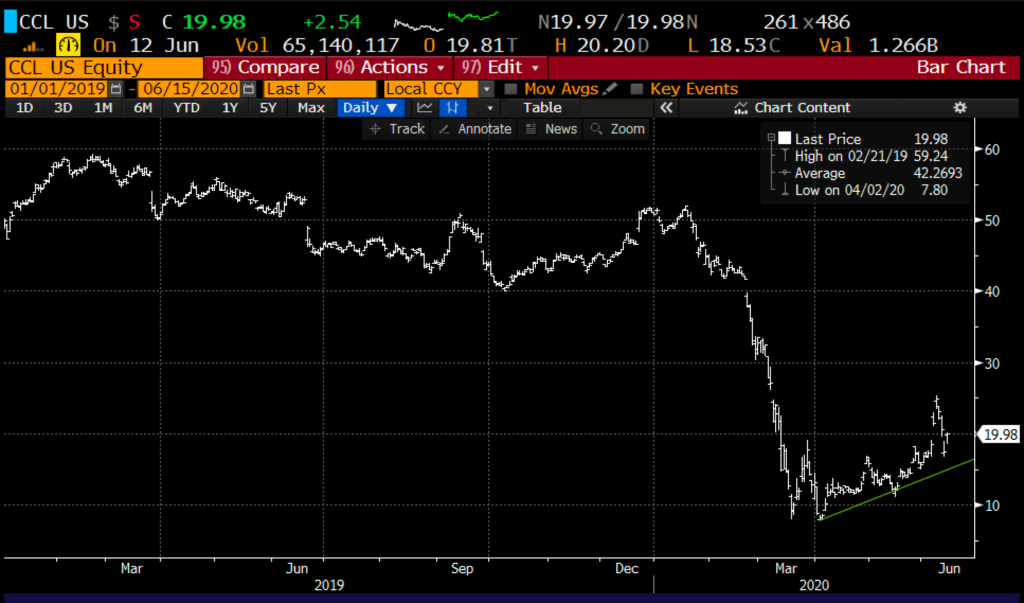 Lastly, this is probably one of the more important charts to keep an eye on this week, the 10-year U.S. Treasury Yield. The stock market did not like it when it in early March when it broke 1% on the downside, a new all-time low at the time. Last week’s bounce in yields came to an end with the last leg higher in the stock market, and now I suspect if the 10yr yield were to break the .55 closing low from March 9th that equities would once again not like the action of our rates going to or possibly below zero. 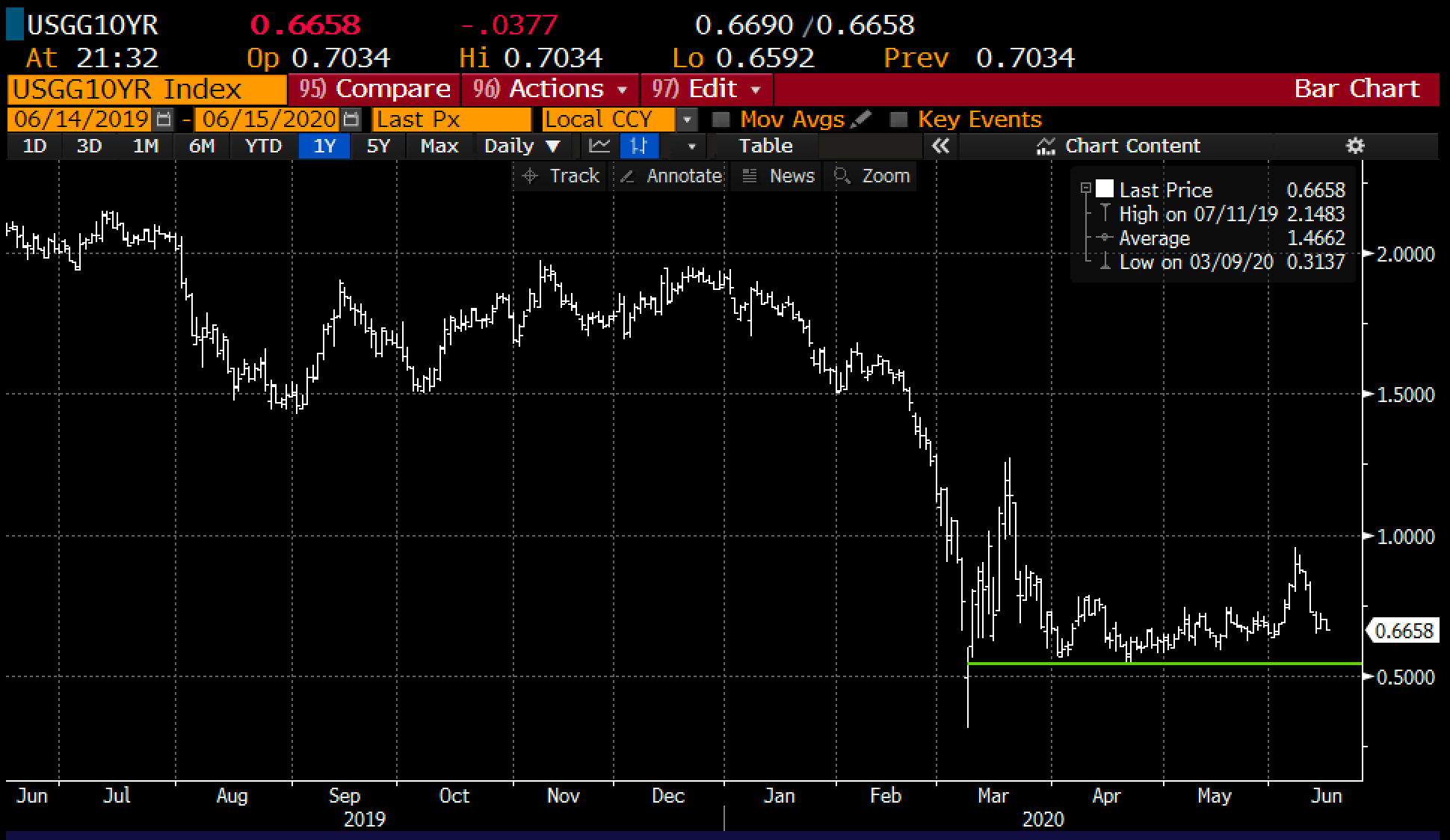