Semiconductor stocks have been the beneficiary of a couple of different forces in the stock market of late, the early surge off of the March lows into growth, specifically large-cap tech, but then also the rotation into early-stage cyclical stocks. They kind of check both boxes when you consider them in the context of the SMH, the etf that tracks the group when you consider it’s top ten components make of nearly 65% of its weight and have a nice mix between growth and value:

Off of the February highs, the group mildly underperformed the S&P 500 (SPX) with a peak to trough decline of 37% (vs the 35% decline for the SPX) but has outperformed fairly dramatically on the rebound, rallying 60% at its new all-time high made on Wednesday (vs the 47% gain for the SPX). The SMH is up 2% on the year while the SMH is down 6.5%. To my eye, from purely a technical perspective, the SMH might have just made a fairly obvious double top with the downside target near support at its 200-day moving average near $132: 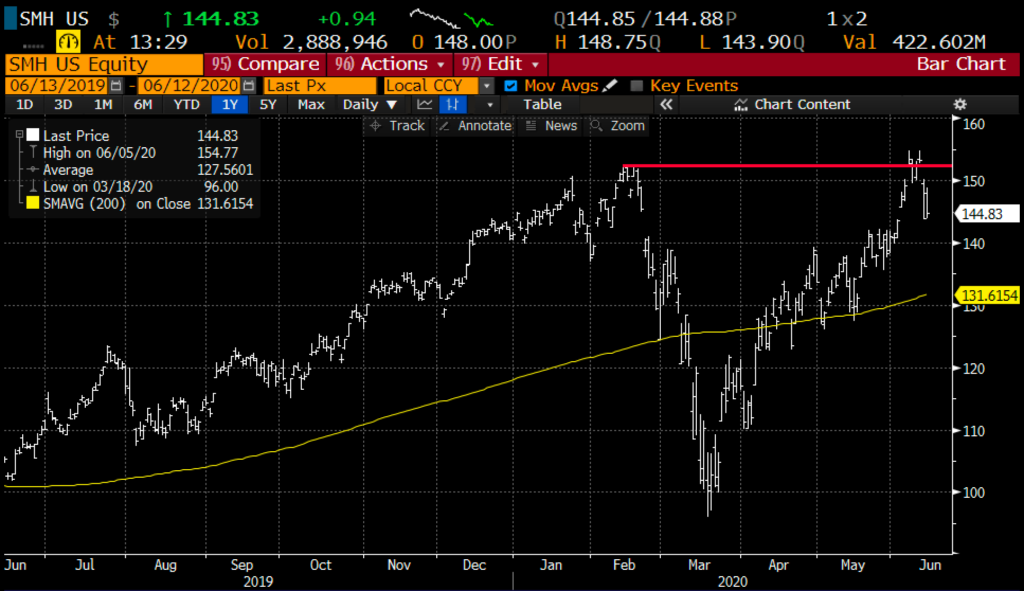 The five-year chart shows the stock’s near-perfect bounce from the March lows at its long term uptrend: 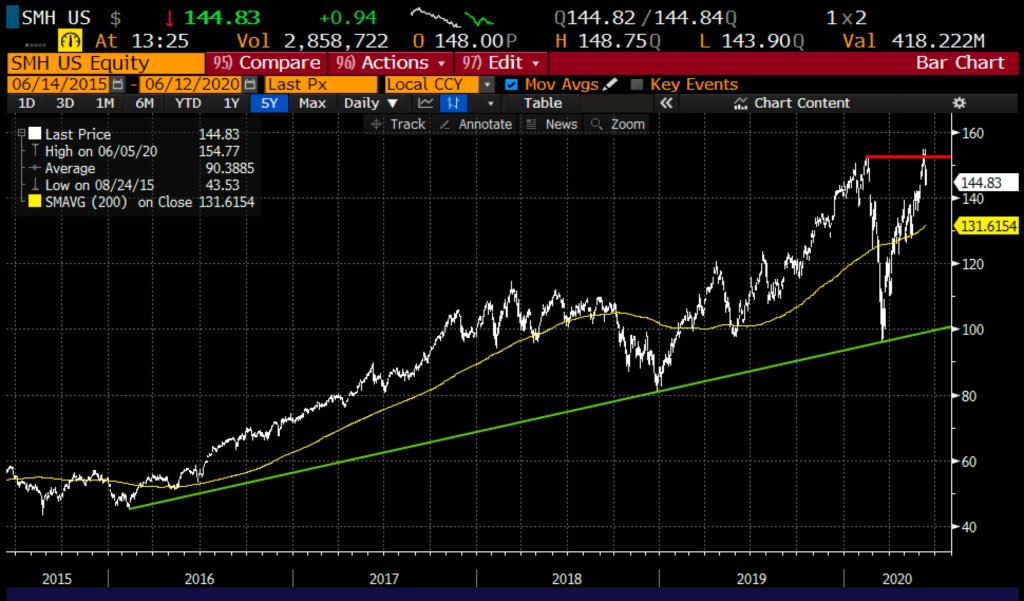 Investor optimism for Semi stocks clearly had a near-perfect V reversal, I suspect outpacing the prospects for a V reversal in the economy back its pre-Covid highs any time soon. Semi stocks will likely feel the pinch in the back half of the year as inventories could remain high, and pricing low if there is not a sharp bounceback in demand for their end-markets that could be mired for some time from production disruptions but also weak enterprise and consumer spending. We will have a better sense for this as Q2 earnings get underway in late July and into early August.

I also fully expect to see some downward revisions or sentiment shift back towards a higher unemployment picture for the next year that would reverse the miscalculated narrative of last week’s May Jobs data.

So what’s the trade? Target a move back to the low $130s prior to Q2 earnings as semis will be one of the first groups to see investors rush for the doors as investors look to reacquaint themselves with the prospects of a slower than expected economic recovery that the stock market appears have already priced in.

Rationale: this trade idea risks 2% of the stock price to possibly make 7% if the stock is down 9% in the next 5 weeks.