I get a lot of reader and viewer feedback on a daily basis via my Twitter and by email. It is amazing the correlation between negative comments in a largely anonymous public forum that is generally unregulated platform populated by usually anonymous angry people whose vocabularies lend themselves to 280 characters limits. I used to engage on Twitter with followers, it is no longer a good use of my time. The trolls won.

On email I get a lot of very thoughtful messages from people who identify with my mostly non-consensus views, most get what I am trying to accomplish in the relatively crowded financial markets punditry space, regularly I get respectful pushback when the perception is being contrarian for the sake of it, or merely just being stubborn, and I am happy to engage with those who take the time to have cordial discourse (feel free to reach me contact@staging.riskreversal.com).

SO let’s talk about the S&P 500 (SPX) at 3120, down 3.3% on the year, and down 8% from its all-time highs in made on February 19th (3393). The bull case at this point can be very simply summed up with the fairly familiar by now mantas of Don’t Fight the Fed, Cash on the Sidelines, and the Market is a Discounting Mechanism which is clearly looking past the Black Swan of the Covid-19 pandemic. I know that market strategists/pundits can contort almost any chart to match their views, and I have certainly drawn a few different lines on the SPX in the last couple of months. I have drawn new lines, different lines, special lines, to support my previous public proclamation that the index would not be above 3000 again in 2020 if it were to reflect the reality of the post-pandemic economy that will likely yield record-high unemployment for years, at a time when federal and local governments are essentially busted and corporations of all stripes will be in a perpetual headcount reduction for quarters if not years. I think enough is enough. 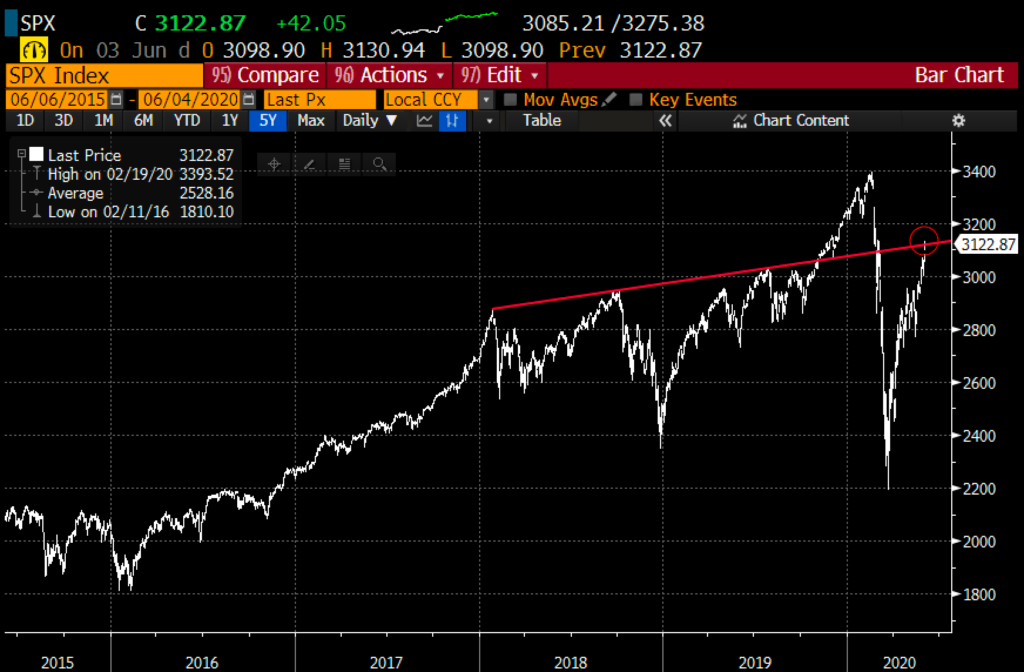 Now I was early to suggest that the oncoming pandemic would be far more disruptive to our economy and markets than most in the Financial Industrial Complex would have had you believe in Jan & February, I was even spot on when I suggested to the week if not day in late March that we would have a vicious short-covering rally and that 20% rallies are features not bugs of bear markets. The trolls would say that was merely the alarmist rantings of a perma-bear since the GFC, to that I say have at it, you don’t read RiskReversal every day merely see CNBC chyrons and the occasional tweet.

But since that initial 20% bounce, at some point in early April, I got extremely Bearish on the prospects for a quick economic recovery back to pre-pandemic levels.

I am NOT your financial advisor, broker, or hedge fund manager, but on April 9th I wrote a piece that I whole-heartedly stand by (Re-Balancing…Act Now?) that speaks to my positioning regarding equities:

If you are worried that current health and economic crisis lingers for next year, then stock market will make new lows from last month and the recent bounce of 25% off of the lows is presenting an opportunity to get more defensive. Capital preservation should be top of mind in this environment.

And reiterated that view on April 17th: (It’s Time to Prepare for the Worst and Hope for the Best);

the stock market has been the wrong lens to view the health crisis brought on by the virus. It also seems incomprehensible that the virus mitigation efforts of the last two months does not morph into one of the worst economic shocks we have seen in decades, likely to result in the deepest and longest recession since the Great Depression. I know, I know, just like the unprecedented nature of the crises, the monetary and fiscal stimulus that has been thrown at it, and will continue to be is also unprecedented. But this is the third bailout of capitalism in 20-year by the Fed and our Treasury, and I worry it is straining the very fiber of our financial and societal institutions and having a decreasing impact for the overwhelming majority of our citizenry. And again the propped and inflated stock market is NOT the economy, despite the Fed, and the President often confusing the importance of not letting the stock market reset.

I stand by all of it, but on mere price, I am clearly wrong, the SPX is up 10% since mid-April. But here is the thing, I am not here to manage your finances, but to attempt to offer you an informed perspective, one that is NOT conflicted and you can take it as merely one input into your own investment/trading process or even a contrarian indicator.

At this point, the stock market is totally rigged, and those in the FInancial Industrial Complex that have Career Risk for being on the wrong side of a move for too long will continue to pump the most convenient narratives. I know I know stock markets go up MOST of the time, but this is far from a normal time, and just as Jan/Feb was an inflection point for the global economy and markets, I think it is fair to say that this summer might be equally important, now with more levers of risk and equally high levels of complacency especially relative to the increased areas of risk.

The goalpost for the economic recovery in 2021 and beyond will routinely be moved, and not in the way that supports the stock’s market’s V reversal in my opinion. For those of you who can separate the two keep an eye on the progress of unemployment in the back half of this year, I suspect it will be the thing that has many economists changing their tune about the speed and strength of a near-term recovery and also the impetus for market strategists to downgrade their rosy 2021 outlooks that looks past covid.

Here are a few recent articles/tweets that might help shed some light on the change in, or distortions of economic data, drive home the disconnect between what the stock market is saying about a return to consumer-led recovery on the heels of a rapid rise in employment now that the perception that the worst of the virus has passed:

Surge in U.S. Incomes Masks Fragile Situation for Many Americans April’s record plunge in U.S. consumer spending came with an unexpected twist: a record surge in Americans’ incomes, which had been forecast to decline amid massive job losses.

Millions Relying on Pandemic Aid Can See Its End, and They’re Scared, Emergency programs have cushioned the shutdown’s impact on workers and businesses and lifted the economy, but may not outlast the coronavirus crisis.

Blue-collar jobs accounted for the overwhelming majority of layoffs in the hardest hit industries during the pandemic. The next round of job cuts will likely hit white-collar positions much harder, with the scope depending on the recovery’s speed: Bloomberg Intelligence pic.twitter.com/Gxm01XvYO8

The historic rise in precautionary savings will act as a restraint on US consumer spending. The personal saving rate will decline in 2 phases over the coming months with income cliffs from expiring fiscal aid representing downside risks to consumer outlays https://t.co/It9Fq15olD pic.twitter.com/0LU3rwNzH1 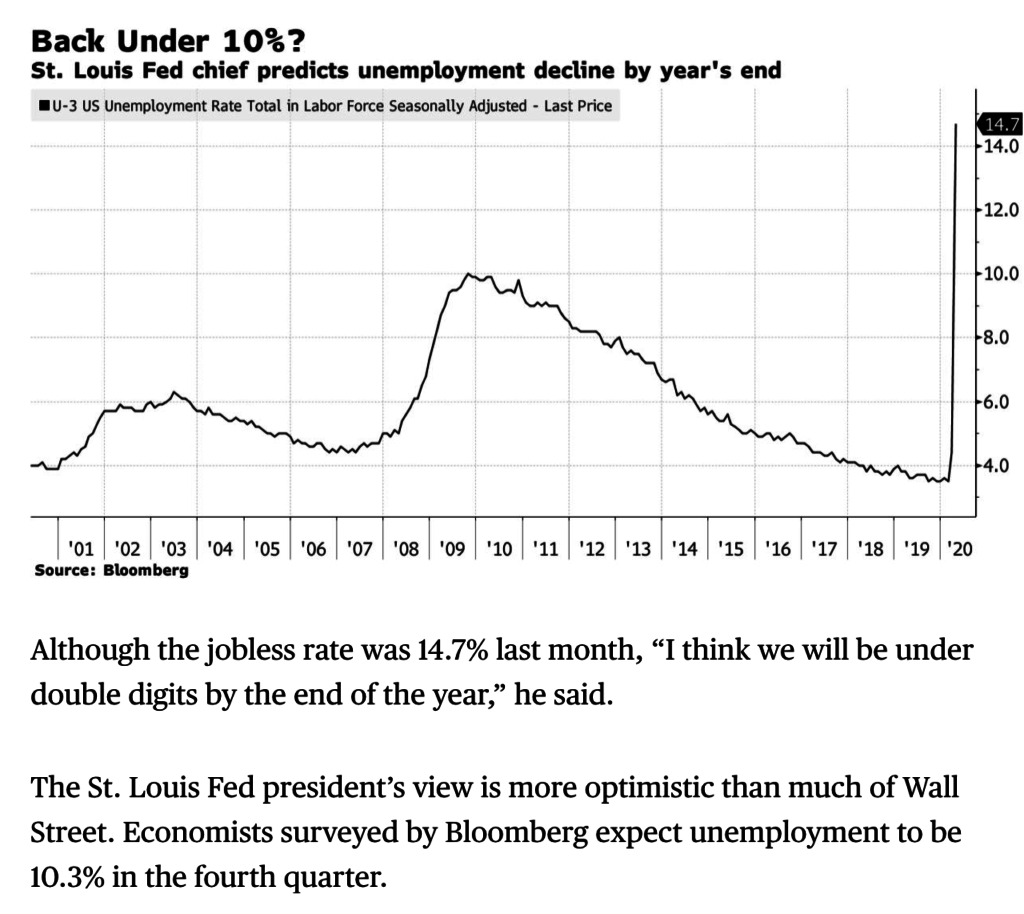 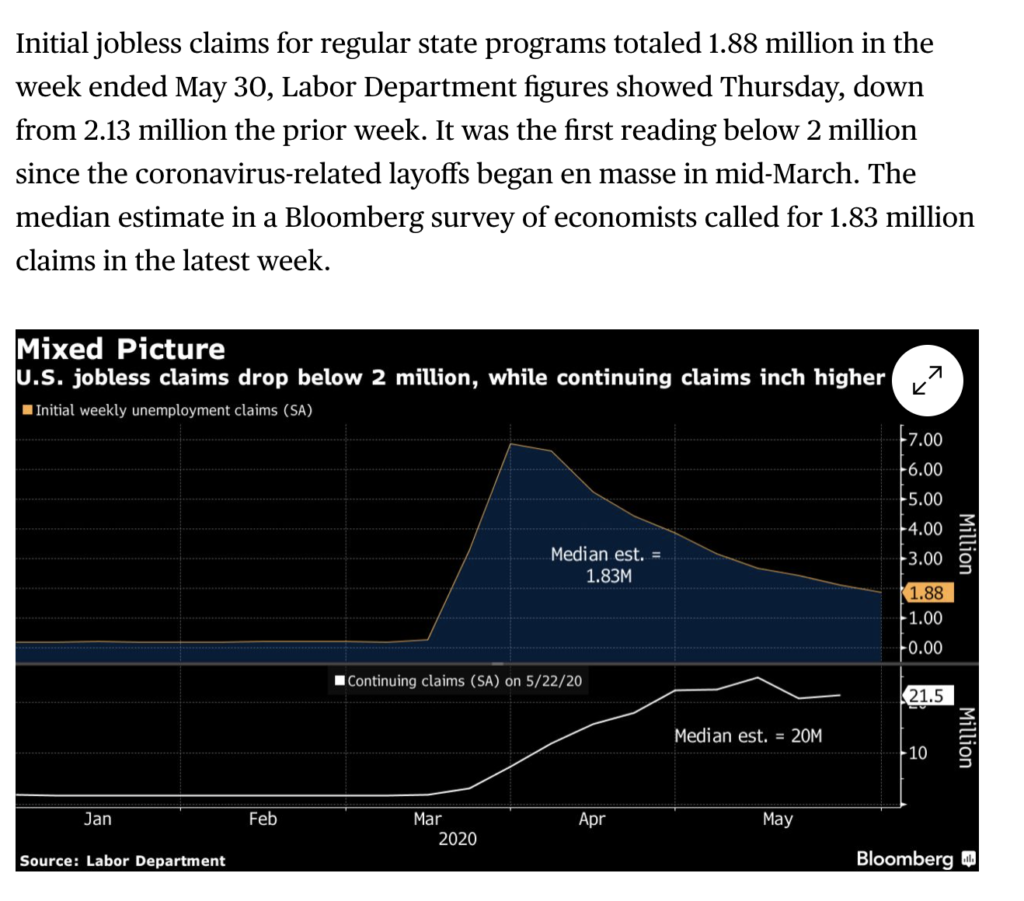