Investors are in FOMO-MODE.  The Nasdaq Composite is up nearly 8% on the year, while the S&P 500 is down less than 4% on the year. While I keep hearing about a rotation out of high valuation growth to cyclical-value I see plenty of pure technical set-ups in high-valuation growth stocks that look attractive from a trading perspective.

While perusing some charts this morning, LYFT’s stood out as one that is poised to pop as the stock has held its uptrend from its March lows and is now pressing up against a key resistance level, its early March breakdown level and its late April high. A breakout above $35 could yield a stock in the mid $40s, possibly re-testing its downtrend from last year in the high $40s; 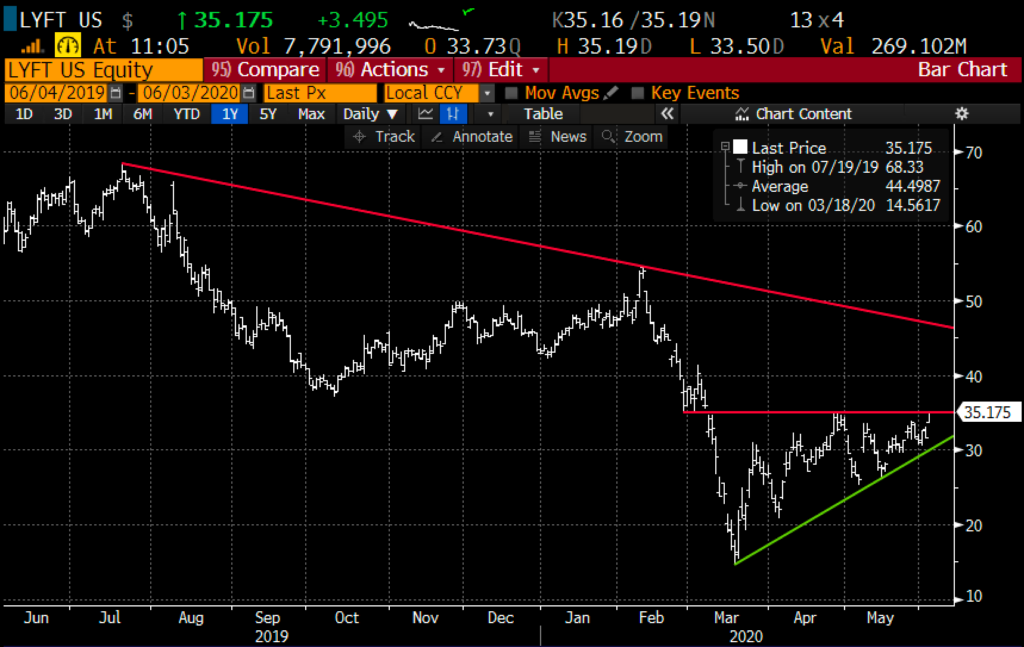 Shares of LYFT are still down 18% on the year, down 35% from their 2020 highs, but up 140% from its March lows. This extreme volatility is why short-dated options prices remaining very elevated with 30-day at the money implied volatility (blue line below) near 60% at a fairly wide spread to 30-day realized vol (white line below, how much the stock has been moving), making options look fairly expensive for those looking to express defined risk directional views: 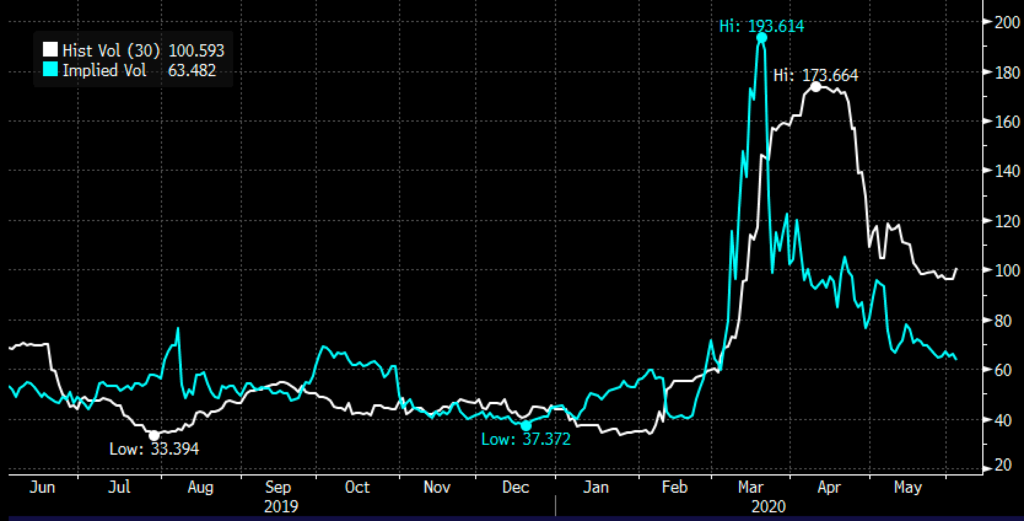 For instance with the stock at $35.30 the July 35 call is offered at $3.25 or about 9.25% of the stock price. This means the at the money straddle (the call premium + the put premium) suggests that the implied move between now and July expiration is about 18% in either direction. That seems extreme but look how stocks have been moving all year, and would it be unheard of to think that LYFT could be unchanged in 5 weeks if the stock market keeps heading higher, or that the stock could be back below $30 if the market started the unthinkable and took a turn lower?

But I would also add that with mega-cap tech stocks like Microsoft, Apple, Alphabet, and Amazon at or near all-time highs we might see some M&A, and I would think a company like LYFT with very solid management and balance sheet, with the potential for massive data collection opportunities could present a very interesting takeover candidate for someone like Alphabet that already owns a 4% stake in the company. With less than an $11 billion market cap and $2 billion in net cash, I suspect this company could be had for just a $5 – $10 billion premium. What the heck would that be for any of the MAGA complex, it is a rounding error on their cash balances and their stock’s would probably all gain at least that much in marker cap the day of the announcement.

If I were inclined to set up a “takeout – trade” I would normally consider a risk reversal selling an out of the money put to help finance the purchase of an out of the money call. For instance with the stock at $35.30 I might look to Jan 2021 expiration and sell the Jan 25 put at $2.75 and use the proceeds to Buy the Jan 45 call for $3.50, resulting in a net debit of 75 cents. If the stock were between 25 and 45 on Jan expiration I would lose 75 cents. If the stock were 25 or below that I would be put 100 shares per 1 short put and suffer losses below plus the 75 cents in premium paid. I would have gains above $45.75 (the long call strike plus the premium paid). On a mark to market basis prior to Jan expiration, this position would show losses as the stock moves closer to the short put strike and gains as it moves closer to the long call strike.

For those who agree about the possibility of a potential takeout for LYFT but do not like the idea of being short a put and prefer to define their risk, then call spreads could make sense. For instance with the stock at $35.30 the Jan 40 – 60 call spread costs about $4, or 11% of the stock price, with a break-even at $44 up nearly 25%. The options market is suggesting there is about a 41% probability that this trade is break-even on Jan expiration and only a 16% probability that it is at max value near $60.

A trader would only consider these sorts of trades if they had a reasonable conviction that the stock could rally to the mid $40s in the next 6-7 months for reasons OTHER than a potential takeout, as that is clearly a low probability event and would merely be added top the narrative of the stock helping sentiment.