Yesterday in my In The Money series with Fidelity Investments I discussed two defined risk trade ideas, watch by clicking on the sweet-ass pose by me below: 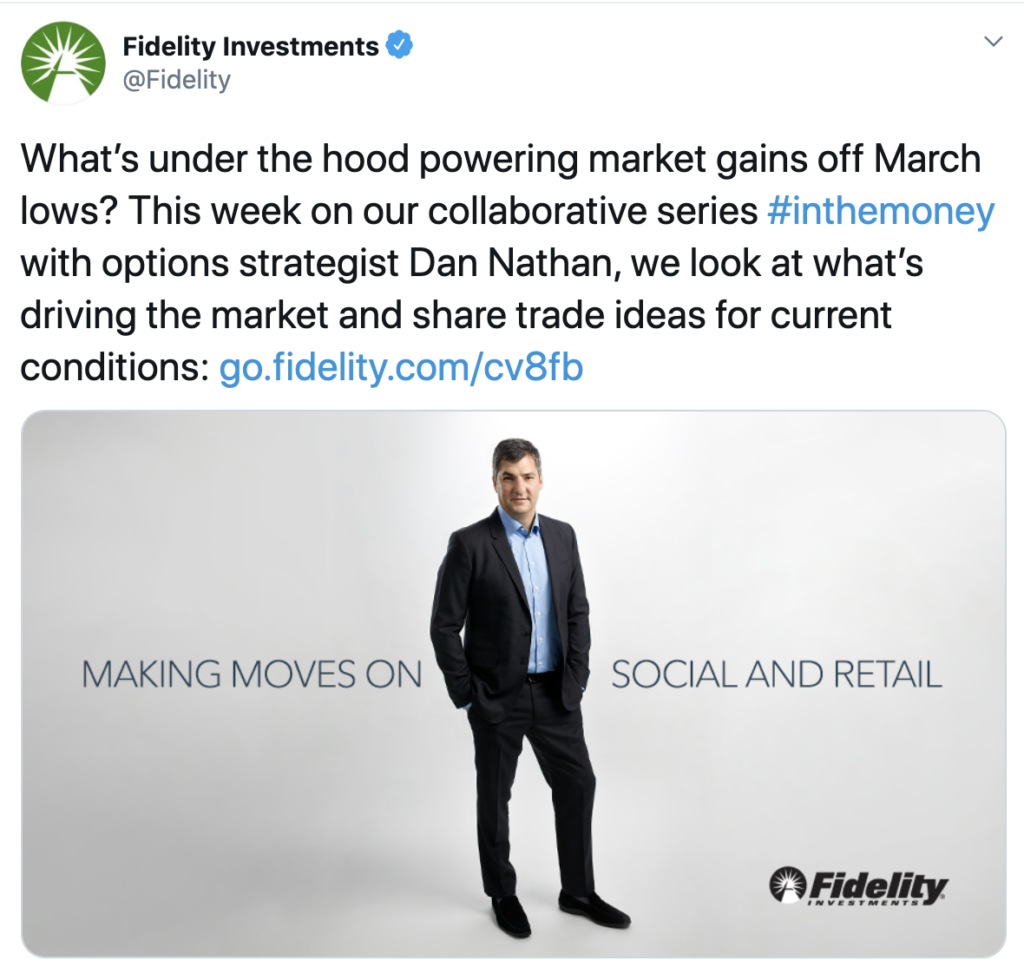 First, we discussed the pesky technical level of 3000 in the S&P 500, two consecutive gaps above it this week, two quick failures until yesterday’s close. In March on Fast Money, even after on March 23rd at the lows I suggested an epic short squeeze if 20% was coming, I also said that I would be shocked if the index was above 3000 this year and above the prior high near 3400 next year. Well, traders are looking for the index to build on yesterday’s close above the important resistance level and ultimately set the stage for a re-test of the highs, not the lows which I still think is a decent possibility in the second half of 2020. 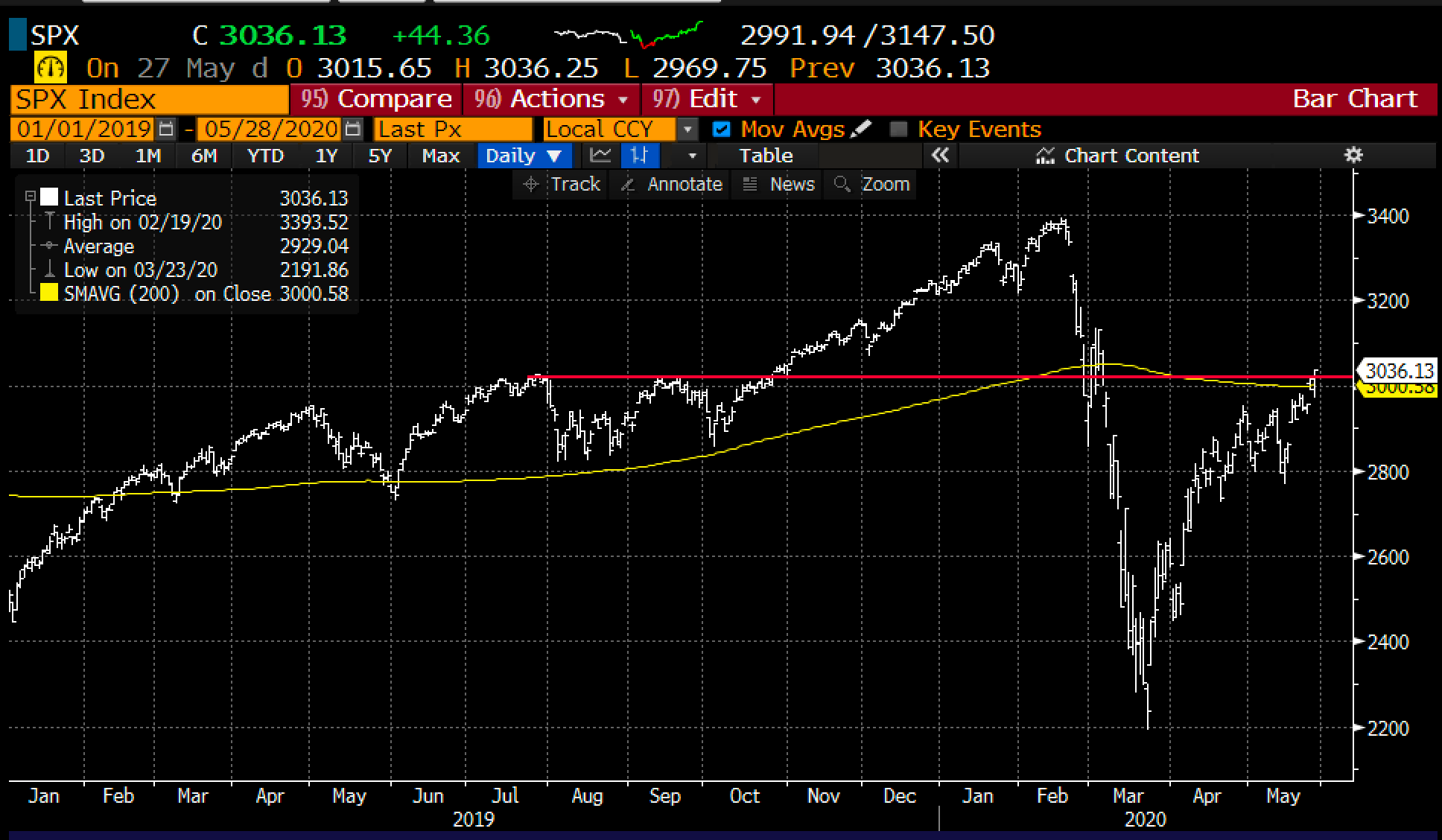 Every trader/investor is wrong on at least one thing nearly every day in some way shape or form, the difference between them and one that writes, tweets and speaks daily about their opinions on markets and stocks to the public is that we have to constantly update those views and explain why we are wrong, which can be as hard as managing actual risk, most of you will never know how hard it is to do both while working a two-month-old haircut on national tv 😉

The first idea we discussed was in SNAP. Last month when the company reported Q1 earnings that showed better user engagement, growth, and monetization the stock rallied 36% in a single day as the company was clearly benefitting from kids having a ton of time on their hands with schools closed and facing a need to stay connected. I suspect these trends will moderate a good deal as we head into the summer, as the rate of change will clearly slow, but also the momentum that TikTok has in the U.S., which I suspect will be dramatically crimped SNAP attention-share with kids. Last week TikTok’s Chinese parent ByteDance, the most highly valued private tech company on the planet at $140 billion hired Kevin Mayer from Disney, the former media giant’s streaming head, to run the TikTok product and also serve as the COO of the parent. Mayer was responsible for brokering the deals to buy Pixar, Marvel, and Lucas for Disney. While he will face stiff opposition to buying U.S. assets by the Federal government, he might be very successful in poaching tons of U.S. talent, celebs, and sponsors to draw users time away from platforms like SNAP.

SNAP could set up as a good short candidate back towards its recent gap from April, of course with defined risk. Here are my notes from yesterday’s trade idea: 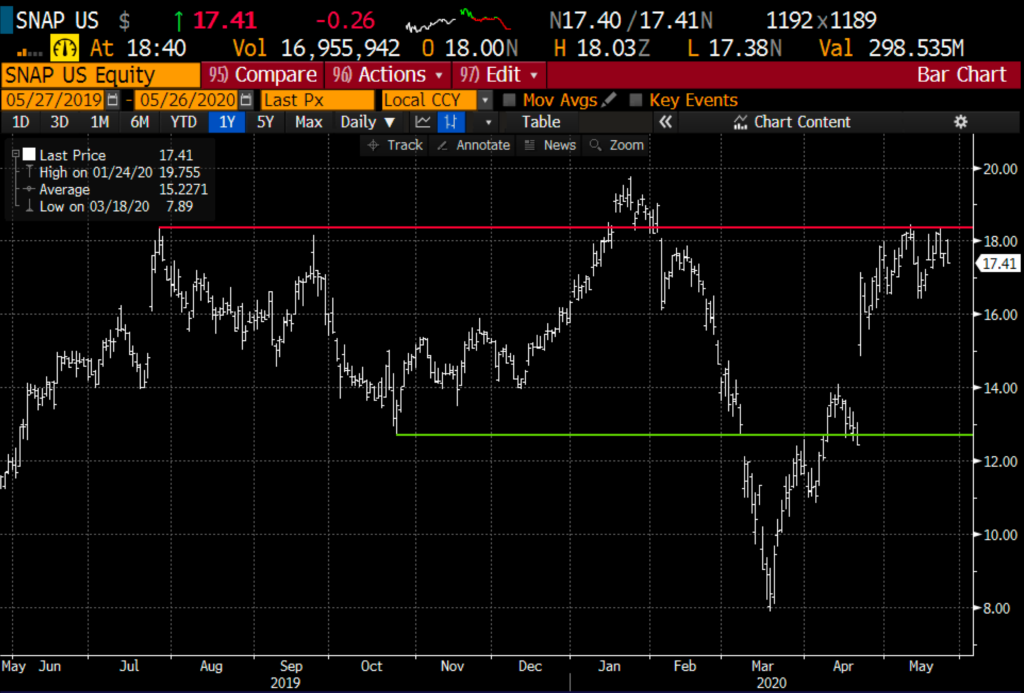 For the second trade idea, I took a look at the set-up in Costco (COST) into tonight’s earnings. For those who are long the stock I think it makes sense to consider yield enhancement via overwriting into the print, here are my notes:

Costco (COST) reports Q3 results Thursday after the close. The options market is implying about a $11 or 3.5% one day move Friday, which is rich to the 1.25% average move over the last four quarters.

Break-even on June expiration:
Profits of the stock up to $320, stock called away $15 at the short strike, but really at $323 up 6% in three weeks.
Losses of the sock below $302 the call premium acts as a 1% buffer to the downside. 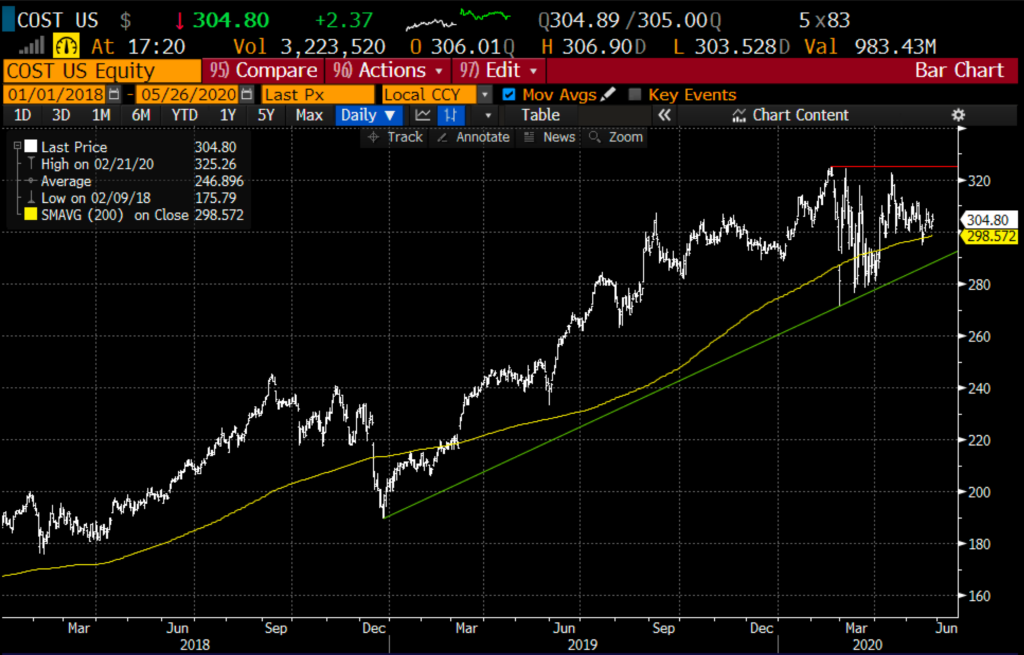 And finally, we took a look back at how to manage an overwrite from our segment on April 29th, in MSFT prior to its earnings, from the original post:

This strategy also makes a lot of sense for investors who place a good till cancel sell orders in stock they own above the markets, think of it as a way to get paid to put that order in. I wrote about this strategy last month

Yesterday as we taped the segment MSFT was trading at $178 and the June 185 call that could have been sold in late April at $4.25 was worth only $2. Now let’s be clear, MSFT has been volatile over the last month, trading above the short strike just last week, so it makes sense to keep an eye on this for those who would not want to run the risk of their long stock being called away at $185 in three weeks, but really at $189.25. If the stock were to settle in the $170s, the June 185 call should continue to decay and at some point if it was worth 50 cents or so it might make sense to cover it.