You probably know the story well by now… Moderna (MRNA) the biotech outfit just $8 million of revenues in the first quarter of this year was sporting a market cap of over $30 billion two weeks ago, with the stock trading up 340% at its recent all-time highs on May 18th on enthusiasm about early-stage trials for a coronavirus vaccine. The company which went public in December 2018 selling 26.25 million shares at $23, did a secondary offering this February selling $30.26 million shares at $19 and on the day of the all-time highs did another secondary offering of 17.6 million shares at $76. All of those share sales have resulted in $1.2 billion the company has on its balance sheet, essentially ensuring its survival. There has been a lot of criticisms of companies like this who have stepped up to race for a vaccine but have also served as a hype machine for their public equities, despite what many feels is a low probability of success for most of the attempts at finding a reliable vaccine.

Given this uncertainty and the CEO, Stephane Bancl’s routine appearances on financial TV discussing the prospects of the trials, it begs the question as to why Bancl has been selling so much of his stock along the way? The red flags indicate points in which he has sold stock over the last year, while the green flags show points in which he exercised options, for quick disposal: 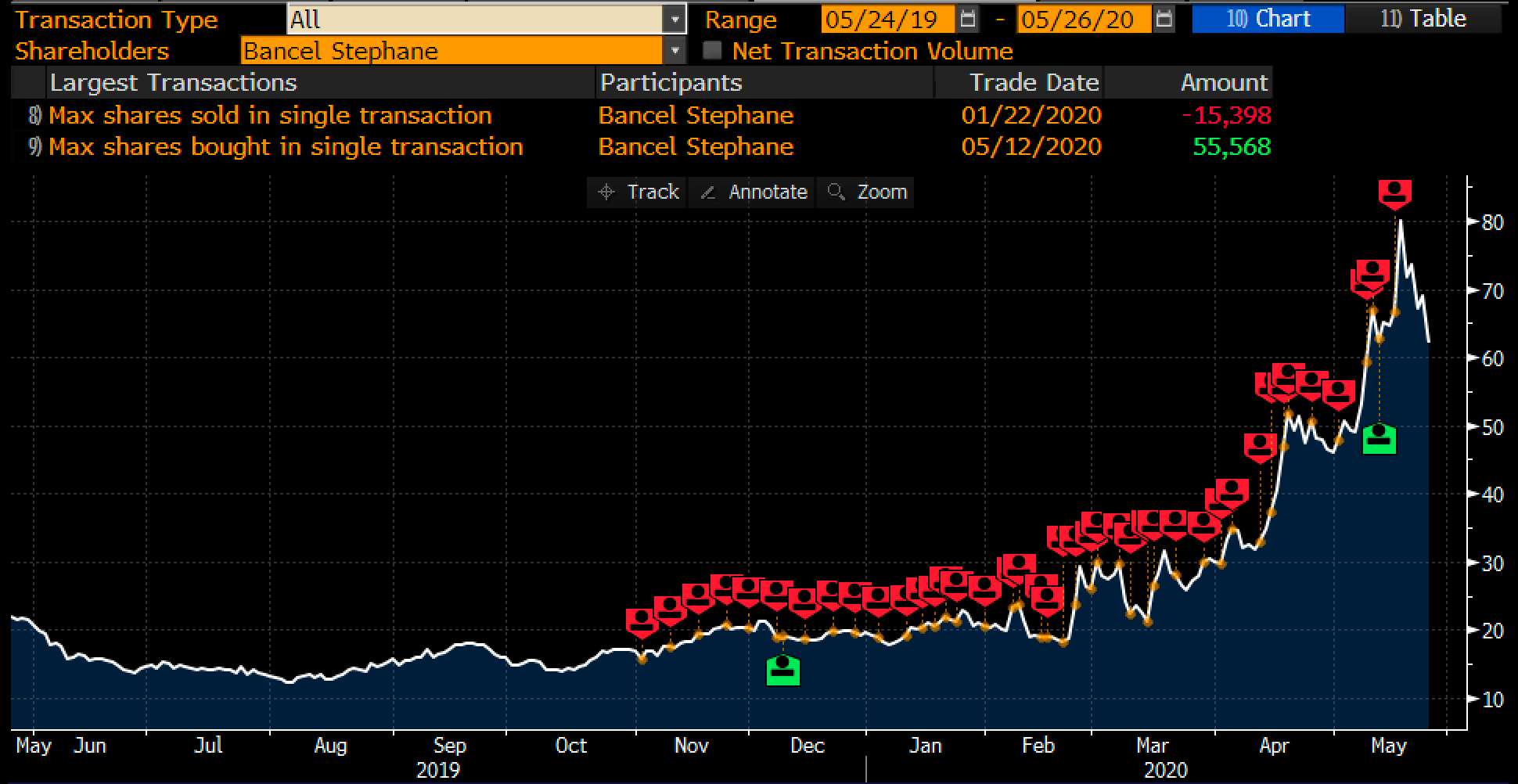 This table puts some dollar figures on the sales and exercises, they are massive: 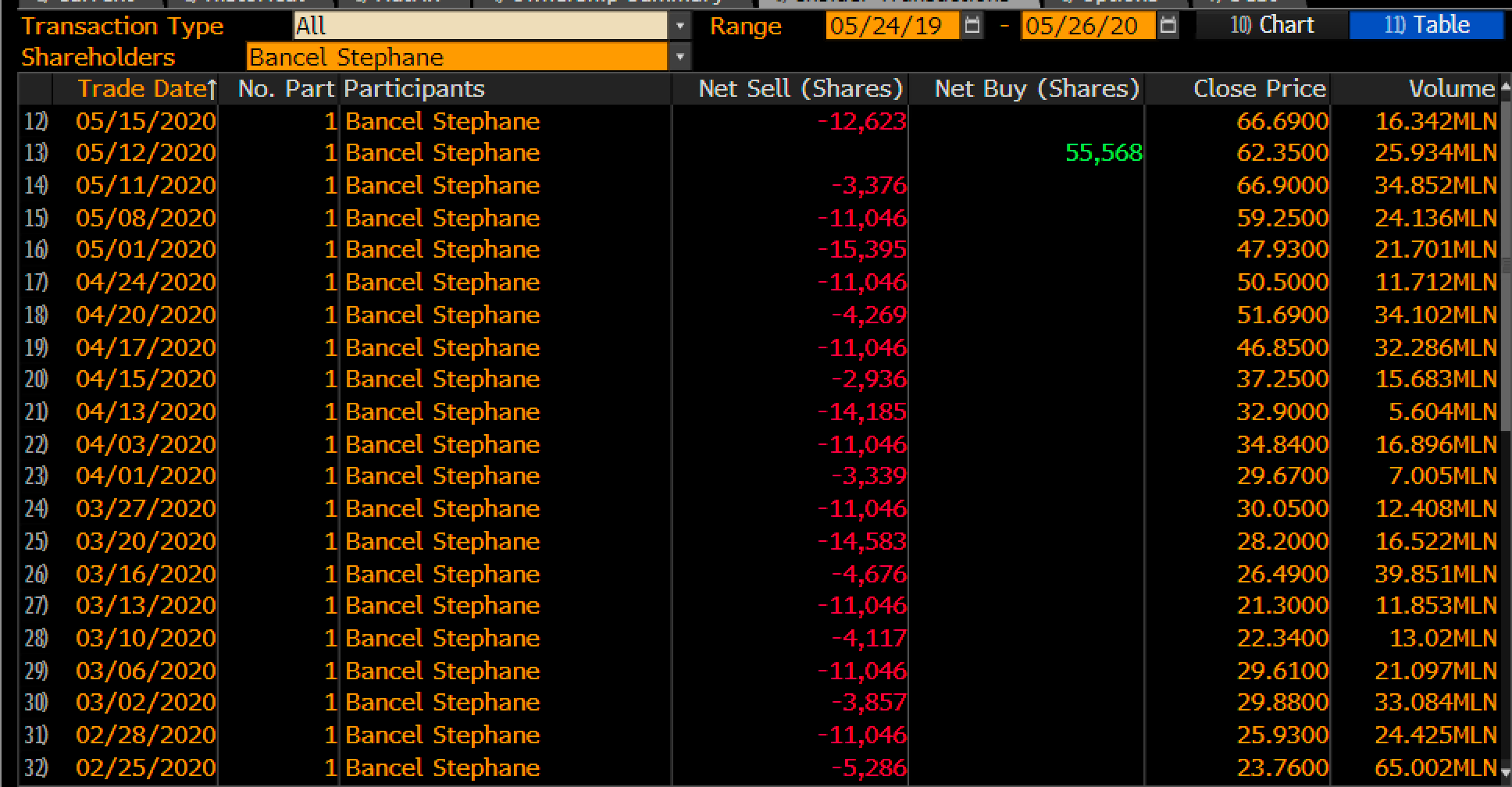 Which brings me back to the uncertainty of the trials and the probability that MRNA will even produce a vaccine in the near future. Today the stock is down 10% on a story from CNBC highlighting a hiccup in the early trial: first reported by Stat News:

Patients in clinical trials are usually faceless. But as the experimental Covid-19 vaccine being developed by Moderna Therapeutics has begun advancing through studies, it has found a much more visible advocate: trial volunteer Ian Haydon, a 29-year-old in Seattle.

Haydon has spoken about the vaccine on CNN and CNBC. He even said he’d volunteer to be exposed to the novel coronavirus, SARS-CoV-2, if researchers want to test to see if the vaccine was actually effective. But up until now he has left out a key detail: He is, apparently, one of three people in the trial who had a systemic adverse reaction to the vaccine.

Twelve hours after receiving his second dose, he developed a fever of more than 103 degrees, sought medical attention, and, after being released from an urgent care facility, fainted in his home. He recovered within a day.

I am not really into conspiracy theories, and I can see a scenario where the execs selling are doing under purely innocent reasons, the company and the execs are giving greedy investors who are looking to profit of a cure for coronavirus exactly what they want, stock in a company pursuing a cure. But the flip side is also true that the optics of the execs getting really rich off of merely the prospects, the hope of their drug actually working has really bad optics whether it works or not. I guess I could see if the CEO was saying listen, I am creating a little rainy day fund, you know so I can afford to brace the kid’s teeth and send them to college, but this is the yacht fund.

Of course, Wall Street analysts can’t help themselves with a story like this, there are 11 Buy ratings 1 Hold and no Sells, and heck how can you blame them, most of the Buys were on the IPO and help allocate shares in the Secondaries and all want to be part of any M&A that might occur from that cash hoard.

It is worth noting that it is nearly impossible to play this stock directionally with defined risk using options as the at the money straddle (the call premium +_ the put premium) looking out of a month to the June 26th weekly 62 straddle is offered at about $17, or about 27% of the stock price, that is essentially the movement in either direction the options market is pricing.

Of course if you are already long and not selling there are many ways you can take advantage of elevated options premiums, you could overwrite stock, by selling an out of the money all. For instance with the stock at $62 you could sell the June 76 call at $3.20, or about 2% of the stock price, if the stock is below $76 on June expiration then you keep the $3.20. Why chose $76, that was the price of the last secondary and should serve as useful technical resistance, a level where buyers got plugged and might look to sell.

Or if you were considering getting long after a sharp pullback you could sell puts instead of buying at current levels, For instance with the stock at $62 you could sell the June 55 put $4, if the stock is $55 or lower on June expiration you are put 100 shares per 1 put contract short. But you will have effectively bought the stock at $51 (the strike less the premium received), down 18% from current levels.

This one is a no-touch for me. It is worth considering how much of last Monday’s stock market gains (SPX was up 3%) on the supposed good news from the trial… for those looking to buy I would wait until the stock gives up 50% of its gain from its May 18th highs.