TJX Companies (TJX) reports its fiscal Q1 results tomorrow before the opening. The options market is implying about a 4% one day move, which is rich to its 2.5% average over the last four quarters.

Shares of TJX were trading at a new all-time high on Feb 26th, a week after the S&P 500 (SPX) put in its high, on better than expected Q4 results. Over the course of the next month, the stock would lose 50% of its value before bottoming with the broad market on March 23rd, and now down 16.5% on the year and 22% from its all-time highs. For the last month and half the stock has been trading in a range between the mid-$40s and the low-$50s, with very healthy technical resistance at the March breakdown level of $55: 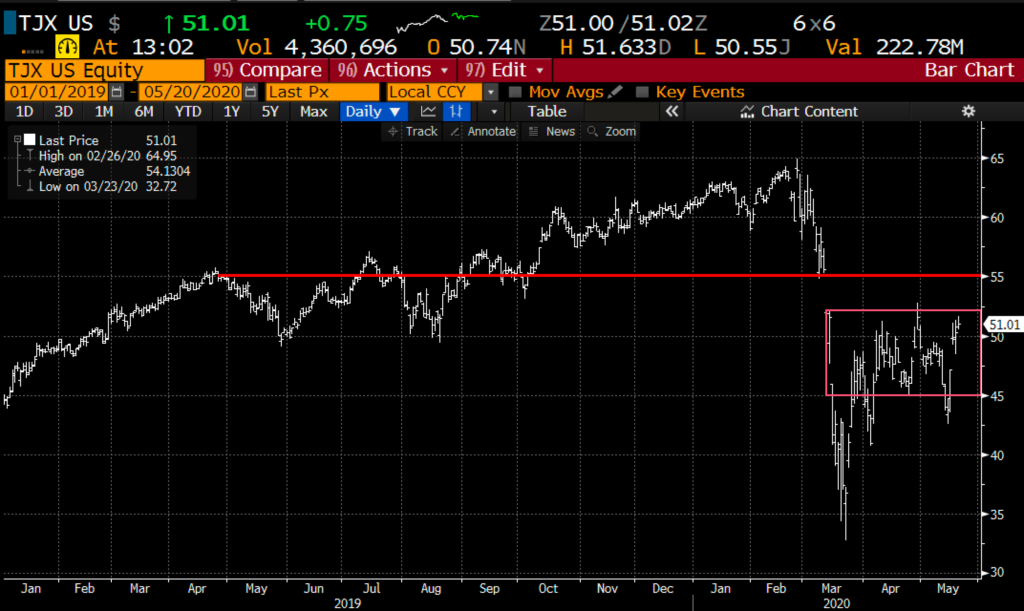 For those of you who don’t think charts matter much in trading, check out this 5-year chart highlighting how past resistance becomes support and past support resistance. The breakdown at $55, then the support in the mid $30s at the 2017 & 2016 double bottom low, and not the resistance of the prior uptrend from late-2017: 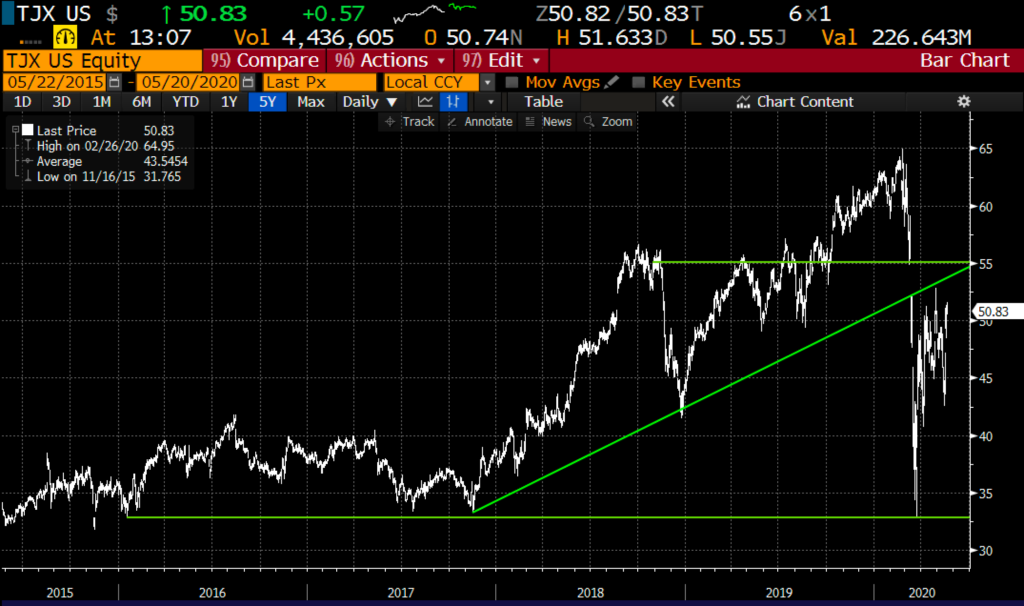 TJX was forced to close stores and layoff/furlough workers starting in March, this is known, what is unknown is what the pent up demand will look like for their goods as our economy reopens. Did they lose out on sales to online stores that can easily compete with off-price retailers like TJX? Does TJX in the near term face the challenge of shoppers not willing to sift through aisle after aisle of crammed in clothing that they may not be able to try on or return? What are the costs associated with a retailer that will need to have far fewer customers in a store with added costs of keeping the store and all of the items clean, despite less traffic? These are questions that most retailers will face, especially those for clothing that consumers will need to touch and try on.

Wall Street analysts have cut fiscal (current year) 2021 eps estimates for TJX by about 50% on an expected sales decline of 19%, while expecting eps and sales to get close to their fiscal 2020 peaks next year, which would have the stock trading at about 20x, which is basically the high-end of the last give year’s range. Forward guidance on capacity and expenses will be very important.

It is worth noting that we have seen retailers that were open, whose stocks have traded well on a relative basis like WMT, TGT, LOW & HD all trading sideways to down, with just WMT initially trading up by giving back gains after reporting this week. I would not be surprised to see TJX continue to consolidate in the current range, but even if it were to pop I suspect $55 will stand as formidable technical resistance until we get more color on how the re-opening of our economy goes and what the bricks and mortar retail environment will look like in a pre-vaccine economy.

If I were long the stock I might consider selling a short-dated out of the money call to take advantage of high elevated options premiums and the technical set-up:

If I thought the company would guide far below consensus I would look to play for a re-test of $40 in the coming weeks via a put spread in July... for instance:

The ideal scenario is that TJX is near $55 on June expiation, if below the short call will expire worthless and you will be left long the Oct 55 call for only $2.80 as opposed to the $3.90 it costs now. If the stock is at or above the 55 strike than the short call can be covered if you want to stay long the Oct 55 call. The idea of the trade idea is chip away at the longer-dated premium and set up for a rally later in the year. The max risk of this trade idea is the $2.80 in premium paid which would only occur on a near-term dramatic rally above the $55 strike or below current levels.