In Friday’s post (May She Will Stay) I had a brief mention of the administration’s increasingly aggressive rhetoric with China, despite its earlier routine praise of President Xi’s handling of China’s handling of the COVID-19:

I would also add that the consensus post-pandemic economic outlook from what I can tell does little to include the ratcheting up of tensions with China, an apparent about-face of the supposed grand trade deal made with China in January. trump’s musings regarding retaliation on China for the coronavirus, which could include more tariffs or even the unthinkable of defaulting on our debts to China could lead to a massive bilateral conflict on more than just the trade front.

It is worth noting that January’s Phase 1 Trade Deal was supposed to be a sort of victory lap for the admin’s hard-line on China over the past two years, setting the stage for a greater leveling of the playing field from at least an economic standpoint. To get to that point our country had made non-trade concessions… ignoring civil rights abuses which included the rounding up of hundreds of thousands (possibly millions) of ethnic Muslims and relocating them for “re-education” and placing them in labor programs, and of course Bejing’s heavy hand in suppressing the massive pro-democracy protests in Hong Kong. And all of the pain that U.S. Farmers and manufacturers took during the admin’s trade war with China in 2018 and 2019… was all for naught in the shadow of the growing tensions with China over the origins, possible coverup, the potential that it was man-made in a lab in Wuhan (which has been debunked) and spread of the coronavirus from China. An argument could be made that the disruption of the trade war has acted as a recessionary accelerant now, having already weakened large swaths of our domestic economy, disrupting our important supply chains and causing the Chinese consumer (1.3 billion strong nearing $6 trillion in consumer spending in 2019) to become far more nationalistic.

One of the first official pieces of business the trump admin conducted in Jan 2017 was pulling out of the Trans-Pacific Partnership (TPP) an effort spearheaded by the Obama administration, signed by 11 Asian countries in an effort to counter Chinese influence in the region. By doing this the admin made it clear they would be on a bilateral collision course with the Chinese, and sending an equally stark America First message to our allies in the region. That was, of course, the new admin’s right, to the victors go the spoils but I also think that it is safe to say that U.S. Chinese bilateral relationship is as bad as it has been in two decades at one of the most critical times in modern history. Of course, this is NOT all the fault of the trump admin. I think it is safe to say that a hardline on China is easily a bi-partisan issue here in the U.S., but the flaring up of tensions during a pandemic, for political reasons during an election year will not ease the blow of the uncertainty of the recession we are in, and can only deepen and lengthen it, as the Chinese will not likely bow to the will of what might be the last months of a U.S. president.

trump was obviously hoping to pin his re-election on the strong U.S. economy, that is out the window for 2020. So he needs a scapegoat. Aside from a unique asterisk that will forever be next to his name in the history books, he will also hold some of the starkest economic records for any U.S. president in a century, and these are not the sort of records that will be hanging on banners in his gilded presidential library that is not likely to actually have any books in it.

For those who think this is purely political commentary, I assure the most important bits are not (the prior comment definitely was ;-). But increasingly divisive talk of retaliatory actions now could have profound economic and health impacts (not to mention militarily) between now and the end of the year as we try to reopen our economy, putting our citizens back to work and having end-markets to sell our goods and services to outside of the U.S., as we attempt to procure PPE equipment for our frontline workers in advance of a second wave of the virus, secure much-needed ingredients to coronavirus therapeutics and vaccines which can help keep our economy open and our citizens are safe to avoid rolling shutdowns which could plunge the economy into a depression. We are at a critical time for the future of our nation, the actions taken now will have profound near and long-term impacts.

The virus and the actions of our leaders both here and abroad will most definitely be used for political purposes for years to come, but it is important to remember, that China is an authoritarian government skilled in propaganda, the majority of their people will believe what the government tells them, and if they tell them to not BUY AMERICAN this would have a dramatic impact for U.S. multinationals like Apple, Nike, Starbucks, McDonald’s… oh and Tesla to name a few. On the flipside, and trump might have been right about this, our manufacturing and our consumers are most definitely reliant on China, and in the near-term, we do not have that luxury to accelerate de-globalization as it will come at a massive cost to U.S. corporations to reorient their supply chains and manufacturing back to the U.S. and re-skill workers for these jobs given their current financial predicament.

Too hard a line on China for purely political purposes is not likely to end up the way he thinks it will if it comes at the cost of American jobs and consumer spending power, as was the case into the 2018 mid-terms, where the trade-war was a weight on the economy, helping to ignite a stock market sell-off in Q4 while the scapegoating of immigrant caravans backfired alienating voters.

As most headlines in the current political environment, it is not hard to create memes, and the balance of these two headlines will be a determining factor on how we dig out of unforeseen global health and economic crisis: 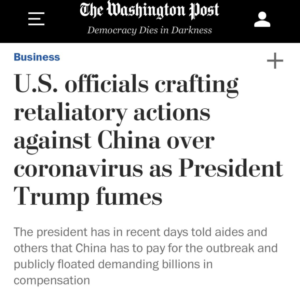 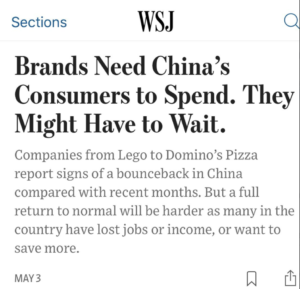