Today after the bell Amazon (AMZN) will report their Q1 earnings, the options market is implying about a 6.5% one day move tomorrow, which is double the average of 3.25% over the last four quarters. With the stock at $2425 the May 1st 2425 straddle (the call premium + the put premium) is offered at about $158, if you bought that, and thus the one day implied move you would need a rally above $2583, or a decline below $2267 to make money by tomorrow’s close.

Last week in a post (here) I discussed AMZN’s extraordinary price action of late, its technical set up and the strengths of its business model in the current economic environment:

Near the lows of the stock market in late March, the price action and technical set up in Amazon (AMZN) struck me as unique given the negative sentiment in the market coupled with the clear advantages of AMZN’s business model given the new rules of the pandemic economy:

$AMZN is one of the most constructive looking charts in the stock market, that uptrend is your stop. pic.twitter.com/9bgNh7o3Ls

Not only did AMZN hold that up trendline, but the stock exploded through upside resistance, is now up 30% on the year, and up nearly 50% from the March lows: 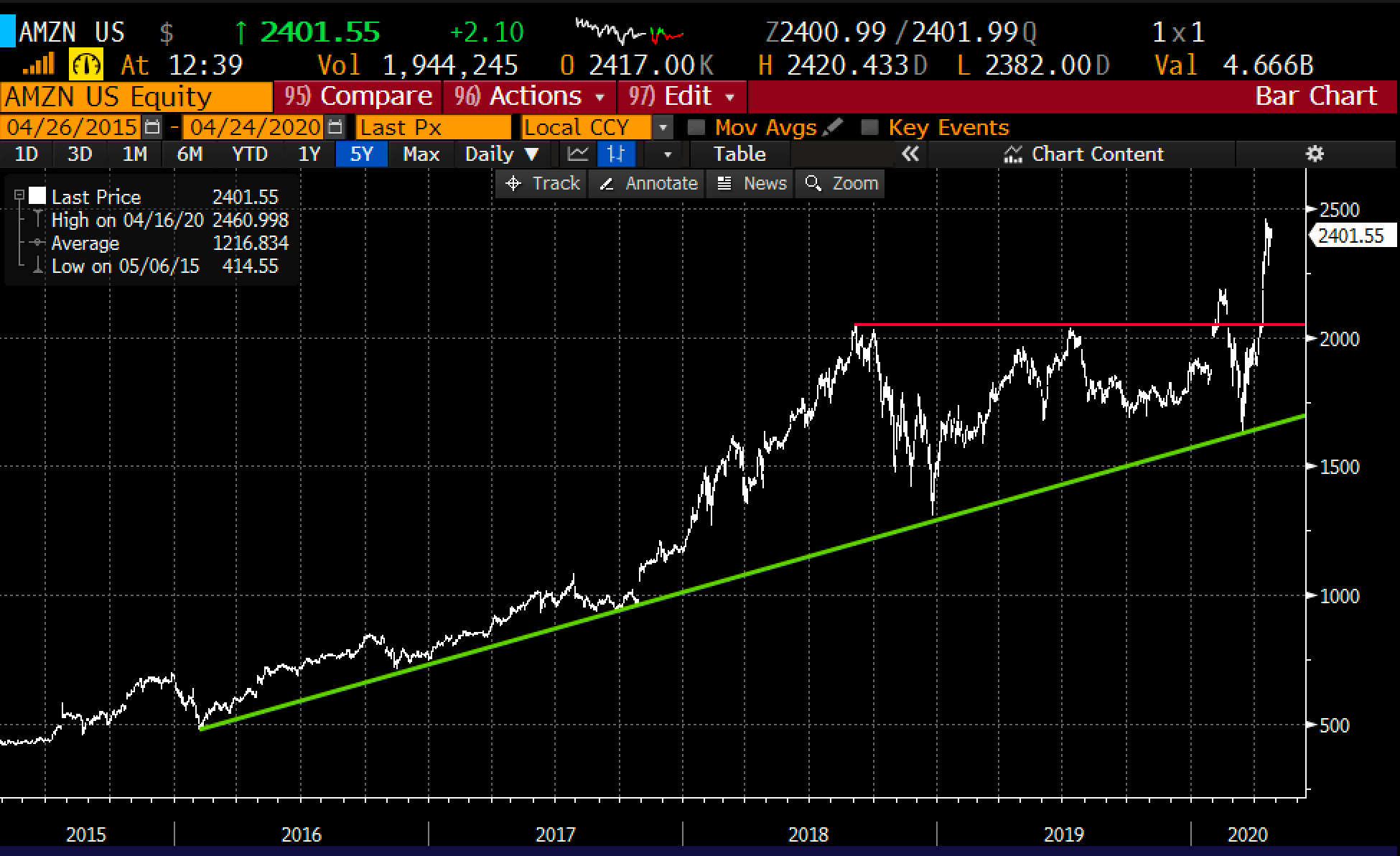 Earlier this week prolific investor and entrepreneur Mark Cuban was on Fast Money, who has been a long time shareholder and steadfast bull on AMZN, I asked him whether he thought the recent sentiment causing the stock’s strength will abate once the economy gets back to a more normal state? His answer was NO, basically that the consumer trends that were already in place pre-pandemic have only been accelerated in the current environment, and will only play to AMZN’s strengths in a post-pandemic world, watch below:

It is nearly impossible to argue with Mark’s view on the company, and when you layer in their deep investments in warehouses, logistics, third party selling facilitation, Prime, on-demand video and music and then of course AWS and you might have thought that CEO Jeff Bezos took a hard listen to is Seatle neighbor, Microsoft Bill Gate’s prescient 2015 warning of our ill-preparedness for a pandemic, and he continued to build his company for a post-retail, work/learn/play from homeworld. Mark thinks AMZN is “going up, up, up”, but I think it is safe to say that he means that over time. A pul-back to the breakout level between 2000 and 2200 would be a great spot to for those who agree with Mark and that prior technical resistance should serve as very healthy technical support.

The investment world is in universal agreement, AMZN was the stock to own before, during, and post-pandemic. It seems nearly impossible to pick any holes in the story, as long as you don’t care about such mundane things as valuation, which many of the bulls on the stock see an EV/Ebitda multiple in the low 20s as quite attractive despite being well above AAPL and GOOGL in the mid to low teens.

What to expect? RBC Capital’s star internet analyst Mark Mahaney (who rates the stock a Buy with only a $2600 price target suggested in a note to clients:

Based on intra-quarter datapoints and our analysis, we believe AMZN will likely print Beat & Bracket or Beat & Raise Q1 results. Industry datapoints clearly suggest that eCommerce has seen a surge in demand during the COVID crisis. We also believe AWS has experienced a surge in usage. Per our LCap preview, we view AMZN as belonging in the Rocket Ship basket, in terms of ’19-’21 fundamentals.

and highlights key points to look for:

Amazon Will Report Q1 Results on April 30 th : For Q1, we expect $73.0B in Revenue, $4.19B in GAAP Operating Income (OI) and $6.33 in GAAP EPS. Our Revenue estimate is a tad above consensus and at the high end of management’s guidance, primarily due to material strength in eCommerce demand and the surge in usage of Cloud Computing services. In terms of the June quarter outlook, we view the Street’s Revenue assumption (5% Q/Q) as reasonable, with the Street’s GAAP Operating Income estimate of $3.9B (5.1% margin) as bracketable. All that said, we note that we are entering an increasingly uncertain macro environment and there could be potential second order recessionary headwinds on Amazon’s Retail, AWS and other businesses in H2 and into 2021.

Key Items to Focus On: 1) Gross Margin Trends: We estimate Q1 Gross Margin of 42.4%, down 80bps Y/Y, primarily due to increased costs associated with accelerating demand for consumer staples/grocery items and One Day (pre-COVID for One Day). 2) Overall Operating Margin Trends: We are modeling a 5.7% GAAP Operating Margin in Q1, down 170 bps Y/Y, also due to higher fulfillment and shipping costs from the surge in deliveries AMZN is likely facing and scaling the One Day initiative (pre- COVID). 3) Key AWS Results: For Q1, we are looking for AWS Revenue of $10.4B, growing 35% Y/Y (a 1 pt acceleration vs. Q4), and AWS GAAP Operating Profit of $2.7B (a 26% Margin – flattish Q/Q). Third-party data- points suggest a material rise in demand and usage of Cloud services in COVID-related WFH environment across the globe and we have not seen any interruptions or outages at AWS thus far. This could be a showcase event for the durability of AWS, in our view. 4) Key North America Retail Results: We estimate NA Retail Revenue of $43.8B, up 22% Y/Y and NA Retail GAAP Operating Profit of $1.6B (a 3.6% Margin). & 5) Key International Retail Results: We estimate Int’l Retail Revenue of $18.8B, up 16% Y/Y ex-FX, and an International Retail Segment Loss of $100MM.

My take into the print: It is hard to argue with any of the bulls who have been riding this rocketship, they have been right, and the pandemic just accelerated many of the trends that AMZN has been investing in, suppressing profitability. But make no mistake, expectations are high heading into the print, and a quick look a the chart since the start of 2018 you see two things… first and epic breakout of a long base that has a series of higher highs and higher lows, but on the flipside an RSI (relative strength index on the bottom panel) that is getting fairly hot. From purely a technical standpoint, as my Fast Money pal Guy Adami has repeated on the show a few times of late, he could easily see the stock pulling back post-earnings to the breakout level near 2170-2200 and reloading on the long side there… 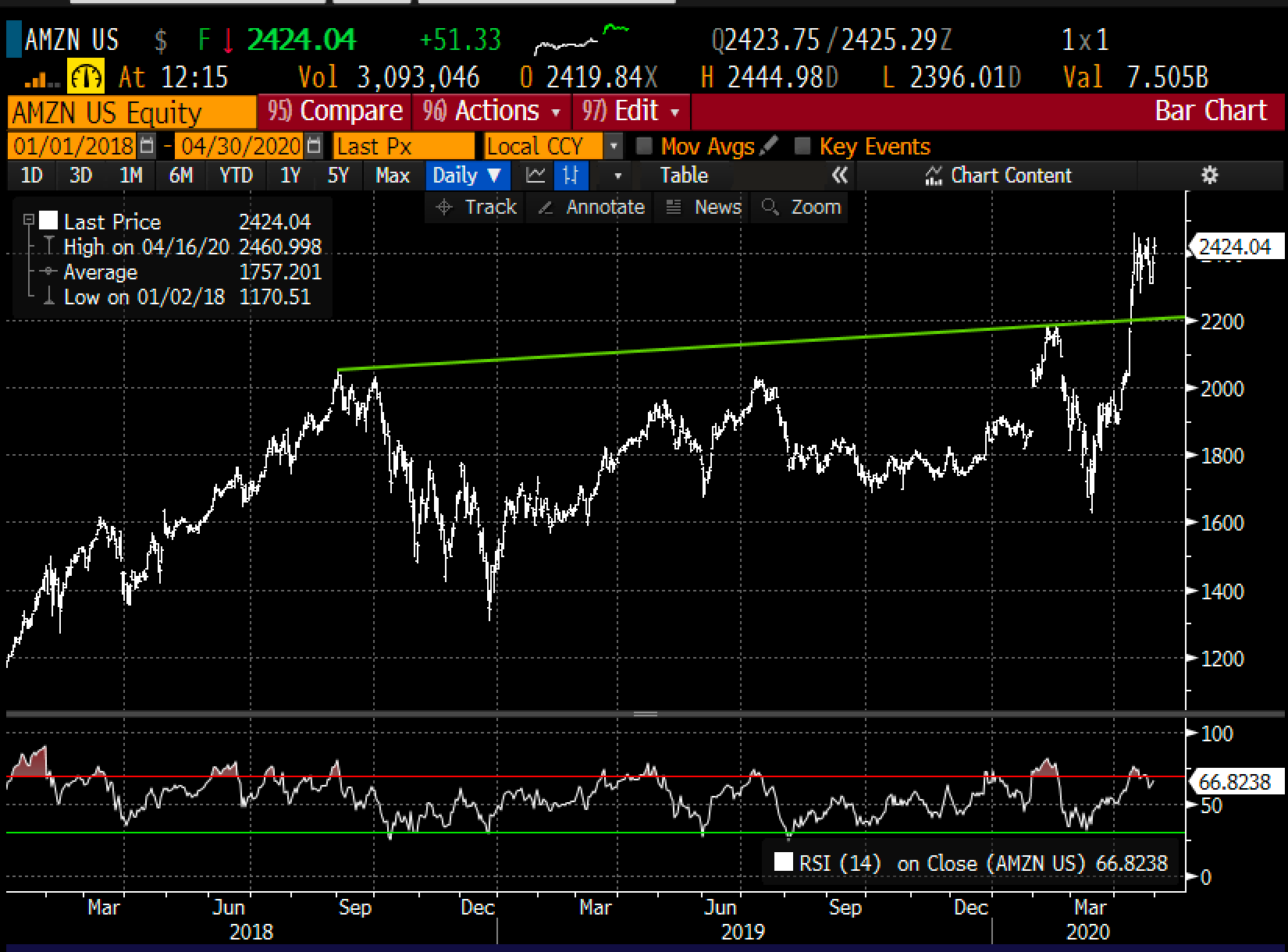 So what’s the trade? Short-dated options prices remain extremely elevated, with 30-day at the money implied volatility at 47% which is in stark contrast to MSFT and AAPL who’s stocks have also risen sharply off the lows and outperform the broad market, but have seen their options prices come down dramatically of late: 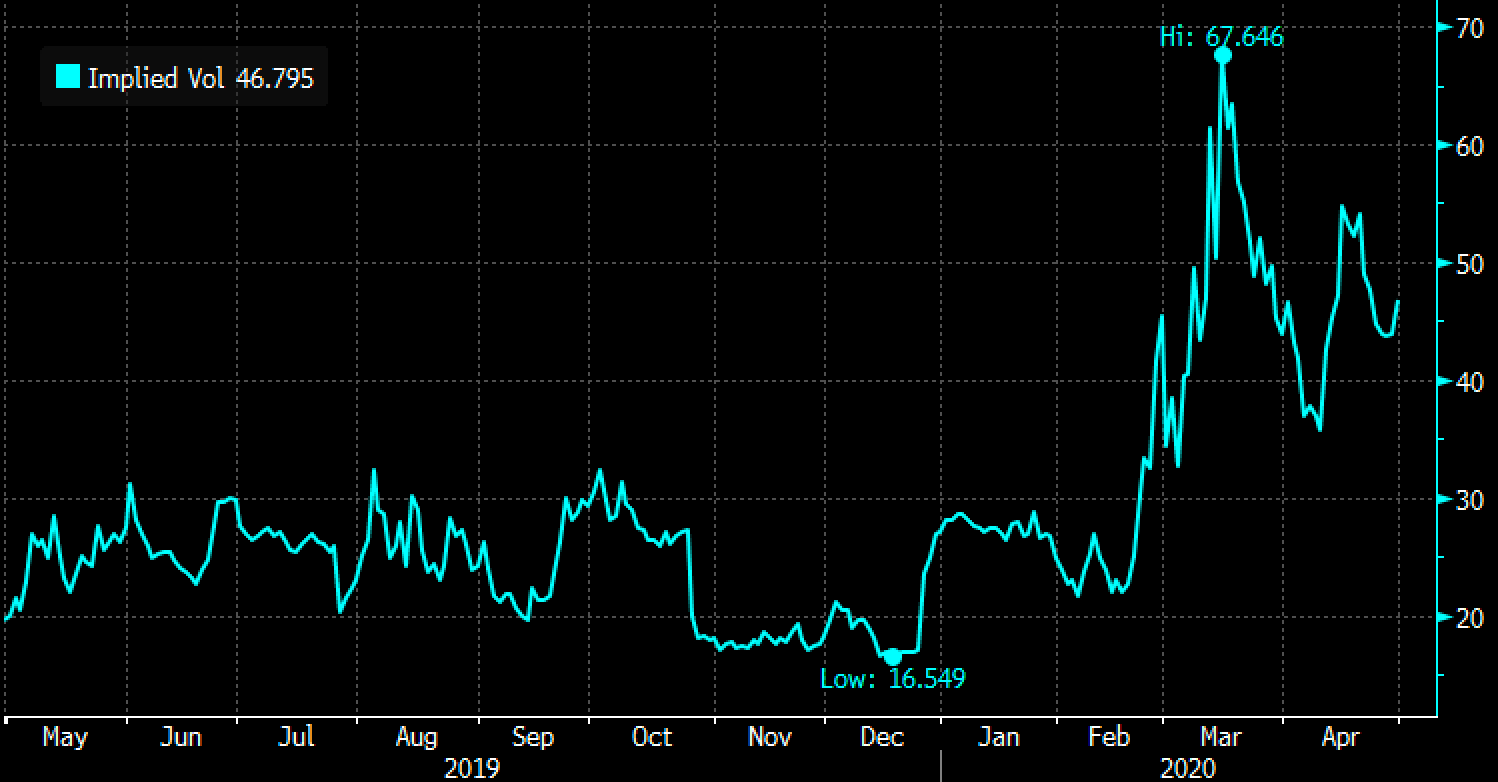 AMZN seems like the perfect set-up to wait and see what they have to say, guide too and what the stocks does… I could see the initial response to a strong quarter and guidance as a gap and fade. On a guide lower I could see the stock on its way back to 2200.