Last Monday IBM reported their Q1 earnings and after initial investor disappointment with the results and outlook (or lack thereof) shares of the stock have risen 10% in the last week: 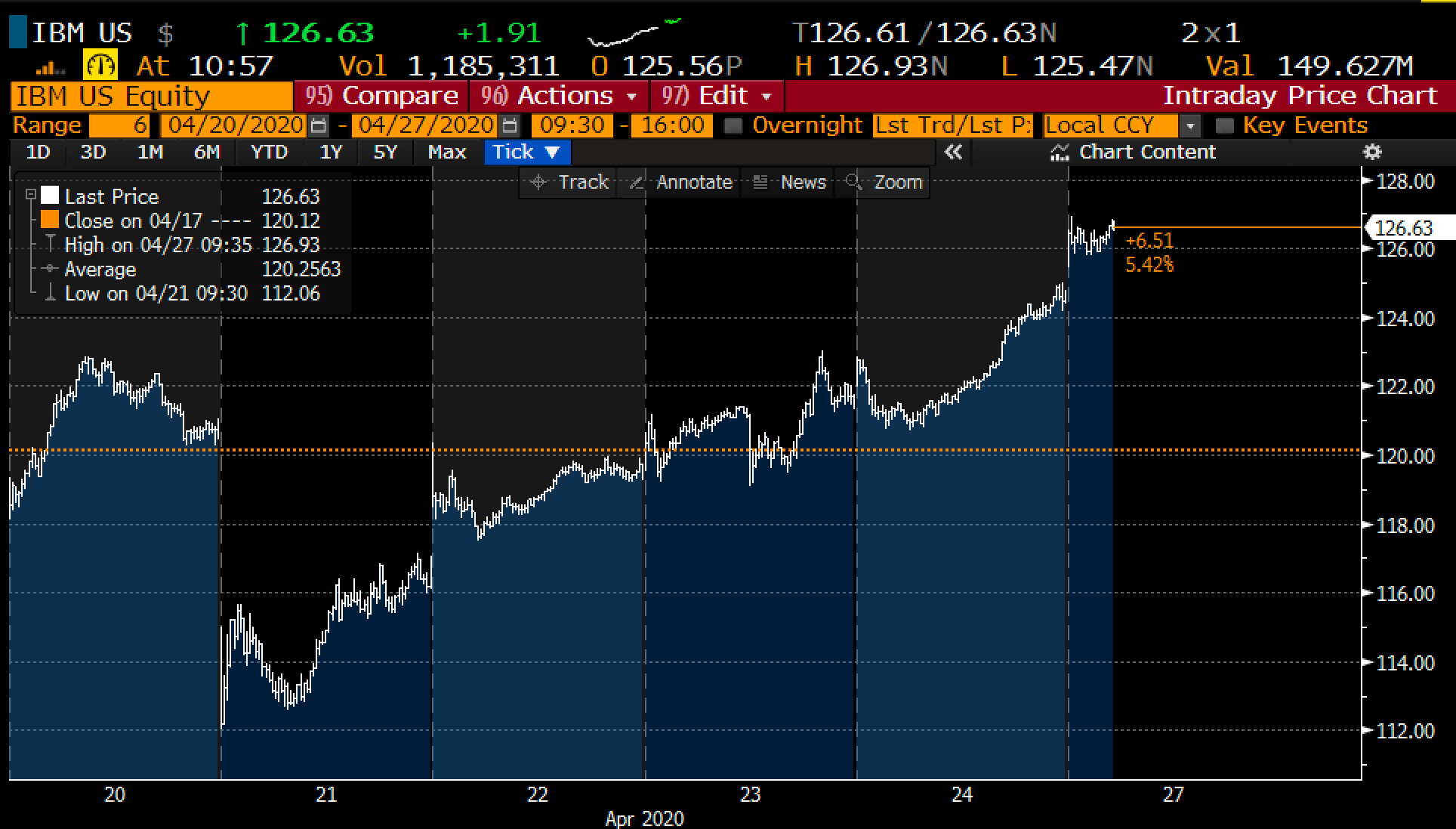 The stock is now back to its breakdown level from early March that saw the stock plunged 28% to its March lows after it had already dropped 20% from its January highs… the stock is at an important technical resistance level: 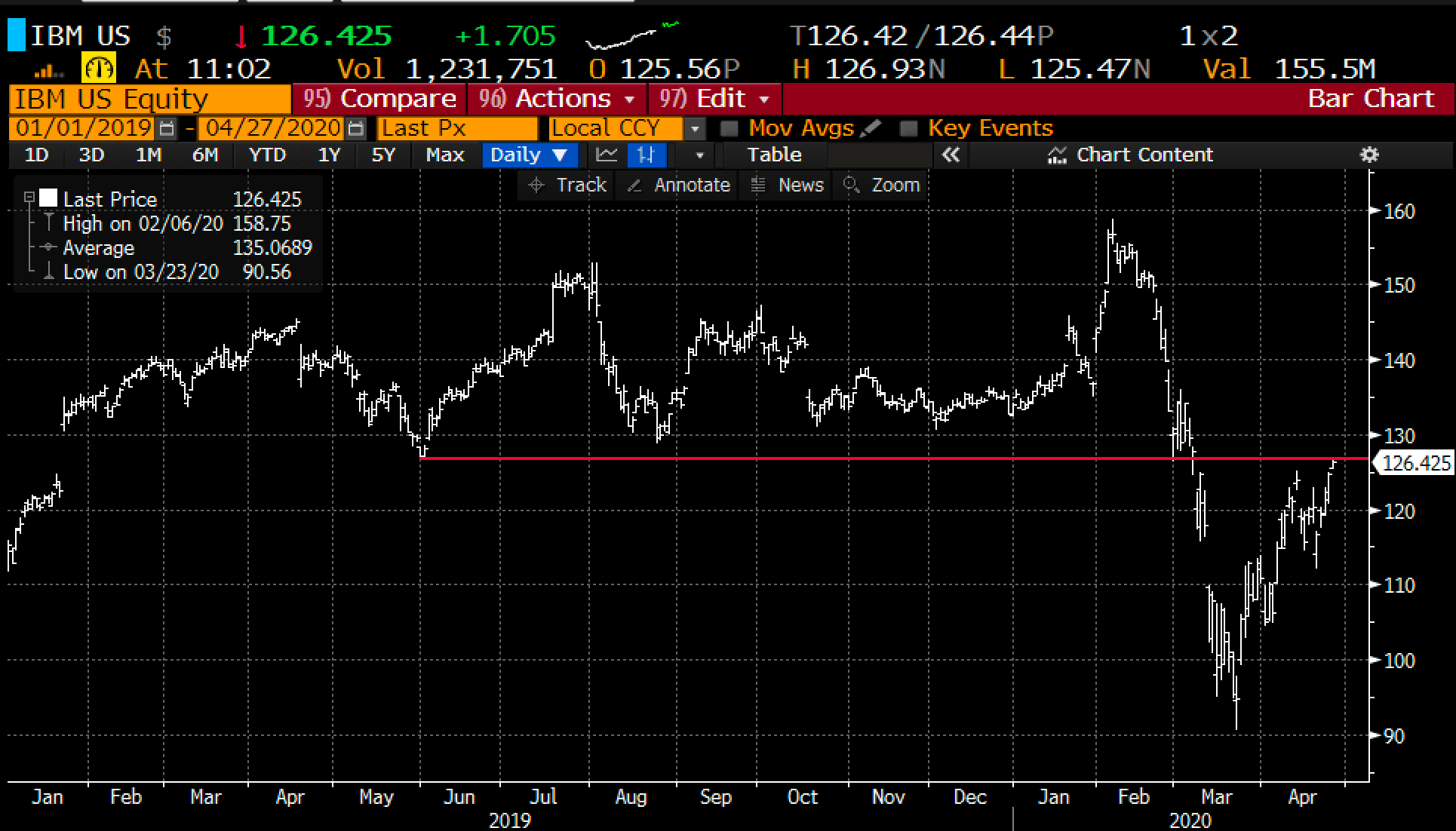 The stock’s 40% rise from the March lows has caused short-dated options prices to come in hard as one would expect, making long term directional strategies look attractive:

I wanted to quickly highlight a couple of comments on IBM from two very different investors who I respect very much, both having to do with the stock’s valuation, which seems like the only reason bulls might wade into big blue’s waters. First from Jim Chanos, of Hedge Fund firm Kynikos Associates in an email to me:

While everyone focused on the new IBM CEO, I am gobsmacked by just how fast IBM’s business is deteriorating, post-Red Hat acquisition. Specifically, IBM actually lost money(!) this quarter, on a pre-tax basis, and their LTM operating income dropped to only $8.3B, despite the $30B Red Hat deal. What’s really interesting is that if you combine IBM’s operating and IP income for the LTM, and tax it at 21%, one gets $6.80 in recurring EPS! And that number will fall further as we look forward to 2021. The Market has long recognized IBM as a declining business…that was cheap. In reality, it is declining faster, and is decidedly NOT cheap.  The Street is at $12.50 for 2021E EPS at IBM. It could be closer to $2.50!

And then this comment about how the company has been able to manufacture earnings as a result of buying back more stock in the last 20 years then the company’s current market cap:

For the morons who defend buybacks, consider this:

IBM bought back $140 billion of stock over last 20 years

How is this winning, again?

The stock is a classic value trap, but those usually only work in bull markets where investors are buying everything.

It is also worth noting that the Wall Street research analyst community, known to chase price, did not bite after this quarter, I guess they are more in tune with Jim and Chamath’s collective arguments as their average 12-month price targets are very near where the stock is trading and in the last week none of the 13 Hold and 2 Sell ratings looked to join the mere 6 Buy ratings:

So what’s the trade? For those inclined to think that IBM’s recent strength, especially the last 10% in the last week makes little sense and could see the stock retesting $110-$105 in the coming weeks, consider put spreads in June:

Or if you were looking for a bearish trade idea, but looking to take advantage of short-dated options premiums that are still elevated and looking to leg into a bearish trade that might capture their next earnings event then consider put calendars:

The ideal scenario is that IBM is near $120 on May expiation, if above the short put, it will expire worthless and you will be left long the July 120 put for only $4 as opposed to the $6 it costs now. If the stock is at or below 120 strike than the short put can be covered if you want to stay long the July 120 put. The goal of the trade structure is chip away at the longer-dated premium and set up for a decline in June or July. IN a little more than two weeks if the stock is at or above $120 then it will make sense to consider turning the calendar into a vertical put spread by selling a lower strike put in July, further reducing the premium at risk.

Calendar make sense if you are not convicted that the stock will drop quickly before May expiration. If you thought that then you would merely buy a near the money put or put spread as detailed above.