Yesterday I Tweeted the following regarding the divergence in mega-cap tech, specifically MAGA (MSFT, AAPL, GOOGL & AMZN) and the XLF, the etf that tracks the bank stocks

The Bifurcation of MAGA (MSFT, AAPL, GOOGL, AMZN) from the XLF (JPM, BAC, C, WFC) over the past week is saying the same thing to me about the rally in the SPX…This aggression will not stand… man!! Abide pic.twitter.com/XVAYbyfyrU

I was flattered that my friend Scott Wapner the host of CNBC’s Halftime Report opened his show up yesterday debating that question:

I think the way Scott framed the conversation was correct, MAGA is representing Wall Street, the inherent benefits that these companies with their monopolies, moats, balance sheets, etc have in this new pandemic economy vs the Banks price action representing Main Street, and their exposure to the most troubled parts of our economy.

Well, another day, and another divergence…The S&P 500 (SPX) was trading up more than 3% last night after some promising data was presented on Gilead’s (GILD) coronavirus treatment drug remdesivir. This is truly great news is effective, as there are others in the hopper by many other drug companies, while others are working on antibody tests and of course a vaccine. I find it pure hopium that the stock market would have that initial reaction for a therapeutics drug given the very low level of testing we have had in our country, less than 1% of the population. The SPX has since give back more than half of those initial gains.

As for MAGA, On the heels of Goldman Sach’s downgrade of Apple (AAPL) today which is down ~3%, and Amazon.com (AMZN) down nearly 3%, consolidation some of its extraordinary gains of late, causing the Nasdaq to underperform the S&P 500 (SPX) for a change, up 30 bps vs 160 bps as I write. The SPX’s gains are being aided by a rip in the XLF, up 4.25% on the day, but also a massive divergence in energy socks, measured by the etf XLE (which Exxon (XOM) and Chevron (CVX) make up nearly 50% of its weigh) which is up nearly 9% on the day vs Crude Oil which is down 8% making fresh new lows.

While the daily intra-day moves have moderated over the last few weeks as the market has rallied 30% from its March 23rd lows, the volatility by sector and on a single stock basis continues and as we get into the meat of earnings season in the next couple weeks I expect that to continue.

Chamath’s comment about this tweet caught my eye today, speaking to the concentration of MAGA in the entire market.

Whenever you get so much value concentrated in so few companies, it means the markets think they are monopolies. It usually puts a huge target on their backs.

What’s clear (and has been discussed on this site for nearly two years) is that MAGA (and its growing concentration in the market) has caused a narrowing in breadth of the market, highlighted by this comment today by noted bear, David Rosenberg:

The way I see it, the Fed and the feds have done everything in their power to juice up “animal spirits”, and here we are with the “dead cat bounce” still leaving the median S&P 500 stock down 20% from the peak and the equal-weighted index off 24%. This cup is half-empty!

So I’ll leave you for the week with a sentiment I have echoed on numerous occasions over the last couple months… the stock market has been the wrong lens to view the health crisis brought on by the virus. It also seems incomprehensible that the virus mitigation efforts of the last two months does not morph into one of the worst economic shocks we have seen in decades, likely to result in the deepest and longest recession since the Great Depression. I know, I know, just like the unprecedented nature of the crises, the monetary and fiscal stimulus that has been thrown at it, and will continue to be is also unprecedented. But this is the third bailout of capitalism in 20-year by the Fed and our Treasury, and I worry it is straining the very fiber of our financial and societal institutions and having a decreasing impact for the overwhelming majority of our citizenry. And again the propped and inflated stock market is NOT the economy, despite the Fed, and the President often confusing the importance of not letting the stock market reset.

But when I see simple charts like this from Axios last night on the un-thinkable rise in unemployment in just the last month, I am hard-pressed not to think how we should be preparing for the worst, and hoping for the best… That saving the stock market is the least of concerns, avoiding a DEEP recession, first helping our most vulnerable citizens, middle-class and small businesses should be the number one priority of our leaders… the stock market where 80% of it is owned by less than 20% of our citizens can come later. 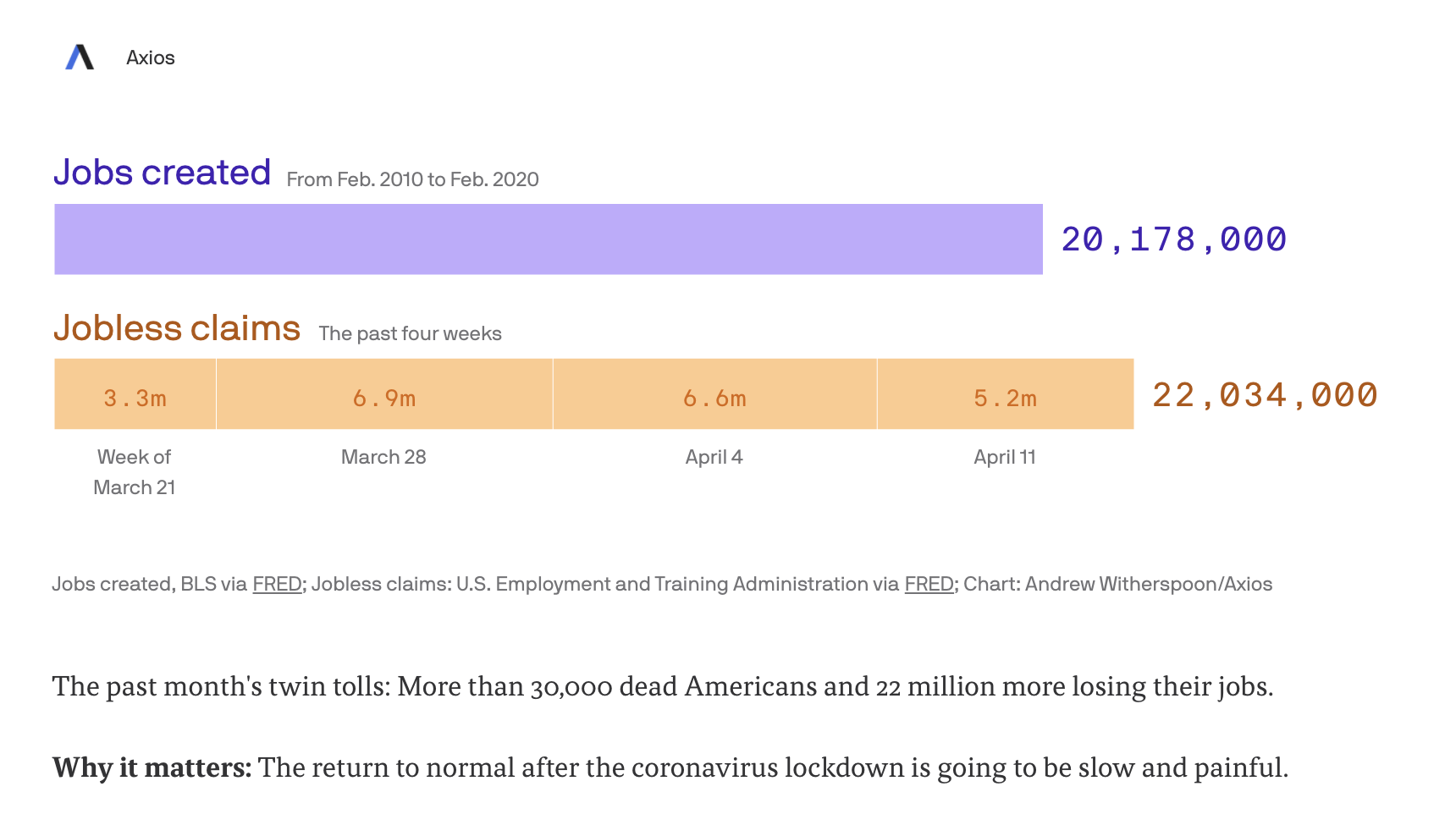 I am hopeful that the brightest minds and our leaders that believe in science are racing towards mass testing, treatments, cures of the virus. Hopefully, they come sooner than most think. I am hopeful the economy can reopen sooner than our health experts think is prudent to avoid further outbreaks before we have treatments and cures. I am hopeful that the damage to the economy is not nearly as bad as many fear, and that our country, and the world for that matter does not feel the after-shocks of this unforeseen health crisis. But hope is not a strategy, it is an emotion.

I’ll leave you with this downbeat thread from the other night… those fixated on the ups and downs of the stock market right now given the severity of the health and economic problems we face are putting the cart before the horse in my opinion, and If I am wrong…no harm no foul

Marko’s brilliant, but to be right that U.S. economy is back @ high-water mark in 2nd half of 2021 & SPX back @ Feb highs @ 3400 in 1st half of 2021 that would mean the pandemic induced recession will not have a lasting negative impact on consumer & corporate spending. No Chance https://t.co/Cs8EwQoafu 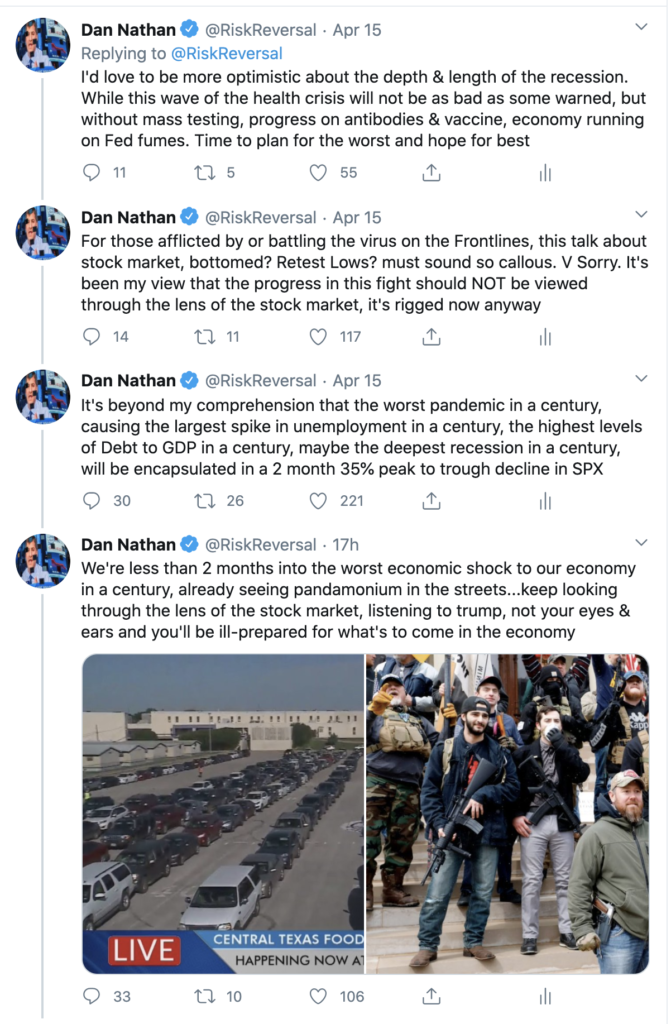