AAPL is leading the way today on reports that they are seeing a rebound in iPhone sales in China, per Bloomberg: 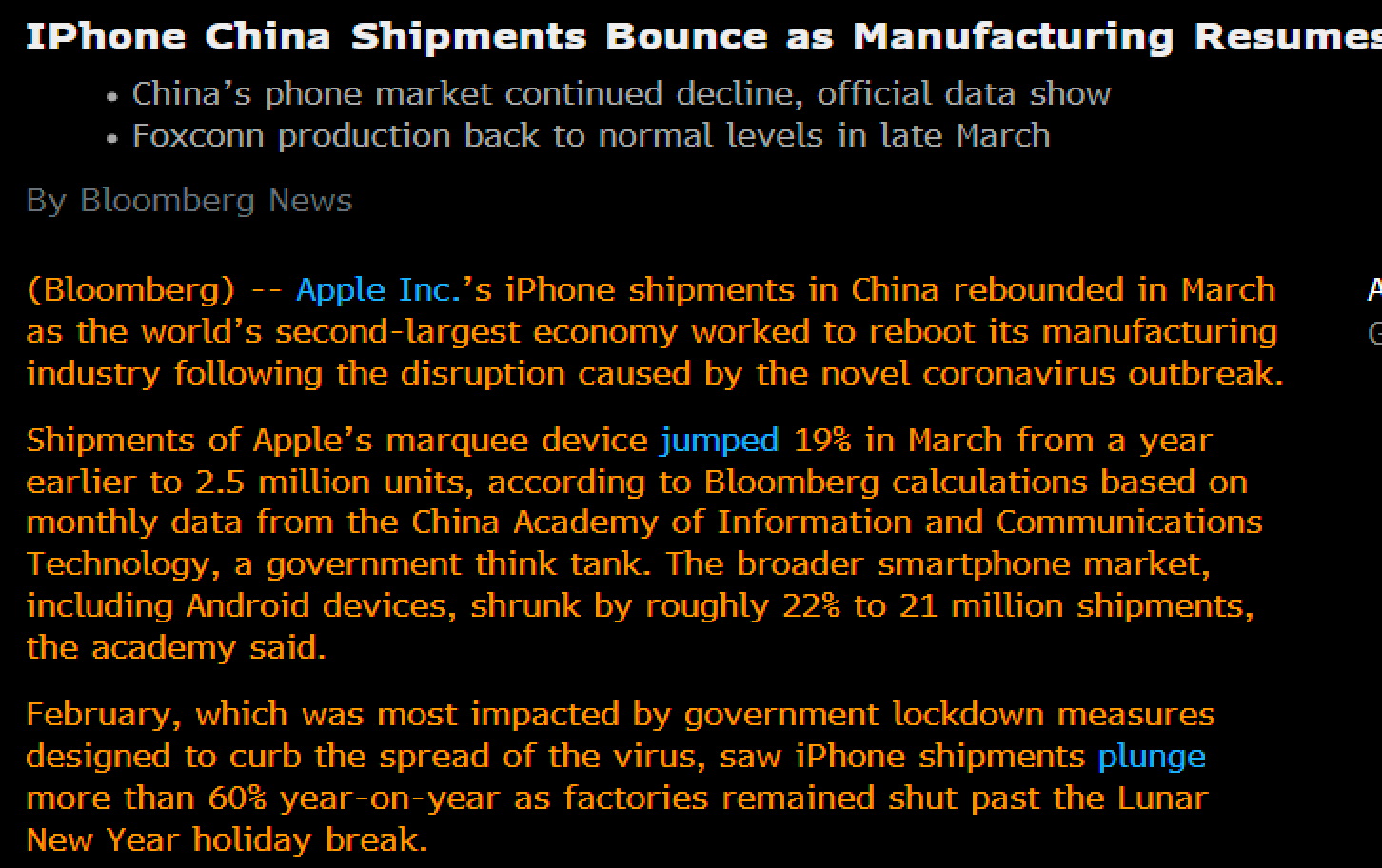 Investors are piling back into perceived safety, the safety of monopoly, of balance sheet and parts of tech where they expect some pent up demand when the global lockdowns subside.  It is hard to argue with that strategy as it seems investors are voting with their wallets, electing to look past what will certainly be a massive earnings hole in 2020 coupled with the first economic recession in 12 years.  They say the stock market is a discounting mechanism, well it seems to be discounting a whole heck of a lot at the moment. While the news on the potential apex of the coronavirus in the U.S. is certainly welcome, it is nearly impossible to quantify the lasting damage to the economy, and how long it will take the financial assistance and stimulus to stave off a deep recession or even a depression.

Earlier today a friend who is a banker, not a daily stock market participant asked me if I wanted to readjust my call from last week that the stock market would retest the March 23rd lows near 2200, here was my answer:

I do…I want to be more optimistic, but I think the stock market is the wrong lens to be viewing this health and economic crisis… the idea that the worst health crisis in a century, the sharpest and quickest stock market decline in a century, and the largest jump in unemployment since the great depression, leading to likely the deepest recession in a couple of decades will somehow be encapsulated in a 35% peak to trough decline in the SPX does not seem right after living and trading through the last two bear markets and recessions.

I know I know, the Fed, the fiscal stimulus, but at some point, the Fed can’t just print their way out of this (see Japan for last 30 years)

The lasting impact on corporate balance sheets, the Fed’s balance sheet along with a would will most likely be a dramatic change in consumer behavior which will lead to a deleveraging…. does not make think the economy will V reverse and that the stock market has already anticipated it..there is a great chart from JPM in a post I wrote yesterday  (Consensus…Clear as Mud)

I could be very wrong… it is worth noting that it took the SPX 6 months to make a new high after dropping 20% in Q4 2018, we are now less than 8% from 3000 in the SPX which was the breakout level in Oct, which was entirely the result of Fed-induced liquidity imo, a year that saw the SPX rise 30% despite no eps growth, that was supposed to come this year… so how long do we prop up equities in a year where eps are going to be done significantly with little visibility for 2021??

I think we can all agree that tech will lead the way higher in the next secular bull market, the relative outperformance by some of the behemoths has been evident to me for weeks (since the lows):

$AMZN is one of the most constructive looking charts in the stock market, that uptrend is your stop. pic.twitter.com/9bgNh7o3Ls

On Thursday we just might get a good read on what second quarter (maybe even second half 2020) demand looks like for one of the most cyclical parts of tech, Semiconductors, when Taiwan Semiconductor (TSM) reports their Q1 results. TSM is an important read as AAPL is nearly a 20% customer of theirs Hauewi nearly 10%, AVGO, TXN, NVDA, QCOM, and AMD all between 3% and 5% customers.

Near 12%, TSM is the largest weighted stock in the SMH, the etf that tracks the semi space, the stock led on the way down, topping out in January as opposed to the SMH topping in Feb, but TSM only had a 30% peak to trough decline vs the SMH’s 38%, but TSM has lagged a bit on the way back up, still down 17% from its all-time highs vs the SMH only down 14% from its highs.

Despite short-dated options prices still very elevated from 3 month ago levels, the weekly at the money options look dollar cheap to me. For instance, with TSM at $50.70 the Apr (this Friday expiration) 50 put is trading at 90 cents, if you thought the company would miss and offer very disappointing forward guidance, then those puts look very cheap, with a break-even at $49.10, down about 3%. On the flip-side if you thought the stock could be up more than the implied move on better than expected results and guidance, near $52.50, then the Apr 51 call offered at $1.10 also looks dollar cheap.

I am always a little hesitant to trade directionally too early in earnings season, especially one with so much uncertainty as the one we are in now, with so many companies having had already pulled their prior guidance. But I thought this one a good one to keep an eye on given where they sit in the smartphone supply chain.