Over the last month I, as have you, have heard the term unprecedented relating to far too many aspects of our life than we would like. There has been no shortage of comparisons made by political and economic/financial markets pundits to the last unprecedented period that most Americans can remember, and that was the Financial Crisis of 2008/09. But it probably makes sense to start the comparison by what is different this time… at its onset, it was not global, started in the U.S., there were few if any direct health implications and the adverse economic effects took months if not quarters to trickle through the economy as job losses took time, as did the negative wealth effect of declining housing and stock market values.

This time around, the economic effects will be at the very least be front-loaded as Jobless Claims hit 10 million in the last two weeks with the unemployment rate going from a 50 year low at 3.5% in February to 4.4% in March with many economists expecting to see 10% in the coming months, and depending on how long the lockdown lasts as high as 30%.  The financial assistance/stimulus thrown at the current crisis in just a matter of weeks already equals the totals of QE 1,2 & 3 combined, designed to combat the financial crisis in the U.S.

As for the financial markets, from Feb 19th when global Coronavirus cases were about 75,000, primarily in China, the S&P 500 (SPX) was trading at all-time highs, to Feb 28th when the United States recorded its first death from the virus, the SPX had already declined 13%. A little more than one month from the highs, very near the recent lows on March 23rd, the SPX was down 35% and confirmed cased in the U.S. neared 45,000 with confirmed deads around 550. Some chart peeps will throw a flag at this one, but in simplest terms, this chart of the SPX vs confirmed U.S. coronavirus cases and deaths in 2020 tells the story of their interconnectivity and how the stock market has been the lens of the impending economic disaster to the response to mitigate the spread. 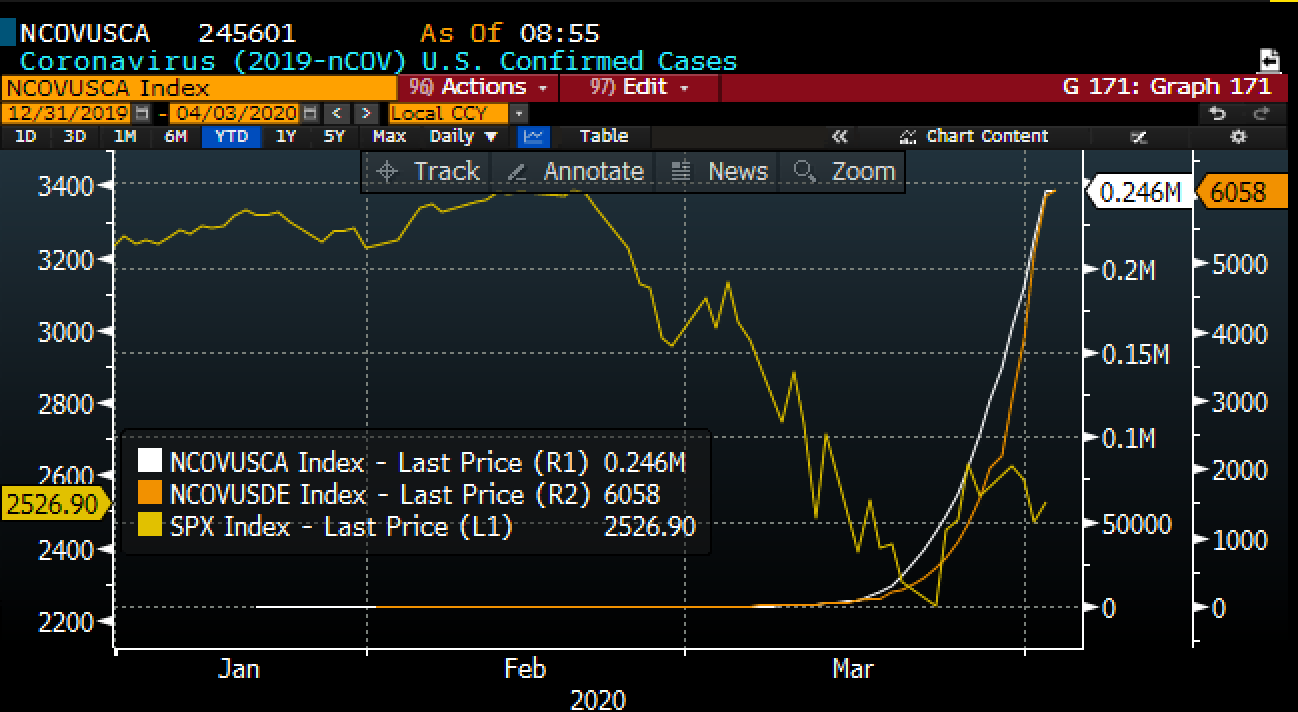 It seems very clear to most health experts that until we have mass testing for the virus, then for the antibodies, until we can on a very wide scale separate the sick from the cured, and the immune, we will not be able to reopen the economy on a wide scale.  All the data we are getting now in dense places like NYC that are hotspots for the virus are based on very limited data with much of the data coming from tests that are giving false readings suggests we are weeks away from a peak. As the testing gets better and more prevalent, the headlines on the health front are likely to get worse. But time allows for our health care system to be better prepared for what is likely to be waves of this virus prior to having vaccines and antibodies and it also allows for the hundreds of billions of financial assistance approved by Congress to make its way into displaced workers bank accounts.

Just as the stock market sniffed out the severity of the growing pandemic in February prior to many of our elected leaders, it is also likely to mark the turn in our health and economic battle prior to the data topping out in health terms and bottoming out in economic terms. But I will stick to my guns and suggest from a purely anecdotal viewpoint that coming out of this health crisis in both economic and market terms will take longer than most think, because the Fed, the Treasury, and Congress have all front-loaded their response, which means that there will be more to come, but all likely to have a lessening impact as the economy deteriorates so quickly. 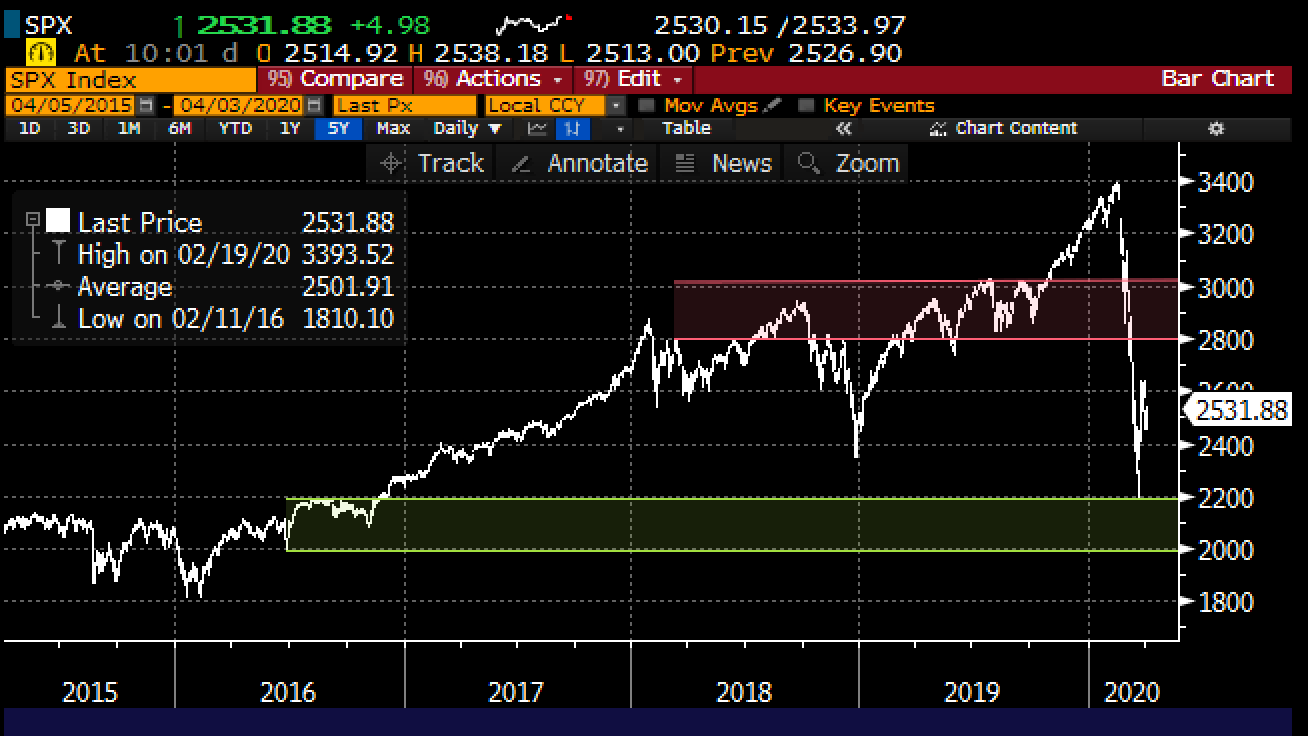 What strikes me about these ranges is 3000 on the upside was the level that the SPX broke out from in late Oct on a Fed liquidity induced rally that seemed flat out unwarranted, I would be shocked if the SPX trades above 3000 for the balance of 2020 or above 3400 in 2021. On the downside, the intraday low on March 23rd got very near the late 2016 breakout following the presidential election. What is significant about that is 2016 was a rocky year for the global economy, starting with a continued growth scare in China and rocky geopolitical events with Brexit in June and populism and nationalistic leaders and policies being voted in/enacted across the globe.

My view has also been consistent on CNBC and on RIsk Reversal to raise cash near or in the red zone and start to dollar cost average in the green zone. In Top Gun parlance, we are approaching the hard-deck and engagement should be limited, not yet in the danger zone of investing mistakes if you stay disciplined and stick to your wingman (risk management).